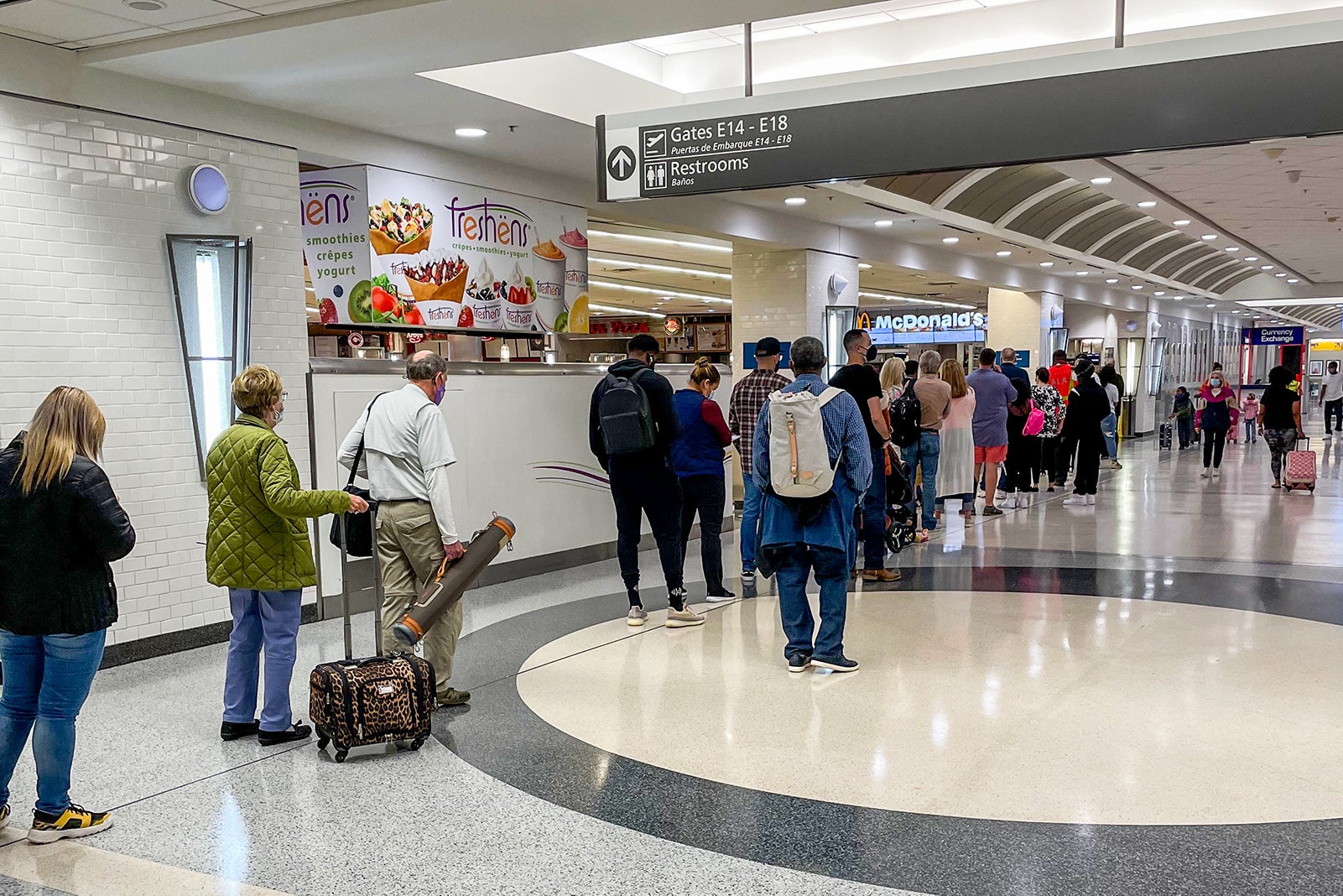 At airports nowadays, it's not unusual to wait 25 minutes in line for a cup of coffee or something to eat (or to just rely on the airline’s pretzels to hold you over until you reach your destination). Those who have traveled in the last year probably noticed that when it comes to food and drinks in the airport, the return to "normal" has not been without a few bumps.

Getting back up and running after more than two years of the COVID-19 pandemic is a challenge nearly every industry has faced, particularly when it comes to staffing. Even pilots and ground crews, who are the backbone of airline operations, aren't immune.

However, inside airport terminals, the problems have manifested in the form of continued closures of some food, drink and shopping spots or, more commonly, not being open full hours. Since travel began to rebound in the spring of 2021, the trend has led to fewer options for travelers and longer lines at the places that are open.

There are signs, though, that this could change. Some airports are trying to ensure they do, just as the Transportation Security Administration is regularly screening more than 2 million passengers per day — a seismic shift from the few hundred thousand the agency saw this time two years ago and far above 2021 numbers.

At many of the largest airports in the U.S., most restaurants and retailers are open again from the total closures experienced in the earliest days of the pandemic. There aren't too many locations still closed.

Related: Avoiding long lines at the airport and during your travels

There's a difference between a business reopening from a full shutdown and operating at full, pre-pandemic hours and at full strength, though.

Phoenix Sky Harbor International Airport (PHX) reported more than 80% of its businesses open as of late May. Yet the airport has run into problems with availability. Airport officials recently announced plans to patrol and surveil the terminals and potentially fine concessionaires not living up to their contracts, effective this month, TPG reported in May.

In Phoenix, the early morning and late-night hours continue to present particular challenges when it comes to businesses being open, airport officials explained at a public meeting last month.

In other words, you could be at the airport midday and there are plenty of places to get something to eat or drink. However, if you have a 5 a.m. flight or arrive at 11 p.m., you could run into trouble.

DEN officials, for instance, mentioned about 6% of its concessions are not operating at full contractual hours. LAX officials told TPG, “Not all concessions are operating full schedules compared with 2019,” while noting there are always options available for customers.

“We’re ready for business early in the morning," DFW executive vice president Ken Buchanan said in an interview with TPG. “Our challenge goes into the late evening hours.”

Anticipating the surge for Memorial Day weekend travel, DFW officials saw Wednesday, May 25 — just prior to the holiday weekend — as a sort of "line in the sand" for concessionaires: a deadline to open — fully — in accordance with the terms of their contracts.

“We’ve gone through the last two, two-plus years supporting our concessionaires, being as flexible as we can,” Buchanan told TPG. “Now it’s time for us to get back to business ... which means we need to be open during normal hours.”

As in Phoenix, DFW officials said there could be consequences for businesses not fully open. The airport will have "compliance specialists" patrolling the terminals in early morning and late-evening hours. Businesses found to be in violation could face a $500-per-day fine, with the potential for frequent violators to have their lease with the airport terminated.

“We don’t expect to implement any of those [consequences], but they’re available,” Buchanan said.

Of course, few businesses want to face the often-difficult decision to open late or close early.

In a May analysis, the National Restaurant Association pointed to Bureau of Labor Statistics data showing job openings between October 2021 and March 2022 outpaced hirings by half a million. This fueled a labor shortage the organization called “far and away the most severe on record.”

Hiring for restaurants can be an even greater challenge when it comes to airports, according to Phoenix airport officials, with the added inconvenience of navigating parking and going through security for a job that ultimately pays similarly to one out in the community.

DEN indicated that staffing “is the most common reason” locations might not be open full hours, while LAX pointed to the inability of some vendors to rehire staff to full capacity.

Nearly every airport TPG contacted mentioned recent job fairs it had hosted or supported to help vendors in need of people.

The Port Authority of New York and New Jersey, for instance, said it’s working closely with its partner companies to address the staffing issues and support hiring, all in hopes of ensuring staffing schedules “are aligned with travel volumes.”

Looking ahead to a busy summer

As travel numbers rebound to more "normal" levels, Buchanan said the same might soon be said for businesses on DFW’s concourses, pointing to some businesses reopening after being closed for many months.

"You see activity back in the kitchen and in the storage areas which tells you, ‘OK, they’re getting ready,’” he told TPG.

That’s not to say every business has hired for every position.

Instead, airport leaders plan to continue working with businesses to make accommodations on the days when staffing might still be a challenge.

For instance, a restaurant that doesn’t have full staffing might not be able to accommodate a full dining room with a sit-down experience on one night. In that case, they would be expected to — at a minimum — still offer to-go food options “so that customers still have choices,” Buchanan explained.

Across the country, you can expect to see a lot more innovation, too.

DFW is joining the list of airports — New York and Los Angeles among them — with apps that allow customers to have food delivered right to your gate.

I can recall restaurants at Ronald Reagan Washington National Airport (DCA) and Philadelphia International Airport (PHL) where I had a sit-down meal in a terminal restaurant but placed my food and drink orders on a tablet. This cuts down on the number of trips the waitstaff has to make to a particular table.

Related: 31 tips to keep your summer trip on track and on budget

After two-plus years of uncertainty brought on by a forever unpredictable COVID-19 situation, volatile passenger demand and lackluster staffing, some airports are beginning to put the pressure on their food and shopping vendors to not just reopen but to reopen to pre-pandemic hours.

Things likely won't change overnight, as hiring continues to be a point of concern for so many industries.

So in the meantime, if you’re hungry or thirsty while in an airport, your best friend may be your smartphone. Airports and airlines increasingly have on-the-go ordering options through their apps, and some businesses have order-ahead functions in place for airport locations; a mobile order probably saved me a 10-minute wait in a Starbucks line last month at Miami International Airport (MIA).

As with every aspect of summer 2022 travel, a little planning ahead combined with patience could be the key to making your trip as pain-free as possible.

Related stories
After 19 months, United Airlines is officially suspending flights at New York's JFK airport — again
17 ways to earn lots of Marriott Bonvoy points
Delta SkyMiles Gold Amex card review: Perfect for casual Delta travelers, now with a 65,000-mile offer
Fast-growing Viking doubles down on adventure cruising with a second expedition cruise ship
Featured image by Long line for McDonalds at the airport (Photo by Edward Pizzarello/PizzaInMotion.com)
Editorial disclaimer: Opinions expressed here are the author’s alone, not those of any bank, credit card issuer, airline or hotel chain, and have not been reviewed, approved or otherwise endorsed by any of these entities.