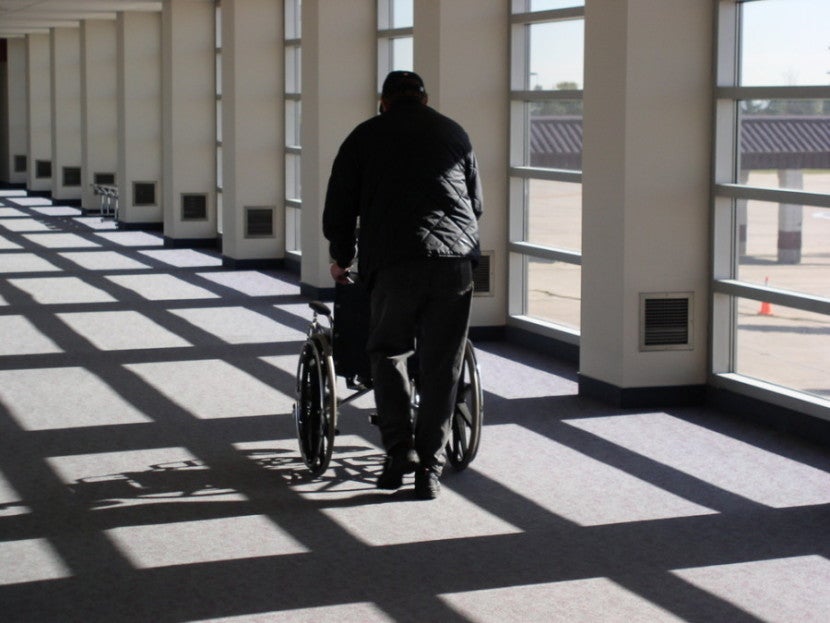 Airlines Now Required to Report on How Many Wheelchairs They Break or Lose
This post contains references to products from one or more of our advertisers. We may receive compensation when you click on links to those products. Terms apply to the offers listed on this page. For an explanation of our Advertising Policy, visit this page.

A sentence was reworded to describe Sen. Duckworth as the author of the provision requiring the DOT to implement the reporting rule within 60 days.

This week, the Department of Transportation quietly rolled out a rule requiring airlines to report in every month on how many wheelchairs and motorized scooters they break, lose or damage each month, ending a yearlong standoff between disability advocates and the federal government.

"This empowers the consumer," US Sen. Tammy Duckworth said in a telephone interview. "The airlines do break wheelchairs on a regular basis, and unlike losing your luggage — you can go out and buy new luggage — my wheels are my legs. You can't find a substitute for my wheelchair."

Duckworth, a Democrat representing Illinois, authored the relevant provision to the FAA Reauthorization Act, which President Donald Trump signed into law on Oct. 5. The act now requires airlines to file reports with the DOT detailing how many wheelchairs, motorized scooters and checked bags they mishandled the previous month. That rule became active on Dec. 4, but flyers with disabilities have long suffered from antiquated regulations and humiliating treatment.

"If you use a powered wheelchair and you're ready to book a flight, you can now look and see, on this flight from DC to Houston, that the damage rate is 40% on Delta and 10% on United or whatever it is, and make an informed decision as a consumer," Duckworth, a double amputee who uses a wheelchair, said. "This empowers the wheelchair user."

When reached for comment, airline spokespeople referred questions to Airlines for America, the industry association.

"There is an ongoing effort by A4A and our member airlines, together with disability groups and wheelchair manufacturers, to address the most efficient and safe handling and storage guidelines to reduce the number of wheelchairs damaged in air travel," A4A spokeswoman Alison McAfee said in an email. "This includes the creation of a checklist of the dimensional, performance and instructional information associated with the assistive technologies (AT); procedures and training for the handling of AT; and labeling and design specifications to encourage manufacturers to build AT suitable for transport in commercial aircraft. This information can then be effectively communicated to passengers with mobility impairments."

The new rule was originally supposed to go into effect much earlier. In 2016, under President Barack Obama, the DOT planned for the airline reporting rules to be in place in December 2018. The airlines said that didn't leave them enough time to prepare, so it was pushed back 13 months to Jan. 1, 2018. But soon after Trump came into office, the DOT shelved the rule, saying it wouldn't be implemented until Jan. 1, 2019, if not later.

Airline-industry insiders said that second extra year was necessary so that the airlines could handle technical challenges. Wheelchairs and mobility devices, for example, didn't typically get special tagging when they were checked in, making it more difficult to keep track when one of them was damaged in, or on the way to, the hold.

Duckworth called that explanation hogwash, blaming the Trump administration for bowing to the airline lobby.

"I couldn't disagree more: The rule was passed, publicly commented on and went through the regular process like every other rule," she said. "That's why I got frustrated and we had to make a legislative fix."

A Department of Transportation sokesperson didn't return a request for comment by publication time, but McAfee insisted that airlines were aware of — and addressing — the challenges wheelchair-using flyers face.

"US carriers meet or exceed all accommodation standards in Department of Transportation regulations and provide safe and comfortable air transportation to hundreds of passengers with disabilities daily," she said. "The industry is committed to offering a high level of customer service, working hard to provide a positive flight experience for all passengers — especially those in need of additional assistance."

Eric Lipp, executive director and founder of Open Doors Organization, a disability-rights group that's been working with airlines on the issue, said the rule should help everyone better understand what the issues involved are, but that it won't solve everything.

The amendment to the FAA Reauthorization Act didn't enact certain changes disability advocates have long sought, like givingpeople with disabilities the right to sue airlines when their rights are violated, or improving the laborious process involved when an airline is found at fault — currently, it's essentially an internal, bureaucratic affair within the DOT, rather than the Department of Justice, and it can take months or years for disabled passengers to get what they say is often inadequate compensation.

"It's a first step, but not enough," Kelly Buckland, executive director of the National Council on Independent Living, a disability-rights organization, said of the new reporting rule. "Reporting is one thing, being accountable is another."

"This is a first good step, and now we have the draft to push for subsequent steps, and we'll start to see the results next month," Duckworth said. "And over the next few months, as we start to see the data, it will be more clear."

Featured image by Image courtesy of <a href="http://www.shutterstock.com/pic-568219/stock-photo-skycap-brings-a-wheelchair-to-a-traveler-needing-assistance.html?src=hW7yU4OlYBCc29gH3mz3Mw-1-13">Shutterstock</a>