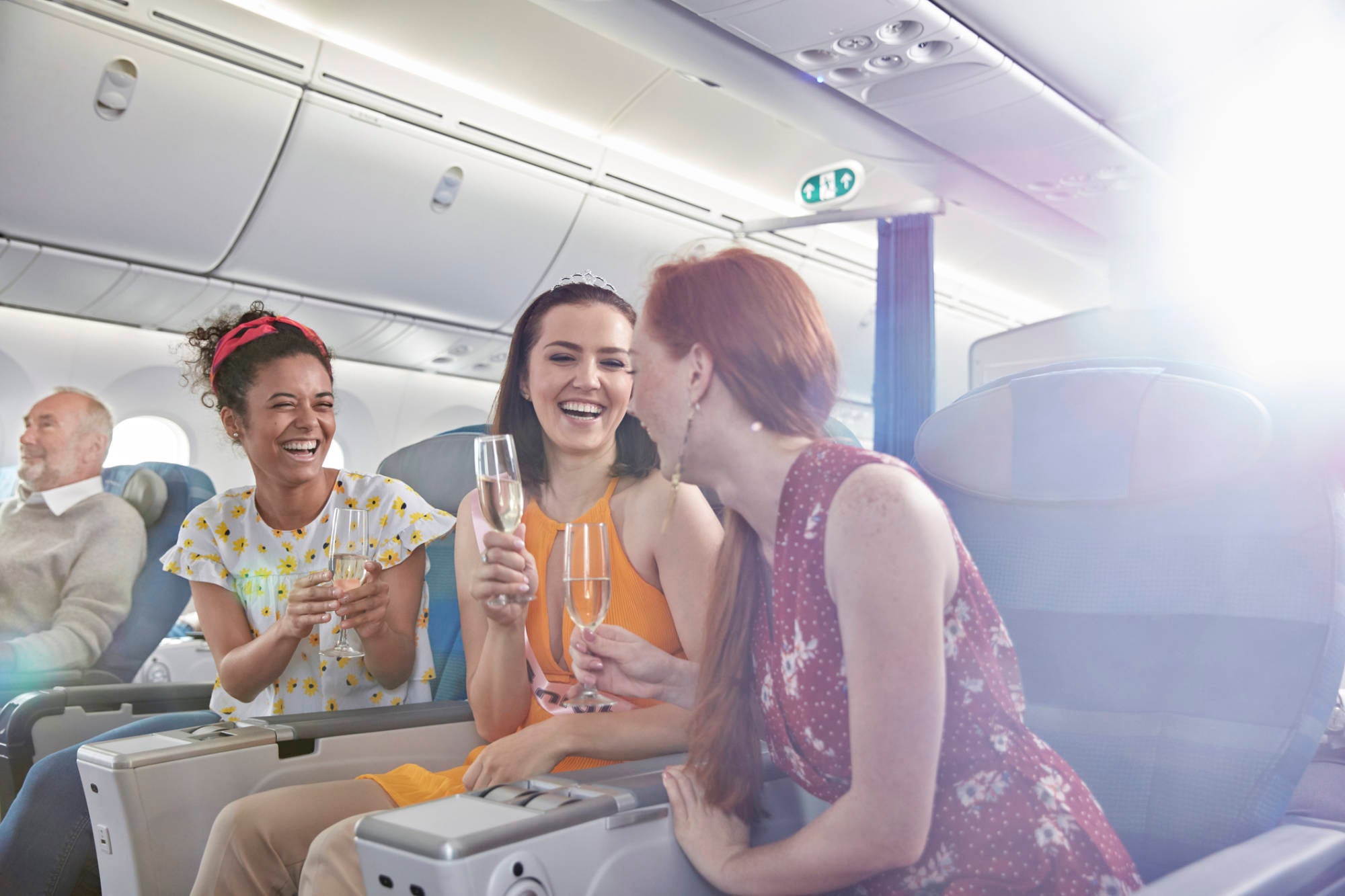 What's the drinking age on international flights?
This post contains references to products from one or more of our advertisers. We may receive compensation when you click on links to those products. Terms apply to the offers listed on this page. For an explanation of our Advertising Policy, visit this page.

This month marks the 70th anniversary of an event that changed flying as we know it. But if you want to mark this seminal moment in aviation, you probably won't find an observance at the National Air and Space Museum. Instead, try an airport bar.

In October 1949, Northwest Airlines became the first airline to serve alcohol aboard its flights. Since then, the preflight drink in first class, the free beverage on an international flight and the post-dinner nightcap have become enduring (although sometimes problematic) rituals of flying.

If you're old enough to partake.

Since that first in-flight drink was poured during the Truman Administration, the minimum legal drinking age in the United States has gone from 18 years old in some states to a nationwide standard of 21. But as almost any American college student who's studied abroad can tell you, many other countries still cling to that lower drinking age of 18.

That poses an interesting question for teen travelers: At what age can a young adult passenger legally imbibe while flying outside of the United States? Can an 18-year-old American enjoy a gin and tonic while flying overseas?

The Points Guy contacted several airlines to find out. Turns out, the answer — involving the intersection of law and policy at 30,000 feet over multiple borders — is complicated.

If you're under 21, U.S. carriers are a no-drinking zone

The FAA doesn't police in-flight drinking, but airlines certainly do and typically follow the laws of the country in which they're based. For travelers, that means no matter the drinking age of the country you're in or over or en route to a U.S.-based airline won't serve alcohol to any passenger under 21.

"As a U.S.-registered carrier, the drinking age is 21," a spokesperson for American Airlines confirmed to TPG in an email.

Said Delta: "Delta uses the age of 21 as the threshold to serve customers alcohol on all flights."

The story was the same at United: "Customers must be 21 or older to consume alcohol on all flights," a policy you can also find on the airline's website.

So even when Delta starts flying people to Mars, the drinking age on that 300-million-mile flight likely will still be 21.

International carriers are a different story

Foreign carriers based in countries with a lower legal drinking age generally follow the policies of their home countries on board.

"In Mexico, the legal drinking age and official adulthood age is 18 years old," a spokesperson for Aeromexico told TPG in an email. "So on board our flights, any 18-year-old citizen, regardless of their nationality, is allowed to drink, as long as they show an official and valid ID (in this case, a passport)."

"As a U.K.-registered airline, we are regulated by the British Laws," Virgin Atlantic told TPG. "[We have an] age limit of 18 years for alcohol and tobacco consumption and sales. This applies to all routes that we serve." (Virgin Atlantic passengers who don't want to drink alcohol have some interesting alternatives.)

Lufthansa and British Airways also told TPG they have a drinking age of 18.

Just because you're flying on an international carrier, however, don't assume the drinking age is 18.

"For any international flights, ANA follows the rule of law in Japan with the legal drinking age being 20 years old for our passengers," a spokesperson for Tokyo-based All Nippon Airways told TPG.

Finnair has an even more complicated drinking age that's based on what you're drinking. The Finland-based carrier tells TPG that passengers between the ages of 18 and 21 can only buy drinks onboard that are less than 22% alcohol. That covers most beers and wines. For the hard stuff — drinks that are 22% alcohol or more — Finnair's drinking age is a very American 21.

If you're under 21 and want to drink on an airplane traveling outside the U.S., you're out of luck if you're flying on United, Delta, American or any other U.S.-based airline. But yes, you can find lower drinking ages on some airlines based elsewhere (emphasis on "some;" certain airlines don't serve alcohol at all).

Just be sure to confirm the airline's drinking age beforehand. And have your passport handy in case the flight attendant cards you.

One more tip: Drinking to excess on a plane at any age can lead to trouble. So if you're going to toast 70 years of mile-high drinking, please do so responsibly.