7 underrated regions in Italy with the best food and wine

Articles
Lori Zaino is a writer for TPG and TPG UK covering travel, news, points and miles and more. She's been based in Madrid, Spain almost 15 years and is an expert in travel throughout destinations such as Europe, Southeast Asia and Africa.
Follow
July 26, 2022
•
10 min read 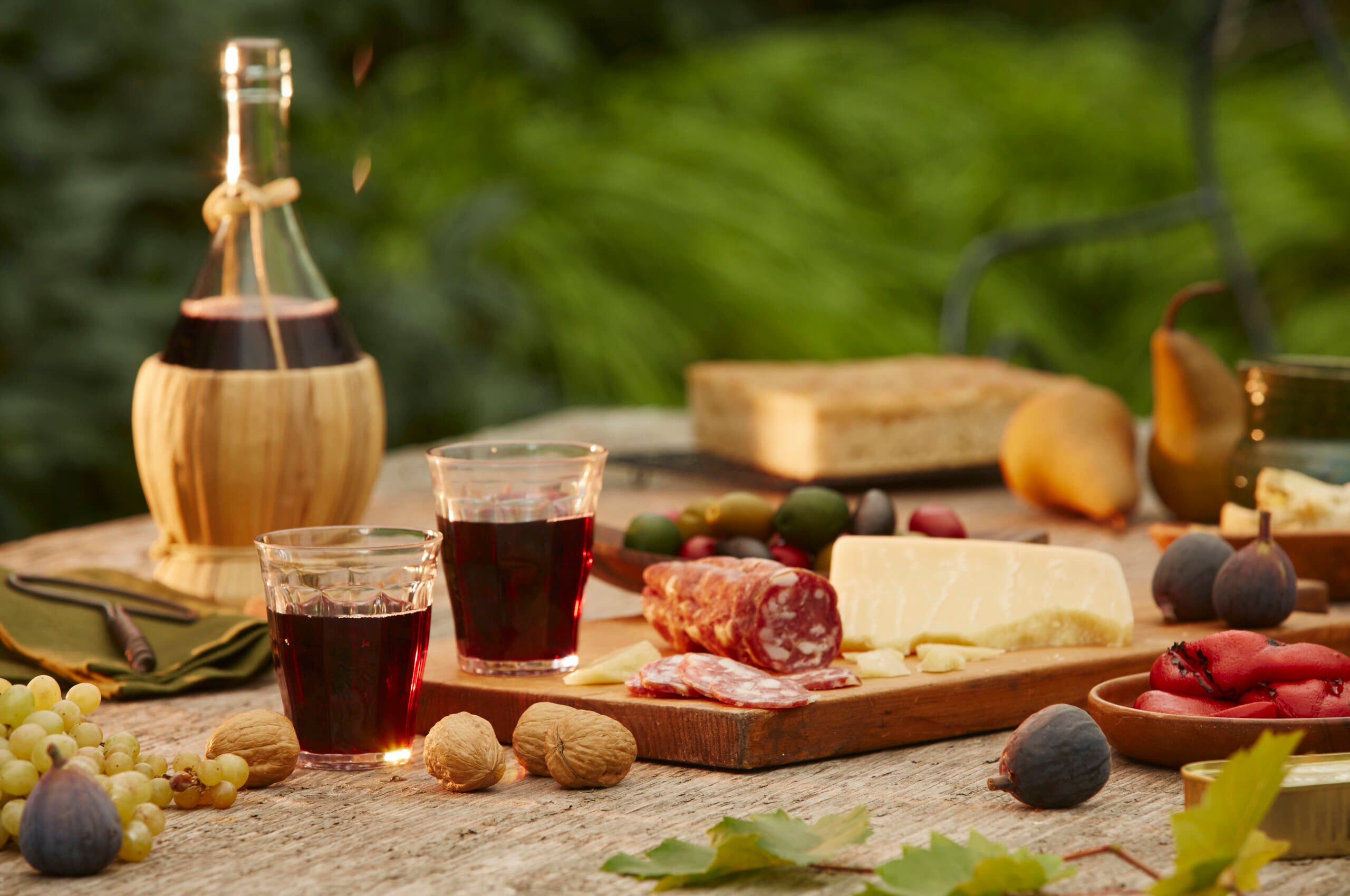 Italy is one of the world's top destinations for gastronomy. The country’s culinary delights extend well beyond just pizza, pasta and Chianti wine.

For more travel tips, news and advice, subscribe to our free daily newsletter.

We’re definitely not discounting a trip to Rome to indulge in a hearty plate of cacio e pepe (cheese and pepper pasta); sipping a foamy cappuccino in one of Florence’s bustling squares; or splurging on a fancy dinner out in Milan (the Lombardy region has close to 60 restaurants with Michelin stars).

But if you want to delve deeper into Italy’s world-renowned food and wine scene, consider a vacation to one of these lesser-visited regions for a more local and traditional epicurean experience.

This northern Italian region is home to some of Italy’s best cuisine.

Start in the city of Bologna, which is known as Italy's gastronomy capital. It's affectionally nicknamed La Grassa (the fat lady) by Italians thanks to its ragu, a tomato-and-meat-based gravy sauce often piled upon pizza or used in lasagna. It's also known as Bolognese sauce.

The hill town of Parma is where some of the country’s best prosciutto (dried, cured ham) comes from. The ham is buttery and smooth — don’t remove the fat, which gives it all the flavor. Pair the ham with fan-favorite Parmigiano Reggiano, a bold, cured cheese that also comes from the region.

And let’s not forget about sharp balsamic vinegar often drizzled over the popular cheese, which hails from Modena.

Quench your thirst with a sparkling Lambrusco wine, which is cultivated in various vineyards scattered around the Emilia Romagna region.

I’ll never forget watching “Chef’s Table” on Netflix (season 4, episode 2) when chef Corrado Assenza explains how his family-owned pastry and coffee shop Caffè Sicilia in Noto has evolved over the years (it’s been open for more than a century).

By the time the episode had finished, I’d already booked my flights to Catania, dreaming of cannoli, cassata (a ricotta-based cake) and the shop’s specialty: warm brioche bread paired with either almond or lemon granita (a type of Italian ice), often eaten for breakfast during the warmer months.

I couldn’t have been the first visitor at Caffè Sicilia to order nine different desserts in one sitting, comparing and sampling each in wonder.

The rest of Sicily’s food scene brought me equal amounts of joy (and less of a sugar high, thankfully).

Sicilian pistachios are everywhere: in pastries, encrusted and sauteed on sea bass and ground into pesto with lemon, garlic, basil and cheese. Pair a dish of pasta alla norma (pasta topped with aubergine, tomato and pecorino or ricotta) with a full-bodied glass of Nero D’Avola wine.

Related: The most beautiful villages in Sicily

Move over, Tuscany. Piedmont is the up-and-coming destination for food in Italy.

Its city of Bra is home to the Slow Food Headquarters, an organization responsible for protecting and promoting local food growers, farmers and traditional flavors — there’s even a slow food university to train chefs and other food professionals.

Exploring some of Piedmont’s smaller towns and wine villages will introduce you to the best slow food — local, seasonal ingredients, eco-friendly wines and age-old recipes.

Some of the region’s best cuisine (think: signature white truffles, grissini, which are breadsticks and rich Barolo wines) is more traditional. However, parts of the region, such as Turin, are emerging as newer and more creative culinary destinations.

Although one of the area's most innovative restaurants (the Michelin-starred Combal.Zero, helmed by chef Davide Scabin) is now closed down indefinitely, it set the tone for the region to begin testing out more modern and experimental takes on traditional Italian fare.

This crescent-shaped region is home to more than just Cinqueterre. Perhaps you’ve eaten focaccia bread or pesto? Both hail from Liguria.

Liguria’s mineral-rich soil is ideal for growing herbs, meaning much of the food you’ll find there is flavored with rosemary, fennel, sage and basil, which brings us to pesto.

Pesto is actually just a nickname for pesto alla Genovese, thanks to the sauce’s origins in Genoa, the capital of Liguria. You can spread the green basil-based sauce on pretty much anything and everything for a burst of flavor.

Farinata, a type of tart made from chickpea flour and olive oil, is another food typical of the region. Whatever you eat in Liguria, you may as well douse it with olive oil.

This particular region’s oil is made with the Taggiasca olive, creating an extra virgin variety that is light and flavorful, but not overbearing as to mask the taste of the food. It’s often paired with seafood, so you can enjoy it with fresh fish while soaking up the beauty of the Italian Riviera.

Parts of this region may not be considered lesser-visited but we simply couldn’t leave Campania off the list.

Starting with Naples and its famous pizza, the city actually has its own pizza police: the Associazione Verace Pizza Napoletana. This group certifies pizzerias and gives them the official go-ahead to make authentic Neapolitan pizza.

The pizza differs from other varieties because it’s cooked in a wood-burning oven for about a minute at 800 degrees Fahrenheit. This ensures the crust is soft and malleable and the mozzarella cheese is perfectly melted.

The region is also famous for its citrus fruits, especially Sorrento lemons.

As you weave through the Amalfi Coast, you’ll taste the lemon in almost everything you eat, zested into a chicken or seafood dish, in gelato, cookies and, of course, limoncello.

If limoncello isn’t your thing, sample one of Italy’s most underrated red wines, Aglianico, or opt for a variety cultivated along the steep, sloping vineyards of Neapolitan volcano Mount Vesuvius, Lacryma Christi wine (this literally translates to tears of Christ).

Related: How to plan a trip Italy’s Amalfi Coast without breaking the bank

Forming the southern heel of Italy’s boot, this region is known for gorgeous villages and seaside towns, endless olive groves and rolling vineyards and countryside.

The south of Italy moves at a slower pace, ensuring you’ll have plenty of time to indulge in long, leisurely meals.

Dining in areas with fewer tourists may mean you won't be charged a coperto — a surcharge to sit and eat at the restaurant (often higher if you’re sitting outside). You can also avoid this by standing at the bar for your coffee instead of sitting.

If you’re visiting during the heat of summer, make sure to sample friselle, a cracker-style bread that’s baked and toasted, topped with tomato, olive oil, garlic and salt.

Another must-have is bread made in the village of Altamura. Created from durum wheat flour and baked in a wood oven, this round, large bread is one of the few in the world with a DOP status (Protected Designation of Origin). The recipe is rumored to date back to the Middle Ages.

Puglians also love antipasti (starters), so don’t be surprised to see many on the menu, including items like stuffed, grilled or fried vegetables, local cheeses and soufflés.

Most people know about Tuscany. Fewer are familiar with the region to its southeast: Umbria.

The small, landlocked area is known as one of the greener areas of the country, as it's covered with vineyards and forests.

Carnivores should head to Norcia, known as the pork capital of Italy. Here, you can enjoy cured meats like ham (prosciutto di Norcia is especially famous), salami and even wild boar, as well as other types of charcuterie.

Visitors can also head into the woods to truffle hunt, or simply enjoy the specialty Tartufo grated on pasta, sauteed with eggs or even used to flavor the aforementioned meats and Umbrian caciotta cheese.

Various types of birds live in the woods here, so don’t be surprised to find items like pheasant stew or quail ragu on an Umbrian restaurant menu.

For dessert, sample something sweet at the Perugina Chocolate Factory. Umbria is also home to more than 10 wine regions, harvesting Sangiovese and Sagrantino (one of Italy's most tannic varieties), among others.

However, diving into some of the country’s lesser-visited regions may ensure you get a taste of true Italian ingredients and classic recipes.

Whether it be pork in Umbria, truffles in Piedmont or pizza in Campania, get ready to discover some of the world’s best cuisine in Italy — with wines to match.

Read on for more Italy inspiration: