TPG editor’s choice award: Why Greece is the top travel destination of the year 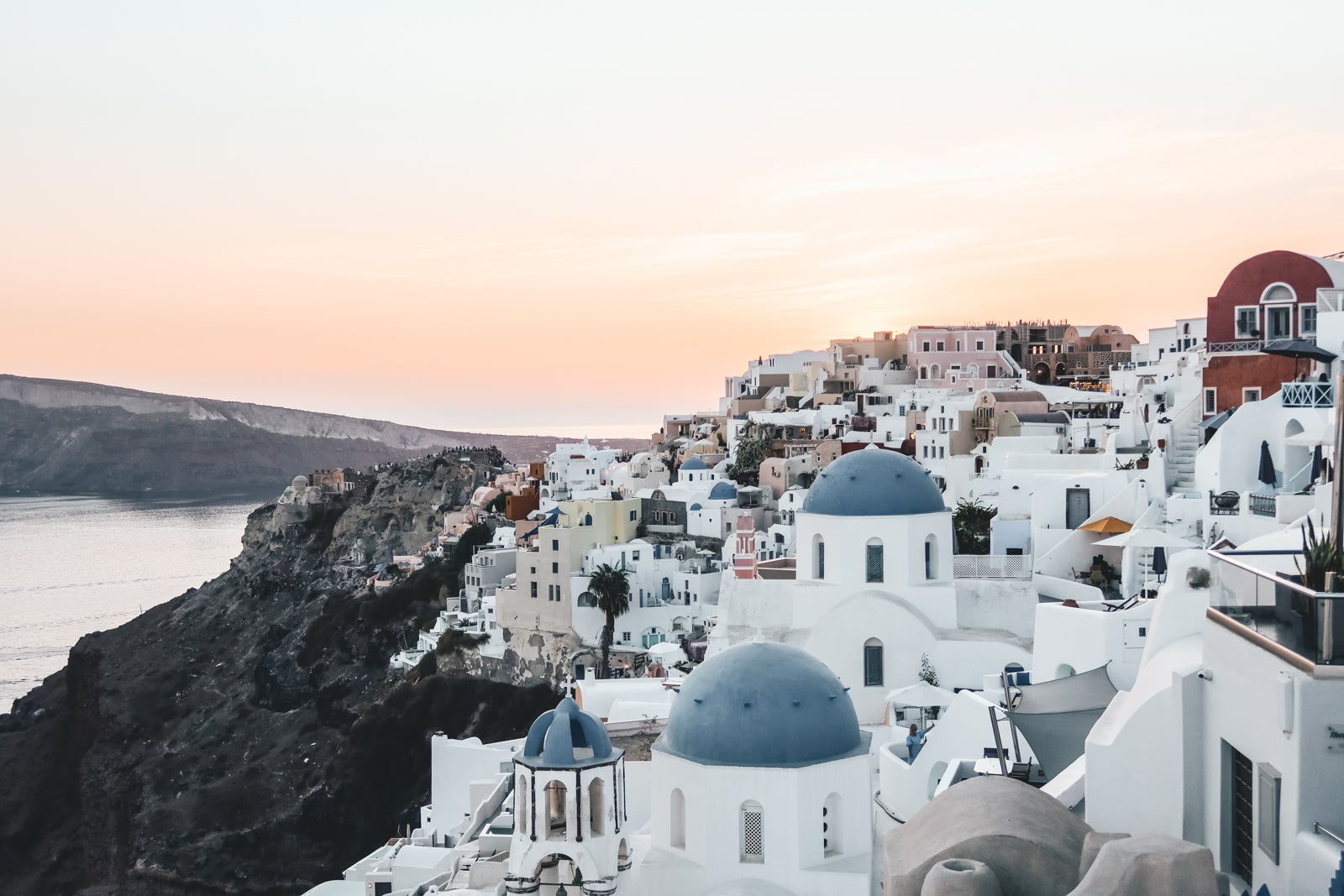 At a time when the world was still mostly locked down — when the idea of flying abroad for a relaxing vacation seemed like some distant, surreal dream – a handful of destinations were busy finding ways to bring travel back.

Destinations that rely heavily on tourism were, understandably, among the first to develop reopening policies and procedures to allow travelers from around the world to safely return.

Many countries introduced rigorous COVID-19 testing and quarantine requirements, in some cases with entry procedures so arduous they seemed designed to deter travelers rather than facilitate a safe arrival.

Others managed to strike a balance between safety and simplicity, implementing coronavirus-prevention policies that would protect both locals and travelers without making the steps unnecessarily onerous.

In mid-May 2021, Greece reopened its borders to tourists who could show proof of either a negative COVID-19 test, full vaccination or recovery. Travelers also had to complete a passenger locator form before arrival in the country. There was a clear policy for children who were not old enough to be vaccinated, too.

Greece, of course, wasn't the only country relying upon COVID-19 tests, passenger locator forms and proof of vaccination to screen incoming arrivals. But it managed to do so without making the rules so complex that they were unmanageable.

[pullquote source="Katie Genter, senior writer"]I visited Athens, Naxos and Santorini this summer to replicate a trip I'd taken in 2015. Athens had far fewer tourists when I visited, so I had many sites [essentially] to myself this time ... Naxos had plenty of tourists, as did Santorini .... but since I'd visited Paris before Greece, I was impressed by just how cheaply I could eat in all three Greek destinations.[/pullquote]

Partnering with the cruise industry

Greece also supported the cruise industry when large passenger vessels were forbidden in most parts of the world.

In fact, Maria Deligianni, national director of the eastern Mediterranean for Cruise Lines International Association, the cruise industry's leading trade group, told TPG the cruise industry and Greece have had a “deep and meaningful cooperation” since the onset of the pandemic.

According to Deligianni, when cruise ships were stranded at sea and borders were quickly closing in March 2020, authorities in Greece helped the cruise industry get provisions to crew members on board.

Greece recognized "the value of the [cruise] industry ... [and] offering this humanitarian effort in a moment of crisis,” Deligianni said.

CLIA then worked closely with the Greek government to restart cruise operations there, noting that Greece was one of the first countries in Europe to reopen for cruising.

Greece has always been a popular cruise destination (the third-most-popular in Europe, according to Deligianni), and when ships took to the Aegean and the Mediterranean again, there were strict protocols in place to prevent a COVID-19 outbreak. There were also procedures for disembarking a passenger who might test positive to avoid an entire vessel getting stranded with nowhere to dock.

[pullquote source="Sophia Fen, director of paid media"]In August I visited Greece for the second time [and] absolutely loved it. [We] rented a sailboat and sailed between islands (Koufonisia, Syros and Naxos) for a week and ended with a couple days in Athens. Staying on a boat made everyone feel extra safe as it was just my family and the captain ... Most people (especially on the islands) were so happy to have tourists.[/pullquote]

Despite getting a late start to the season this year, CLIA anticipates Greece will end the year with about 50% of the cruise ship calls it saw in 2019, when roughly 5 million cruise passengers sailed there (of some 33 million tourists in total).

At least 28 cruise ships from CLIA members will sail to Greece this year, and 21 ships have made their home ports Greek ones. It’s a testament to the deep partnerships between Greek tourism officials, the Greek government, the cruise industry and the travel industry at large.

This spring, as cruising ramped back up in fits and starts, it made a splash in Greece, which became the epicenter of the current tourism industry.

“The positive economic impact that tourism brings to our country cannot be underestimated,” former Greek tourism minister Haris Theoharis said in a March 2021 statement announcing the return of Celebrity Cruises.

[pullquote source="Ashley Kosciolek, cruise writer"]Greece is stunning, and I was impressed that each island has its own personality — Santorini for the views, Mykonos for the nightlife, Rhodes for the charm. It's also the place to be for cruises this year since most of Europe is only just opening up. The people were friendly, the food was delicious ... [and] locals tell me now — before travel fully returns — is the time to go if you want to deal with fewer people."[/pullquote]

But cruising wasn't the only way for travelers to experience Greece this year. TPG editors from across the country (and the pond) found vacation salvation in Greece. Despite the pandemic, there was a flurry of exciting travel industry developments on land, too.

Onefinestay, the luxury home and villa rental brand, launched a new collection of villas in Mykonos and Santorini. In May, an all-suite and villa hotel (designed by the architect responsible for Mykonos Airport), Kalesma Mykonos, welcomed its first guests. The following month, Banyan Tree debuted its first-ever European property in Corfu. And in September, Marriott added Domes of Corfu to its Autograph Collection, making it available to travelers with a stash of Marriott Bonvoy points.

There are already promising developments on the docket next year for travelers eyeing a Greek getaway as well. Low-cost airlines Easyjet and Jet2 are adding roughly 1.5 million seats to Greece next summer compared to 2019, with destinations including Corfu, Kos and Santorini. On the luxury end, One&Only is preparing to open a resort on the Athenian Riviera.

[pullquote source="Stella Shon, writer"]I finally made it to Greece for the first time ever this year ... I visited mainland Greece, where I visited my best friend's village of Kalamata (yes, where the olives are from) and Zakynthos. There's so much to love about Greece, whether it's the dry weather or the dry Assyrtiko, a delicious white wine. I’m already planning a trip to go back to Greece next year because there’s just simply so much that I didn’t get to see.[/pullquote]

The accolades for Greece aren’t limited to the TPG Awards, either.

In April, the World Trade and Tourism Council lauded Greece as a “champion” of COVID-19 crisis management for being an exemplary example of safely reopening to tourism during the pandemic, the Athens-Macedonian News Agency reported.

Theoharis accepted the award, saying, “[Greece] managed to keep the national tourism product alive during a difficult period without precedent. And at the same time, we have managed to keep alive the hope for millions of people around the world.”

Greece also has managed to welcome more than 6 million tourists between the beginning of the year and now, according to Schengenvisainfo.com, with arrivals at 86% of 2019 numbers.

“It was one of the first countries to announce that it would receive visitors who were fully vaccinated or could show a negative [COVID-19 test] to pass through the country’s gates. Greece was the country that encouraged the safe arrival of travelers, as a result of the general preparation of the country,” Elena Corina Rodriguez, the WTTC's communications executive, told Greek news agency ANA, Schengenvisainfo.com reported.

Challenges (and hope) ahead

Of course, the coronavirus pandemic remains an urgent concern, and despite Greece's many triumphs, there are still hurdles ahead for the tourism leader of the year. Reuters reported that Greece is facing record-high coronavirus case numbers right now, leading officials to implement strict new requirements at restaurants, cafes and shops, among other establishments.

The wildfires that ravaged Greece this year also were a devastating reminder of how much work must be done to keep climate change from upending the nation's tourism successes.

But Greece is not alone in this. The ongoing pandemic and the worsening climate crisis are hurdles all nations must be prepared to face as we close out one of the most challenging years on record and look ahead to 2022 with a renewed sense of optimism and resilience.

Given Greece's deftness at meeting the difficulties presented by the COVID-19 pandemic already, the country stands a strong chance of reemerging as an even more compelling destination than before.

Related stories
Act fast: Get $20 in Starbucks eGift credit when you purchase at least $250 in Delta gift cards
Top 6 mistakes every points and miles beginner makes
A solid option for American loyalists: AAdvantage Aviator World Elite Business Mastercard review
Is the Amex Business Platinum worth the annual fee?
Featured image by (Photo by Benjamin Smithson/The Points Guy)
Editorial disclaimer: Opinions expressed here are the author’s alone, not those of any bank, credit card issuer, airline or hotel chain, and have not been reviewed, approved or otherwise endorsed by any of these entities.