Articles
Darren Murph holds a Guinness World Record as the planet's most prolific professional blogger. He's an explorer at heart, having traversed nearly 50 countries and all 50 US states. He's flown over one million miles on Delta alone, and serves as a senior writer at TPG.
Follow
Nov. 11, 2018
•
12 min read 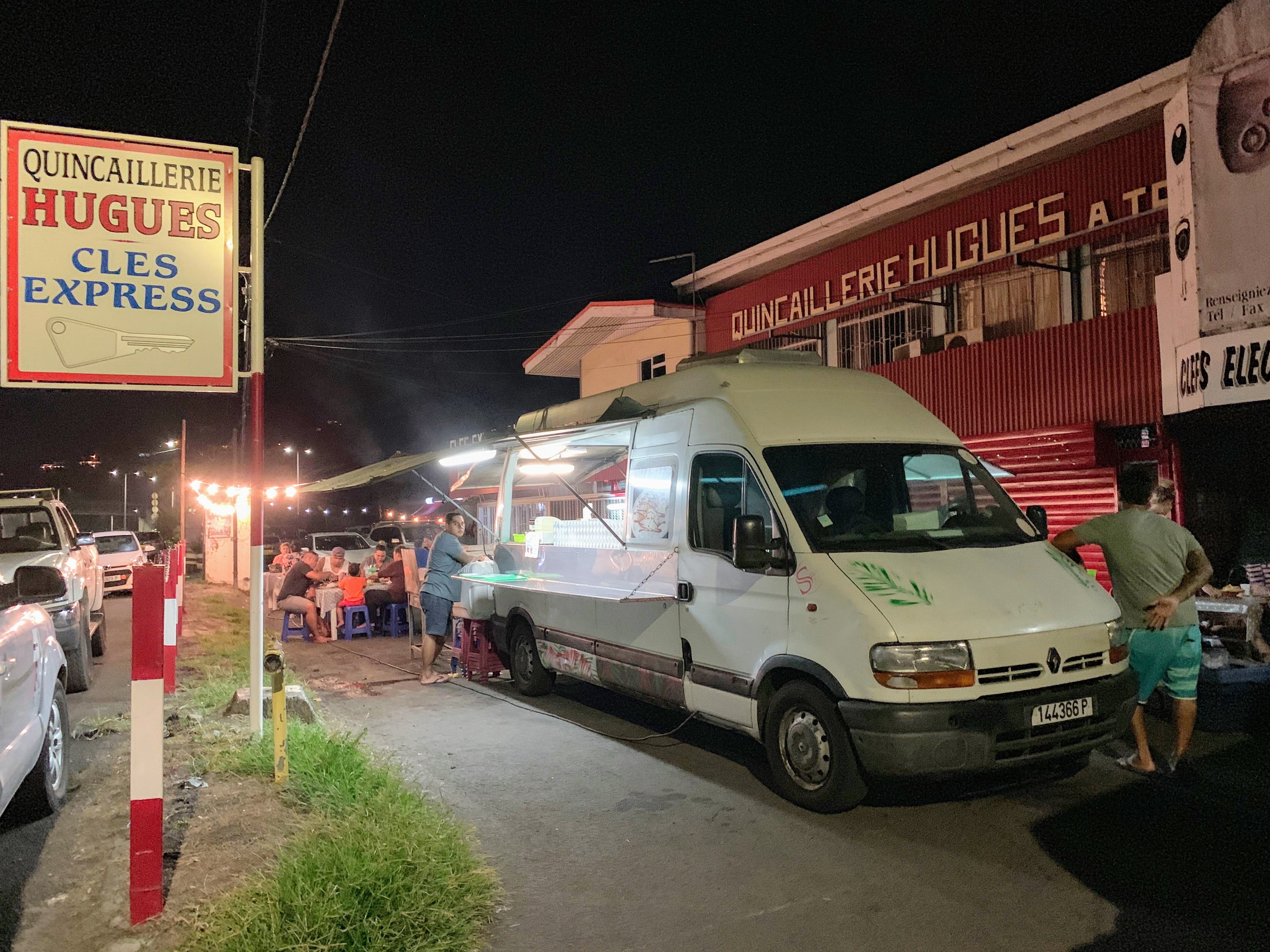 Food trucks are everywhere these days: Head to the Civic Center area of San Francisco during lunch and you’ll find everything from southern fried chicken to burritos to pad thai. Cruise along the beaches of Los Angeles county and you’ll find it tough to chose due to the dizzying area of options. Circumnavigate any of the Hawaiian islands and you’ll be tempted with shrimp trucks galore.

But there’s one place in the known universe where food trucks aren’t just a trend, but a staple of life. A vital piece of the very fabric of a community. That place is Tahiti, French Polynesia.

Do even cursory research on the islands of Polynesia and you’re bound to find intel pointing to the astronomical food prices. But what most folks don’t realize is that these prices are typically resort prices.

I just returned from a weeklong stay across Tahiti and Moorea, shacking up in three separate resorts along the way. (If you’re planning a trip to paradise, be sure to read my forthcoming reviews on the Hilton Moorea Lagoon Resort and Spa, InterContinental Resort and Spa Moorea and Manava Suite Resort Tahiti.)

One thing that proved true across all three properties? Food is comically expensive. The dishes you see above cost nearly $80 combined.

It’s nothing to drop $20 on a basic salad. If you’re looking for fresh fish at a romantic restaurant for dinner, that’ll be $30 minimum, and most likely closer to $50. Rum cocktails and Mai Tais will set you back $18 a pop. Suddenly, starving starts to look like a real possibility.

Real Polynesia, however, isn’t in the resorts. I’ve been fortunate to have visited French Polynesia four times and have flown Air France back to Los Angeles (LAX) each time. Due to the early morning departure from Papeete (PPT), my wife and I have stayed in Tahiti the evening prior each time. (I'll soon publish reviews from this flight (AF77) in both premium economy and business.)

While it’s exhilarating and intoxicating to escape to places like Moorea, Taha’a, Raitiea and Bora Bora, there’s something so satisfying about coming back to Papeete for a hearty dose of culture before returning to reality. A critical part of this cultural immersion is the roulottes, or food trucks.

Where to find Tahiti’s food trucks, and what to order

Each evening at 6:00pm, Place Vai'ete in the heart of Papeete lights up, not to mention a host of smaller parking lots that dot the coastline of Tahiti. A host of trucks roll in and within a few minutes Downtown begins to look like a concert is being thrown by 311, Snoop Dogg and Cypress Hill. Fret not: the stockpile of smoke is being generated by a litany of grills, all of which are now cooking up something delicious for the masses.

If you want the grandest experience, head to Papeete. Dozens upon dozens of trucks park side by side, offering up Asian cuisine, steaks, chicken, fries, poisson cru and whatever the freshest catch of the day is. Poisson cru is a Tahitian speciality – essentially raw fish served with coconut milk and cold vegetables such as shredded carrots and cucumber. If you like poke, or sushi, chances are very high that you’ll find poisson cru irresistible. Tahitians take great pride in the preparation and will only serve you the freshest of the fresh from these trucks.

All food trucks are counter service. You go up to the truck, place your order (oftentimes with the person who is also doing the cooking) and take your grub to your table. Easy-peasy. While many trucks have English menus, it’s never a bad idea to use Google Translate’s camera app to see real-time translations.

I’ll caution you now: order one plate per two people. On my most recent visit to Tahiti, I ordered a single plate that included a cut of grilled fish, french fries and a serving of poisson cru. I received an entire fish, the equivalent of three large McDonald’s fries and a bowl of poisson cru so overflowing that it toppled over when we tried to get dig into it. Also included was a massive bowl of bread. Because, France.

Oh, and the prices. That plate I mentioned above cost me 1,600xpf, or roughly $16 USD. It was easily enough food to feed three people and I have to reiterate that every morsel of both fish dishes were as fresh as could be. I’m talking caught-that-afternoon fresh. Try finding something similar for ~$5 to $6 per person at any other city in the world, let alone an outpost in the middle of the ocean. Go on, I'll wait.

If possible, save room for a crepe. Not every food truck in Tahiti has a dessert menu, but if you find one that specializes in crepes, you’re in for a treat. I recently chased the aforementioned feast with a “Super Aito” crepe, which included Nutella, banana and a “famous cookie.” For 800xpf (around $8), it generated a kind of bliss only thought possible in the movies.

Sadly, Tahitian food trucks have yet to embrace credit cards, so don’t expect 3x Ultimate Rewards by using your Chase Sapphire Reserve. Make sure you hit the ATM beforehand, or exchange your own currency for Pacific Francs before venturing out.

Where should I overnight in Tahiti?

For many traveling onward (or returning from) one of French Polynesia’s many picturesque islands, a night in Tahiti is a requirement. Due to the timings of flights into and out of PPT, many folks find it necessary to either remain in Tahiti for a night before continuing to their eventual destination or – as in my case – need to spend a night in Tahiti in order to be at PPT early the next morning for a return trip home.

While you’ve many options near Fa'a'ā International Airport (PPT), I’d narrow it down to two places if soaking in a night of culture via food truck sounds appealing.

For the budget set, there’s Fare Suisse. This small hotel is operated by a man I only know by a single name – Beni – but offers three huge perks. First off, a night here is cheap. On my past two trips, I’ve paid Beni around €85 (~$96) per night for a room. These rooms are basic, yes, but they’re clean, Wi-Fi is included, showers are hot and there’s even an optional breakfast for around $10 per person. Beni will happily accept Euros, Pacific Francs and US dollars.

Additionally, each stay includes two free transfers. Beni will pick you up from the airport or the ferry dock and bring you to his place and he’ll also take you to the airport or ferry after you check out. Given that taxis generally run between 2,000xpf ($20) and 3,000xpf ($30) for each of these treks, that’s massive savings.

Lastly, Beni’s place is a quick five minute walk from the main park in downtown Papeete (Place Vai'ete), ensuring that you’re just a hop, skip and a jump away from a delightful evening scouring the town’s food truck options.

For those willing to splurge, spending $250 or more for a night in Tahiti, there’s Manava Suites Resort. It’s a quick 12-minute taxi ride from the airport and it offers enormous rooms with a rainfall shower head, a kitchenette, a living room and one of the most mind-blowing pools this side of the international date line.

Manava is perfectly positioned to take in sunsets as the sun lowers itself behind nearby Moorea. You can enhance the experience further by resting on the ledge of this resort’s otherworldly infinity pool, which is built to look directly at said sunset. It’s one of the more magical experiences in all of Polynesia, and you quickly forget that you’re staying in the busiest city in the entire archipelago. (For more on this property, you can read my full review soon!)

Once you’ve processed the insane sunset you just witnessed, exit the hotel lobby, hang a left, walk approximately a tenth of a mile and hang another left. There, you’ll find a parking lot with a handful of food trucks serving up food much the same way as the roulottes back in Papeete. On your walk back to the hotel, you’ll see a truck on the opposite side of the street with a big painting of a crepe on it. If you’re feeling particularly fancy, that’s where you order the Super Aito and hang on for dear life.

A single night in Tahiti won’t make you an expert on Polynesian culture, but dining as the locals do will definitely put a memorable spin on your next trip to paradise.

Whenever you're booking travel to faraway, exotic destination like Moorea, be sure to use a credit card with trip cancellation and interruption production.

To learn more about using points and miles to access French Polynesia, check out our guides below.