Everything you need to know about 'luxury startup' Starlux Airlines

Articles
Ethan Steinberg has been a frequent flier for as long as he can remember. He went from studying abroad in Paris to moving to Shanghai after graduating college, where he covered all things travel in the Asia-Pacific region for TPG.
Jan. 14, 2020
•
8 min read 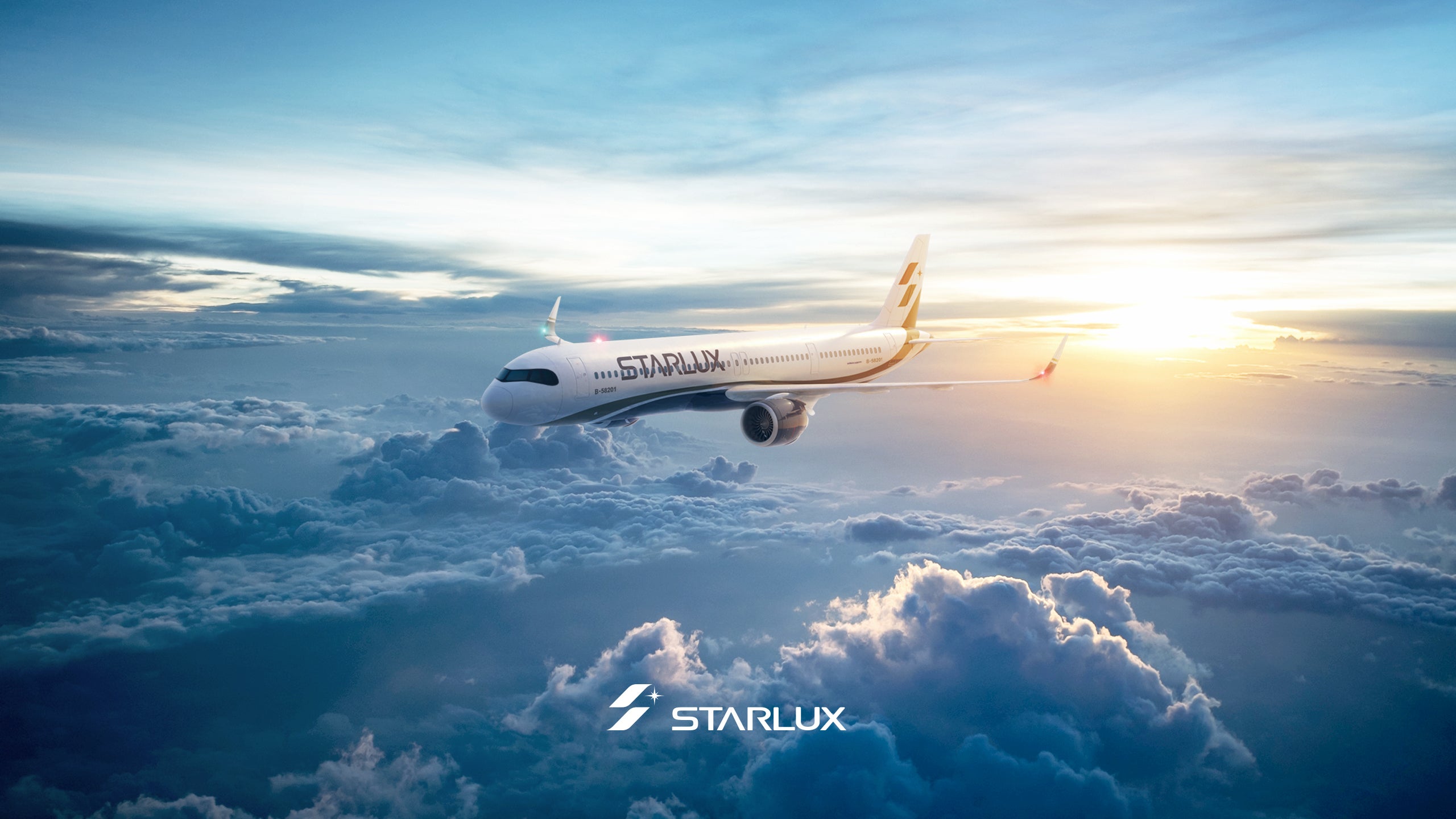 We've seen a number of new airlines launch in the last few years (and an equally large number collapse), but nearly all of these carriers have been of the low-cost or budget variety. It's been a while since we've seen a new full-service airline promising high-end service. But in just a few days that's what we'll see when Taiwan-based Starlux Airlines begins selling tickets.

The airline turned heads back in 2018 when, as a relatively unknown startup, it placed an order for 17 long-haul Airbus A350s, a clear signal of its future ambitions. Today we're going to take a look at everything you need to know about Starlux Airlines, including its first routes and how it fits into an already competitive market.

Who is Starlux Airlines?

Starlux Airlines bills itself as an upstart luxury airline, based in Taipei, Taiwan (TPE). The founder, Chang Kuo-wei, comes from an aviation dynasty. His father, Chang Jung-fa, founded Evergreen Group, the parent company of EVA Air, and Chang Kuo-wei served as chairman of EVA Air for three years before being ousted in 2016 in a power struggle triggered by his father's death. The Chang family built EVA Air into one of the most respected and highly rated airlines in the world, and Chang Kuo-wei will be applying that experience to help Starlux grow.

In its marketing, Starlux has all the trappings of a luxury carrier, starting from its slogan, "Born to be luxury, Shining like stars." The Starlux logo features two wings forming an S for Starlux, along with the north star, a tribute to Chang Kuo-wei's father. The color palette of iron, earth and rose-gold tones appears throughout the airline's branding as well as in the cabin. Starlux has even partnered with perfume manufacturer P. SEVEN to develop a signature fragrance, dubbed "Home in the air," with notes of various woods and leather combined with iris and violets. This scent will be found on board Starlux flights, as well as at the ticket counter and lounges. It's even going to be on the hot towels used to welcome business-class passengers on board.

Some startup airlines might opt to lease or pick up cheap secondhand planes to launch with, but Starlux is going all-in with next-generation aircraft. The airline currently has an order for 10 A321neos, three of which will be used to launch the inaugural routes on Jan. 23.

These planes feature eight business-class seats spread over two rows. Starlux has selected the popular Collins Aerospace Diamond seats for business class, with finishes designed by BMW's Designworks. These fully flat seats are similar to what you'll find in business class on American Airline's transcontinental A321Ts, and are one of the better products available on a narrow-body plane. Each seat will be just over 20 inches wide with 63 inches of pitch, and transform into an 82-inch bed when flat.

The economy cabin may test Skylux's claim of being a true luxury carrier. Featuring 180 seats, spread across 30 rows in a 3-3 configuration, the cabin will give travelers just 31 inches of pitch. Still, each seat is equipped with a leather headrest and USB charging port.

Starlux also has that order for 17 Airbus A350s that it placed in 2018, split between nine A350-900s and eight larger A350-1000s. The first plane is expected to be delivered in 2021 and by the time the order is complete in 2024, Starlux will be the largest A350 operator in Taiwan, ahead of China Airlines and its 14 A350-900s. Starlux plans to use these plans to launch long-haul routes, including service to the U.S., though it has not yet provided details on routes or schedules.

The initial route network is certainly limited — three daily flights to Macau, two to Da Nang and one to Penang — but there's plenty of interest in this new airline. Only 11 minutes after ticket sales went live, Starlux had completely sold out all six of its inaugural-day flights.

I'll be flying the airline's business-class product on the 4-hour, 50-minute flight between Taipei and Penang in early February, so make sure to stay tuned for a review! One-way business-class tickets on this route start at about 16,650 TWD (~$550 USD). That's roughly in line with what China Airlines charges on the same route. The difference is that Starlux business-class passengers get a fully flat bed, while China Airlines flies a 737 with standard reclining seats in business class. Meanwhile, one-way economy tickets start at just over 7,000 TWD (~$235 USD), again in line with China Airlines.

Starting an airline from scratch is a tough task. But at the end of the day, deep-pocketed investors can put up money for planes and install nice seats on them. The real test Starlux will have in order to earn the badge of a truly high-end carrier comes down to the so-called "soft" product, including food and service. Passengers booked in business class have the option to pre-order meals from a set menu, with a choice between a contemporary Asian dish, short rib steak or chicken Normandy. I selected the Asian dish and am really looking forward to that Mekong Mule drink pairing.

Starlux looks promising so far, with reasonable fares, sleek, modern aircraft and comfortable cabins. But there are a number of challenges it will face from day one. Taiwan is already home to two major airlines — EVA Air and China Airlines — with established route networks, name recognition, corporate contracts and all the other factors an airline needs for continued success.

Starlux, by comparison, will be starting off with just three regional routes, and unusual ones at that. The airline has chosen to eschew major Asian population centers like Tokyo and Shanghai and instead fly to secondary destinations. Starlux is currently using one plane per route and even if it improves its fleet utilization slightly as it grows, an order of 10 A321neos will only allow it to serve 15 or so destinations, based on the way the carrier is currently scheduling. That means Starlux will have to make tough choices — Bangkok? Singapore? Seoul? — on which Asian markets it serves and which ones it doesn't, unless it orders more planes.

Even once Starlux takes delivery of its A350s, it will be no easy task to carve out market share from entrenched players EVA and China Airlines. Although we don't know which U.S. cities Starlux will fly to first, it wouldn't be a great surprise if the airline goes into larger markets like Los Angeles or New York. Already, you can already find a whopping five 777-300ER aircraft flying from Taipei to Los Angeles (LAX) on some days. That's well over 1,000 seats. EVA and China Airlines offer all the benefits of an alliance membership, including mileage earning, elite status recognition and — perhaps most importantly — expanded route networks for connecting traffic; EVA is part of Star Alliance, and China Airlines of SkyTeam.

A large percentage of passengers flying between L.A. and Taipei are connecting, either in the U.S. (courtesy of alliance partners United or Delta) or in Asia. Starlux, however, will not have similar alliance ties to leverage as it starts up. It will either have to choose well on point-to-point routes or make its mark competing on price while also delivering on the luxury character it has been touting.

I've been following Starlux for over a year now, and I'm excited to see the airline finally take to the skies later this month. EVA Air has proved time and time again to be one of my favorite business-class products in the skies. If Starlux can come anywhere close to that, it will be an absolute treat to fly. There's no denying that Starlux is entering a tough market, but if anyone can pull of this ambitious plan, perhaps it's the man at the helm: Chang Kuo-wei.