Articles
Tarah Chieffi is a family travel writer for TPG. Whether she’s sharing tips for planning the perfect theme park trip or finding a kid-friendly hotel, her goal with every story she writes is to inspire families to get out and explore the world.
Follow
Oct. 02, 2022
•
6 min read 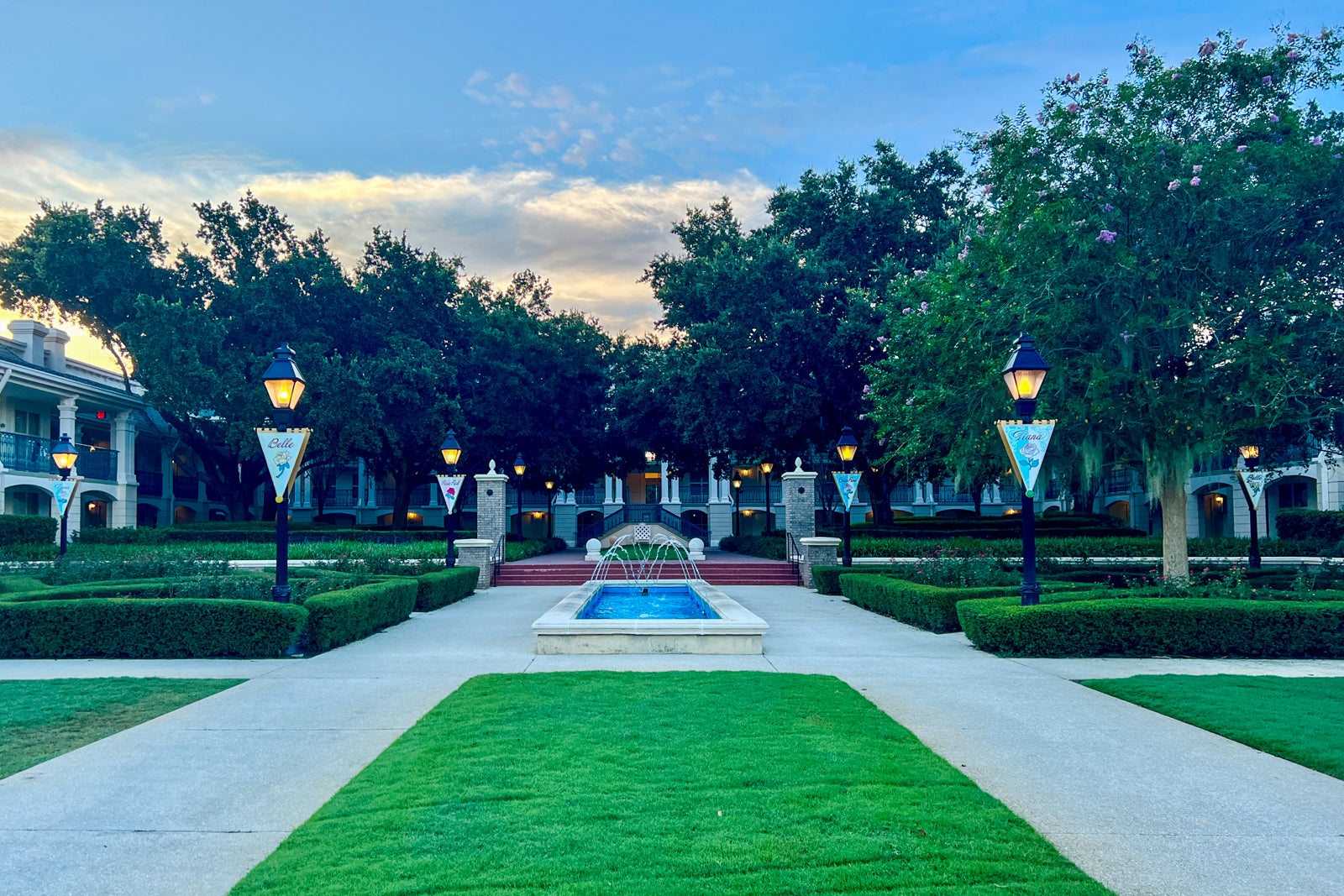 "Hello, princess!" It's a friendly greeting you often hear from Disney cast members and, despite my age and lack of royal family members, it really does make me feel a bit more regal. On a recent visit to Disney World, I decided it was time to take my rightful place on the throne by staying in a room fit for a princess such as myself at Disney's Port Orleans Resort — Riverside.

The overall design of the resort was inspired by the Louisiana Bayou, with a lobby themed to a steamship ticket station, a saw-mill-themed waterslide at the pool and a well-stocked fishing pond. Most guests stay in rooms that have a Southern feel and subtle nods to "The Princess and the Frog," which was set in New Orleans — but I am not most guests. Luckily, I found suitable accommodations in one of the resort's "Royal Guest Rooms."

If you, too, want the royal treatment on your next Disney World vacation, here's a look at what you can expect from the Royal Guest Rooms at Disney's Port Orleans Resort — Riverside.

The entrance is grand

The stately white-columned mansions that house the Royal Guest Rooms are situated on the banks of the Sassagoula River. To reach them, you must cross a bridge from the main section of the resort where the pool, dining and check-in areas are. Once you reach the other side, the walkway leads you to a series of buildings with well-manicured lawns, flowing fountains and grand staircases (elevators are also available).

My room was in the Parterre Place building, which had the added royal touch of banners bearing the names of Disney princesses on light poles throughout the courtyard.

Note that the buildings are quite far from the main area of the hotel. The luggage attendant did offer me a golf cart ride (alas, not a horse and carriage) to my room so that I wouldn't have to lug my suitcase all that way. I declined, but I appreciate that they offer that service.

Your favorite Disney stories are represented

As soon as I stepped into the room, I noticed decorative elements themed to Disney's princess films. Portraits of Ariel, Belle, Jasmine and their friends adorned the wall next to the bed, banners with silhouettes of their suitors hung in the entryway and Aladdin's magic carpet was woven into the carpet pattern.

At every turn, I noticed more details that played into the princess theme. The oak furniture was accented with gold filigree, the shower curtain was designed with gold starfish, sand dollars and "dinglehoppers" from "The Little Mermaid, and the sink faucet was shaped like the genie's golden lamp from "Aladdin."

All of the practical aspects of the room were the same as any standard room at a moderate Disney resort. The room had a minifridge, coffee maker, iron and ironing board, hair dryer and vanity area outside of the bathroom.

Tiana is the star of the show

While quite a few princesses are represented, Princess Tiana featured most prominently. There was a large, ornately-framed portrait of Tiana hanging above a red-and-gold upholstered bench and a letter from Tiana herself welcoming me to the room and inviting me to make myself at home and enjoy making magical memories during my stay.

The standout feature of these royal guest rooms is the beds. The headboards stretch all the way to the ceiling and are painted with a nighttime bayou scene in shades of deep blue and purple. When you press a small button on the side of the bed, the headboards magically come to life as fireworks burst into the sky above the swamp and fireflies light up the night. Let's just say, I pressed that button more times than you might think an adult would.

A few amenities are outdated

Most rooms at Port Orleans — Riverside had been renovated by the time the resort reopened after Disney World's temporary pandemic closure, but most of the Royal Guest Rooms were left untouched. For the most part, I considered this a good thing because I was impressed by the intricate theming, but it did mean that a few amenities were outdated.

There were no USB ports anywhere in the room and the television was smaller and older than I've seen in other hotel rooms at Disney World. Most now have newer remote controls with channel guides and other features, but this one forced you to scroll through every channel and didn't do much else.

The location is serene

While this was my first time in a royal guest room, it wasn't my first time at Disney's Port Orleans Resort. I've previously stayed at French Quarter, Riverside's sister property, and it quickly became one of my favorite Disney resorts.

I love the quiet, waterfront setting and the walking paths along which you can explore the resort. The area surrounding the resort is wooded and the architecture feels so authentically Louisiana (especially the New Orleans-themed rooms at Port Orleans — French Quarter). Thanks to its location along the Sassagoula River, I was also able to take a leisurely ferry ride from the hotel over to Disney Springs.

The price is relatively reasonable

When discussing prices at Disney World, everything is relative. I wouldn't necessarily call the Royal Guest Rooms a "budget-friendly option," but the price is only slightly more per night than a standard room at Port Orleans — Riverside. Using a sample date of Feb. 15, 2023, a standard river view room costs $364.00 per night plus tax. A Royal Guest Room with a river view is only $17 more, at $381 per night plus tax.

To some, the princess decor in Disney's Port Orleans Resort — Riverside Royal Guest Rooms may feel over the top, but if your family is princess-obsessed, the theming is spot on — and the price difference between a standard room and a room fit for royalty is minimal.