12 of the most beautiful airport terminals in the world 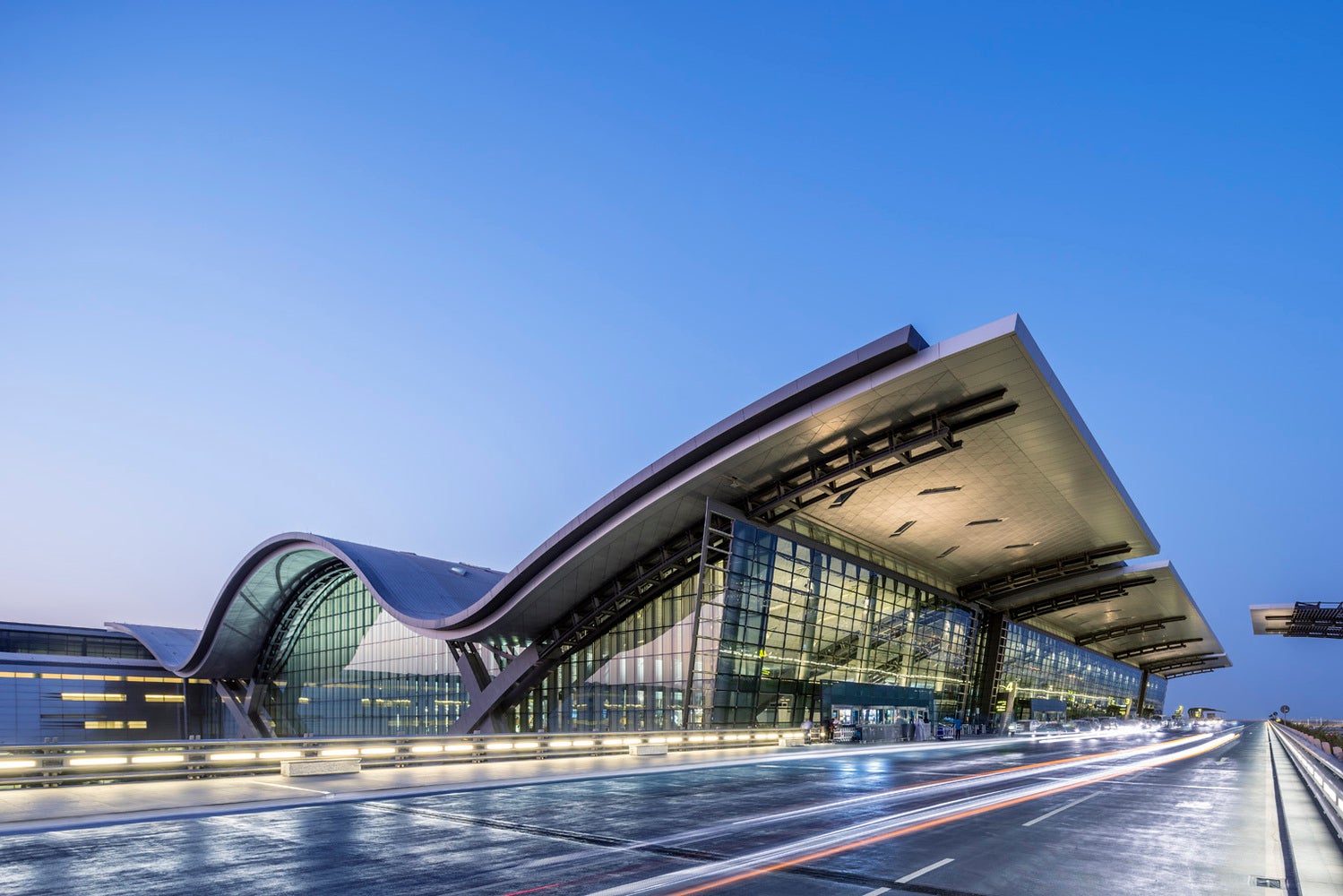 Commercial air travel can involve dreadful moments, from waiting in long security lines to dealing with maddening flight delays or cancellations. Most flyers view the airport as a means of transportation — not an architectural wonder.

But airports are keen on shedding that sentiment and want to serve as a respite from the unpleasantries of travel — and it shows with ambitious grand projects like the Zaha Hadid-designed terminal at Daxing International Airport in Beijing (PKX) and the headline-worthy opening of the new Istanbul Airport (IST). Fortunately, millions of travelers daily have the opportunity to relish in the beauty of these 12 lovely airport terminals that carefully balance beauty, design and function, making that next flight delay a bit more pleasant.

Declared the world’s best airport by Skytrax for the seventh year in a row and commonly referred to as a destination in itself, it’s no surprise that a record-breaking 65 million people passed through Singapore Changi Airport in 2018. With the recent addition of its stunning Jewel Complex earlier this year, passengers get to marvel at the 130-foot-tall Rain Vortex — the world’s largest indoor waterfall. At night, the Rain Vortex comes alive with an eye-catching light show that lasts around five minutes. With one-of-a-kind attractions, a 1,400-tree forest, its very own hotel and more than 280 places to shop and dine, Jewel is a welcome sensory ignition for passengers flying through Singapore.

In 2018, Marrakech’s Menara Airport served over 5 million passengers, a sign of the city’s increasing popularity and accessibility to Africa. So it’s no surprise that Casablanca-based E2A Architecture led a 2008 expansion project of the airport. The visually striking and solar-powered Terminal 1 at Marrakech's airport merges Moroccan style (elaborate geometric patterns; high, glass-domed ceilings; and mosaic tiles) with a 21st-century construction technology. Clad in white aluminum panels and featuring stylized Islamic ornamental designs, the structure sheds tons of light inside the terminal, with brightness varying according to the time of day.

This brand-spanking-new airport, hailed as the largest airport in the world, is anticipating even more growth in the next 10 years to fulfill the lofty goal of handling a jaw-dropping 200 million passengers annually. Istanbul's new aviation darling was designed by a London-based firm with evident architectural inspiration taken from Istanbul's Ottoman legacy — rich with color, patterns and light. The massive, single-terminal airport has high, vaulted ceilings with skylights throughout, producing natural daylight, a welcome feature for those at check-in, security or passport control or for shoppers at one of more than 200 stores and restaurants. The terminal's transit hall follows the shape of the Bosporus, and thought was even put into the air-traffic-control tower, designed in the shape of a tulip, Turkey’s national symbol.

The newest airport on our list is Beijing's Daxing, which welcomed its first commercial flight landing on Sept. 26. The $11.5 billion airport replaces Nanyuan Airport, which was Beijing’s first-ever airport. Often likened to a starfish for its five concourses connecting to a main hall, this design invokes traditional principles of Chinese architecture that organize interconnected spaces around a central grand courtyard. Designed by the world-famous Zaha Hadid Architects, the world's largest single-terminal airport has linear skylights that stretch the length of each of the five aircraft piers. Its symmetrical configuration ensures that the farthest boarding gate can be accessed by foot within eight minutes.

As India's second-busiest airport, Mumbai International Airport's swanky Terminal 2 was inspired by India's national bird, the peacock. It's most apparent when you gaze up and see the peacock-tail-patterned roof, showcasing what seems like 1,000 white peacocks in the sky. T2 is home to India’s largest public art program, in the form of an almost 2-mile-long art wall, illuminated by skylights, with more 7,000 pieces of artwork and artifacts from Mumbai and other parts of India.

Large windows in the roof allow natural light to penetrate Terminal 4 of Madrid-Barajas Airport. This distinctive terminal was designed by Richard Rogers and Antonio Lamela with a wavy canopy roof structure made of bamboo and supported by bright yellow columns made of steel. The winner of six major architectural awards, including the Stirling Prize of the Royal Institute of British Architects, RIBA European Award of 2008 and the RIBA Airport Award of 2005, T4 at Madrid Barajas Airport is a monumental aviation masterpiece.

Denver International serves more than 64.5 million passengers each year and has seen record-breaking growth for the fifth year in a row. Built in 1995 and designed by Curtis Fentress, its fiberglass roof is shaped to resemble the Rocky Mountains and allows the interior space to be flooded with natural light. A variety of sculptures, murals and installations support a permanent art collection spread throughout every terminal. Along the walkway between the Jeppesen Terminal and Concourse A, an auditory art piece of tribal chanting thrums as passengers make their way to catch a flight.

Still one of the newer airports on the list, Hamad International welcomed a record-high 10.7 million passengers to Qatar in the third quarter of 2019. The airport’s massive departure hall is crowned with an undulating roof that was designed by HOK Architects, and arriving travelers are welcomed by a 23-foot bronze Lamp Bear sculpture created by Swiss artist Urs Fischer. Recently announced, the airport will undergo a rapid expansion by 2022, adding a 107,000-square-foot indoor tropical garden with a water feature and more than 126,000 square feet of additional retail space.

Terminal B/C at Washington, D.C.'s Reagan National Airport — originally the work of renowned architect Cesar Pelli — opened in 1997. While Terminal A at DCA is undergoing a massive $1 billion renovation to be completed by next year, Terminal B/C beams with charm as its 54 stainless-steel-clad domes and incorporated glass oculus give it a quality of 20th-century modernism combined with neo-Gothic architecture. Apart from aesthetics, DCA is efficient and easy to navigate for its nearly 2 million monthly passengers, though there is a major construction project underway right now that will dramatically change the way travelers enter the airport. Barring delays, the project is expected to be completed in 2021.

This year-round international airport in Uruguay, Montevideo's serves as the front door for passengers visiting the country. The new terminal, designed by renowned local architect Rafael Viñoly, is a magnificent throwback to New York-JFK circa the 1960s. Open-aired and comprising one large curved-dome roof and grand terraces overlooking the runways and arrival areas, it's not a busy airport compared to its counterparts at other South American capital cities. Still, the new terminal is designed to handle 4.5 million passengers a year. What does that mean for you? Fewer people to crowd the elegant and airy design here as you glide easily through the terminal.

One of two airports serving the greater Tokyo area, Haneda is a major hub that receives 87 million passengers every year. Designed by famed Argentine architect César Pelli, the tall ceilings, ample light and emphasis on circular patterns is sure to make your jaw drop as soon as you arrive. As the 2020 Olympic Games near and the country prepares for an influx of international travelers, a new transit line connecting Haneda Airport directly to Tokyo Station in approximately 18 minutes will make this not only the more aesthetically appealing airport in Tokyo but the more convenient, as well.

Hailed as Seattle's second airport and the smallest on our list, Paine Field — roughly 40 miles from Seattle-Tacoma International (SEA) — was designed by Fentress Architects, the same firm that designed Denver International. The two-gate, 30,000-square-foot, state-of-the-art terminal exudes luxury, with polished black granite floors, check-in stands made of Italian marble, a limestone-covered wall and two fireplaces. The jet bridges are constructed from glass imported from Germany, making the boarding process less confining and more aesthetically pleasing to the eye. Passengers need to fly United Airlines or Alaska Airlines to experience this boutique-like marvel of an airport, as only those two carriers offer commercial service here at the moment.

What is your favorite airport? Let us know in the comments below.