Articles
Ethan Steinberg has been a frequent flier for as long as he can remember. He went from studying abroad in Paris to moving to Shanghai after graduating college, where he covered all things travel in the Asia-Pacific region for TPG.
Oct. 12, 2019
•
14 min read 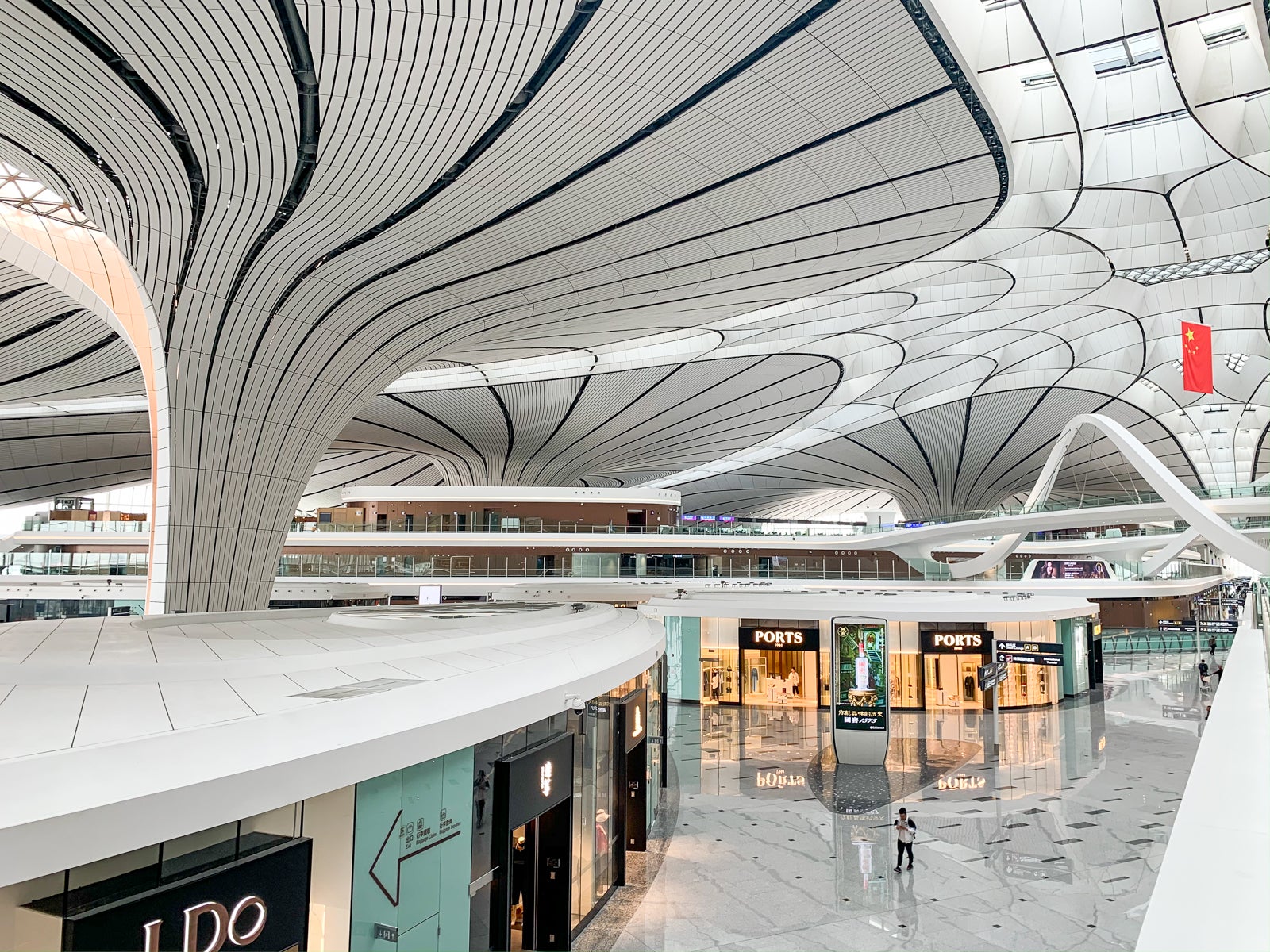 Inside Beijing's new Daxing airport, the world's largest single terminal
This post contains references to products from one or more of our advertisers. We may receive compensation when you click on links to those products. Terms apply to the offers listed on this page. For an explanation of our Advertising Policy, visit this page.

On September 25th, 2019, just a few days before the 70th anniversary of the founding of the People's Republic of China, Beijing Daxing International Airport (PKX) opened its doors to passengers. After nearly five years of construction at a cost equivalent to $25 billion, the sprawling airport is ready to take some of the strain off of Beijing Capital Airport (PEK), which has been operating close to capacity for a while now.

Daxing was designed by world-renowned architect Zaha Hadid, with an already iconic starfish motif that can be seen throughout the airport. The total airport complex spans roughly 100 football fields, and at 700,000 square meters — 7.5 million square feet — Daxing's five-concourse terminal is now the world's largest airport terminal. This week, I made my first visit to the new airport. Here's what it was like wandering around the giant starfish.

For an airport that's projected to serve over 70 million passengers annually within the next five years, I was a surprised at just how hard it was to book a flight from Shanghai to Daxing. With a few exceptions, nearly all domestic flights to and from Daxing are currently operated by China United Airlines, a low-cost carrier with a number of very colorful liveries.

The first flight to depart from Daxing was a China Southern A380, but during the six hours I spent at the airport I didn't see more than four other planes on the ground, all of which belonged to China United Airlines. It was a little eerie to see multiple concourses completely devoid of any activity or sign of life.

My first impression of the terminal was overwhelmingly positive, as the soft white and gray tones and dark wood combined with the plentiful natural light to create a relaxed and luxurious ambiance, much like the design you'd find at an Edition hotel: understated luxury.

Our flight had landed in the D concourse, so as I followed signs towards baggage claim I naturally found myself walking towards the stunning atrium at the center of the airport.

While the sloping orange roof might bear a resemblance to Beijing Capital on the exterior, inside, Daxing is the pinnacle of modern design. The late Zaha Hadid was known as the "queen of the curves," and the way she played with sloping roofs and overlapping floors gives Daxing its unmistakable identity.

While there weren't many passengers in the terminal when I arrived, almost everyone seemed interested in stopping to photograph the new airport. One thing I was pleased to note is that everything, from the international transfer desk to baggage claim and bathrooms was clearly and easily signed in English. Many of the signs even included estimated walking distances, helping you better budget your time.

I was traveling light for this overnight trip which meant no checked bag, but I still had to walk through baggage claim on my way out of the airport. The lower ceilings here made this feel like the most "normal" part of the airport, which is to say the least exceptional design-wise. I do hope that even once millions of passengers a year start flying through Daxing that the airport staff will still take the time to arrange luggage carts around each carousel, a small touch that can make the end of your journey much less stressful.

After exiting the secured area I assumed I was done for the day and got ready to find a cab to my hotel, but the captivating atrium by the entrance to the terminal stopped me dead in my tracks. I'm lucky to have frequented a few of the world's prettiest and best-rated airports (including in Hong Kong and Singapore), and from a pure aesthetic standpoint this takes the cake.

When I returned to the airport the next morning for my flight back to Shanghai, my Didi driver dropped me off on level three which was signed for domestic departures.

There was a bit of confusion, as all the check-in counters (both domestic and international) are up on level four, while domestic passengers have to go down a level to clear security on level three. Again, it's clearly going to take a while for Daxing to get fully up to speed. While multiple airlines including British Airways, Finnair, LOT Polish and more have announced plans to move some or all of their operations from PEK to Daxing, on this morning barely 1/4 of the check-in counters were in use.

Chinese people are already used to using facial recognition to pay for groceries or log into apps on their phones, and Daxing comes equipped with biometric scanners at check-in, security, and of course at the gates themselves.

Behind the check-in counters was an elevated area with a few restaurants and an "observation deck." There were ropes keeping passengers back from the glass walls, so I'm not sure which specific part of the deck was intended for observation but every corner offered different yet fabulous views.

Eventually I made my way down to security on the third floor, where I decided to follow the multiple posted signs and put my camera away. While they weren't in use yet, there were multiple biometric kiosks set up that should speed up the security process for domestic flights, at least for Chinese citizens.

I was pleased to see that the security lanes themselves were incredibly modern, with automatic moving bins and multiple numbered stations on the conveyor built to avoid the awkward logjam that usually ensues. However, some of the tech was clearly not working as intended. When I pushed my bin onto the conveyer built a red light started flashing. It kept beeping even when I took it off and tried again, so eventually the agent had me move all my belongings into a different bin, bring it back to the same position, and try again. When my backpack came out the other side, the bin got stuck and an agent had to manually push it to the end of the belt so I could retrieve my belongings. There are bound to be growing pains especially as new staff adapt to new technologies, and I have no doubt that issues like this will get sorted out once the full airport operations get up to speed.

Immediately past security was a China Eastern VIP lounge. Given how new Daxing is, there aren't yet any Priority Pass lounges at the airport. Many Chinese airlines make their premium lounges available to Priority Pass members (including the China Eastern lounge at Shanghai Pudong) so I'm optimistic that we'll eventually see a number of good options in both the domestic and international wings.

Unfortunately even this brand-new airport has the dreaded bus gates, perhaps to accomodate low-cost carriers who don't want to pay to park at a gate. The good news is that unlike many airports that hide the bus gates in a dark basement somewhere, these are located directly across from the central atrium with plenty of natural light and nearby shopping and dining.

Speaking of shopping and dining, that was perhaps my biggest complaint about the airport. While there are plenty of luxury stores already opening up (I wish I had the wide-angle camera on the new iPhone so I could've captured the Gucci store right across from the KFC), there weren't enough casual grab-and-go Hudson News type stores in the terminal. I was trying to buy a bottle of water before my flight, and there wasn't a single store in the entire C concourse that was selling one. I had to walk all the way back to the main atrium and then all the way to the end of the D concourse before I found anywhere to buy a bottle of water. That walk, plus getting back to my gate, was easily a full mile. I expect more shops and restaurants to open as the airport fills up, but that's just something to keep in mind.

At the end of my concourse I found a beautiful open air courtyard (I believe they have them at the end of all the concourses). There was a sign stating that this was still closed for construction, but depending on how smoggy the air is this might be a nice place to relax and unwind before your flight.

Another thing that I found interesting was how close many of the gates were to the walkways. Many Chinese airlines fly wide-bodies on domestic flights, including 777s and even 747s. If the congestion below was caused by simply boarding a 737, I can imagine some serious traffic jams when the wide-bodies start showing up in earnest.

At my gate I was reminded that while Daxing is open for business, there are undoubtedly some odds and ends that still need to be finished.

And just like that my short stay was over, and it was time to head back to Shanghai.

Beijing Daxing is a jaw-droppingly gorgeous airport, and a mile above most other Chinese airports. But will it ever be able to compete with some of the world's best, like Singapore Changi? As beautiful as Daxing is, it doesn't have anything (yet) in the way of amenities to rival The Jewel in Singapore, or the butterfly gardens or movie theaters you'll find at that airport.

For now, flying to Daxing might not be worth the trouble. The airport is at least 30 minutes south of Beijing, whether you're driving or taking public transit, and with limited flight options you won't have an easy time connecting through Daxing in route to some other international destination. That will change with time though, meaning the real test for this airport is how quickly and seamlessly it can scale operations.