12 Mistakes Most Tourists Make in Greece 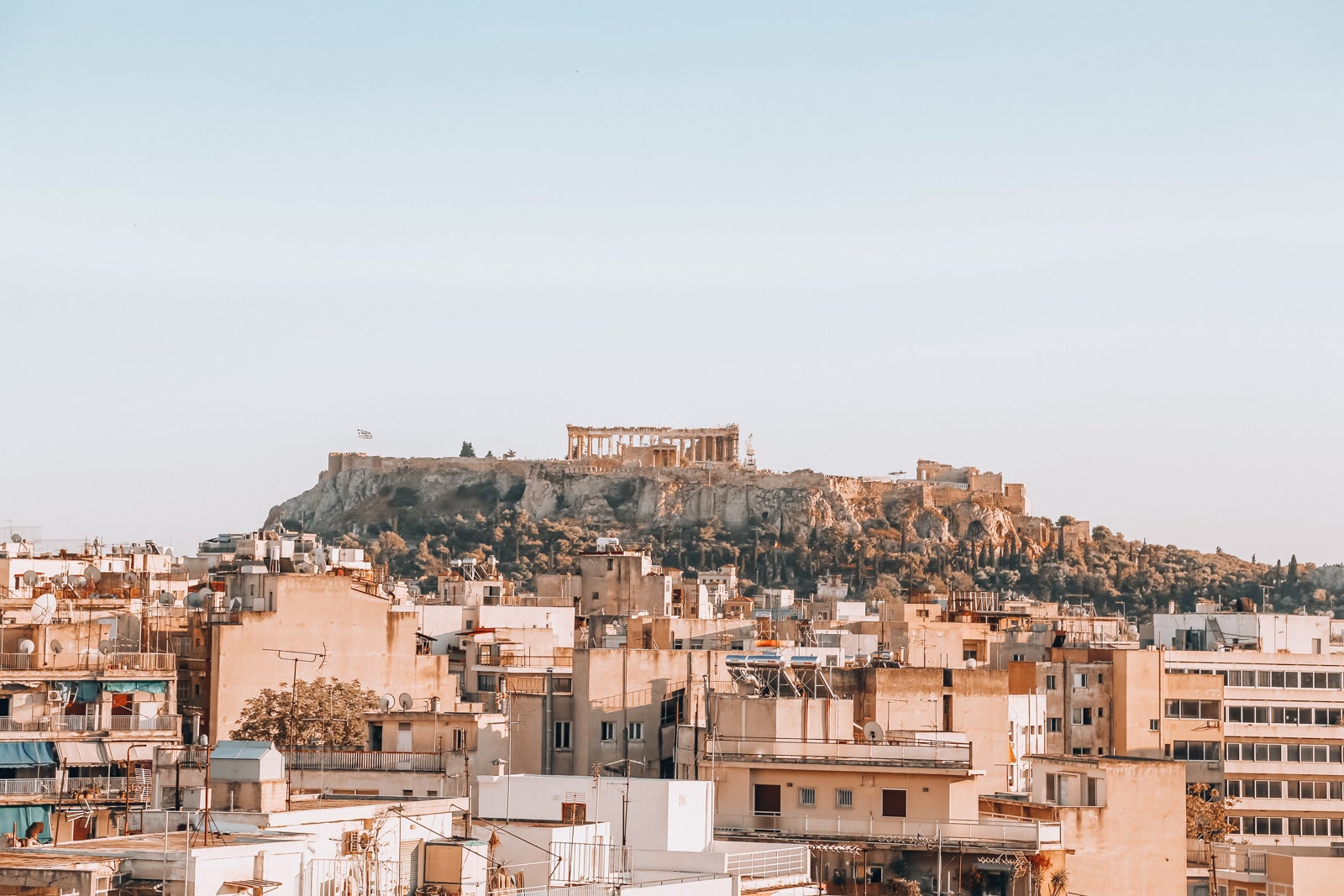 Greece was the first foreign country I visited when I was just three (my parents wanted to do a road trip through Rhodes; I remember the roof flying off the car on the second day). Many years later, I made at least a dozen weekend jaunts to Athens from Tel Aviv where I was living at the time. Eventually, I moved to Athens full time.

During my frequent travels, I made a number of mistakes — and watched other travelers make mistakes of their own. Even though I'm now a resident, I'm sure I continue to make gaffes. (I can tell you from personal experience, asking for a non-smoking table is a losing battle.)

From the Acropolis in Athens to the winding whitewashed lanes of Mykonos, the Mediterranean country of Greece is certainly no slouch when it comes to tourist iconography. But to experience Greece the way the Greeks do — and to get a better read on some of those clichéd but essential sights — it helps to avoid the common pitfalls that could compromise an otherwise unforgettable trip.

Athens is one of the oldest cities in the world and the Parthenon is just the start. A full day is scarcely enough time to explore the Acropolis properly, let alone the Acropolis Museum and ancient sites nearby such as Areopagus, Agora, Temple of Hephaestus and others.

In summertime especially, it's easy to give in to the temptation to just pass through Athens on your way to the Greek islands, but think of it this way: Fire Island might be a great escape from Manhattan, but even in the height of summer there are things you'll find nowhere else but in the city. Athens is much the same. Ideally, you should take a city tour on your first day just to get oriented, then branch out to explore neighborhoods like Kolonaki, Koukaki and Petralona.

Plaka is the pretty neighborhood at the foot of the Acropolis and, unsurprisingly, it's also the most touristy in Athens. Its pastel-colored neoclassical mansions and scattered ancient ruins make it great for a stroll, but with few exceptions it's not where the locals go to eat or hang out. And there is surely no reason to overpay for a Greek salad.

To sample quintessential Greek homestyle cooking at amazing prices, eat at any branch of Ladokolla (an unchainlike Greek restaurant chain that specializes in grilled meat and other "native" dishes including saganaki and ameletita) where many dishes are served on signature paper plates.

For souvlaki perfection — and I've tried dozens if not hundreds to compare — an industrial-chic spot called Hoocut is the ticket.

3. Relying Completely on the Athens Metro

The Athens Metro is definitely modern, but distances between stops can be vast and some of the most central neighborhoods have no metro service at all. So it's a good way to get from the airport to the city center, or to catch an early morning ferry from Piraeus, but not the best way to explore Athens in the manner of, say, the much more extensive Paris Métro.

Thankfully, Athens is a city of the south, meaning the weather is generally conducive to sightseeing on foot. Uber didn't work out too well in Greece, but there's a great way to order a taxi from your smartphone called Beat.

Greece has hundred of islands (thousands, if you count the uninhabited ones) so choosing which ones to visit can be either fun or exasperating, depending on how much time you have. But trying to cram in as many islands as you can into a single trip? Big mistake.

It can be tempting to take one of those cruises from Piraeus (the port of Athens) that promise you three islands in a day — usually that means islands of the Saronic Gulf like Aegina, Poros and Hydra. With the advent of high-speed ferries, in summer you can even go to Mykonos for the day and be back in Athens for dinner.

None of the above, however, is recommended. You will spend too much of the day in transit and you'll almost certainly overpay. The savvier plan is to do a bit of homework and see what islands appeal to you more, then make plans to visit them accordingly.

For example, Poros and Hydra are both within easy reach of Piraeus and each merit a day trip (or longer) on their own. But with a little creative scheduling, you could even visit both in the same day, and seeing two islands in a day makes things a bit less of a blur than trying to take in three. Check out the sites for Hellenic Seaways and Ferryhopper.

At first glance the port of Piraeus appears to be rather lacking in charm. And it is. As Greece's busiest passenger ferry port, its main business is shipping as well as shuttling people to and from the Greek islands. However, Piraeus has a long history going back as far as Athens, and without her superior naval fleet which was in antiquity berthed in Piraeus, the Athens we know might have been little more than a footnote in the history books. The Archaeological Museum of Piraeus is a must, as is exploring the city's "mini" leisure ports such as Zea Marina, where you can gawk at megayachts.

6. Staying Exclusively at Airbnbs in Athens

Prior to moving to Athens, I stayed at dozens of hotels and Airbnbs in the city. If you're traveling here for the first time, I absolutely recommend you stay at a hotel instead.

Staying in an apartment on your virginal visit to Greece may mean totally missing out on philoxenia — the proud tradition, since the time of Homer, of Greek hospitality. It also means missing out on breakfast. Although "bed and breakfast" is implicit in Airbnb's acronym, very few Airbnbs actually offer breakfast. By contrast, most Greek hotels include breakfast in their room rates and the service can range from light and continental to pretty epic. There are also plenty of points hotels in Athens, too, so you can definitely get a better value during your travels that way.

Also, I know that many Airbnb hosts are helpful and happy to point out neighborhood highlights and such, but concierges and other hotel staff members tend to have a deeper general knowledge of both specific restaurants as well as hot spots and the general workings of the city. And they're available 24/7.

The second largest city in Greece is completely different from Athens and is a cultural heavyweight in its own right. Named after Alexander the Great’s half-sister, the city also happens to be the birthplace of Mustafa Kemal Atatürk, founder of the modern Republic of Turkey. But this spirited seaside city wears its historical complexities well. Essential stops include the Archaeological Museum, ancient Roman Rotunda and the Jewish Museum.

The fact that Santorini is now probably the selfie stick capital of the Mediterranean is a superficial complaint: The real problem is that, from toxic cruise ship fumes to just too many darn people scrambling around what is basically a volcanic rock, Santorini is the island poster child of overtourism. Plans are afoot to triple the size of its sardine can of an airport, but absent some major volcanic activity, Santorini won't be getting bigger any time soon.

Yes, the scenery is impressive and there are plenty of luxury hotels with pretty infinity pools. But the crowds can be unbearable. And if you're thinking of Santorini in summer? Sorry, but you'll find beachier beaches on the Jersey Shore. Happily, there are hundreds of alternatives. Check out islands like Ios, Tinos, Milos, Sifnos and Amorgos instead. Parakalo (you're welcome).

9. Looking for a Bargain in Mykonos

Are you one of Lindsay Lohan's friends? No? Well, in that case you're going to have to part with a truckload of points to score a halfway decent hotel room in Mykonos in high season (from June to September) or otherwise forget about it and hit up a nearby island instead, like Paros, Naxos or Syros.

10. Getting Coffee at Starbucks

Make like the locals and order έναν ελληνικό καφέ (enan elliniko cafe), or Greek coffee instead. And remember, it's a frappé you want for that instant — and cold — caffeine kick, whereas a characteristically grainy Greek coffee involves a bit more of a ritual. You know you're getting the real stuff if it costs you around $2 (or less).

A Starbucks in Mykonos might look appealing, but a quality cappuccino freddo in Greece should never cost more than around $2. (Photo via Shutterstock)

11. Insisting on a Nonsmoking Table

Yes, there are laws mandating nonsmoking sections in Greek restaurants, but bear in mind that getting a random restaurant full of Greek diners to foreswear tobacco is a bit like asking a room full of teenagers to put away their cellphones: Good luck with both. Mitigate the nuisance by asking to be seated outdoors, which happily is often an option.

On a recent visit to Crete I met two Americans who'd had enough of the crowds on Santorini (see above) and hopped a Seajet ferry to Heraklion, hoping to explore Crete in two days ahead of their flight home from Athens. I reminded them that Crete runs about 160 miles from east to west, and is approximately 3,220 square miles in total.

Santorini, by contrast, is barely 29 square miles and Mykonos isn't much bigger.

Crete is the largest island in Greece and not even 10 days is enough to thoroughly explore the place — neither the mountainous terrain nor the rather rudimentary network of roads work in the time saver's favor.

If you're looking for a short beach break, stick with Mykonos, Sifnos and other small islands. But Crete is so big it demands more time and maybe even a separate trip. Which, unless you hate gorgeous beaches and fantastic food, would definitely be worth your travel time.

Featured image by (Photo by Kylie Docherty via Unsplash)