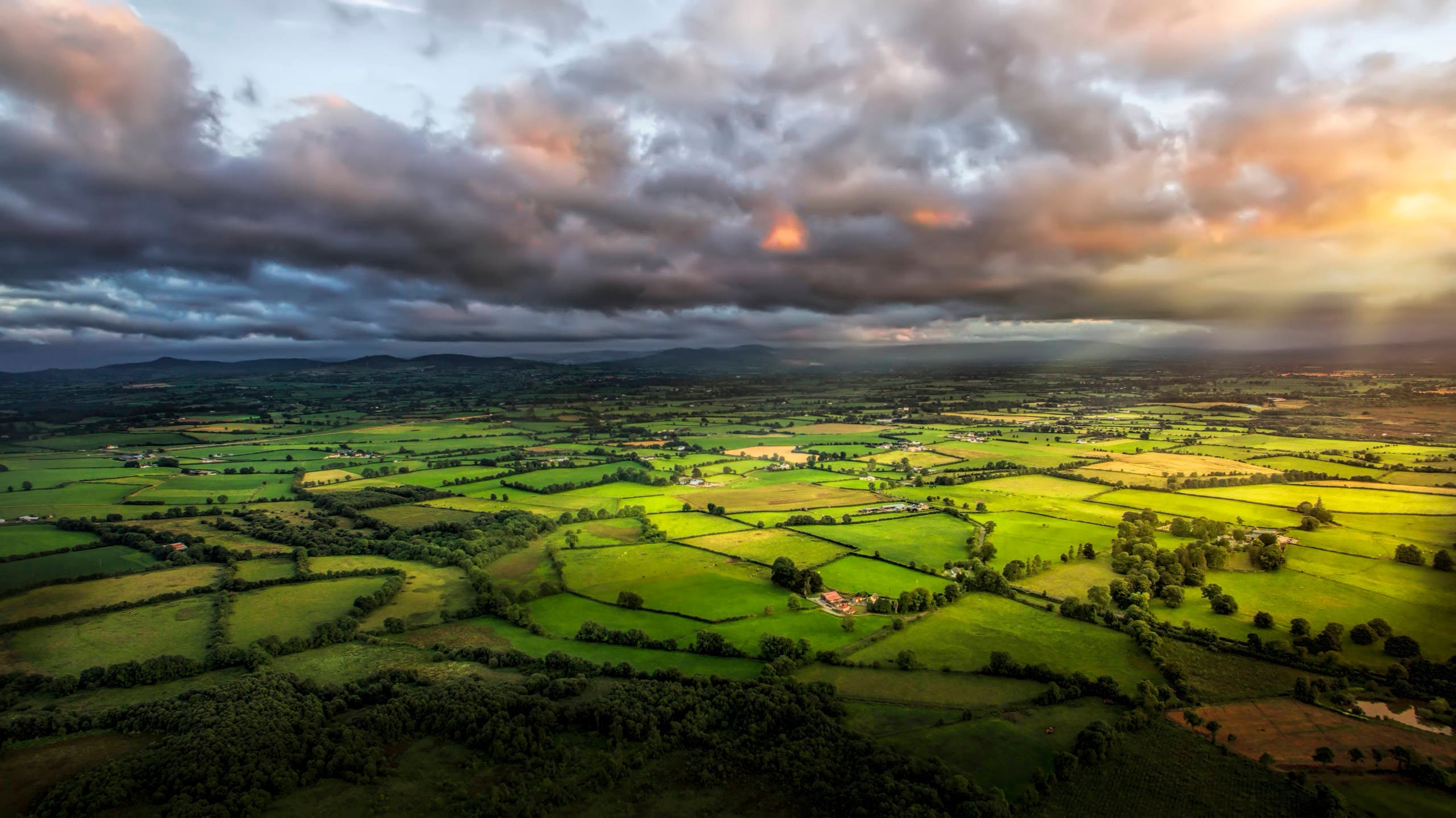 The Emerald Isle has something to suit all travelers -- from people on a budget to those after five-star luxury castle hotels.

Irish restaurants are also making a splash. Here's a list of some of our favorite Michelin-starred restaurants in Ireland, where to stay and some other things to do while you're there.

Aimsir restaurant in County Kildare focuses on ingredients grown or produced in Ireland. It completed the rare achievement of entering the Michelin guide with two stars on its debut less than five months after opening. English chef Jordan Bailey and his Danish wife Majken Bech-Bailey are the brains behind Aimsir where you can expect 18 courses of snacks, savory dishes from both land and sea, finishing with a sweet selection of desserts and petit fours.

Kildare is west of Ireland’s capital Dublin, so the nearest airport is Dublin (DUB), which is just 19 miles from Aimsir.

When you land, renting a car is a quick way to get to Aimsir. Avis is the official partner of British Airways Executive Club and you can earn 3 Avios per £1 spent, with a minimum of 500 Avios. If you rent for three days or more, the minimum goes up to 700 Avios. You can also earn Avios with Avis’ sister company, Budget.

Read more: Second Cities: Destinations to add onto a trip to Dublin

If you are feeling lazy after your 18-course feast, Aimsir is based within the Cliff at Lyons hotel. This country retreat, which also houses The Well in The Garden spa has just 38 bedrooms spread out across rooms, apartments and cottages. Midweek rooms start from $195 per night and include a full Irish breakfast. There aren’t many hotels in nearby Celbridge, but a 10-minute drive away is The K Club, part of The Fine Hotels & Resorts program, which includes a late 4 p.m. check out, early check-in and a food and beverage credit to be used during your stay. Midweek rooms start from $287.

The area is known for its horse breeding so check out the Irish National Stud farm where you’ll find a Horse Museum and Japanese Gardens. Kildare town is home to St Brigid’s Cathedral, with a 12th-century round tower that offers panoramic views of the area.

The Greenhouse on Dublin’s Dawson Street secured its second Michelin star. The food at The Greenhouse is inspired by the finest produce available, treated with the utmost respect and cooked with passion. A signature dish that has been on the menu for years is foie gras whipped into airy lightness topped with a Granny Smith apple gel, walnut and cubes of smoked eel.

Meanwhile, Variety Jones in Dublin picked up its first Michelin star, where you can find chef-owner Keelan Higgs in the open kitchen preparing original, refined yet unfussy dishes that burst with flavor, many of which are cooked over an open fire. The menu is a selection of plates over five, six or seven courses including snacks, warm dishes, cold dishes, pasta and family-style fare.

Dublin (DUB) is the nearest airport. From Dublin Airport there is the Airlink Express bus (you can buy tickets at the arrivals terminal) or a taxi from the airport, which costs around $47.

With both restaurants being in Dublin city center, there is a wide variety of hotels where you can spend points. A well-located property for the restaurants is The Liberties Dublin, a Hyatt that is in a very historic part of Dublin with a local whiskey heritage (there are more than 40 distilleries nearby). Midweek rooms start at a World of Hyatt member rate of $148, or $154 for non-members. Redemption stays for this reward Category 3 hotel start at 12,000 World of Hyatt points.

Dublin has a lot to discover, whether you’re looking for a big night out or even if you are looking for child-friendly things to do. There are plenty of foodie activities to do as well like explore the Guinness Storehouse and experience one of Dublin’s food and drink tours.

The Oak Room at upmarket Adare Manor got its first Michelin star, becoming the only starred restaurant in County Limerick. Chef Michael Tweedie focuses on Irish fare including a Tipperary quail with a quail raviolo. The setting is also gorgeous, overlooking gardens and the River Maigue. Michael and his team covered almost 1,800 miles together on a road-trip tour of Ireland getting to know growers and farmers and building a family of suppliers.

Shannon International Airport (SNN) is just a 30-minute drive away.

Adare Manor is one of Ireland’s top five-star luxury hotels, so a midweek entry-level room will set you back $427 per night, but nearby there are some excellent Airbnb options like this two-bedroom cottage by the river nearby Adare Manor.

Limerick is an interesting blend of city and country. The breathtaking Cliffs of Moher, Dingle Peninsula, 15th century Bunratty Castle & Folk Park (a short 20-minute drive) and Killarney town are all within driving distance from Adare. Limerick City (Ireland’s first City of Culture) is also worth a visit as it is the third-largest Irish city full of Georgian architecture and grand museums.

Bastion is an intimate 50-seater restaurant in this charming seaside town and is one of two Cork eateries to join the Michelin Great Britain and Ireland guide. Chef Paul McDonald and his restauranteur wife Helen run this contemporary Irish restaurant, using as much local produce as possible where all principal ingredients are of Irish origin. An eight-course tasting menu is on offer for all diners, but save space for a moreish Guinness sourdough with treacle.

Kinsale has a whole host of accommodation options. Our recommendations include The White House or The Blue Haven -- both busy and buzzy local restaurants, bars and hotels.

Kinsale is a leading Irish tourist attraction and the southerly starting point of the Wild Atlantic Way trail. As well as exploring Kinsale town center, a waterfront walk is a great way to see the area. A five-minute drive will then take you to Charles Fort on the water's edge at Kinsale Harbor. To work up an appetite, a walk around a beautiful coastal headland called the Old Head of Kinsale is one of West Cork’s most spectacular walking routes. Scilly Walk is also another beautiful route that takes you all along the estuary in the town. Finish with a pint at The Bulman pub with lovely views of the marina from across the water.

Given this Northern Irish eatery isn't technically in Ireland, it gets an honorable mention (although Americans will have to wait to visit due to current COVID-19 border restrictions). The Muddlers Club in Belfast became the third Northern Ireland restaurant to receive a Michelin star. Named after the secret society that met there over 200 years ago, chef and owner Gareth McCaughey hand picks ingredients daily from the best of homegrown Irish produce, offering an enticing tasting menu (that caters for vegetarians and vegans) and a lunch menu, too. The open kitchen provides a sense of theatre and allows you to look on as Irish ingredients are transformed into masterpieces.

Muddlers Club is just 19 miles from Belfast City Airport (BFS). From the airport, you can take a local shuttle bus into Belfast or grab a taxi for around $30.

There are many hotel options in Belfast with two good Radisson Rewards options: the Radisson Blu at 44,000 points per night and the Park Inn at 38,000 points per night. If the Belfast Titanic museum and other Titanic Quarter sites are your prime reason for visiting, then you might want to stay in the Titanic Quarter so you can easily walk to all the sites in this area, although you can walk to the Titanic Quarter from central Belfast if you stay at the above Raddsions, which are a five-minute car ride away or a brisk 30-minute walk.

Belfast is probably best known for being where the RMS Titanic was built. Today, Belfast is a lively historic city that is less crowded than Dublin with its famous Titanic Quarter, pubs, museums, hundreds of street murals, gardens and much more. A great way to get around is with hop-on hop-off sightseeing buses. The Cathedral Quarter, named for St Anne’s Cathedral, is the city’s historic trading quarter and is packed with Victorian architecture, cobbled streets, and quirky little pubs. If you are there on the weekend, Tea on The Titanic is well worth doing. Step back in time to a period of luxury, elegance and five-star service with a Sunday Afternoon Tea in the opulent Titanic Suite by the Grand Staircase which is a detailed re-creation of the grand dining room on the Titanic. If you have time, the Antrim Coast drive north from Belfast to the Giant’s Causeway is well worth doing for breathtaking views.

Ireland's unique climate of mild summers, winters and soft rain creates world-class produce from some of the creamiest milk to fresh seafood. There are currently 21 Irish Michelin-starred restaurants all over the island of Ireland -- including Northern Ireland -- showcasing the best of Irish produce.