How long to get to the magic: Testing Disney's Magical Express replacement, Mears Connect

Articles
Summer Hull , aka Mommy Points, ran the Mommy Points site for families who want to travel more for less using miles and points for seven years. She now heads up a variety of special projects at TPG when she isn't exploring the world with her own two girls.
Follow
Feb. 13, 2022
•
8 min read 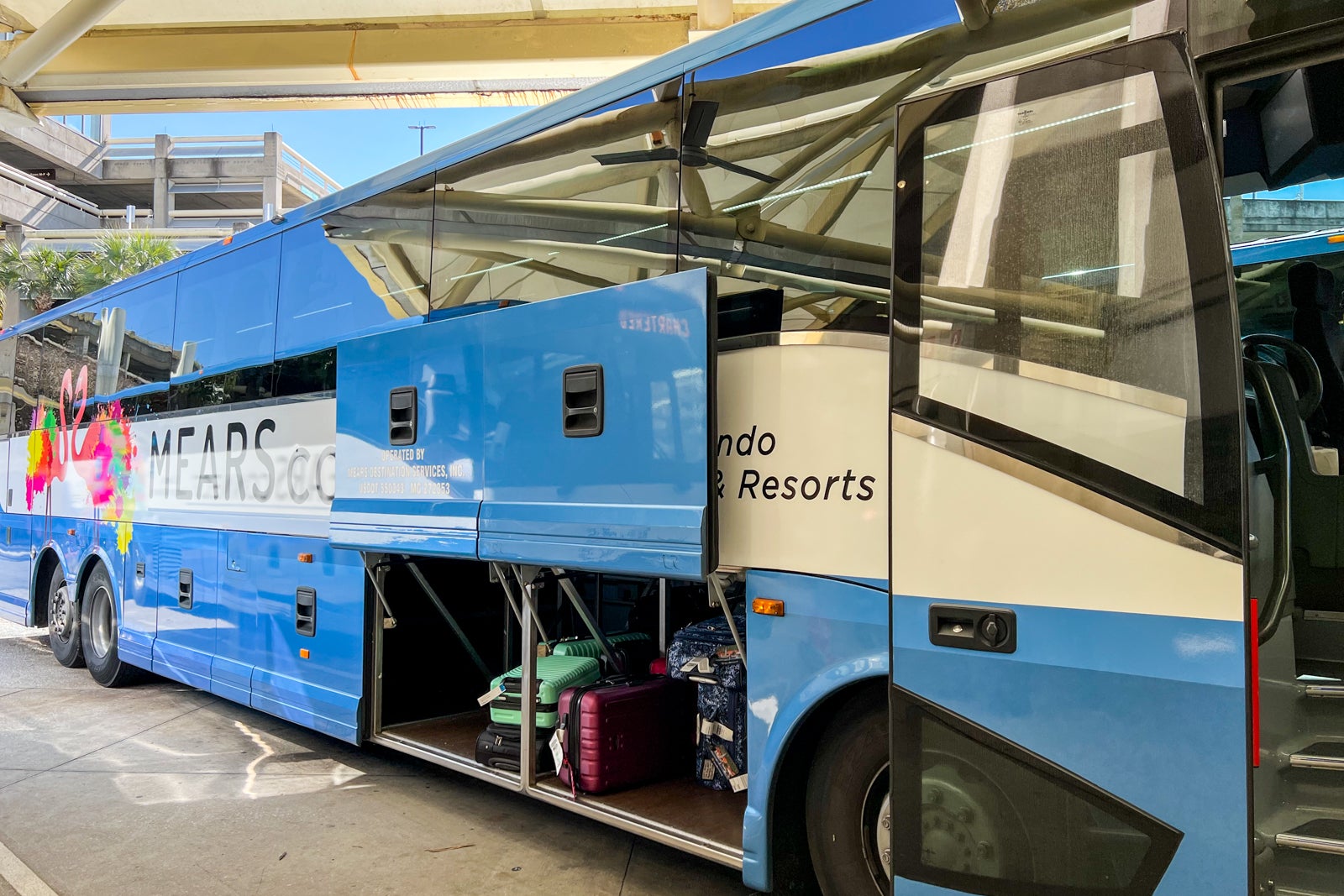 For almost 17 years, untold numbers of Disney World vacations came to an exciting start and a bittersweet, nostalgic end on the free Magical Express Bus that took Disney resort guests to and from Disney hotels and the Orlando International Airport (MCO).

However, the beginning of 2022 brought the end of the line for the Disney Magical Express Bus. Just like the free FastPasses of yesteryear, the bus — which was free to those staying at Disney resorts — is now a closed chapter of Walt Disney World history.

Now, it's going to cost you to travel the 25 or so miles between The Magic Kingdom and the airport. There are a number of ways to make this journey, but the option most similar to the now-retired Magical Express Bus is likely Mears Connect.

Mears Connect leaves from the same spot in the airport as the former Magical Express. In fact, it's actually the same buses, just with a new name — and an added cost.

Here's what it is like using Mears Connect to get to and from Disney World.

Unlike the Magical Express Bus, riding the Mears bus is going to cost some cash. However, unlike the Magical Express Bus, it's open to more than just true Disney Resort guests. The Mears bus service not only serves all Disney Resort guests, but also to those staying at other, nearby resorts such as the J.W. Marriott Bonnet Creek, the Swan, Dolphin and Swan Reserve complex and other Disney Springs resorts.

The price is the same no matter which resort you are at. Mears Connect introductory rates come in at $16 each way per adult, $13.50 for children ages 3-9 and no charge for children under 3. There's no discount for booking a round trip on the bus service versus two one-ways.

For what it's worth, the $16 charge did code as travel for me, thus earning 3 points per dollar on the Chase Sapphire Reserve. If you wanted to use points and miles, or credits that work towards travel charges on the card, such as those from the Capital One Venture Rewards Credit Card, you probably could.

Another available option is the Mears Express service, which offers a direct trip from your resort to and from the airport, although the ride may still be shared with other people. That prices much higher, at $250 per round trip for up to four people, with additional people costing $55 each. Unlike the bus, this cannot be booked as one-ways and must be booked as a round trip.

Where to board Mears Connect

Mears trips from the airport board exactly where the Magical Express Bus used to board — at Terminal B on Level 1 (aka the ground transportation level). You'll find approximately the same set-up as before, just without the Disney branding.

A difference now is that instead of scanning your Disney Magic Band, you scan your QR code from Mears.

There are still lanes that you are placed in depending on which bus you will board, though they seemed to group a wider array of resorts together in one lane (each for one bus) than in my previous Magical Express rides.

How long did Mears Connect take to get to Disney World

On my recent mid-week test ride, it took 12 minutes from when I scanned into the Mears Connect area until we boarded the bus, which didn't feel much different from my years of Magical Express rides.

But, what happened next took a bit longer.

After boarding the bus, 13 additional minutes ticked by before we departed the airport area. The driver was very friendly and knowledgeable, though gone are the videos that would play on the TV screens as you made your way to Disney.

Traffic was light on this midweek early afternoon, so it took just 24 minutes from the time we left the airport until we crossed under the famed Disney World arch, which signals the true beginning of all great Disney vacations.

Unfortunately, 23 more minutes would elapse until I was dropped off at the Swan Reserve, as the bus first made stops as the Art of Animation, Pop Century and Beach Club. Those staying at the original Swan resort had a few more minutes to wait after dropping me off, as that was the last of five stops for this bus.

In total, it took from 12:53 p.m. until 2:05 p.m. — or an hour and 12 minutes — to get from the Mears section of the airport to the front door of my resort. It's likely that an Uber could have gotten me there in less than half the time — however, it would have cost about double the price of my $16 bus ride.

While I haven't yet used Mears for a return trip to the airport, the website states that your return ride should leave at least three hours before a domestic flight and four for an international one, which is roughly how the Magical Express operated. For those with PreCheck or Clear it often results in well over an hour of extra time at the airport, sometimes more.

I'm really glad that Mears is still around, as it is essentially what powered the Magical Express Bus in the first place.

For some families, it's just easiest to not worry about car seats, trunk room for strollers or ride-hailing apps. They can simply head down two levels in the airport after arriving on their flight and let someone else worry about getting them and their stuff to their resort.

A family of two adults and two children (ages 3-9) will need to hand over $59 per direction of travel on Mears Connect. That's likely just a fraction of the cost of a Disney vacation, but it would probably be more expensive than a private and direct Uber or Lyft ride.

Mears Connect is probably most worth it when traveling with a small number of people, such as on my solo trip, or when you want to avoid having to deal with things like car seats. Mears is also wheelchair-accessible, which of course isn't the situation for all Ubers.

Mears is also more worth consideration when you have time to spare. For example, if all you have to do on your day of arrival is get settled into your resort, it probably doesn't matter as much if it takes 35 or 75 minutes to get from the airport to your hotel.

However, if you plan to head straight to a dining reservation or into a park, losing precious minutes off your vacation may not be the best plan because, at Disney, time is money. Additionally, if you didn't enjoy using the included Magical Express Bus in the past, you certainly won't be happy now paying for Mears Connect.

Related: Is Disney's Genie+ worth it? Here's how it saved me 3 hours in line

The end of the line for the Magical Express service doesn't have to mean the end of hopping on a bus from the airport and heading to your Disney or Disney-adjacent resort.

While this bus service is no longer included in the cost of your hotel stay, doesn't have the Disney branding and may include an extra stop or two than it used to, for those who want to keep things simple, Mears Connect will still get you to "The Most Magical Place on Earth" — just perhaps with slightly less magic than before.

Related stories
Great deal: Book business class tickets at premium economy prices with this Avianca LifeMiles sale
Holiday gift guide: TPG’s 22 travel-friendly picks for 2022
Vail Resorts lift-ticket sales capped; buy your Epic Pass by Dec. 4
These Black Friday hotel deals can save you hundreds on your next stay
Featured image by (Photo by Summer Hull/The Points Guy)
Editorial disclaimer: Opinions expressed here are the author’s alone, not those of any bank, credit card issuer, airline or hotel chain, and have not been reviewed, approved or otherwise endorsed by any of these entities.