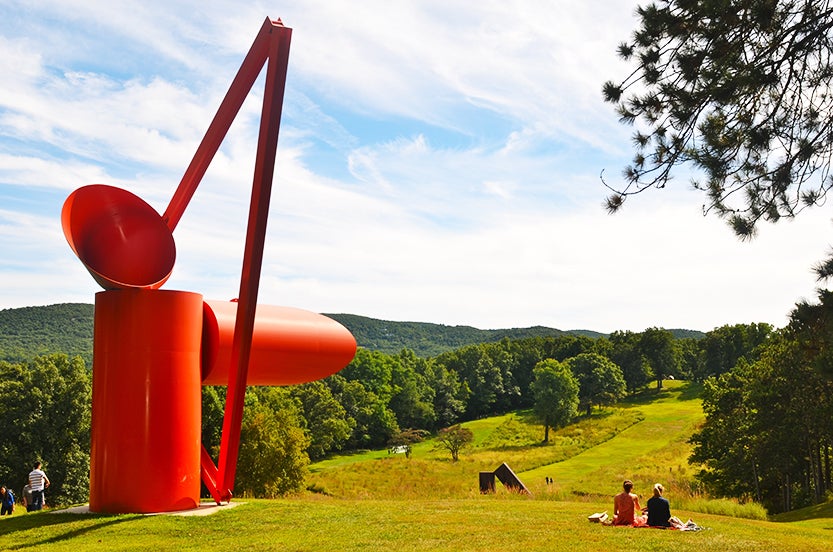 Let’s face it: New York City can be exhausting. Whether or not you're a local working in Manhattan or a visitor in town for the week, the Big Apple is an overwhelming place. And sometimes, you just need to escape. Fortunately, just a short drive beyond the New York metro area is the Hudson Valley — a perfect destination for travelers in need of a serene reprieve from the city.

From exploring Storm King’s 500-acre sculpture park in Cornwall-on-Hudson, to hiking the highest peak in the Hudson Highlands in Beacon, the Hudson Valley is home to countless galleries and historic attractions that prove a worthy match for the neighboring metropolis. (Only here, instead of skyscrapers, the sky is punctuated by mountains and towering pines.) And though it's especially lovely during the summer, when the city is steaming, the Hudson Valley is a great year-round getaway for weary New Yorkers and tourists interested in getting to a greener side of New York state.

The next time Gotham leaves you feeling more than a little breathless, don't panic — you can be in one of these gorgeous New York towns in two hours or less.

Only 50 miles north of Manhattan, this riverfront town is home to Storm King Art Center, a 500-acre sculpture park that opened in 1960. With more than 100 different sculptures and artworks installed along the rolling hills, the park has earned a reputation as one of the world’s leading sculpture preserves. Storm King, which you may recognize from its appearance in the second season of "Master of None," has works from some of the world’s most acclaimed and influential artists, including Maya Lin (be sure to check out her breathtaking Wavefield installation), Mark di Suvero and Zhang Huan. If the weather allows it, the grounds are perfect for a picnic — you’ll find a café at the visitor’s center if you don't remember to pack one. For a more efficient trip around the park, the park also offers bike rentals and tram rides. During the summer, Storm King has extended hours, staying open until 8:00pm on Fridays and Saturdays. But even when the days shorten and the temperatures plummet, you can still bundle up and visit the sculpture park as late in the year as December 9.

Don’t miss: Do you consider yourself a serious oenophile? Fifteen minutes from Cornwall is Brotherhood Winery in WashingtonvIille, which claims to be the oldest winery in the United States. Founded in 1839, the winery was added to the National Register of Historic Places in 2000, and offers tastings and tours through its underground cellars for just $10.

Where to stay: Book an Airbnb, like this unique one-bedroom octagonal house on a private hilltop overlooking Storm King Art Center and Black Rock Forest. For just $185 per night, the mid-century glass building offers stunning views, but be prepared to meet unexpected guests roaming the property (deer, wild turkeys, groundhogs). You’ll even find a large, Storm King-esque structure in the front yard. When reserving an Airbnb, don't forget to put the purchase on your Chase Sapphire Reserve card to earn 3x points.

At nearly 2,000 feet, Beacon Mountain — just south of downtown Beacon — is the highest peak in the Hudson Highlands. There's a scenic trail that offers stunning views of the Hudson River, plus an overlook of the century-old ruins of an abandoned casino. Aptly named the Casino Trail, the casino was a major tourist attraction in the early 20th century, but it burned down in 1927. If you’re feeling particularly adventurous, you’ll also find a 250-foot-high, 72-step fire tower that offers great views of the river, the Catskills and, on a clear day, the New York City skyline. And don't be nervous: the tower was renovated in 2008 and added to the National Registry for Historic Places soon after, in 2009.

Don’t miss: Beacon is home to Bannerman’s Castle, located on the small 6.5-acre Pollepel Island in the middle of the Hudson River, just south of downtown Beacon. Named after Francis Bannerman in 1901, the picturesque castle was originally used as a military surplus, selling scrap metal and munitions. Much of the castle is in ruins today, but the beautiful foundation of the structure is still intact. Bannerman’s Castle Trust Inc. offers walking tours and kayak tours from May until October.

Where to stay: Beacon has its share of unique Airbnb’s, but don’t miss out on The Roundhouse at Beacon Falls. This collection of 19th-century factory buildings offers gorgeous, industrial-inspired rooms overlooking Fishkill Creek. Rooms are furnished with thoughtful extras (Keurigs, cozy alpaca blankets) and the property doesn't skimp on amenities. Reservations at The Roundhouse include complimentary onsite parking, Wi-Fi and daily hot breakfast. Use your Capital One Venture Rewards Credit Card to book your room through Hotels.com through Jan. 31, 2020, to get 10x miles on your stay. And don’t forget that the Hotels.com Rewards program gets you one free night for every 10 paid nights you stay, effectively boosting your return to 20% when you pay with the Venture card.

Woodstock, New York, as it happens, wasn't the location of the legendary Woodstock Music & Art Fair in 1969 — that was located about an hour and a half away in Bethel. But you wouldn’t know that in Woodstock, where the town celebrates the eponymous festival and features a main drag lined with touristy head shops and tie-dyed T-shirts. Downtown Woodstock features an array of cute bookstores and antique shops, and it's easy to spend a long weekend window-shopping. Time your trip right, and you could experience a reading at the independent Golden Notebook bookstore, which holds dozens of author events per year and partners with the annual Woodstock Bookfest, which celebrates its 10th anniversary next March and attracts authors from around the globe for book talks, classes and keynotes.

Don’t miss: When you've worked up an appetite with all that groovy Woodstock sightseeing, head to the famed Phoenicia Diner right off Route 28. The greasy spoon was built in 1962, but closed down and reopened in 2011 under new management. The menu features an eclectic mix of diner classics and more modern dishes (think: patty melts and, of course, avocado toast), and occasionally hosts live musical performances.

Where to stay: For large families or those traveling with a group, consider The Shady House, located just outside downtown Woodstock. This four-bedroom Airbnb is located in the Catskills, and has access to a private swimming hole at the foot of Cooper Lake, plus a Jacuzzi and large backyard. For those looking to stay closer to town, Hotel Dylan transports guests back in time to the 1960s. The bohemian hotel offers a number of amenities, including access to the pool and an impressive collection of vinyl records (each room is equipped with its own record player). Book either stay with your Chase Sapphire Reserve card to earn 3x points, or reserve a room at Hotel Dylan on Hotels.com to get 10x miles on your stay when you use your Capital One Venture Rewards Credit Card.

Featured image by (Photo by Shutterstock.com)
Editorial disclaimer: Opinions expressed here are the author’s alone, not those of any bank, credit card issuer, airline or hotel chain, and have not been reviewed, approved or otherwise endorsed by any of these entities.