TPG's guide to the biggest Holi Festival parties in India

Articles
Alexandra Owens is a freelance writer and contributor to TPG. She also creates content for travel brands, including Delta and Hilton Honors. In her spare time, Alexandra is always planning her next trip, whether it's kayaking through Phang Nga Bay's limestone caves or hunting down the best Orxata in Valencia.
March 01, 2020
•
10 min read 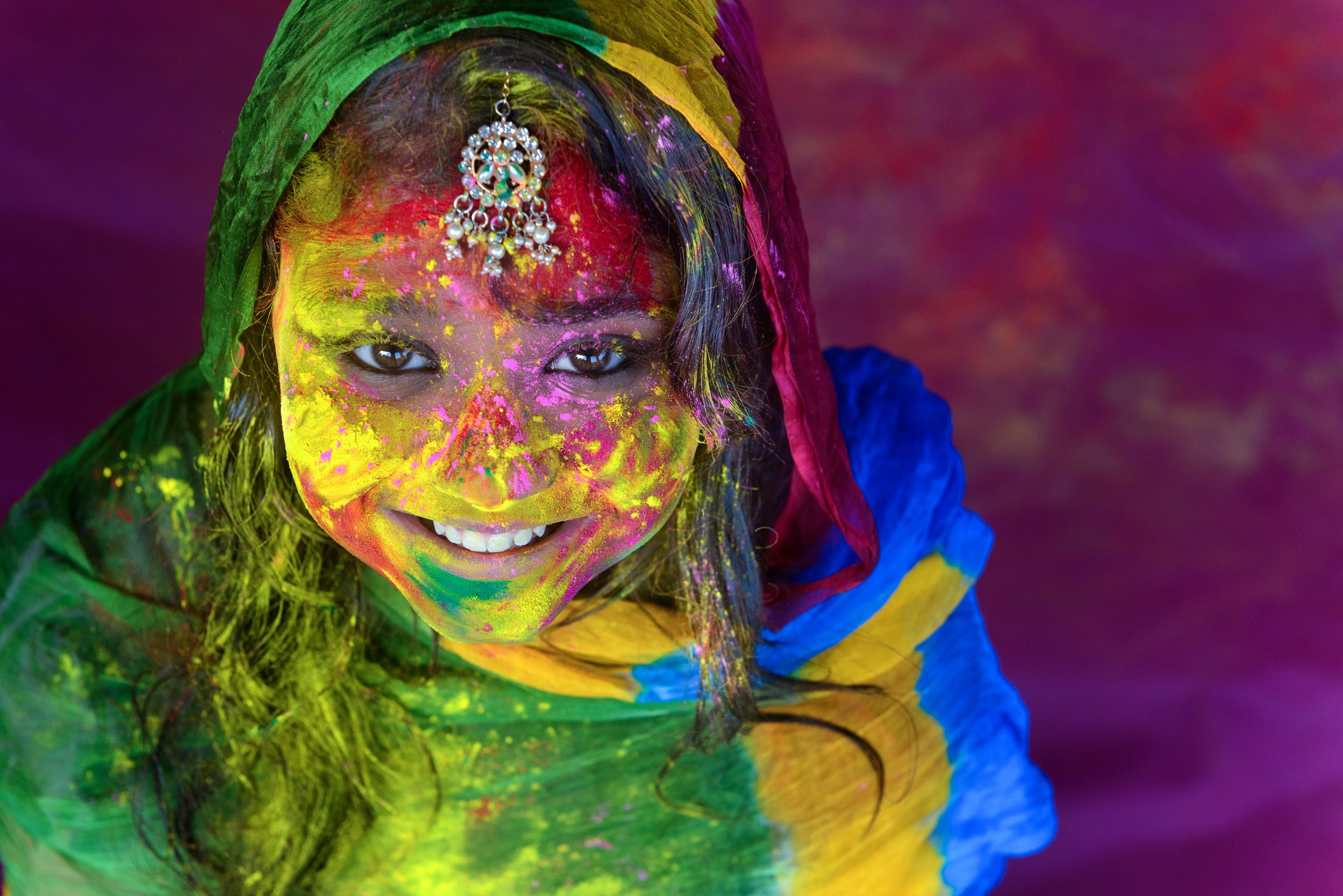 You may not know about Holi but you probably know what it looks like: entire cities covered in neon yellow, pink and blue and kaleidoscopic crowds dancing, singing and bringing new meaning to the phrase “riot of color."

Known as the “festival of colors” in India, Holi is a unique experience worth traveling for (even though it means booking a long-haul flight to India).

Here’s how to navigate the famed Hindu festival --– and a whole lot of kids with water balloons -- like a pro.

But what does Holi represent and what are its origins? Holi is, in fact, about more than throwing colorful powder at your friends.

No one can totally agree on how Holi started or how long it’s been celebrated. What we do know is that it’s pretty ancient. One Sanskrit inscription that references Holi dates back to 300 B.C.

The purpose and meaning of Holi seem to have evolved over the centuries. Historians believe it probably originated as a special rite for married women. Once a year, they’d worship the full moon and ask it to grant their families well-being and prosperity. Today, Holi still honors the moon, fertility and love -- but that’s where the similarities end.

Now it’s better known as a religious and cultural celebration of the beginning of spring, the triumph of good over bad, and rebirth. Think of it as a holiday for renewal and spring cleaning. Seriously, in some parts of India, like Bihar, cleaning your home is part of the deal.

A two-day festival, Holi always starts on the last full moon of the Hindu luni-solar calendar month that marks the end of winter. In 2020, it will take place on March 9-10. Holika Dahan, popularly dubbed “Small Holi,” kicks everything off with an evening bonfire on the first of the two days, symbolizing the burning of evil. In the morning, the better-known portion of the festival, Rangwali Holi, gets started. This is when people dance, eat sweets and get rowdy.

Both of these events have ties to popular tales in Hindu mythology. Holika Dahan commemorates the story of Holika, a demon whose evil intentions are foiled when she is burned to ashes on a pyre. Rangwali Holi harks back to the legend of Radha and Krishna (a major Hindu god who is often depicted with blue skin). Krishna admired the fair Radha, the legend says, and after they playfully smeared artificial colors on their faces so they would match, she fell in love with him.

Where is Holi celebrated?

Holi is celebrated around the world, but it’s at its biggest and most colorful in Uttar Pradesh, a state in North India. The neighboring holy cities of Mathura and Vrindavan are particularly known for their jubilant and wildly popular celebrations because they mark where Krishna is said to have been born and grown up. This is where you’ll find the most traditional, over-the-top Holi festivals.

However, the celebrations aren't limited to Uttar Pradesh. The entire country of India celebrates Holi and many cities have unique customs. Where you decide to travel depends on what kind of experience you want and what other sites you’d like to take in during your trip. Rajasthan, Jaipur, Udaipur and Pushkar are excellent places to see and participate in Holi because of their accessibility, inclusiveness toward tourists and beautiful architecture. Home of the Mewar royal family, Udaipur also offers the opportunity to witness an extravagant procession and fireworks.

Related: A guide to family travel in India

What to expect during Holi

First up is Holika Dahan, the bonfire night. Several days beforehand, locals will collect wood and other flammable materials and construct pyres on street corners and in parks and other open spaces. At sunset, an effigy of Holika -- recalling the Hindu legend -- is placed on top of the bonfire.

As the flames grow, people perform puja (prayers), sing and dance, celebrating as they watch “evil” burn and good triumph. Once the fire goes out, some Hindus smear the ashes onto their limbs for symbolic purification. It is Holi’s most religious tradition and the whole affair is rather subdued. You’ll need your energy for tomorrow anyway.

If you’re looking to participate, you can purchase powder -- known as gulal -- and your weapon of choice at street stands. You’ll have your pick of colors, each with a different meaning in Hindu. For instance, green symbolizes life and new beginnings, while yellow represents knowledge.

One of the beautiful things about Holi is that the rules of India’s caste system are abandoned for the occasion. People of different classes, ages and genders color each other as an act of friendship and goodwill -- and truthfully, by the end of the day, it will be hard to tell who anybody is anyway.

Aside from the main event, there are often drums, singing and impromptu concerts on the streets. But it’s not Holi until you sample some traditional snacks. Gujiya, a fried pastry similar in shape to an empanada, is stuffed with spiced, chopped nuts and milk solids (mawa). Puran poli, another Indian sweet made especially for the holiday, comes rolled with sugary lentils. And there is thandai, a creamy milk drink flavored with almonds, cardamom, fennel, and rose petals -- sometimes served with bhang, a preparation of cannabis that’s popular with revelers and considered by many to be a customary part of the festivities.

Related: 5 foods you must try on a trip to New Delhi, India

As with any big, rowdy gathering, it pays to be aware of your surroundings during Holi. Foreigners -- and women in particular -- draw attention. We recommend traveling in a group for safety in numbers and using common sense when it comes to imbibing. Go out in the morning if you want to avoid the height of the party at midday. Holi doesn’t have an official ending but it tends to wrap up in the afternoon.

How should you dress? Whatever you wear to Holi is almost definitely staying at Holi. We recommend inexpensive flip-flops that you can throw out and clothing that will protect your skin from the powder (leggings and a traditional white kurta -- the familiar long, loose shirt often worn in South Asia -- are perfect). Gulal is natural and safe, but some powders are cheap synthetics that can irritate the skin. For that reason, large sunglasses are also recommended for Holi.

Related: How to check the safety of your travel destination

All that color may cry out for photography, but leave your camera at the hotel (one well-aimed water balloon later and you’ll thank us). Make sure that your phone and other belongings are protected in waterproof cases or bags.

Once the celebrations are over, wash your face and shower with lukewarm water as soon as possible to remove the colors. If you already prepped your exposed skin and hair with coconut oil, this task will be much easier.

Strangers touching you and smearing colored powder all over your face is a big part of Holi, but say no if you’re uncomfortable and don’t be afraid to flag down help if needed.

Where to stay during Holi

A bit off the beaten path, Mathura and Vrindavan offer a glimpse into an India many people don't normally get to see -- but these places don’t often cater to tourists. Most of their small hotels and guest houses are already at capacity for Holi 2020 (though a few hotels, such as Hotel Ganpati Palace, Anandam Clarks Inn Suites and Hotel Abhinandan still have space).

A better bet? Agra. The trip is roughly 90 minutes by car to Vrindavan or an hour by train to Mathura. Agra is home to three UNESCO World Heritage Sites including the Taj Mahal, so it makes the perfect home base for sightseeing and your Holi experience.

Agra also offers a wider selection of points hotels, such as:

How to get to Holi

Indira Gandhi International Airport (DEL) is the closest major airport to Mathura and Vrindavan. To reach Agra, you’ll need to take one of the two-hour high-speed trains. (Agra’s own Kheria Airport (AGR) primarily functions as an air force base and offers only an irregular schedule of domestic commercial flights.)

One of the busiest airports in the world, DEL is set to grow even bigger by 2022. From the U.S., nonstop choices include United (from EWR and SFO) and Air India (from JFK, SFO, ORD, and IAD). Air Canada, Lufthansa, and Cathay Pacific are also great picks.

It's not often when we travel that we get to experience a true feeling of community. By visiting India during Holi, you're not just embracing strangers, but opening yourself up to some of the most important traditions in the Hindu culture. That makes for a memorable vacation.