Why You Might Want to Dress Your Best When Flying

Articles
Jordi Lippe-McGraw is a writer covering travel, family, food and wellness for outlets like Conde Nast Traveler, Travel + Leisure, the New York Times, Forbes, and more. She has traveled to more than 30 countries on all 7 continents (including Antarctica at 5 months pregnant) and is an avid puppy, penguin, and truffle lover.
Follow
Dec. 30, 2018
•
7 min read 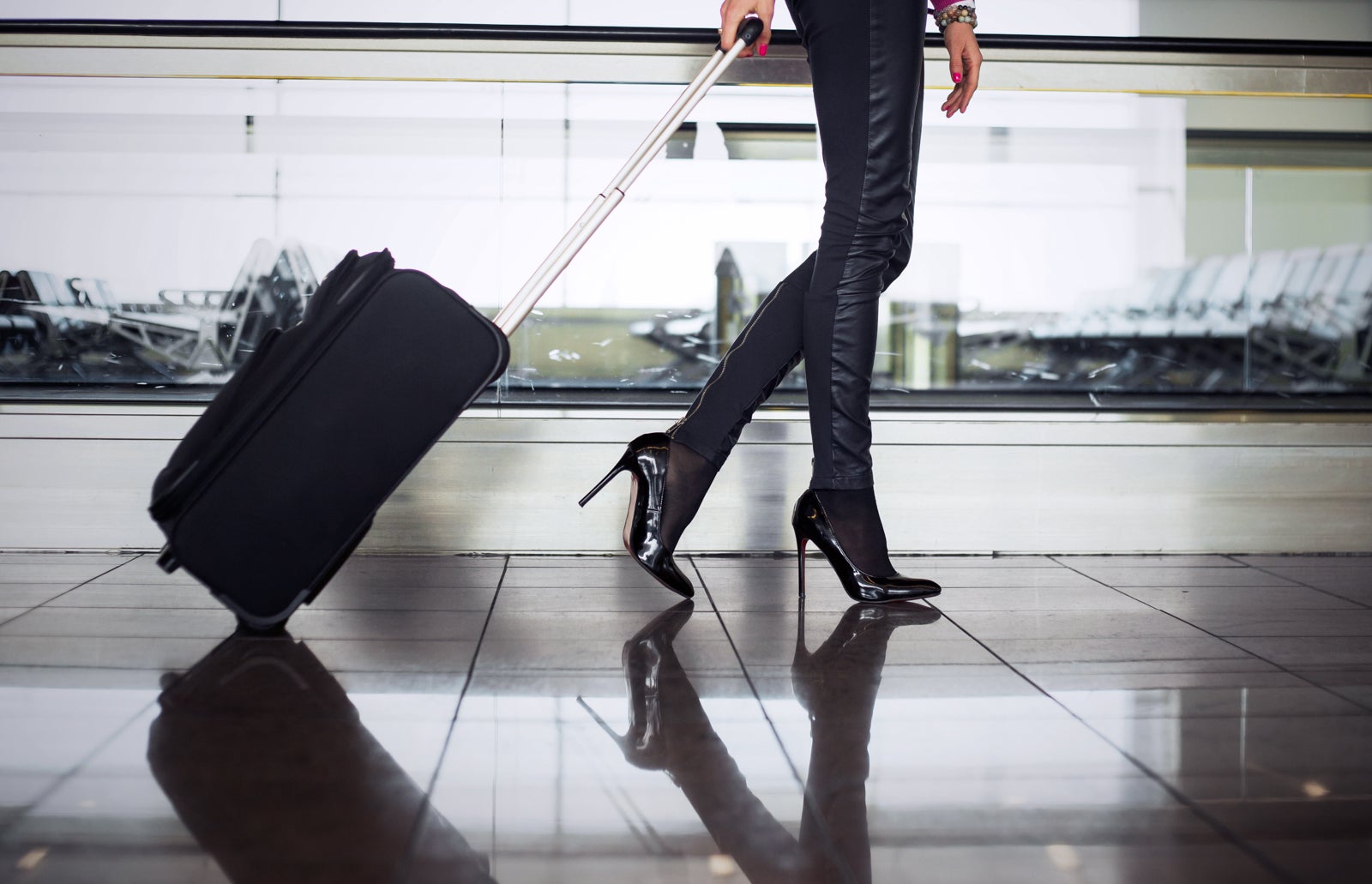 Welcome to Travel Etiquette, a TPG column that explores the fragile social contracts and the delicate dos and don’ts of travel. Have an opinion or suggestion for a future subject? Sound off in the comments below.

Most people will tell you that the Golden Age of travel is gone. Flight attendant trolleys piled with carved meats and Champagne bottles have been replaced by carts stocked with crumpled bags of pretzels. Ask most people what they think of flying, and you’re not likely to get a descriptor like "luxurious.” But just because travel has become a less opulent experience, does it mean we should dress like we're on our way to the sofa to watch Netflix?

I chatted with jetsetter and model Chrissy Teigen recently, and she told me that she'll dress up for a flight because she thinks flying is still very much a luxury we shouldn’t take for granted. Plus, there’s a belief that dressing up could actually score you an upgrade. Meanwhile, other frequent travelers I spoke to believe we should strive for nothing more than comfort while traveling. So, what should you do? Here's what the experts had to say about dressing your best at cruising altitude.

“While you don’t need to dress to the nines for your flight, I still recommend dressing respectfully when you travel,” said Myka Meier, etiquette expert at Beaumont Etiquette. “Whether it be for business or socially, you never know who you will meet. Perhaps you’ll be sitting next to your next client, your future friend or even your next date."

And according to Meier, dressing for a flight (at least, putting on real clothes) is just polite.

"Dressing in pajamas for a day flight or taking off your shoes while traveling on a short haul flight are not recommended, as you are sharing a communal space with others and you should therefore dress and act respectfully so that everyone around you feels comfortable. Etiquette is all about thinking of those around us before ourselves.”

For travel writer Dylan Essertier, dressing up is more of a symbolic gesture than everything, but it's still important.

“My mom was a flight attendant for TWA and still has her uniform, which was designed by Ralph Lauren. Growing up, we were always taught by her that travel is a privilege,” Essertier said. “Whenever I get on a flight, I try to look as polished as possible. I see this as both a tribute to my mom as well as my little celebration to honor the special occasion of getting to fly to a new place.”

In addition to respecting your seatmates, the flight crew and the great tradition of flying in general, the clothes you wear can be a way of demonstrating self-respect, too.

“In the Buddhist tradition I’m a part of, there’s this concept of ‘uplifted dress,’” said Kitty Kaler, a Club Bébé Voyage member. “When we dress up, we feel different. It wakes us up. We might even advocate for ourselves better. It’s less about how we are perceived than it is about how we feel.”

No, you should not expect a suit jacket to get you a lie-flat seat. But one flight attendant says it's not all mythology, either.

“Dressing up could get you an upgrade,” former flight attendant and travel host, Bobby Lauries, told TPG. “But, only if you're nice to the flight crew and maybe [also] bring them a few treats like chocolates or Starbucks gift cards.”

And Lauries isn't the only person who says dressing up could score you perks typically reserved for business class passengers — even small, thoughtful gestures. Simply looking like a businessperson could get you the same level of service.

“I get free drinks all the time when I’m in business clothes, and there’s a delay,” said frequent traveler and Turner PR chief strategy officer, Angela Berardino. “The people in yoga pants do not. Flight attendants know to take care of business travelers."

It's also been said that travelers already in line for an upgrade could be passed over if they're not dressed appropriately. So maybe the way you dress can't help you, but it can certainly hurt (especially if you're a non-revenue passenger).

If you're already sitting in the front of the plane, according to Meier, you should dress the part.

"Good etiquette when dressing means that we always mirror the environment we are in," Meier said. "When traveling business class, it’s important to always wear clothing that is considered business attire. I always recommend [dressing] for the occasion or environment you are in, and just as you would dress more formally for a nice restaurant, you are expected to do the same when flying. This is not only out of respect for the establishment, or airline class, but for the other passengers onboard your class."

So what about those cozy pajamas in Cathay first? Yes, Meier said, of course it's fine to change into sleeping attire on overnight flights. But you'll want to head into the washroom to slip into your comfy clothes before going to sleep, as opposed to showing up at the airport like you're ready for bed. "No matter how long the flight is," Meier said, "it may be considered by many [to be] disrespectful to arrive to a flight in pajamas."

And, just to reiterate, if it's a short afternoon flight, Meier says it's best to steer clear of pajamas altogether.

Though many travelers have noticed tangible benefits to dressing up for a flight, there are just as many who say your clothes are irrelevant: so you might as well be comfortable.

“I’m a full-time traveler and have only been upgraded when flights were oversold, and that was the only seat available,” said Melissa Conn of The Family Voyage. “Airlines have such a strong focus on monetizing everything these days and are so systematic about who gets rewarded with the coveted upgrade, that the better attire doesn’t seem to make a difference.”

And for travel publicist Lanny Grossman, dressing your best for a flight is simply outmoded. “In the US," Grossman said, "the idea of getting dressed up for a flight is an antiquated thought. The gate agents have such little control these days or the desire to ‘surprise and delight’ that it doesn’t really matter if you’re wearing a tuxedo or a hoodie."

"Plus, flight loads, particularly with ‘elite’ customers, are high in first class on most major routes. So, even if you do deserve an upgrade, it’s likely not available.”

Grossman was not the only one discouraged by the sheer improbability of an available business or first-class seat. “That notion is totally out of date,” said another frequent traveler and Club Bébé Voyage member, Laura Keyes.

“The upgrade lists for most flights are several people deep nowadays. People like my husband — who is Global Services on United — will bump everyone, regardless of what they are wearing.”

For Juliet Izon, travel writer and creator of Juliet’s Married, being comfortable and stylish don't have to be exclusive. Though she's not in favor of (as Grossman put it) donning a tuxedo jacket in an effort to score a premium upgrade, Izon believes it's easy to be comfortable and fashion-forward. Or, at least, that being cozy doesn't mean donning ketchup-stained sweat pants.

"I’m a huge proponent of athleisure wear when flying,” Izon told TPG. “It’s the best of both worlds because it’s comfortable for a long-haul flight. But, if you wear a cute pair of leggings and drapey sweater you’ll still feel stylish. You can look stylish while still being casual.”