Free (or Nearly Free) Things Families Can Do in Amsterdam 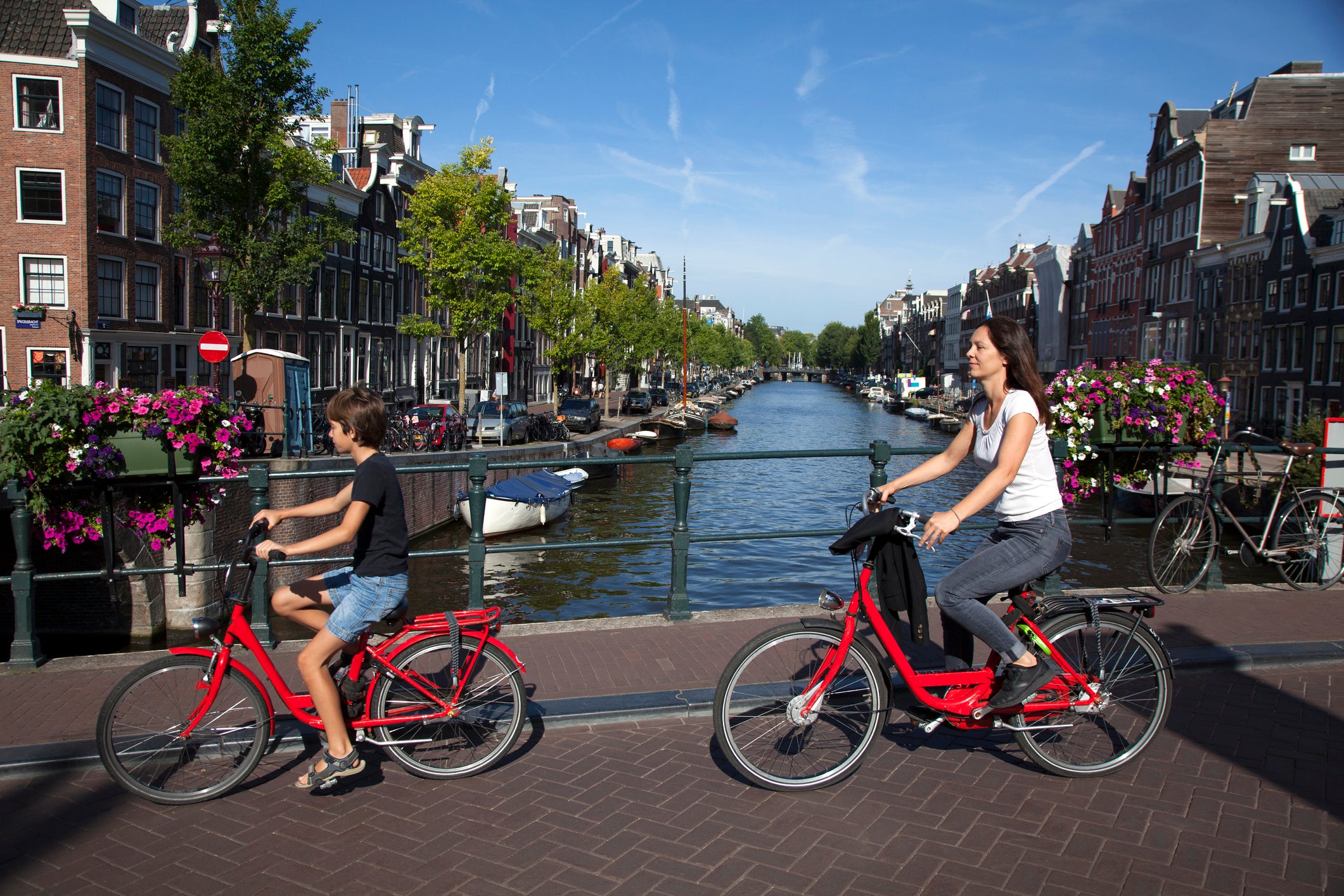 A family trip to Amsterdam, a city known for its picturesque canals, cobblestone streets and distinctive architecture, doesn't have to break the budget. Although it may not be the cheapest European city to visit, it does have dozens of cool kid-friendly things to do, many of which don't have to cost a cent. Just be sure to avoid these mistakes every tourist makes in Amsterdam.

The first thing you may notice when you arrive is that everyone is riding bicycles — or at least it seems that way. It's estimated that there are 1 million bicycles in a city of 850,000 residents. Some hotels, such as the points-friendly Kimpton De Witt, have bikes to lend to guests for free (or nearly free), so ask when you check in.

The relatively flat landscape, separate lanes for bikes and designated bike parking spots make it an easy, safe and economical way to explore the city. Many of the 30 parks have bike paths, which is a great way to enjoy the city's green spaces.

Tip: Make sure you have a strong lock for your bike, and lock it securely when not in use. Although Amsterdam is a very safe city to visit, hundreds of bicycles do get stolen each year, so err on the side of caution if you borrow or rent a bike.

Or, just get out and walk like the locals do. Amsterdam's compact city center is laid out in a series of concentric, semicircular rings of 17th-century canals with Singel Canal at the heart of the Canal Ring. Dam Square, about a half-mile from Centraal Station, the main train station, is considered the center of Amsterdam and is so named because it is near the site of the first dam that was built across the Amstel River. Amstelledamme (Amstel Dam) later became Amsterdam, the name given to the city.

Although probably less interesting for younger kids, if traveling with pre-teens or teens, consider booking a free city tour with Sandeman's New Amsterdam Tours. On this three-hour walking tour, you'll learn about the city's history and architecture as your guide leads you past many of the major sights in the central historic district, including Anne Frank's house, the Dutch East India Company, Begijnhof (Beguine convent) and some lesser-known attractions, such as the city's smallest house at Singel No. 7, the widest bridge and a hidden church. The tour, which departs several times daily from the National Monument in Dam Square, is free but tips are expected.

Instead of forking out a lot of euros for a canal boat excursion, catch one of the three free Amsterdam Public Transport ferries that cross the river IJ (pronounced "eye"), shuttling passengers from the heart of the city to the Noord (North) neighborhood. These blue-and-white ferries provide a fun boat ride for kids. No one will mind if you want to take multiple trips back and forth across the water. You can bring your bicycle on board for no charge, making this an efficient way to get to other parts of the city to explore.

Go to Centraal Station and then follow signs to the ferries, which depart from the pier behind the station 24 hours a day year-round. Check the big digital countdown clocks to find out when the next ferry for your route is arriving.

Buiksloterweg is the shortest route, going straight across the river with ferries departing around every six minutes. IJplein will take you north to a more residential part of the city, while NDSM Werf is the longest route, providing the best views of the old harbor, waterfront and ships.

Venice of the North

Amsterdam is known for its extensive canal system, earning it the nickname "Venice of the North." So it's no surprise that some of its most popular and one-of-a-kind attractions are found on or along the canals.

Bloemenmarkt, on Singel Canal between Koningsplein and Muntplein, is the only floating flower market in the world. The market, open rain or shine daily except Sundays, from 9am to 6pm, has been around since 1862 when merchants first transported their flowers up the Amstel River on barges to the city to sell.

You can wander along the canal to admire the colorful displays of tulips, carnations and other beautiful blooms for sale in more than a dozen flower stalls. What's available depends on the season, although many varieties are grown in greenhouses, so the selection is huge. Vendors also sell seeds, bulbs and houseplants and, in December, Christmas trees. If you decide to purchase something to bring home, check first to be certain the item won't be confiscated at US Customs.

Your kids may also have fun exploring Albert Cuypmarkt, the largest and best-known street market in the Netherlands. The century-old market, named after a 17th-century Dutch painter, is in De Pijp, Amsterdam's Latin Quarter. With more than 300 stalls, the diversity of items on display is staggering. Stalls are filled with everything from fresh fruits and vegetables, flowers and seafood to jewelry, clothing and fabrics. It's a good place to sample some popular Dutch foods, including pickled herring, stroopwafels (syrup-filled waffles) and poffertjes (mini Dutch pancakes dusted with powdered sugar and other toppings). Wandering is free, but don't be surprised if you buy a thing or two along the way.

If your kids adore animals, add De poezenboot to your itinerary. Translated, De poezenboot means The Cat Boat, an apt name as it is a renovated houseboat on Singel Canal (No. 38 G) that houses a number of stray and abandoned felines. Visitors are welcome to meet, greet and cuddle with the kitties between 1pm and 3pm daily, except Wednesday and Sunday. Try to arrive early as only a limited number of people are allowed on the boat at one time, so you may have a short wait. Although free to visit, donations are encouraged.

Amsterdamse Bos has bike paths, speeltuins (playgrounds), forests and lakes but one of its main attractions for families is Geitenboerderij Ridammerhoeve (Ridammerhoeve Goat Farm). Here, kids can get up close with goats, cows, lambs, horses, chickens and pigs. Depending on the time of day, they might find farmers feeding the animals, milking the goats, making cheese or doing other chores and may even get to bottle-feed a kid (baby goat).

For more animal encounters, take the family to the De Pijp Petting Zoo and Amstelpark Petting Zoo to visit the friendly farm animals. The latter was originally built for the Floriade, an international horticultural exhibition in 1972 and still has a number of gorgeous gardens, playgrounds for different ages and a labyrinth, all for free. For a very nominal fee, kids can ride the merry-go-round, drive mini cars, operate a remote-controlled boat, take a train ride with Thomas the Tank Engine or even dig in the sand with an excavator.

Amsterdam has a number of playgrounds scattered throughout the city, including in its many parks, which also typically have ponds, forested paths for walking and biking, and plenty of open grassy spaces, perfect for picnicking. Or visit the garden by the Rijksmuseum, among the world's largest art and history museums, in the Museumplein, which, as the name suggests, is home to several of Amsterdam's 75 museums. In addition to the flowerbeds, fountains and summerhouses, this garden has a delightful children's garden with a playground.

The largest, and most popular park in the city is Vondelpark, not far from the Rijksmuseum. It's a favorite with families for its many play areas, giant wading pool and wooden tree houses connected by swinging rope bridges.

On Saturday afternoons throughout the summer, free entertainment, including puppet shows, music and performances by acrobats, is offered for kids at the Openluchttheater, the park's open-air theater. Check the weekly schedule for other events with family appeal, including concerts and dance performances. Although most of the programs are in Dutch, the country's official language, you won't need a translator to enjoy the entertainment.

Although accommodations can be pricy, you can save in Amsterdam by using points to book. If you plan to mostly walk or bike instead of relying on public transportation, then you will want to stay in or near the central historic district.

Though keep in mind that most of these properties do not sleep more than two or three people in a standard room. There may be a surcharge to book a room for a family, or it may not be possible using points at some properties.

Amsterdam is an affordable family destination if you seek out its many free attractions and the best deals on hotels using your reward points programs. While not free, we also would be remiss to not mention that tickets to the popular Anne Frank House can be booked online exactly two months in advance. Tickets to this house/museum are free for children 9 and under, €5 -€10 for older kids and adults, and do routinely sell out.

Have you been to Amsterdam? What activities did you kids like best?

RELATED VIDEO:
Are We There Yet? | The Ultimate Travel Stroller