Cooking on the rails: What it takes to create a gourmet menu on a train 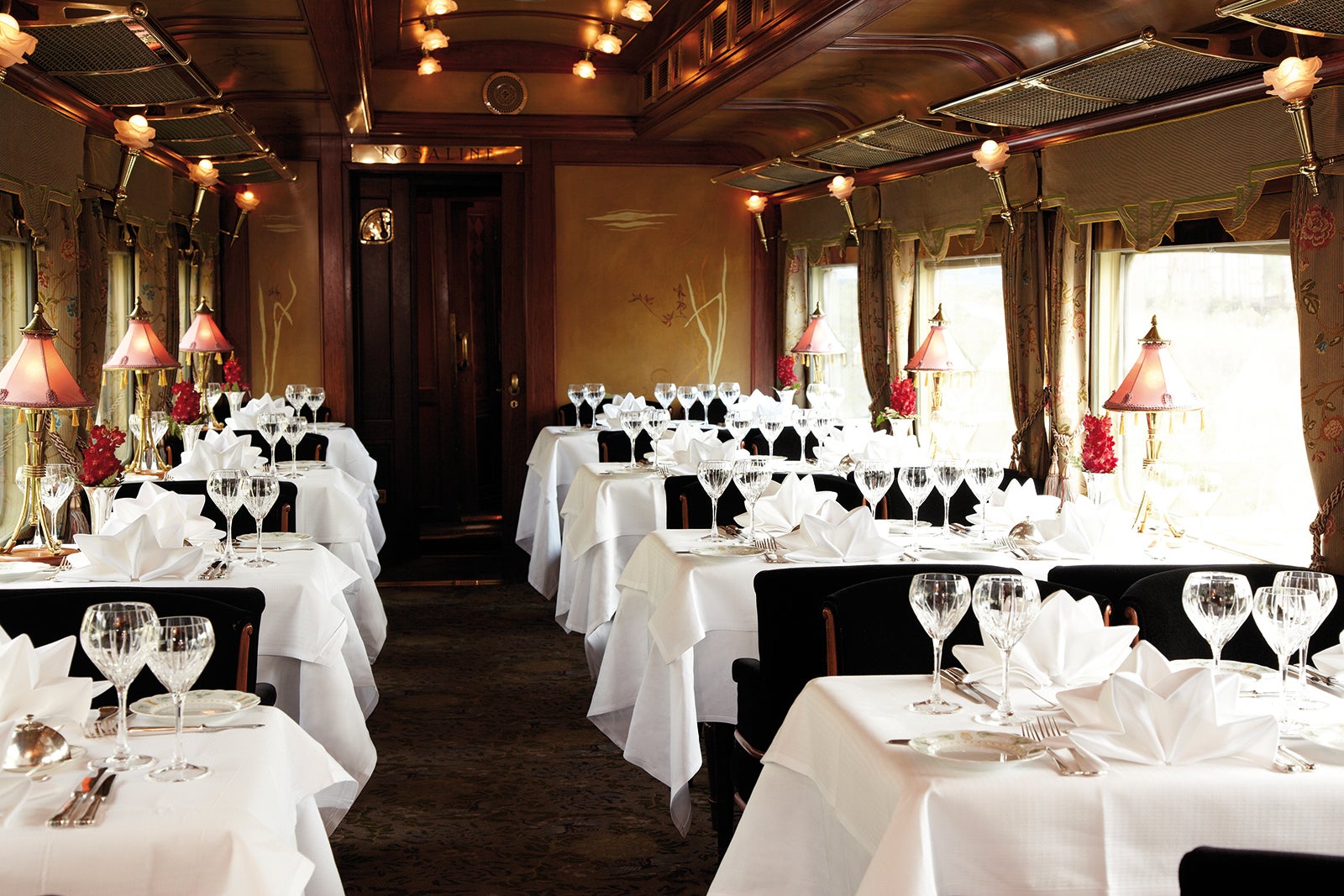 Far from the prepackaged sandwiches and bags of potato chips you can expect to find on most trains, luxury trains serve decadent multicourse meals with fine wines. In fact, a big part of the experience aboard these kinds of trains is dressing up for dinner in the dining car, where the tables are adorned with white linens and servers present gourmet dishes on fine china.

But as you can imagine, cooking and serving a gourmet meal on a moving train presents its fair share of challenges. We spoke with Maryke Reuvers, the chef who designed the menus for Rovos Rail (a luxury train that runs multiday journeys in southern Africa) to get the scoop on what it’s really like.

The Vos family, which runs Rovos Rail, reached out to Cape Town-based chef Maryke Reuvers in 2018 to update the menus, train their chefs and implement new systems in the train’s food department.

After graduating from culinary school in 2002, Reuvers cooked at hotels, restaurants, wedding venues, on a cruise ship, on movie sets and at the private villas and penthouses of wealthy clients. She has done food styling for commercials, TV series and movies, and has helped manage large events catering to thousands of people. Her work has brought her all over the world, from Argentina to the wilderness of Russia above the Arctic Circle.

“I do not get bored with the variety of things I am involved with and love all the challenges each project brings,” Reuvers told TPG.

When designing the menus for Rovos Rail, Reuvers tries to find a balance between authentic South African cuisine and more international dishes.

“Many different nationalities are traveling aboard Rovos Rail, and we do want to give the guests a little bit of a taste of South Africa with certain journeys by incorporating dishes with venison or the traditional ‘bobotie’ or ‘milk tart,’” she said. “But we also cannot stick to South African cuisine the whole time, as we do get a lot of South Africans on the train, and they want something a little more exotic as they are already very familiar with the South African favorites.”

She also needs to make sure guests’ dietary needs are considered. On the Durban safari journey, for example, the standard menu might feature aromatic prawns in coconut cream with basmati rice, while the vegetarian version of that dish is a chickpea and coconut curry with quinoa and toasted coconut shavings.

Each of Rovos Rail's trains can accommodate up to 72 passengers in a single seating, so the chefs need to be able to prepare four-course meals for dozens of guests.

“The kitchen carriage is normally in the middle of the train so guests don’t have to walk the entire length of the train to get to the dining room,” Reuvers explained. “It is definitely not a large space, and the assistants and the chefs all need to be able to work together in this narrow area.”

The kitchen is equipped with undercounter fridges on one side and a stove and counter space on the other. Additionally, there are a large sink, a walk-in fridge and shelves all along the walls for storing pots and pans plus dry goods.

Before each trip, Reuvers and the team create a packing list based on the number of guests who booked the journey and the menus. All ingredients then get delivered to the main kitchens in Pretoria, South Africa — the departure city for the trains.

“They do not have time to source ingredients while on a journey, so we make sure they have everything they need on the train to complete an outbound as well as the return leg of the trip,” Reuvers said. “If they do end up needing something — it might be some fresh salad leaves or fresh berries — then someone will quickly go out to get what is needed. In the main cities or towns, we have established suppliers and then we can arrange with them in time if we know of certain items that need topping up to be delivered as the train passes through.”

Related: Accor wants to take Orient Express beyond the rails and into hotels

The challenges of cooking on a train

Ever notice that on luxury trains, the presentation is nice but not too complicated? That’s because a sudden movement can ruin the way the dish looks.

“Plating dishes is challenging, and you cannot build towers or have runny sauces as the plates need to be carried by someone while the train is moving to the tables and need to look good when you put them down in front of the guests. Towers can fall, and runny sauces can look bad,” Reuvers said.

Train chefs also avoid keeping pots of boiling water or vats of hot oil on the stove for long periods of time to avoid accidents. And if something in the kitchen breaks and the maintenance team can’t fix it, the chefs just have to improvise and do their best until the train returns to the station.

One of the biggest differences between cooking on a train rather than in a hotel is that everything needs to be much more streamlined to account for the lack of space.

“On the train, you are not able to prepare your mise en place as you would in a hotel,” Reuvers said. “The only time you have for prep is the few hours before the next meal, as they do not have the space in that train kitchen to prepare ahead. So each meal is prepared from scratch just after the last meal is finished.”

Related: 4 European routes where you should take a train instead of a plane

You may not realize it, but that decadent meal you’re enjoying aboard Rovos Rail or any other luxury train took a whole lot of planning and organization ahead of time. Odds are there was some improvising by the chefs, too.

The teams working on these trains have to deal with tight spaces, the motion of the train and a lack of fresh ingredients readily available while traveling. They have to plan ahead for guests’ dietary needs and might have to think on their toes if some of their equipment breaks along the way. Yet despite all these challenges, the rewards are great.

For Reuvers, working aboard Rovos Rail is the chance to travel to beautiful places in South Africa, as well as up to Victoria Falls, Tanzania and even across the continent to Angola.

“It feels good being able to make something happen in the middle of nowhere, especially when something has not gone according to plan,” she said.

Related stories
Chasing American Airlines elite status? Here are 14 ways to earn Loyalty Points
Fly to Greece from multiple US cities for less than $700
American Airlines restores free 24-hour hold option
Holiday airfare is rising: What to know if you haven’t booked yet
Featured image by MATT HIND/BELMOND
Editorial disclaimer: Opinions expressed here are the author’s alone, not those of any bank, credit card issuer, airline or hotel chain, and have not been reviewed, approved or otherwise endorsed by any of these entities.