Articles
Ethan Steinberg has been a frequent flier for as long as he can remember. He went from studying abroad in Paris to moving to Shanghai after graduating college, where he covered all things travel in the Asia-Pacific region for TPG.
March 13, 2019
•
13 min read 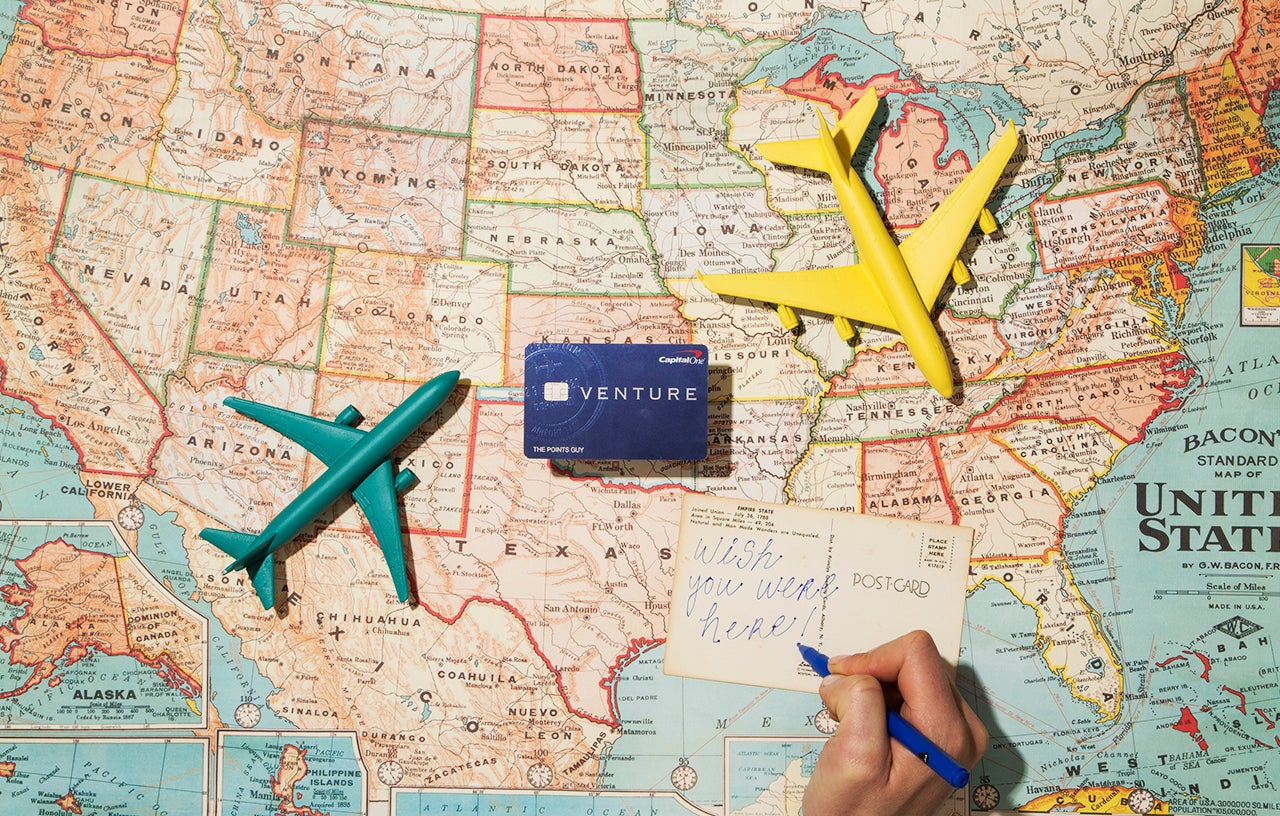 Every time an airline devalues its award chart, increases taxes on award tickets or adds some other restriction on how and when you can redeem your points or miles, fixed value credit cards start to look a little more attractive by comparison. Among this group, the Capital One Venture Rewards Credit Card has made a name for itself by offering a consistent 2x miles (2% return) on spend in the form of statement credits against travel purchases.

However, in November 2018, the card significantly upped its game, offering a limited-time sign-up bonus to welcome the addition of airline transfer partners. In addition to the fixed-value redemption noted above, you can now transfer your miles to the following partners, all at a rate of 2 Capital One miles to 1.5 airline miles (except where otherwise noted):

To make this even better, the majority of these transfers process instantly, ensuring you can immediately put them to use rather than waiting for them to arrive.

So what does this mean? Since the card offers 2x miles on all purchases, you're essentially earning 1.5 airline miles for every dollar you spend on the card, which is a terrific earning rate and can result in some fantastic values.

If you opened this card during the limited-time offer in the fall, you may be sitting on 75,000+ Capital One miles (note that the current offer for new cardholders is 50,000 miles after you spend $3,000 in the first three months). While the 75,000-mile balance is worth a minimum of $750 if redeemed to erase travel charges, TPG's most recent valuations peg it at $1,050 thanks to the new flexibility of transfer partners, and it could be worth even more if transferred to the right airline.

75,000 Venture miles will transfer to just about 56,000 airline miles, but if you factor in the minimum spending from the fall's offer, you actually took home at least 85,000 Venture miles. This translates to roughly 64,000 airline miles for most of the above partners. While some of them (like Aeroplan and Flying Blue) are shared with other transferable points currencies, certain carriers (like Finnair) are entirely new.

Now that most new cardholders have had a few months to earn the bonus, let's refresh your memory and take a look at some of the most valuable ways to use 75,000 Capital One Venture miles.

While major airline alliances make it easy to travel to distant parts of the world, the non-alliance airlines actually have a unique ability to create custom-built (and valuable) loyalty programs. We see this happening with programs like Alaska Airlines Mileage Plan, whose miles TPG considers to be the most valuable airline currency, and with programs like Etihad Guest, which has long been a TPG favorite.

There's a lot to love about this program, including unique partner redemptions like Royal Air Maroc and a recently improved booking process, but the real highlight is the ability to book awards for AA operated flights at pre-devAAluation prices. Here's a look at Etihad's award chart for American flights:

With about 64,000 Etihad Guest miles at your disposal, you could book an award on the last US carrier to operate a true first class cabin (AA's 777-300ER). You could fly from New York-JFK to London-Heathrow (LHR) or from Miami (MIA) to Sao Paulo (GRU) for 62,500 Etihad Guest miles.

When TPG flew AA's 777 first class from Los Angeles (LAX) to Hong Kong (HKG), he said that the product didn't really stand above the carrier's business class. As a result, you might be better off using your Venture sign-up bonus to book an American business class award. When transferring your miles to Etihad Guest, you'll have enough for a one-way flight to almost any location in the world from the US, including the following:

You could also book two round-trip domestic economy tickets on American for 12,500 Etihad miles each way or a round-trip economy ticket to Europe, South America or parts of Asia. In any of those cases, you'll still have miles left over to jumpstart your next vacation.

Of course, there are rumors swirling that Etihad will be joining Star Alliance, but nothing has been confirmed. If you're considering this redemption option, I'd recommend booking sooner rather than later in case the rumors do turn out to be true.

In addition to being the newest (surprise) addition to the Amex Membership Rewards transfer options, Avianca LifeMiles offers one of the most overlooked and underrated loyalty programs, especially for booking Star Alliance awards. You can check out this guide for full details on the program, but the important thing to remember is that Avianca does not pass on fuel surcharges for partner awards.

This is especially useful for booking Lufthansa premium cabin awards at a reasonable value. If you book with United, the mileage cost is sky high, and if you book with Aeroplan, you can expect to pay $500+ in taxes and fees. For a one-way business class ticket from the US to Europe, Avianca charges 63,000 miles and just $30 in taxes.

You can also select a combination of miles and money to potentially book this same ticket for only 26,000 miles and $581.

LifeMiles also routinely sells miles at very attractive prices, and if you top up your account to 87,000 miles, you can book a coveted Lufthansa first class award seat. Note that LifeMiles sometimes has trouble displaying Lufthansa award space, and you'll typically only be able to book premium cabin awards within 15 days of departure, similar to other Star Alliance partners.

There are a few other attractively priced redemptions in the Life Miles award chart worth mentioning, including:

Because Cathay Pacific uses a distance-based award chart for flights on its own metal, and because Hong Kong is incredibly far away from the US, the 64,000 miles you'll end up with from the Venture Card's sign-up bonus are going to leave you just a tad short of some of the best redemptions.

One great option would be to book a premium economy seat on Cathay's newest long-haul flight from Hong Kong to Washington-Dulles (IAD) for only 60,000 miles one-way. If you're looking for a fully flat seat on one of these 12+ hour flights and can pick up an extra 1,000 Asia Miles in some other way, 65,000 miles would be enough for you sit in business class on flights between Hong Kong and Los Angeles or San Francisco.

You can also find solid values using Asia Miles for partner awards, including American Airlines. A round-trip transcontinental business class ticket on AA's specially configured A321T would cost you 60,000 miles, while a one-way business class award to Europe would cost 50,000.

Just note that booking through Asia Miles is a bit challenging, as award tickets on only a few carriers can be booked online using the carrier's not-always-intuitive award interface.

Air Canada's independently run loyalty program Aeroplan offers some great values in its award chart, though your Venture sign-up bonus may not be enough to unlock most of them. You can always transfer points from Amex Membership Rewards (at a 1:1 ratio) to top up your account, and Amex has run transfer bonuses in the past.

You can use your Aeroplan points to book a round trip economy ticket to "Europe 1" for 60,000 miles or a one-way business class award to anywhere in Europe for 55,000 to 57,500 miles (depending on your final destination).

You could also book an economy ticket to any city in the world, with even the most distant parts of Australia, South Africa, and India costing 50,000 miles or less for a one way award. Just be careful, as Aeroplan passes on expensive fuel surcharges for some partner airlines.

Despite its financial troubles, Alitalia offers one sweet spot redemption that fits perfectly with the Venture bonus. SkyTeam partner awards are expensive to begin with (and require round-trip booking through the carrier's MilleMiglia program), but one-way awards between the US and Italy on Alitalia metal are reasonably priced. This one-way ticket from New York-JFK to Milan (MXP) will only set you back 48,000 miles and about $150 in taxes and fees:

Booking round-trip is an even better option, requiring just 80,000 miles. However, starting July 1, 2019, this award will jump to 70,000 miles each way, so you have just a few months left to utilize this sweet spot.

Flying Blue's switch from a fixed award chart to "variable and dynamic pricing" really gutted a lot of the program's value and created some illogical award tickets. It's now impossible to talk confidently about the cost of any given award, and we're instead forced to rely on screenshots and the program's calculator to explain the confusing pricing scheme. The ~64,000 miles earned from your Venture bonus should be enough for a round-trip economy award from the US to Europe or a one-way premium economy ticket:

But, then again, this haul might just get you a one-way economy flight:

However, you may find some value in the carrier's rotating promo awards. In the current iteration, round-trip economy award flights from Seattle (SEA) to multiple cities in Europe start at just 21,600 miles, an absolute steal for crossing the Atlantic (though still subject to a couple hundred dollars in taxes and fees).

Generally speaking, the best value in a distance-based award chart is for short- to medium-haul flights. Given this trend, the fact that Qantas uses such a chart for flights between the US and Australia renders the Qantas club relatively useless for Americans. However, one possible route worth noting is nonstop economy awards between the US and Australia. Qantas currently flies nonstop from Sydney to Dallas (DFW), Los Angeles and San Francisco. The nonstop flight to Dallas, clocking in at just over 15 hours, can be booked for 55,000 miles one-way in economy. "Shorter" flights to and from the west coast are only 45,000 miles each way in economy.

The Capital One Venture Rewards Credit Card was an attractive product when it was only good for fixed value redemptions. Now that the program has been expanded to include transfer partners, there are even more great ways to redeem your points. Even after factoring in the 2:1.5 transfer ratio for most partners, new cardholder's from last fall's limited-time offer should have enough miles to get to Europe or Asia, possibly even in a fancy business class seat.