Articles
Gwen Pratesi is a Florida-based freelance travel writer and a James Beard Award Finalist in Journalism. She contributes to The Points Guy and many other outlets while traveling the world and cruising the high seas.
Follow
June 25, 2022
•
8 min read 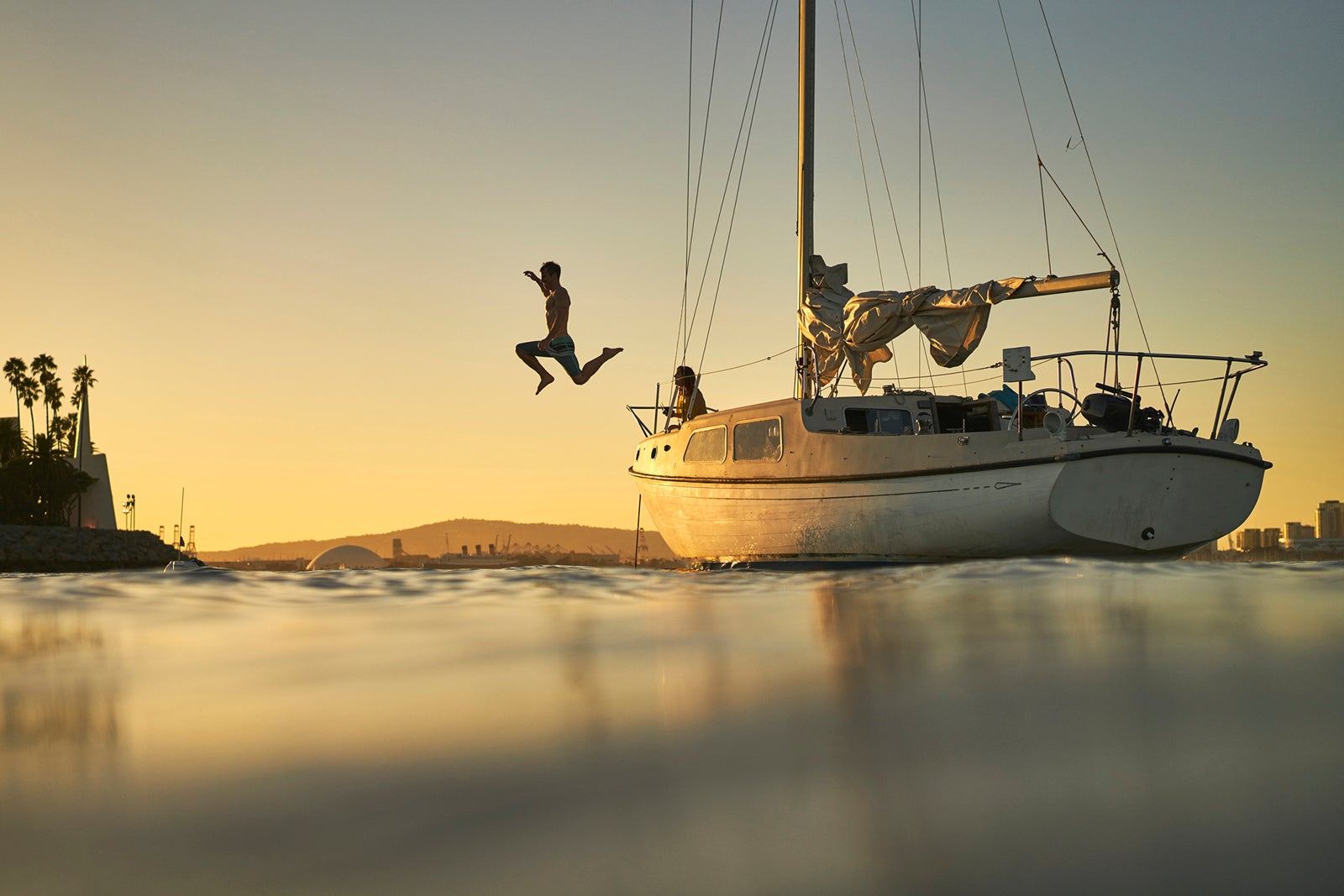 Before you hop on a flight and book a land package for your next vacation, consider instead what you might be able to see from the water on a ship. Traveling the world's vast oceans and waterways offers unrivaled views of some of the most magical destinations around the globe.

While you can reach most of these locales by plane, you may decide that the best way to see them is from a panoramic viewpoint at the bow of a ship. From remote vistas at the bottom of the world to stunning coastal scenes in southern Europe, these seven destinations will transport you to some of the most scenic places to see by water.

Located in Alaska's Inside Passage, Glacier Bay National Park and Preserve is a bucket list destination best viewed from its icy glacier waters. Much of the vast interior of the park's 3.3 million acres is composed of water and mountains covered in dense rainforest — and most of it is not accessible by road or hiking paths — so the ideal way to see the park is from a cruise or expedition ship or tour vessel.

Even large cruise ships spend a day traversing these pristine waters where you'll watch — and hear — ice calving from the brilliant blue glaciers. Grab your binoculars and you might be able to see bald eagles flying overhead or catch a glimpse of brown bears and mountain goats along the shoreline.

Glacier Bay is also a humpback whale sanctuary, so keep a lookout for these majestic, endangered animals — some as large as 50 feet in length and weighing up to 40 tons. Park rangers board each ship to provide commentary throughout the day and assist with wildlife sightings for whales, harbor seals, sea otters, sea lions and various species of shorebirds.

The coastal ports along the French Riviera offer some of the most dramatic and enchanting scenery in the world. There's nothing like sailing into Monaco and seeing Monaco-Ville, the Old Town, perched atop a 203-foot-high headland and the Oceanographic Museum rising out of the cliffside.

Known for its "lifestyles of the rich and famous," Monaco boasts yacht-filled marinas, palatial resorts and homes, winding roadways and hairpin turns that are home to the Monaco Grand Prix — all surrounded by the rugged cliffs of the Alps. While the glamorous scenery is beautiful by day, you won’t want to miss the view of this destination when it’s lit up at night.

Hawaii’s Napali Coast spans 17 miles on Kauai’s North Shore along the Pacific Ocean. The landscape looks much as it has for centuries with its pristine, remote beaches, jagged peaks, imposing cliffs as high as 4,000 feet, and waterfalls cascading into lush green valleys that end at the sea.

While there is an 11-mile hiking trail in Napali Coast State Park — the Kalalau Trail — that’s reachable via Haena State Park, the optimal way to view the majestic scenery is from the sea or by air. Your cruise ship may plan a cruise-by of the spectacular coastline, but to explore the marine life and sea caves along the coast, take a snorkeling tour to Nualolo Reef. Here you’ll have incredible views below the water and from the boat with a backdrop of the emerald green mountains and waterfalls.

If you're cruising to Istanbul, you'll arrive by one of the world's most famous waterways, the 37-mile-long Dardanelles. This narrow strait separates the continents of Europe and Asia and is the only waterway between the Aegean and Marmara seas. During Classical times, the Dardenelles was known as Hellespont and the ancient city of Troy was situated along the Asian shoreline.

Today, you’ll pass hillsides, fields with olive groves and castles and strategic fortifications like the Kilitbahir Fortress as you sail. Once you reach the Bosphorus, the Golden Horn and Istanbul, the seven hills of the ancient city and the minarets of the magnificent Suleymanlye Mosque come into view. You might even hear a call to prayer in the background.

Coastal Norway is home to more than a thousand fjords boasting astounding natural beauty, with calm blue waters from the sea contrasted with jagged towering cliffs. It's hard to imagine that these rocky perches were once home to farmers — and still are in some places — as you sail from one fjord to another, admiring one of Norway's best-known attractions.

One of the most iconic fjords is the UNESCO-protected site of Geirangerfjord. Created by glaciers that carved out the fjords and mountain summits, Geirangerfjord has seven waterfalls, including the best-known Seven Sisters and Bridal Veil falls. For a closer look from the water's surface, plan to take a kayak, or go on a fishing or RIB Boat tour.

If you're dreaming of magical sun-filled days in a tropical island paradise in the far corner of the world, consider an island-hopping adventure in the South Pacific. While all the islands of French Polynesia boast glistening turquoise waters, pristine white sand beaches, lush green vegetation and vibrant flora, Moorea and Bora Bora top the list for their striking looks when seen from offshore.

The scenery is magical, with mountain peaks rising from the sea, palm trees swaying in the breeze and overwater bungalows situated along the coast atop crystal clear aquamarine lagoons. Below the water’s surface, the views are equally as mesmerizing, with abundant marine life such as hawksbill turtles, colorful tropical fish, several species of dolphins, manta rays, blacktip reef and hammerhead sharks and humpback whales. To explore this fascinating underwater world, plan to go snorkeling or diving around the islands, especially close to the intricate coral reefs, which are teeming with fish and other sea life.

The Emerald City is one of the top places in the world to see from the sea, especially when arriving in Sydney Harbour at night. This bustling metropolis with its sunlit skyscrapers by day is known for its spectacular harbor views after dark due to the illumination of the world-renowned Sydney Opera House and Sydney Harbour Bridge. These iconic images of one of Australia’s largest cities in the Land Down Under are some of the most memorable views you’ll ever have from the water.

The journey to the bottom of the Earth is a trip of a lifetime for most travelers. Known as the Last Continent, Antarctica's otherworldly icy formations and rugged snow-covered landscape are best viewed via state-of-the-art expedition vessels that can navigate their way around by crunching through icy impasses.

Norwegian explorer Roald Amundsen, the first person to reac‎h the South Pole in 1911, described it this way, "Glittering white, shining blue, raven black … the land looks like a fairytale. Pinnacle after pinnacle, peak after peak -- crevassed, wild as any land on our globe, it lies, unseen and untrodden. It is a wonderful feeling to travel along it."

After a long journey to explore this unique wilderness ecosystem, adventurous travelers will be rewarded with unforgettable vistas of majestic mountains and icebergs, breaching whales and colonies of several species of penguins. While the scenery is breathtaking from the ship, part of the thrill of traveling to Antarctica is to see the ice floes and waterfalls up-close from a kayak or Zodiac. While you’re out on the water, it’s easy to be overcome with the vastness, ethereal beauty and extraordinary silence of this faraway place.