Why American Airlines Has a Competitive Edge for Business Travelers

Articles
Ethan Steinberg has been a frequent flier for as long as he can remember. He went from studying abroad in Paris to moving to Shanghai after graduating college, where he covered all things travel in the Asia-Pacific region for TPG.
Nov. 01, 2018
•
11 min read 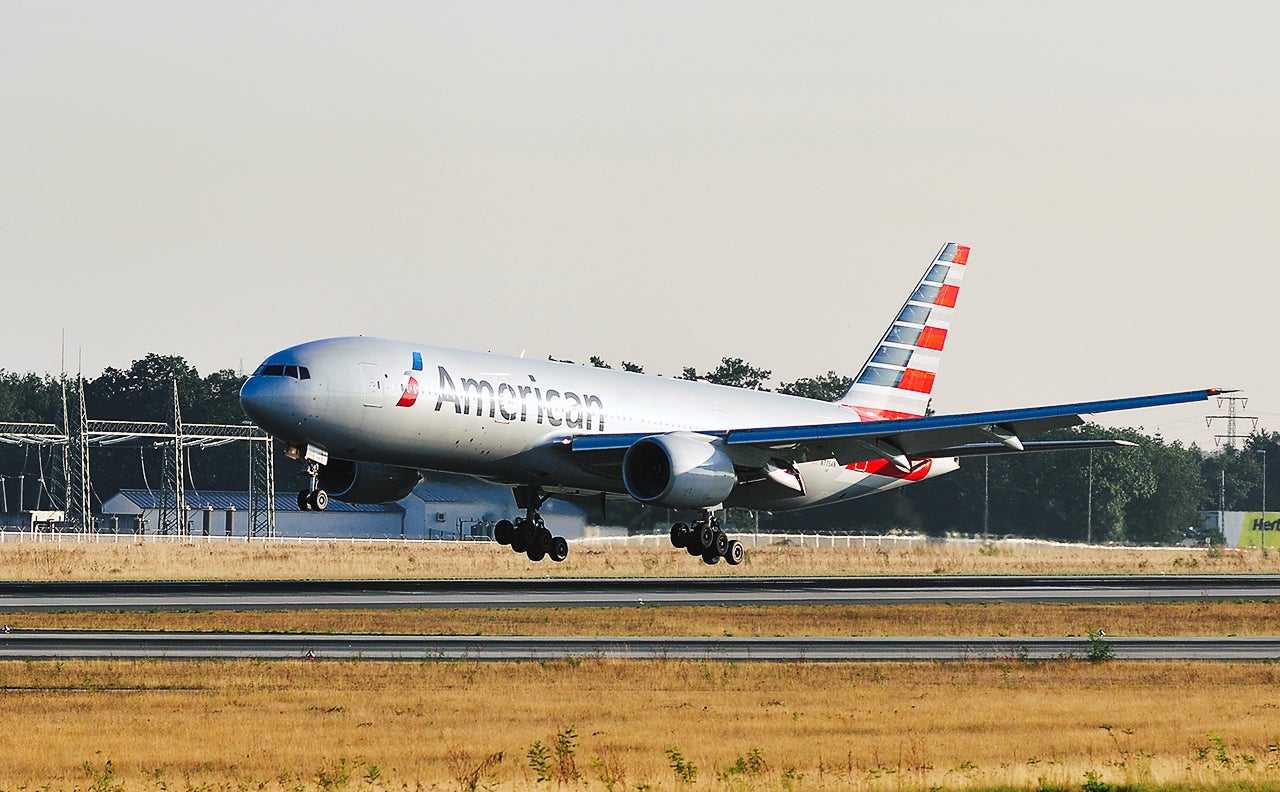 For most travelers living near a major airport, the three US legacy carriers are functionally interchangeable. Sure, you can pick out small difference here and there in terms of loyalty programs (Delta's variable pricing can be outrageously expensive), fleets (American's next generation 737 MAX somehow makes the flying experience worse), and even the premium cabin experience (I could write an entire book over the embarassing 2-4-2 seats that United sells as "Polaris" on 10+ hour flights, but at least that's being phased out). However, American, Delta and United are more similar than they are different.

All of this complicates the important decision every traveler has to make: which airline will get your loyalty and business?

Of course, this is a personal decision that everyone will approach differently. If you're incredibly sensitive to things like price or convenience, you may even choose to eschew loyalty in favor of the cheapest and most convenient flight when you go to book. But if you're a business owner or business traveler still struggling to decide which airline to make your "home" carrier, there's a very compelling reason for you to choose American Airlines, all else being equal.

All three carriers offer some type of business rewards program (Delta has SkyBonus and United has PerksPlus), but if you're not spending hundreds of thousands of dollars a year on travel, the easiest program to extract value from is American Airlines' Business Extra. SkyBonus and PerksPlus center on rewarding expensive, premium cabin fares purchased at the last-minute and require thresholds to even participate (including at least 5 unique employee travelers), while Business Extra is equally rewarding for all eligible flights and imposes minimal requirements to join the program.

You can check out this guide for a full walk-through of earning and burning with Business Extra, but here are the most important details to know:

So how big of an edge does AA give business travelers? In order to answer that question, we'll take a look at the spending thresholds required to achieve each of the four tiers of elite status with a major US airline and see how much value Business Extra would add.

Whether it's AAdvantage Gold with American, Silver Medallion with Delta or Premier Silver with United, you'll need to reach at least $3,000 in eligible spending (plus fly 25,000 miles or 30 segments) in a year to unlock this entry-level tier of elite status. When TPG Editor Nick Ewen did his annual valuations of airline elite status, he valued this lowest level almost equally across all three programs: $970 with American, $900 with Delta and $985 with United.

$3,000 in spending on flights would earn you 600 Business Extra points per year, which is enough to access some lower-level redemptions like two Admirals Club day passes (worth $59 each based on retail price). However, if you managed to earn just 50 additional points, you could earn a one-segment domestic upgrade certificate. Earning 650 points instead of 600 would require spending an extra $250 on revenue flights a year, which is a pretty safe assumption as most people who qualify for status don't hit exactly $3,000 EQDs and then stop.

This upgrade certificate (award code "BXP1") has a few restrictions, but it's nevertheless one of the most valuable awards available. It can't be used on fare codes beginning with B, N, O, Q or S (basic economy or deep-discount economy fares) and is subject to upgrade availability. That being said, it can be used on short-haul flights around the US or on American's premium transcontinental service between New York-JFK and Los Angeles (LAX) or San Francisco (SFO).

Obviously if you're not flying across the country, the cash value of the upgrade won't be as steep, but you also will have an easier time finding upgrade inventory (pro tip: use ExpertFlyer to search for "C" class upgrade space).

Business Extra Added Value: Depending on how you redeem your points, $3,000 in annual airfare spending can get you an extra $200 - $500 or more thanks to Business Extra, adding at least 20% in value to your AA gold status.

This level of spending is irrelevant for Delta's SkyBonus and United's PerksPlus program, since both require higher amounts of airfare purchases.

$6,000 in annual airfare spending with American will earn you 1,200 Business Extra points, opening up a whole host of new redemption options. If you buy a full-fare ticket (beginning with fare code Y or J), 1,200 Business Extra points will earn you one international upgrade certificate. Business Extra doesn't differentiate between international destinations, so an upgrade between Shanghai (PVG) and Los Angeles (LAX) will cost the same number of points as one between New York (JFK) and London (LHR). Note that upgrade certificates are only valid for flights on AA metal, not Oneworld partners. However, they can be confirmed at the time of booking (subject to availability), taking some of the guess work out of long-haul travel.

If you're able to earn 1,300 points a year (spending $6,500 instead of $6,000), you could also cash them out for two domestic upgrade certificates and potentially surprise your traveling companion with a little extra leg room.

Business Extra Added Value: Given the price discrepancy between international economy and business class tickets, I'll peg one international or two domestic upgrades at about $750. That would be almost a 35% boost over the value of AA Platinum status (the second tier), which Nick values at $2,185.

This level of spending with Delta would at least open your company up to the SkyBonus program, though you also must have at least five unique employee travelers per year to qualify. If you can participate, this level of spending would result in earning at least 6,000 points though could climb as high as 180,000 points if you're purchasing premium or full-fare tickets to certain destinations. However, there's nothing you can get for 6,000 SkyBonus points; the cheapest redemption option is ten beverage/headset coupons for 10,000 points. No thanks.

United's PerksPlus requires $25,000 in purchases on qualifying flights each year to renew your membership for customers in the US and Canada, so this level of spending still isn't enough to participate on a yearly basis.

The third tier of elite status in all three carriers' loyalty programs requires $9,000 in annual spending. At that rate, you'd walk away with 1,800 Business Extra points. In addition to lounge passes and upgrade certificates, you could now also consider redeeming your points for free flights. A one-way shuttle flight between Boston (BOS), Washington-Reagan (DCA) and New York-LaGuardia (LGA) costs 1,400 points for an economy saver award. If you spend $10,000 a year on flights and manage to earn 2,000 Business Extra points, you could redeem for any domestic economy award on AA, including transcontinental flights.

You could also mix and match these 1,800 points into a combination of one international and (almost) one domestic upgrade certificate or just shy or three domestic upgrades. As is the case with any loyalty program, the more points you have, the more flexibility you have, and you'll be able to pick and choose more valuable redemption options.

Business Extra Added Value: It shouldn't be hard to get $1,000 of value out of several upgrade certificates or an urgent last-minute flight award, which would give you a huge bump over the ~$3,100 value of AA Platinum Pro status.

This level of spending is still not enough for participation in United's PerksPlus, and your minimum earnings in the Delta SkyBonus program still won't get you anything.

Although Delta requires $15,000 qualifying dollars to earn its top tier Diamond status, United and American each require $12,000 for their respective top tiers. This works out to 2,400 Business Extra points a year, on top of the four Systemwide Upgrades (SWUs) that AAdvantage Executive Platinum elites already earn. This is enough for free flight awards within the domestic United States or to the Caribbean, potentially still with some points left over. Or, you could redeem for two international full-fare upgrades or almost four domestic upgrades.

If you're one of American's top tier elites, odds are you have points rolling over from year to year. If you hit the 3,000-point mark ($15,000 in airfare spending), you could redeem for flights to Hawaii or parts of Central and South America. At 3,100 points you can redeem for a discounted fare international upgrade award (with the same B, N, O, Q or S fare class exclusion), essentially giving you a fifth SWU to use during the year. 3,200 points is enough to gift AAdvantage Gold status to a friend or family member (or yourself), although that's a relatively poor redemption value.

I should note that some perks like domestic upgrade certificates might be redundant to an Executive Platinum elite who already receives complimentary space-available upgrades on all domestic American flights. However, not everyone who spends this much will qualify for top-tier status. Maybe you booked a few very expensive tickets but came up short on the flying requirements, or maybe you are an Executive Platinum member who wants to gift upgrades to friends or family. In either case, the Business Extra points give you some valuable reward choices.

Business Extra Added Value: With so many options from which to pick, you can really redeem your points for the awards that are most valuable to you. Multiple upgrade certificates or free flights to Hawaii or the Caribbean are easily worth $1,500 or more, vs. the ~$7,500 value of AA Executive Platinum status.

This is still below the level of spending to participate with United PerksPlus, and 12,000 Delta SkyBonus points won't go very far in comparison.

If you or your company is eligible to sign up for American's Business Extra program, it's an absolute no-brainer. Not only is the program free; the rewards you earn are in addition to the miles you receive through the AAdvantage program. Even at the lower spending levels you can still get some nice perks out of the program, but for upper-level elites, the value is significantly higher. Keep your eyes peeled as well, because Business Extra routinely runs 500-point promos (for anything from taking a five-minute survey to taking a single flight) that can help push you up to the next redemption threshold.