5 East Coast weekend getaways you can take on the Acela 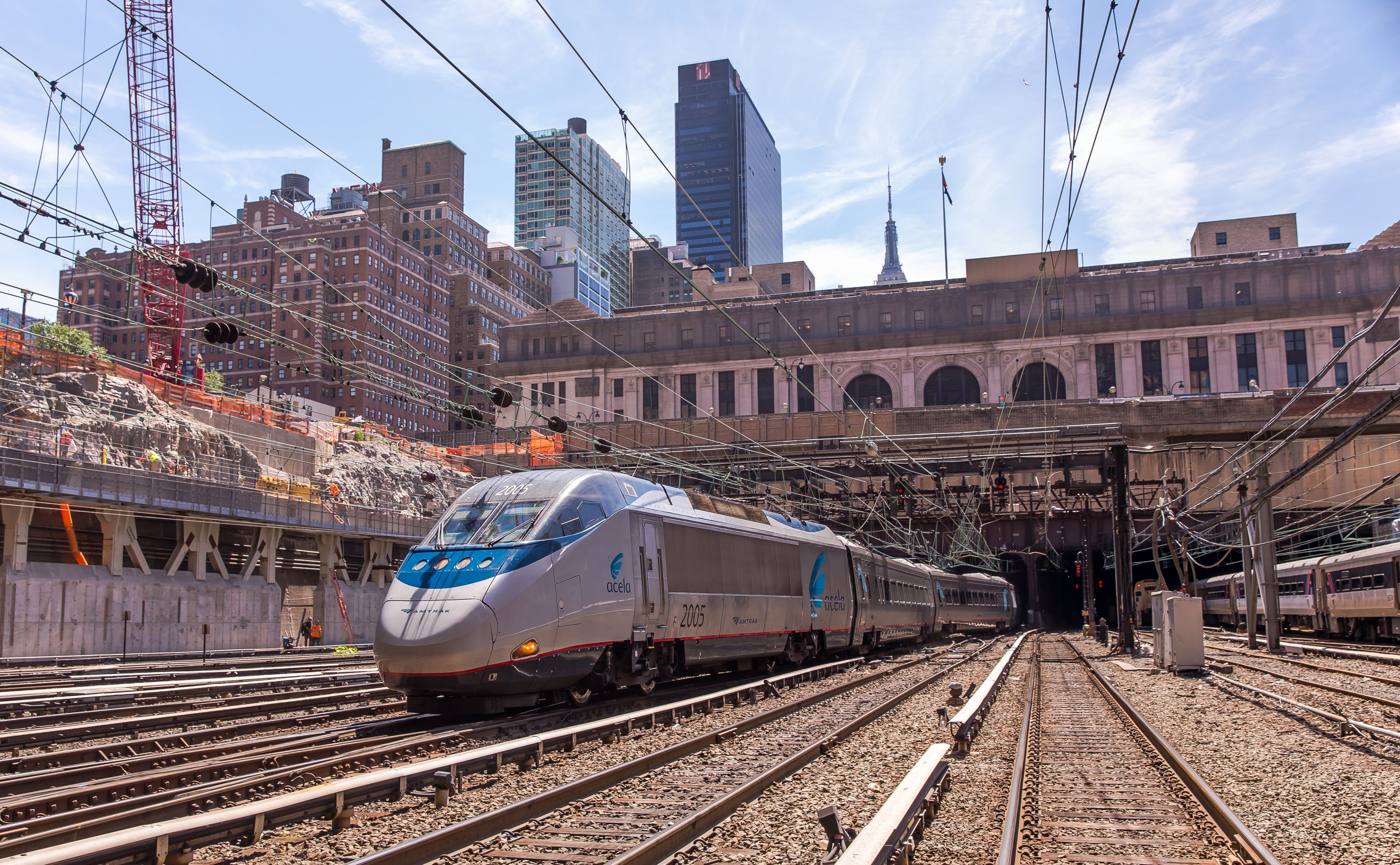 All aboard! For the entire month of September at The Points Guy, we'll be exploring the world of train travel with reviews, features, deals and tips for maximizing your trip by rail.

As much as we love planes, sometimes the train simply makes more sense. The stations are usually located right in the city center, there’s no TSA officer hassling you to remove your laptop and take off your shoes and you can arrive about 20 minutes before your scheduled departure time.

Though our railway system in the U.S. doesn’t hold a candle to that of, say, Switzerland and many other European countries, Amtrak is great for short trips (short being the key word here). And if you live in the Northeast corridor, it’s especially convenient. Take the Acela, for example, which starts in Boston and ends in Washington, D.C., stopping along the way in New Haven, Connecticut; New York City; Philadelphia; and Baltimore, Maryland. If you’re based in any of those cities and want to plan a weekend getaway to one of the destinations on the Acela, here are our tips for where to stay, where to eat and what to do.'

Disembark at South Station in Beantown, which has historic charm in spades — just spend an afternoon wandering around Beacon Hill and the Public Gardens before settling into a wooden booth at the Union Oyster House and you'll see what we mean. History buffs can visit the Old North Church and see Paul Revere’s house, follow the Freedom Trail and watch a game at Fenway Park, the oldest baseball stadium in the nation. Art lovers should see what’s on at the MFA and the ICA, though we're especially partial to the Isabella Stewart Gardner Museum. An avid collector of European Renaissance art, Gardner built herself a Venetian-inspired palazzo in Back Bay.

While in Boston, you’d be remiss not to chow down on some New England clam chowder, though the city has a dynamic — and international — restaurant scene, too. We recommend Tatte’s Bakery for a quick lunch, Eastern Standard for bistro classics and Yvonne’s for cocktails.

Best of all, there are plenty of points hotels in Boston to choose from. Among the best are the Category 6 Envoy Hotel, a member of Marriott’s Autograph Collection on the Seaport (standard redemptions from 50,000 points a night) and the Ritz Carlton Boston, which is right off the Commons, and the Liberty, a Luxury Collection Hotel in the former Charles Street Jail. The latter are both Category 7 properties with standard redemptions from 60,000 points a night.

Take it from us — when planning a weekend getaway in the City that Never Sleeps, it’s best to pick a few highlights or plan your trip around a few neighborhoods. For a quintessential New York day, you could have brunch at Tavern on the Green, visit the Met or the Guggenheim and rent a rowboat in Central Park; head Downtown for dinner at one of the city’s new hotspots like Feroce Ristorante, Wayan or the Poni Room; and end the night with cocktails at a speakeasy like Attaboy or Employees Only.

Then again, you could spend a whole weekend just eating your way through Brooklyn and exploring the borough’s waterfront, parks, shops and other attractions.

There are plenty of hotels where you can get great value for your loyalty points not too far from New York-Penn Station. You can earn and redeem Marriott Bonvoy points at Moxy hotels (we’re partial to the new Moxy Chelsea) and Edition Hotels, including the new Times Square Edition. If you’ve got points to burn, head farther uptown and do it at the St. Regis — the classic grand dame has one of the best hotel bars in the city: the classy King Cole Bar, which claims to be the birthplace of the Bloody Mary.

There are also great hotels for those with World of Hyatt Points, like the Park Hyatt New York and the Andaz 5th Avenue, and you can use IHG points at the Kimpton Hotel Eventi, which is just a 5-minute walk from Penn Station.

The City of Brotherly Love is perfect for a weekend getaway — it’s got plenty to do but isn’t so huge it feels overwhelming. Aside from the main sights such as the Liberty Bell and the Philadelphia Museum of Art, we love smaller scale attractions like the Barnes Museum, the Rodin Museum and the Magic Gardens.

Go ahead and try a Philly cheesesteak if you must, but then explore the food scene further. You’ll have to book in advance if you want a table at Zahav, which recently won a James Beard Award, but you can also try chef Michael Solomonov’s famous hummus at his fast-casual spot, Dizengoff. Another favorite: Wm Mulherin’s Sons in Fishtown. It’s a toss-up whether their dinner or brunch is better, but let us leave you with two words: brunch pizza.

The most luxurious new place to stay is the Four Seasons Philadelphia at Comcast Center, which just opened this summer. Marriott recently welcomed the Notary Hotel as a member of their Autograph Collection, and you can score standard redemptions from just 35,000 points per night. Marriott loyalists should also consider the Ritz Carlton Philadelphia and the Aloft Philadelphia Downtown, both of which are across the Schuylkill River from 30th Street Station, where you'll catch the Acela.

If you haven't been to Baltimore recently, it's time to give Charm City a chance. Though it often gets skipped over in favor of D.C., it's got a quirky appeal all its own and is easily accessible by the Acela at Baltimore-Penn Station. After all, it's the hometown of John Waters, who brought us "Hairspray" and other campy cult films.

Starting this fall, the Baltimore Museum of Art is dedicating a year's worth of programming to female-identifying artists, beginning with an exhibit on American Women Modernists. You could go there and then spend an afternoon browsing the vintage shops and other indie boutiques in the offbeat neighborhood of Hampden.

When in Baltimore, you'd better get your fill of Maryland crabs — the best on the East Coast. We recommend the crab cakes at Gertrude's Chesapeake Kitchen at the BMA. Woodbury Kitchen — run by award-winning chef Spike Gjerde — is a must-visit for Mid-Atlantic cuisine in a cozy space.

Marriott and other major hotel brands offer plenty of points hotels in the city, but we love the city's boutique hotels, including the Ivy Hotel, a Relais & Châteaux property in a historic mansion; the Sagamore Pendry Baltimore in Fell's Point; and the Hotel Revival, which has a cool rooftop bar. If you decide to book one of these, be sure to pay for your reservation with a credit card that will maximize your stay, like the Chase Sapphire Reserve, which offers 3x on travel. You can even reserve the Ivy through the American Express Fine Hotels & Resorts (FHR) program if you have The Platinum Card® from American Express. In addition to earning 5x points on prepaid bookings, you'll get a complimentary upgrade on arrival, when available; daily breakfast for two; guaranteed late check out and a $100 spa credit to use during your stay.

Board the Acela to Union Station, in the nation's capital, for a weekend full of culture and history. All the Smithsonian's museums are free to enter, the restaurant scene is hotter than ever and the hotels just keep getting better and better. You'll find plenty of things to do this fall and year-round, too.

Coincidence or not, some of the city's best new restaurants are in the best new hotels. Take American Son, for example. Rising chef Tim Ma is serving deliciously creative dishes inspired by his Asian-American upbringing inside the Eaton DC. At A Rake's Progress inside the Line DC, award-winning chef Spike Gjerde serves seafood towers and other dishes that make the most of the region's bounty.

For travelers booking stays on points, consider the Conrad Washington DC, the JW Marriott — which is just a block from the White House — and the InterContinental Washington DC — the Wharf.

Related stories
New offer: Earn up to 80,000 AAdvantage miles with these Citi cards
Marriott starts its annual Week of Wonders promotion — here's what you need to know
SAS round-trip premium economy flights to Europe starting at $653
When does airline elite status expire?
Featured image by Courtesy of Amtrak /Chuck Gomez
Editorial disclaimer: Opinions expressed here are the author’s alone, not those of any bank, credit card issuer, airline or hotel chain, and have not been reviewed, approved or otherwise endorsed by any of these entities.

Our points-obsessed staff uses a plethora of credit cards on a daily basis. If anyone on our team wouldn’t recommend it to a friend or a family member, we wouldn’t recommend it on The Points Guy either. Our opinions are our own, and have not been reviewed, approved, or endorsed by our advertising partners.
See all best card offers
Related stories
News
New offer: Earn up to 80,000 AAdvantage miles with these Citi cards
News
Marriott starts its annual Week of Wonders promotion — here's what you need to know
Deals
SAS round-trip premium economy flights to Europe starting at $653
Guide
When does airline elite status expire?