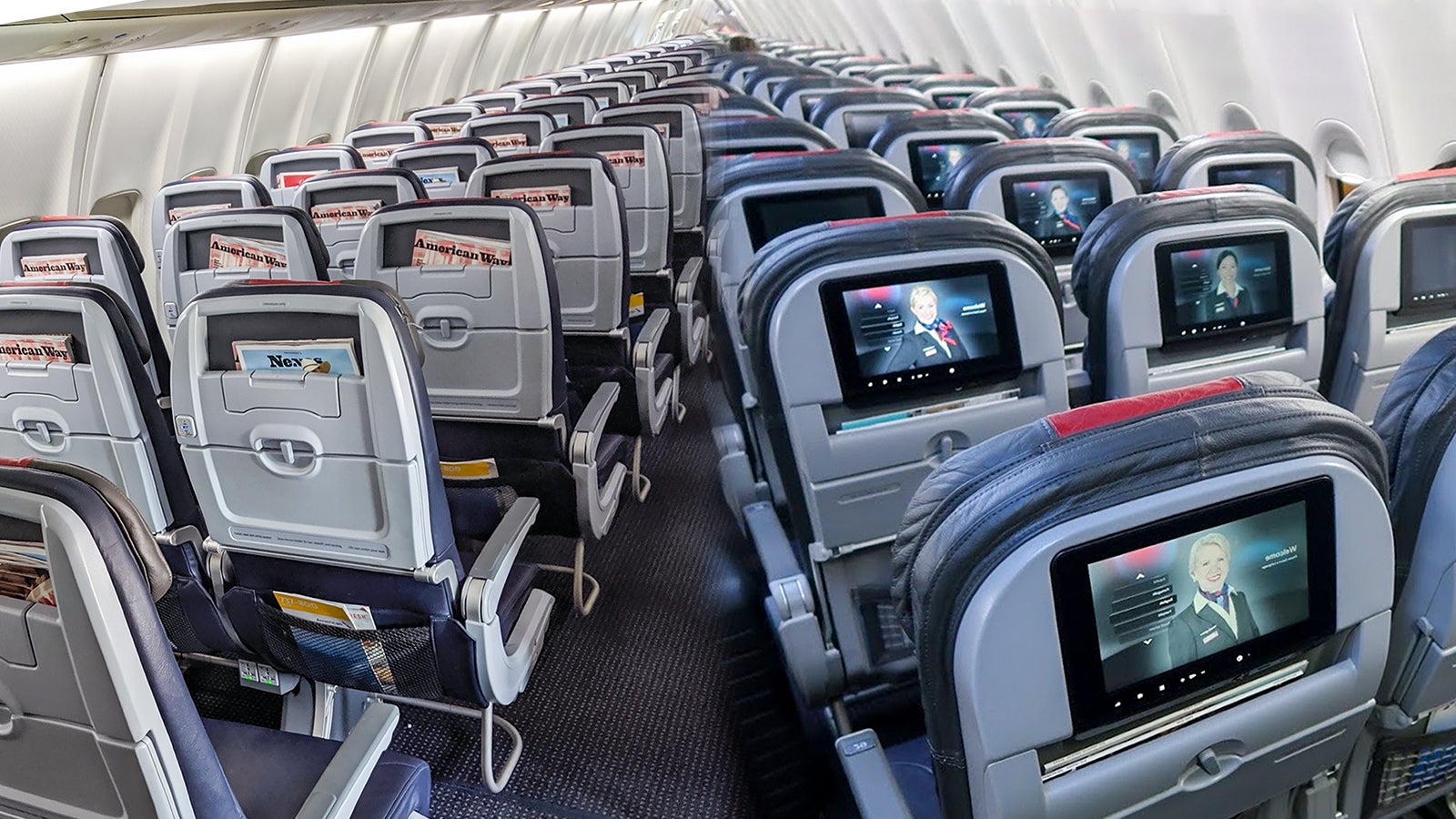 A tale of two very different American Airlines Boeing 737s
This post contains references to products from one or more of our advertisers. We may receive compensation when you click on links to those products. Terms apply to the offers listed on this page. For an explanation of our Advertising Policy, visit this page.

Many travelers don't pay much attention to the aircraft type when selecting a flight. After all, whether you're flying an Airbus A321 or a Boeing 737, it's understandable to assume that the onboard experience would be similar between the two on the same airline. At the very least, you might expect that the experience would be similar from one American Airlines 737 to another.

But that's not the case on American Airlines right now. The airline is working to retrofit the interiors of its domestic workhorses, the Boeing 737 and the Airbus A321. On the 737, AA is adding 12 more economy seats per aircraft, with "slimline" seats have thinner padding and installing bathrooms that are 7 inches smaller.

Once the project -- ironically named "Project Oasis" -- is complete, those cramped conditions will be found throughout the fleet. In the meantime, there are some drastic differences between American Airlines 737s.

I've recently flown both a Legacy American Airlines (LAA) and a Project Oasis Boeing 737. Here's how the Project Oasis planes are different:

One of the most drastic differences between the two aircraft was found in the bathroom. Airplane bathrooms aren't known to be spacious, particularly on domestic aircraft. But AA opted to install much, much smaller bathrooms as part of the Project Oasis makeover.

While the pre-retrofit aircraft have bathrooms that measure 31 inches from wall to wall, the new Project Oasis bathrooms have been shrunk to just 24 inches at their widest spot.

After the inaugural American Airlines 737 MAX flight, I wrote that it was perhaps the worst aspect of the plane. Shortly afterwards, AA flight attendants voiced their complaints about how small the bathrooms were. That didn't stop AA from installing the same bathrooms on the Boeing 737s as part of Project Oasis.

So, I decided to take a tape measure and see just how the two compare:

Interestingly, the minimum width of the two bathroom types measured identically. That was surprising considering I saw a passenger of size struggle to get out of the 737 MAX bathroom on the inaugural flight.

However, the main difference is definitely noticeable when it comes to the sink. The un-retrofit aircraft sinks are large enough to comfortably wash your hands.

However, the Oasis bathroom sink measures no more than 5.5 inches long. That can make even the smallest hands feel large. Although I didn't measure the depth, the Project Oasis sink is noticeably less deep.

Note that American Airlines didn't opt to install a smaller bathroom in first class. The only difference in the measurements that I found between the two configurations can be chalked up to rounding.

This is likely the first difference that passengers notice between the two aircraft types. While many Legacy American Airlines aircraft have crisp and bright inflight entertainment screens, the Project Oasis aircraft don't have any screens.

In case you're wondering: yes, that means that American Airlines is removing seats that already had relatively new screens and replacing them with newer seats that don't have a screen. This decision is hitting AA's financials too. AA had planned to use these screens for at least a few more years, but now it must accelerate writing off their cost.

On the Project Oasis aircraft, American Airlines encourages passengers to "Bring Your Own Device" and watch the movies and TV shows available for free through the Wi-Fi system. But, unless you travel with a tablet or want to watch on your laptop, you're going to be stuck watching the entertainment on your phone.

However, the good news is there are nearly identical entertainment options whether you're watching it on a seatback monitor or on your own device. In September, there are 175 movies on the built-in monitors and 173 movies available through the ViaSat system. Both also offer around 143 hours of TV programming.

In first class, there's supposed to be 37 inches of pitch, although I only measured 36 inches on my Project Oasis flights.

Despite this, American Airlines points out that there's more personal space and more legroom in this new interior than the old interior. And I was surprised to see a 6 foot, 4 inch man sit in AA's 30-inch pitch seats and not have his knees touch the back of the seat in front of him.

How's this possible? Part of it is accomplished through the shaping of the seat. But there's only so much that can be accomplished that way. The rest of that knee room is created by reducing the seat padding. On my Project Oasis flights, I measured just 2 inches of seatback padding in economy and 3 in first class.

That's a stark difference from the Legacy American Airlines 737 aircraft, where I found more than 3 inches in economy and a whopping 5.5 inches of seat back padding in first class.

One of the advertised benefits of Project Oasis was "larger overhead bins." While some of American Airlines' aircraft could really use some more overhead bin space, the legacy 737s weren't exactly lacking.

In my flights on both versions of AA's 737, I didn't notice -- or think to measure -- the overhead bins. But an AA spokesperson confirmed that the Project Oasis overhead bins are indeed bigger. The not-yet-retrofit 737s have "Boeing Sky Interior pivot bins" while the Project Oasis are retrofit with Boeing's new "Space Bins."

Those may sound similar, but there is a difference. Boeing advertises the Space Bins as holding six carry-on bags instead of the four that would fit in the previous Sky Interior pivot pins. That means 50% more bag capacity -- at least if everyone puts their bags in the right way.

Seat Width: The Boeing 737 isn't known for being spacious, and the Project Oasis retrofit isn't working any miracles to make it any bigger. That said, the Project Oasis armrests are much smaller -- giving you a little more hip space but not really serving much of a purposes as armrests.

How to know if you're booking a Project Oasis aircraft

After learning about the differences, you probably have a preference about which aircraft type you want to get. However, the two aircraft are nearly identical when booking flights, checking in for flights and viewing the flights in the AA app.

The aircraft type is listed as Boeing 737-800, abbreviated to 738 on the website. For example, here's a flight on a Legacy American Airlines 737 aircraft -- featuring in-flight entertainment screens and comfortable seats:

And here are two Boeing 737 flights with Project Oasis interiors.

Eagle-eyed readers may notice one difference: the Wi-Fi symbol on the Project Oasis aircraft has an indicator showing high-speed Wi-Fi where the LAA aircraft has a Wi-Fi symbol without the needle. As AA has now completed its satellite-based Wi-Fi retrofit and all 737 aircraft, all of the 737s should now have high-speed ViaSat connections. However, the two arrangements are currently showing different Wi-Fi indicators.

However, there's one reliable way to tell Project Oasis 737 from non-retrofit aircraft: the row numbers in first class. Project Oasis flights have rows 1-4 in first class where LAA aircraft are numbered 3-6. And, as you'll see below, the same flight can vary between the two arrangements from day to day:

Flying the two aircraft arrangements in close succession provided a poignant example of the direction American Airlines is going with its domestic fleet. American Airlines could have "harmonized" its Boeing 737 aircraft at 160 seats and provided industry-average pitch, inflight entertainment screens at every seat, humane-sized bathrooms, large overhead bins, comfortable seats and satellite-based Wi-Fi.

Instead, American Airlines is removing seats with inflight entertainment screens and fairly-new bathrooms from its fairly-new Boeing 737 aircraft and installing 12 more economy seats with less pitch, no IFE screens and smaller bathrooms. I'm sure that this decision looks great in the financial spreadsheets that management used to plan this retrofit, but it's not great for the passenger experience.