Beyond Paris: Choose from these 10 beautiful French islands for your next holiday

Articles
Lori Zaino is a writer for TPG and TPG UK covering travel, news, points and miles and more. She's been based in Madrid, Spain almost 15 years and is an expert in travel throughout destinations such as Europe, Southeast Asia and Africa.
Follow
Feb. 16, 2020
•
11 min read 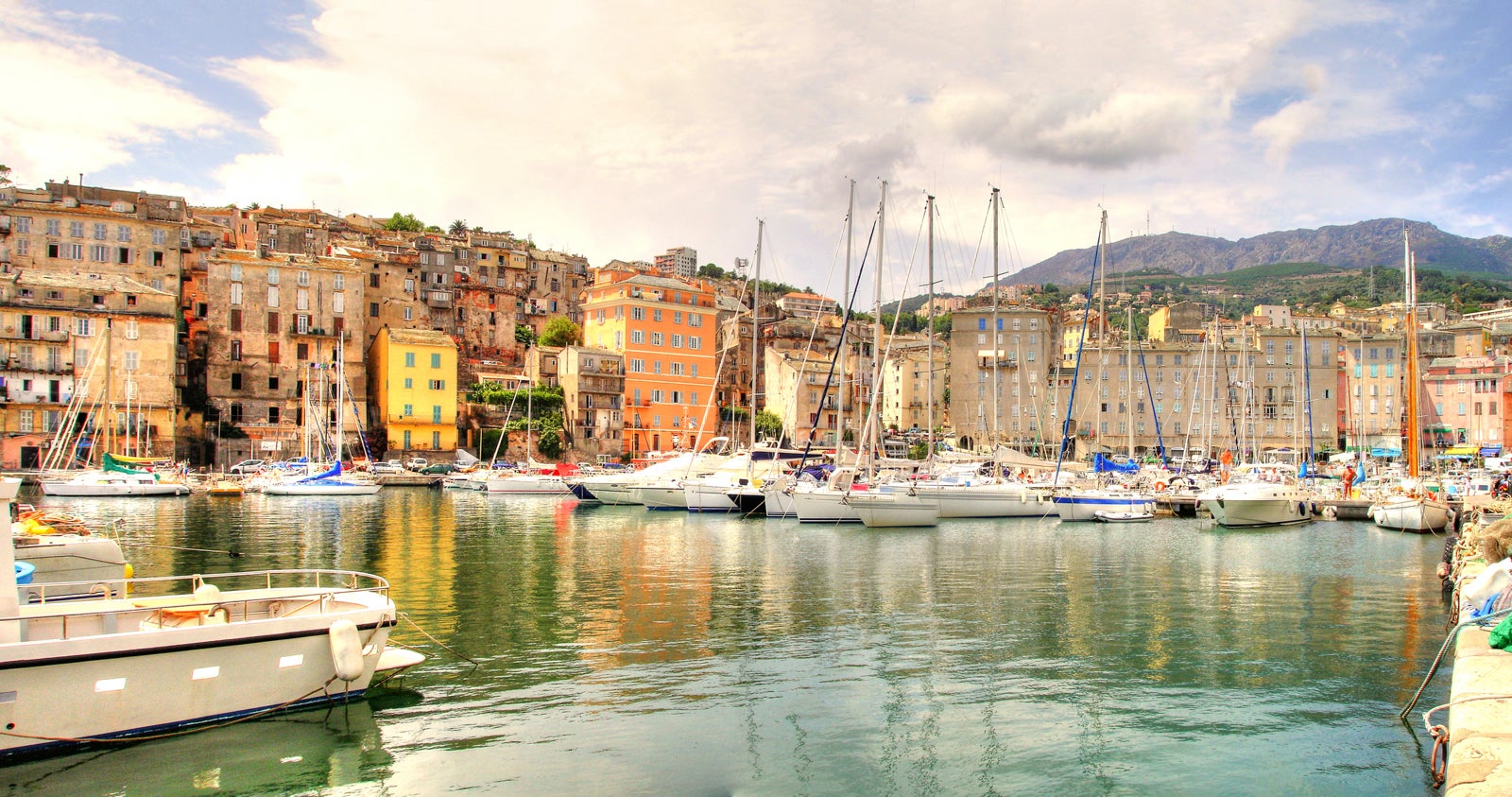 Paris is one of Europe's most romantic and stylish destinations. Bordeaux's wine museum is one of the best in the world. And there's nothing sexier than spending a hot summer's eve in Saint Tropez.

But the country's allure goes beyond its most popular cities, and of course, the sophisticated French Riviera. France is home to many islands, both small and large, that are scattered throughout the Atlantic and the Mediterranean Sea (and around the world, but this article won't focus on French overseas regions and territories, just those in European waters).

Here are some of our favorite French islands to explore this season, from popular to off-the-beaten-path.

France's largest island is located between France and Italy, sitting just north of Sardinia. Almost half of the island is part of the Parc Naturel Régional de Corse, filled with steep gorges, rushing rivers and a number of hiking trails.

Meanwhile, beach bums can have their fill of white sands and turquoise waters, all which feel decidedly more exotic on Corsica than on mainland France. Some of the most interesting beaches are Roccapina, named for its famous landmark rock shaped like a lion, and Palombaggia, dotted with boulders and evergreen trees. The island has four airports, and you can fly nonstop from London to the Bastia Airport in northern Corsica (BIA) or the Ajaccio (AJA) on airlines like EasyJet and Air Corsica seasonally.

Part of the Îles d'Hyères four-island archipelago off the coast of southeastern France, Porquerolles has the beauty of the French Riviera without any of the pretension. The island has a few small villages and is protected to avoid overdevelopment. The south is a visual delight, with rocky cliffs and viewpoints accessible via hiking trails. The north, which is best reachable from the port by bike is ideal for a relaxing beach day -- the most popular is Plage Notre Dame.

From the U.K., you can fly nonstop to Marseilles (MRS) with a number of carriers, and then go by car or rail to Toulon, which is close to the port. Then, you hop on a ferry to the island. There are a few other ports in the area with boats to Porquerolles if you're coming from a different direction.

Another island part of the Îles d'Hyères archipelago, Port-Cros is car-free and best for those not needing many amenities and searching for a tranquil holiday filled with nature. The entire island is protected as a natural park (its waters included). With no cars in sight, Port-Cros is made for those wanting to hike challenging trails and take daily walks to serene beaches.

Alternatively, divers can admire a variety of underwater species as well as many shipwrecks from World War II. It's best to fly to Marseilles (or Nice) and drive to the Hyères ferry port Saint-Pierre Marina, where you can catch a boat to the island.

Also a car-free island, Île de Batz has white sandy beaches, a rocky coastline, charming villages and picturesque green countryside. The best beaches are on the northwest side of the island, and for those needing a break from sand and waves, visit Jardin Exotique Georges-Delaselle, a botanical garden full of unique plant species. Another highlight is the Trou de Serpent, a rock formation said to have been the spot where an evil dragon was tossed into the sea.

Just 15 minutes away by boat from Roscoff, you can easily spend a half-day here, or stay for a few nights for a truly peaceful holiday. Roscoff is just under an hour by car from Brest. Ryanair flies from London Southend (SEN) to Brest (BES) nonstop twice weekly.

Further reading: Flying with Air France? All you need to know about the menu

This island in western France is actually connected to the mainland by a bridge for easier access. Oléron has many small fishing villages but is best known for its oyster farms, so make sure to visit the island if you love to eat this shelled gastronomic delight which you can pair with locally made Pineau des Charentes, a French aperitif. While you can visit some of Oléron's quiet beaches, the island's charm can be found in its historic sights. Some of the best are the quaint village of Saint Georges d’Oléron, home to a famous 11th-century church and the iconic black-and-white-striped lighthouse of Chassiron.

To arrive, combine a visit to the island with a trip to wine country by flying to Bordeaux (BOD) from the U.K. nonstop on airlines like Ryanair, EasyJet and British Airways. Then, rent a car and drive to the island (2.5 hours), using the bridge to cross.

One of the more popular French islands, Île de Ré is just slightly further north than Oléron. Another island that is best explored by bike, Ré features over 100 km of cycling paths that are (mostly) flat. Cruise past marshes, beaches, idyllic villages, even vineyards and World War II bunkers. Make sure to take in the island's fortifications, classified as a UNESCO World Heritage site, including a harbor, citadel, fortress and more that were built in the 17th century to protect the island.

Low-cost carriers like EasyJet and Ryanair fly nonstop from London hubs to Nantes (NTE). Then, you can drive to the island in just over two hours (it's connected to the mainland by bridge). Or, Ryanair flies five times per week from London (STN) to La Rochelle (LRH), the town which is home to the bridge crossing into Ré.

The largest of Brittany's islands, Belle-Île-en-Mer is similar to many other French islands in that it has a little bit of everything -- from blissful beaches to steep cliffs to rambling little villages. Besides learning about the island's lengthy history (it was once occupied by British troops), you can chow down on the island's famous fresh lobsters and visit some of the island's unique lighthouses, like the solar-powered one in Pointe des Poulains.

If you want to visit Belle Île en Mer when it's buzzing with sunshine, energy and music, plan to go in July and August during the island's famous opera festival, Lyrique en Mer. The month of May sees one of France's most popular sailing races, the Tour de Belle-Ile. Low-cost carriers like EasyJet and Ryanair fly nonstop from London hubs to Nantes (NTE). Then, you'll need to drive to one of the ports to catch a ferry. Some are only open seasonally, but Quiberon is open year-round.

Just off the coast of Brest, Ushant is located just at the edge of the English Channel. Known as France's most westernmost point, the island has an extensive maritime history, home to a number of lighthouses and shipwrecks off its coast. But many travelers come for the bird-watching -- the island is home to hundreds of bird species. And, you'll also notice many small sheep wandering around Ushant. Mostly dark in color, these rare Ouessant sheep are native to the island, as well as a special species of bees that have managed to survive on the relatively isolated landmass.

Île de Bréhat is actually made up of two islands that remain separated only during high tide. Decidedly quaint thanks to being car-free, Bréhat is best explored via bike. Make sure to see groups of puffins, which hang out along the pinkish, rocky coastline. If you'd prefer to walk and not bike, some of the best walking paths are in the wilder northern region, where you can visit the island's lighthouses.

Bréhat is easily accessible with just a 10-minute boat ride from Pointe de l’Arcouest, which can be reached in just a couple of hours by car from Brest. As mentioned above, Ryanair flies from London Southend (SEN) to Brest (BES) nonstop twice weekly.

Further reading: Second cities: The best destinations to add onto a trip to Paris

With around 40 different islands in the Gulf of Morbihan, it may be tough to pick just one. But Île-aux-Moines may just be the best choice for an all-encompassing holiday. Part of the island feels like an exotic beach paradise, partly covered in thick groves of trees, sending you right into nature's landscapes. Biking, sunbathing and leisurely sipping French wine while nibbling on oysters are some of the best activities to do here.

And the best part? It's just a five-minute boat ride from Port Blanc, which is an hour-and-a-half drive from Nantes. Low-cost carriers like EasyJet and Ryanair fly nonstop from London hubs to Nantes (NTE).

While you can never go wrong visiting Paris or Nice, a trip to one of France's beautiful islands may be the perfect spring or summer getaway. Whether it's hiking, beachcombing or enjoying French gastronomy, the French country has an island just right for your holiday.