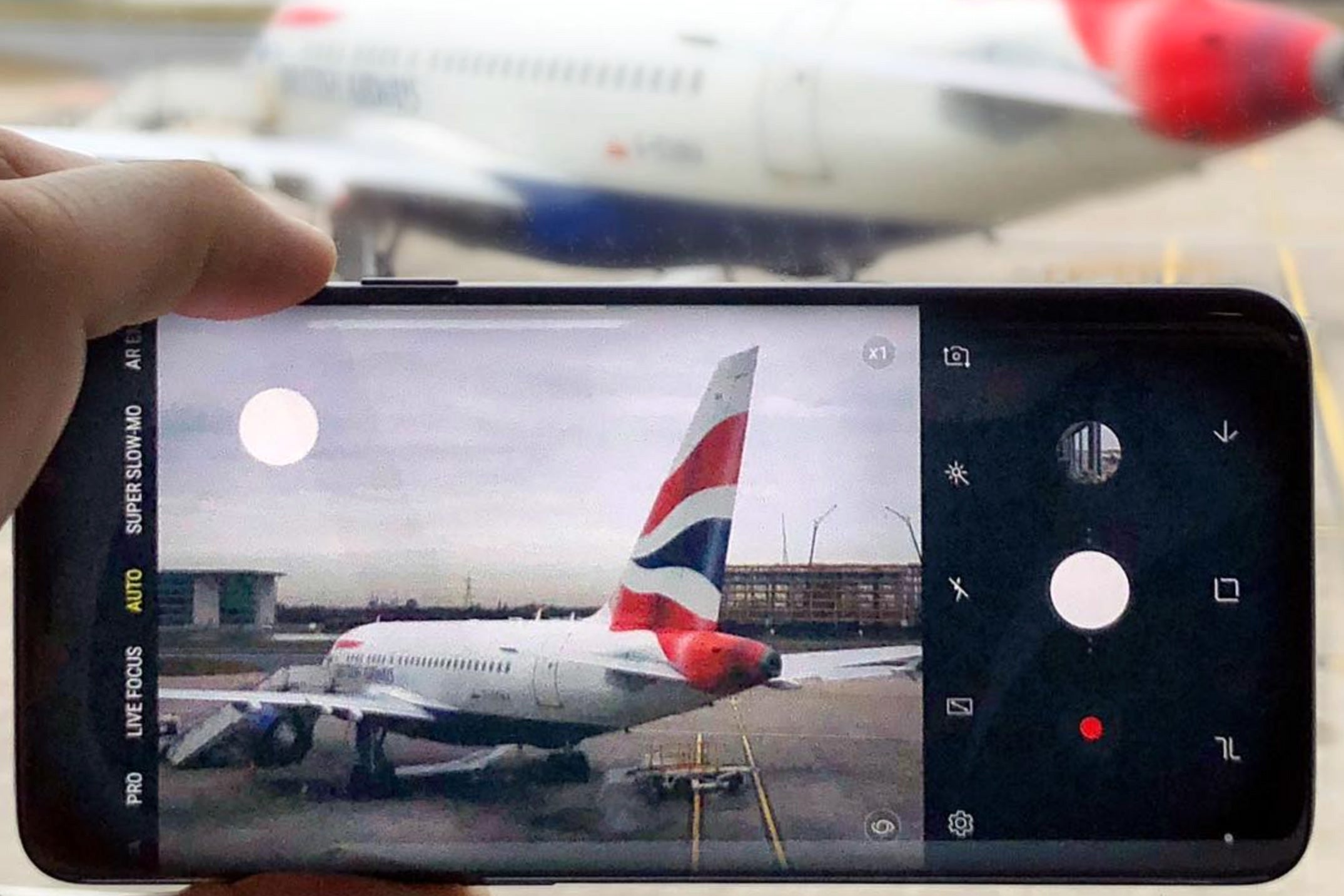 Until recently, I was a pretty happy iPhone X user. There was one ever-present bug that drove me up a wall, as I'll explain a bit later on, but Apple's latest smartphone offers a fantastic camera, plus a slew of other features — like a long battery life and a sharp and vibrant screen — not to mention the ability to add just about any app a frequent traveler desires.

Then I got to try the Samsung Galaxy S9+ this month, which I paired with my Google Project Fi SIM. Whoa, Nelly!

While I'll be keeping the iPhone around as well, these are the five things that have me convinced to make the GS9+ my new go-to — especially when I'm on the road.

On Friday, I intentionally shot a flight review entirely with this smartphone. I would have never considered doing that before. Not only were the pictures and video exceptionally sharp, using a phone is also more discreet, since it's certainly not unusual for casual travelers to document a premium-cabin trip with a smartphone.

Before that flight, I covered the ITB Berlin travel trade show for our new Instagram account exclusively using the Galaxy S9+. Between my time at tech publications and now TPG, I've probably covered some 100 trade shows around the world — rarely with anything less than an interchangeable-lens camera. Naturally, I was a bit hesitant to leave my trusty Sony RX100 M3 point-and-shoot back at the hotel.

Fortunately, the GS9+ performed like a champ — the pictures captured were tack-sharp, even in low-light, with accurate colors and exposure. The video quality is out of this world: My version of the Sony RX100 doesn't shoot in 4K, but the Galaxy can even handle 4K video at 60 frames-per-second, though I kept mine set to 30fps so I wouldn't lose the integrated video stabilization. (To view the above video in 4K, head to this YouTube page, click the gear at the bottom right of the frame and select the 2160p option.)

I had my iPhone X along as a backup, and my Sony RX100 M3 in my bag at the hotel, but the GS9+ was truly all I needed — with a second 2x telephone lens, it's almost as versatile as the Sony. While I was able to travel incredibly light even with the point-and-shoot in my bag, I feel confident enough to leave it back in New York next time around:

With two full days of shooting hundreds of photos, plus a few videos, I was quite concerned about battery life, especially given all the social sharing I planned to be doing. On my busiest day, the battery only dropped to 30%, though, and I could see it lasting even a couple of days with lighter use. With a relatively gigantic 3,500mAh battery, and after my experience in Berlin, I wouldn't hesitate to head out for a day and night on the town while leaving my charger back at the hotel.

I could get very technical here, throwing around stats like pixels per inch (529), display type (Super AMOLED) and resolution (2960 x 1440), but really all you need to know is that the GS9+'s screen looks great. It's also quite large, at 6.2 inches, which makes it more appealing for viewing content than the iPhone X, which has a 5.8-inch screen.

Since I spend more time creating content than consuming it, this screen can be more of a curse than a blessing; colors appear far more saturated than on my iPhone, and when I tweak them for Instagram on the Samsung, for non-Galaxy owners, they could end up looking more dull than they otherwise would.

I like using the Hyperlapse app to film takeoffs and landings, but I find that the quality isn't all that great. Fortunately, the GS9+ offers the feature directly within the camera app, and it looks far better — though there is a bit of a learning curve.

My first video didn't pan out as expected — I essentially wasted a rare central London approach by misusing the feature, leaving hyperlapse in "auto" mode, which captured at variable speeds and didn't give me any control:

Lucked out with an incredible approach to London City Airport! Which I promptly wasted by misusing the Galaxy S9+ Hyperlapse mode ? Next time I won't move the camera... and maybe I'll shoot a 4K video instead. pic.twitter.com/Ganl40adwq

My second attempt was far better, after I figured out how to adjust the speed manually. I simply hit the speed button, selected 4x and I was good to go for our landing at JFK:

Figured out hyperlapse with the GS9+... you can adjust the speed manually before shooting. Duh! So much better this time. pic.twitter.com/wNVSVfv4no

This one might be specific to me — at least if you ask Apple — but with my iPhone X, Instagram, Twitter and the native Photos app would freeze up whenever I tried to select a photo or video to upload (basically every few minutes).

Instagram would crash constantly too, so I ended up spending far too long preparing each post. I finally "fixed" the bug by formatting my device, ditching my entire iCloud account and setting up a new one, but the months-long experience certainly left me eager to move on.

Needless to say, my iCloud issues haven't been a factor with the GS9+ — I can select and upload photos instantly, and Instagram has only crashed a few times — rather than every few minutes.

While the Galaxy S9+ is my new top smartphone pick, it's also one of the most expensive devices on the market; without a trade-in, an unlocked phone will run you $840. I ended up paying $50 to add a 128GB microSD card, since I figured I'd burn through the 64 gigs of built-in storage pretty quickly.

(Note that as is standard practice at tech publications, Samsung provided me with a GS9+ review sample, as I wanted to try out the device before it hit the market.)

There you have it: I'm very happy with the GS9+ and I'm looking forward to capturing more great content on my next trip. If you're looking for a more in-depth review, I recommend heading over to my former tech home, Engadget, where you'll find detailed looks at both of Samsung's latest smartphones — including the review video above.

Regardless which phone you choose as your travel companion, be sure to use a card that offers cell phone protection, such as the Chase Ink Business Preferred Credit Card or Wells Fargo Cash Wise Visa® card.