The Bentway, Toronto's Newest Attraction, Is a Model for Other Cities 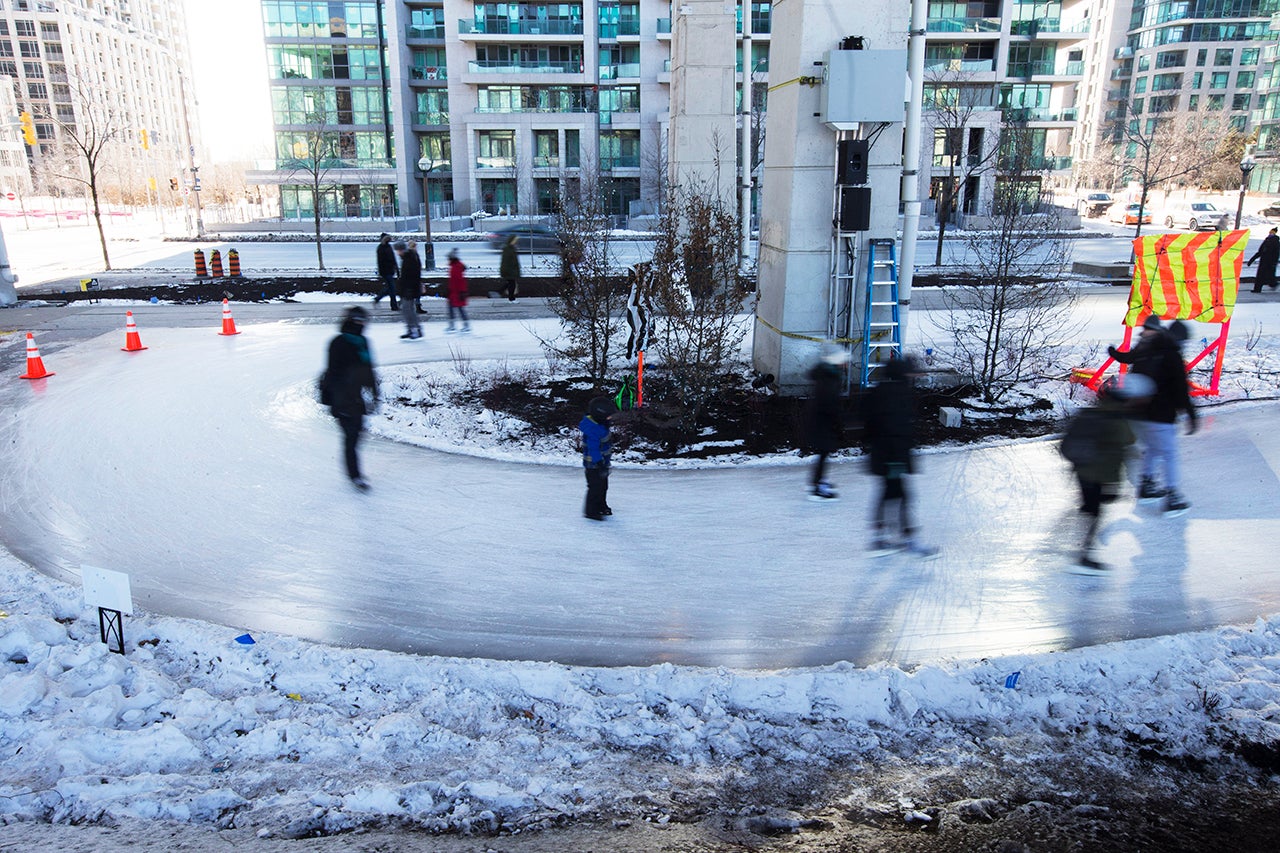 The Bentway, Toronto's Newest Attraction, Is a Model for Other Cities
This post contains references to products from one or more of our advertisers. We may receive compensation when you click on links to those products. Terms apply to the offers listed on this page. For an explanation of our Advertising Policy, visit this page.

The smash success of New York’s High Line, which now claims more than 8 million visitors annually, is spurring other cities to reinvent derelict public space — and maybe attract a lot of new visitors in the process. Some projects, like Atlanta’s Beltline network of repurposed old railway corridors, will take decades; others like the Frank Gehry-designed River LA in Los Angeles don’t even have opening dates.

But when the chance arose to create an urban “backyard” from dead space under a much-hated downtown freeway, movers and shakers in Toronto didn’t want to wait. And this month, less than three years after it was announced, the Bentway made a splashy debut that shamed naysayers in Canada’s largest city.

The project takes its name from massive concrete “bents” that support the Gardiner Expressway, an elevated roadway that effectively cuts off downtown’s southwestern tip from the rest of the city. Though much of the Gardiner occupies prime downtown real estate, with Lake Ontario and the CN Tower steps away, the space underneath it became a garbage-strewn eyesore.

“We’re bringing color to what had been a very gray space,” Julian Sleath, chief executive of the Bentway Conservancy, told TPG on a January tour of the site. “The Gardiner has been seen as a barrier. But the Bentway will encourage crossover traffic. It’ll encourage connections between north and south. And it will connect people all across the city.”

The Bentway moved at what counts for lightning speed in urban planning since its announcement as Project: Under Gardiner in 2015. A local philanthopist, enthralled by the idea, ponied up $25 million CDN. The Bentway Conservancy, Sleath’s group, moved quickly to negotiate a land-use agreement with the City of Toronto. Phase 1 of the project used City land, while for future phases rights will be secured from a patchwork of owners.

More importantly, said Sleath, the Bentway will provide much-needed public space to more than 70,000 nearby residents whose downtown neighborhood was a desolate industrial blightscape just ten years ago. “There’s a lot of high-density development in this part of downtown with no outdoor space,” he said. “The Bentway is their backyard.”

As if to underscore the desire for change around the Gardiner, which Jane Jacobs herself — the activist who stopped a highway from slicing through downtown Manhattan — famously hated, Torontonians have welcomed the Bentway with enthusiasm, if not rapture. On the painfully cold opening weekend in January, more than 20,000 people showed up to skate, dance to DJs, and sip much-appreciated hot cider.

Neighbor Jordan Howard, a sales executive who recently returned to Toronto after years in Texas, called the Bentway “extraordinary. It’s incredible to have such an integral part of Canadiana in your backyard.” Howard, like most locals, holds the Gardiner “in disdain. I drive my wife to work on it every morning. This feels like a reclaiming of the entire area.” Thousands more condo units are planned for the land surrounding the Bentway, Sleath said.

The speed and ingenuity of the project might also make a role model for other cities. “I love the Bentway,” said Emma Jane Bloomfield, director of the High Line Network, a consortium of “infrastructure reuse” projects across North America. “We’ve been so impressed by how quickly they moved — it’s one of the fastest projects to come to fruition.”

Projects in the High Line Network universe include Miami’s Metrorail, San Francisco’s Crissy Park, Detroit’s Dequindre Cut, and 16 other reimaginings of “underutilized infrastructure”. Some, like Chicago’s 606, are recently opened works in progress; others, like Miami’s Underline, a project not unlike the Bentway, are still just gleams in a planner’s eye.

Bloomfield said the High Line Network represents a growing movement in cities worldwide. “We’re seeing a moment i where the pressures of density are increasing. There’s also a lack of traditional open space that could be repurposed to create public space or parkland. And it’s happening in the context of land prices going up,” she said. “So citizens and elected officials are increasingly turning to aging 20th-century infrastructure as sites for new kind of public space. People are wanting to connect with nature, with the outdoors, and with each other.”

The challenge, Bloomfield said, is making sure these projects don’t become tourist hubs at the expense of locals. “While we’re excited about all of these spaces becoming destinations with real amenities, we’re also seeking to help weave these spaces into the fabric of their own communities,” she said. “We’re hoping for them to become community and city amenities first and foremost, rather than tourist destinations. When you have a lot of people from out of town descending on these spaces, people in the neighborhood don’t always have feelings of ownership.”

Sleath thinks both a tourist hub and local hotspot aren’t mutually exclusive. “Through advocacy and programming, we’re making sure it’s a destination for locals. But through design and innovation, we’re also making sure it’s a marquee destination,” he said. “Locals are our priority, but tourists are a key market as well. We want tourists to come west of the CN Tower,” an area long perceived as off-limits because of the Gardiner.

If the High Line’s an indication, the Bentway will prove a good investment for Toronto. One report estimates High Line-related tourism and development has added nearly a billion dollars to New York City tax coffers.

“It’s not just about a beautiful garden or a convenient pedestrian trail,” Sleath said. “This is the start of a five, 10, 20-year adventure.”

This story has been amended to show that land-use rights for the Bentway have been secured from the City in phase 1 and different owners for future phases. It was also corrected to indicate that attendance statistics referred to the opening weekend, not opening day.