10 Places Outside of China to Celebrate Chinese New Year 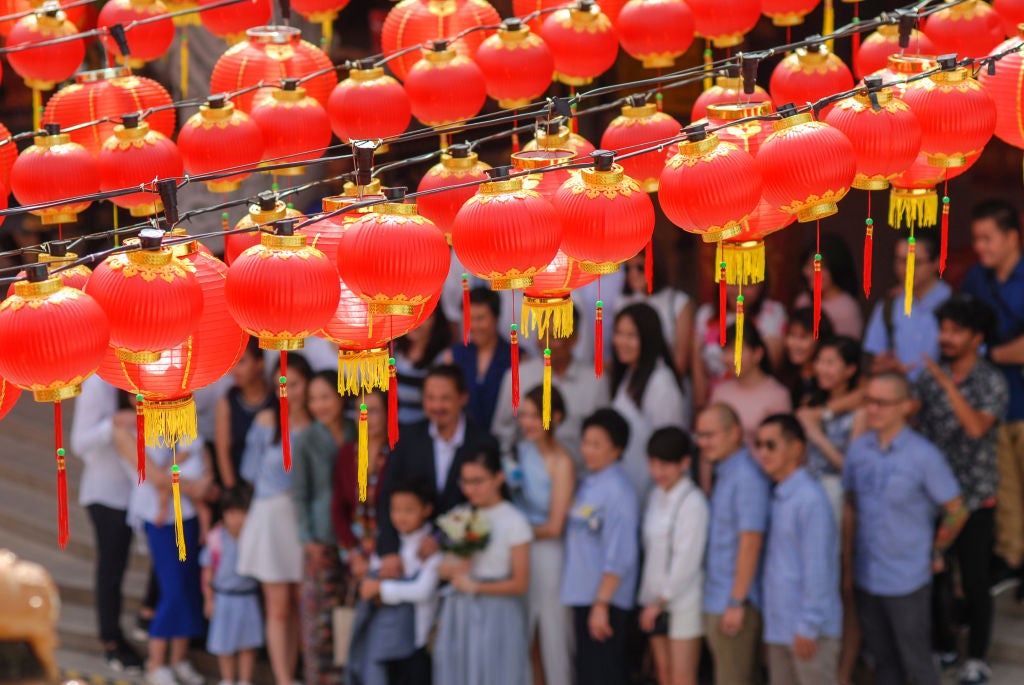 Chinese New Year, which is celebrated during the turn of the traditional lunisolar Chinese calendar, falls on February 16 this year and countries around the world are revving up festivities for the Year of the Dog. Even Gucci is getting in on this year's zodiac representative, adding canines to their most recent collection. The festival is centuries old and comprises events that center around myths and customs that have been handed down from prior generations. Undoubtedly, China leads the pack with the most events happening, but take a look at how other countries and cities are gearing up for their own Lunar New Year celebrations.

Singapore's Chinese New Year is sure to catch your eye with its bright lights and nonstop revelry. The action takes place in the city's Chinatown — the streets are filled with beautifully designed lanterns hung above the street. There will also be celebrations featuring colorful parades, seasonal markets and lion dances throughout the neighborhood. Red is the color of the season, so expect to see crimson dangling everywhere from lights to clothes to the paper pouches that kids receive filled with money — a Chinese New Year tradition. Outside of Chinatown, Singapore will have a parade at the city's Formula1 Pit Building and a floating platform of lights on the River Hongbao.

Celebrate the Year of the Dog Down Under at the Sydney Harbor. The famed bridge will glow red and fireworks will be shot off and, of course, the harbor will be decorated with the red lanterns as well. Look for musical performances from choirs and classical musicians and even tai chi and kung fu shows. Sydney's Chinatown will be guarded by two watch dogs curated specially for the event. The red and blue dogs will stand at nearly five meters and are said to reflect the opposite qualities of yin and yang; there will also be a graduation ceremony for real-life guide dogs.

There are several events taking place in NYC to celebrate the Chinese New Year. Beginning in January, Chinatown is taken over by dragons, dancers and lanterns. Chinese restaurants offer special menus with delicious food to celebrate the Lunar New Year and on February 25, there's a New Years parade in Lower Manhattan that crisscrosses through the borough's Chinatown — plus, a parade that will roll through downtown Flushing, Queens.

San Francisco's Chinese New Year celebration is one of the largest in the world. The festivities begin in February and last until March, with the Grand Parade being the main draw during the holiday season. The city's parade tradition began in the mid-1800s when Chinese immigrants came to the US looking for work. More than 3 million people watch this parade every year, which features a 28-foot long Golden Dragon that takes more than 100 people to operate and move through the streets of San Francisco.

Vancouver hails their Chinese New Year event as a "cultural festivity that you won't want to miss." This year marks the city's 45th time the parade rolls through and will feature performances from dance troupes, marching bands and martial arts groups. The parade is made up of more than 3,000 participants from Vancouver's cultural organizations and attracts more than 100,000 people every year from across Canada and beyond.

Each year during the Chinese New Year in Jakarta — locally known as Imlek — the city revs up in numerous ways, most notably among the culinary community. Special menus are offered across the city in recognition of the Lunar New Year. The mall even puts on free lion dance performances and the city's Chinatown is stocked with Chinese ornaments and decorations for purchase. There's a midnight fireworks show that attracts tons of locals and tourists and many people flock to Vihara Dharma Bhakti, a Chinese temple, to release birds and gather luck for the coming year.

Yaowaraj, Bangkok's Chinatown, comes alive during the Chinese New Year. Crowds of people celebrating line the streets and pop firecrackers and watch dragon dancers. Chinese restaurants and shopping malls have special Chinese New Year sales and offerings ranging from free feng-shui advice to menus curated for the event. Legend has it that on New Year's Eve, a mythical beast called Nien comes to town and afflicts local homes. To avoid Nien, residents put food outside, set off firecrackers and wear red attire to scare off the beast, making Chinese New Year a mainstay event in Bangkok with hundreds of thousands of revelers.

Chinese New Year celebrations last 15 days in Kuala Lumpur, with the most exciting events happening in the first three days. Most of the action takes place in Chinatown on Petaling Street, where Chinese temples are filled with locals who come to pray and the streets are lined with lion dances and people lighting firecrackers. All the malls in Kuala Lumpur are decorated in red and gold, ensuring the businesses will be blessed in the new year.

This year, New Orleans is partnering celebrations for the Chinese New Year in accordance with its tricentennial celebrations. Harrah's Casino is hosting a Chinese Opera put on by the Houston Chinese Consulate. Revelers can even take a carriage ride to and from the event just like music lovers used to do in the Big Easy in the 1800s.

Chinese New Year in Penang is especially lively because of the large Chinese population in George Town and the surrounding area. On the eve of Chinese New Year, Malaysian Chinese gather together to eat, gamble and celebrate with their families. There are several parades and events during the holiday season, including one at the Temple of Supreme Bliss, which gets decked out in colorful, festive lights; more than 200,000 light bulbs and 10,000 lanterns illuminate the temple. There's also a hot air balloon party, a birthday party for a Chinese deity and a party thrown by the government to celebrate Penang's recognition as a UNESCO World Heritage city.