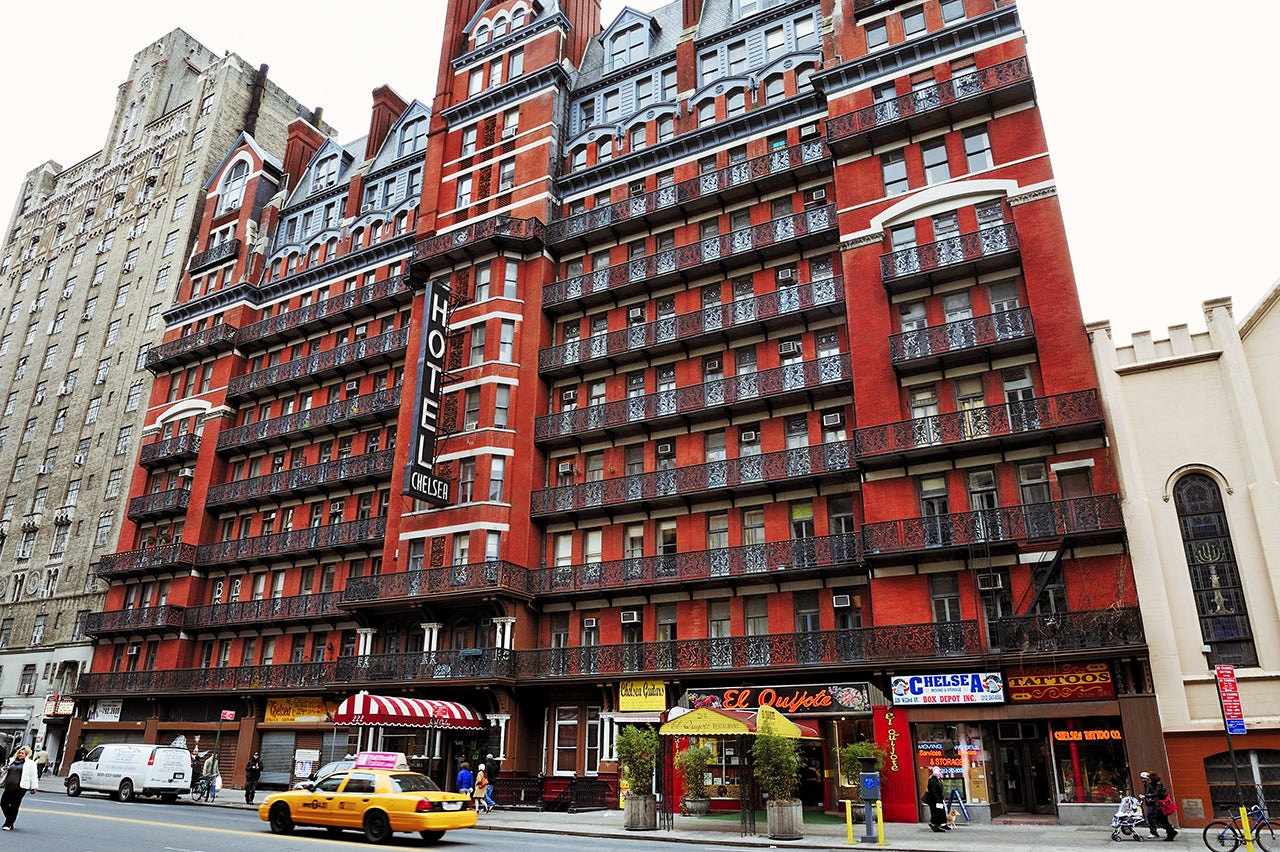 9 New York City Hotels Made for Music Lovers
This post contains references to products from one or more of our advertisers. We may receive compensation when you click on links to those products. Terms apply to the offers listed on this page. For an explanation of our Advertising Policy, visit this page.

For the first time since 2003, the Grammy Awards will be held in New York this year, and though music’s biggest night may be taking place at Madison Square Garden, there are a ton of other places nearby that are steeped in music history as well, including a slew of hotels that have played host to some of the biggest names in music. From rock-star in-room fires to the Beatles’ preferred lodgings, we’ve got your list of the New York hotels that have made music history.

By far the most famous music-related hotel in NY, the Chelsea — which is now closed for renovations but plans on reopening later in 2018 — is on the National Register of Historic Places, which should establish that this isn’t just any old hotel (it was built in the 1880s). Madonna shot part of her Sex book in Room 822. Leonard Cohen and Janis Joplin had an affair in Room 411. Nancy Spungen — Sid Vicious’s girlfriend — was found dead there in 1978. Songs have been written about the hotel through multiple generations of musicians, from Bob Dylan to Bon Jovi to Ryan Adams. The Chelsea and the NYC music world are, essentially, synonymous with each other.

Parts of Almost Famous were shot in the lobby of the Gramercy — not just because the historic hotel was available, but because Cameron Crowe knew there was no way to give his ‘70s music movie a sense of realism without it. Nearly every classic rocker made his or her way through the hotel at some point: The Stones lived there for a bit; Bob Marley stayed there; David Bowie was a guest. Debbie Harry and Chris Stein of Blondie lived in Room 501 (an iconic, sunlit photo of the singer was taken there). In the early 2000s, the hotel was acquired and renovated by Ian Schrager, but its legacy lives on: Warhols dot the property, and the upstairs Rose Bar hosts emerging musicians (like Dawes’ Taylor Goldsmith) for stripped-down shows.

If you’re deep into hip-hop, you know the 75-room Mercer: It’s where Jay-Z and Kanye West holed up and set up a studio over three totally gutted rooms to record their collaborative album Watch the Throne (Jay raps about it on the song Otis: I’m about to call the paparazzi on myself/uh, live from The Mercer/run up on Yeezy the wrong way I might murk ya). When the duo later returned to play Madison Square Garden, they thanked the staff of the Mercer by gifting tickets to the show to everyone who worked at the hotel. And Watch The Throne isn’t the only notable hip-hop album recorded there: Frank Ocean also set up shop for part of Endless.

The largest hotel in the city boasts 1,907 rooms and has a deep-seated past in the music world: Elvis Presley was a guest and held press conferences here; the Rolling Stones once called it home while they were on tour; and The Beatles stayed here when they shot the Ed Sullivan Show, which propelled them to fame in the US. Later, John Lennon would return to the hotel to write the iconic song Imagine on the Hilton’s stationery.

The Waldorf’s always been known as one of the classiest hotels in the city, which may be why Frank Sinatra chose to take residence there from 1979 to 1988. Thanks to the Waldorf’s enduring legacy of wealth and status, it’s still a favorite hang today: On Rick Ross’s Maybach Music III, rapper T.I. exclaimed, Fly to NY, meet me at the Waldorf/Astorian, Architecture Victorian/ridin' in the past like you're driving a DeLorean.

This longstanding, teeny-tiny, 13-room Montauk getaway is closed for the winter but expected to open up again in the spring, when it will once again book visits by Rolling Stones fans obsessed with the summery vibes of the song named after it and inspired by the Stones’ trip to Montauk to visit Andy Warhol — and it's the only hotel open in the neighborhood. Nowadays, it’s got more of a dance-club vibe: Fat Joe played there on Labor Day last year.

Florence Welch’s public persona may be sort of fairy-dusty, but she’s apparently got a streak of rock-star debauchery in her as well: In 2012, she set fire to her room at this Lower East Side hotel (which also gets credited as one of the most haunted hotels in NYC) after a night of partying with Kanye West and singer Lykke Li. That said, the cause of the fire is on brand: I’d left a cinnamon tea light burning [when I fell asleep,] she told Q magazine.

Notorious as the hotel where future president Donald Trump first met Kevin McAllister, the Plaza also has a nearly-century-old history of run-ins with the music world as well. Composer George M. Cohan hung out there in the ‘30s, cabaret singer Hildegarde made her name performing in the hotel’s Persian Room in the ‘40s, and Miles Davis recorded Jazz at the Plaza at the hotel in 1958. Of course, the Beatles stayed there too, on their first American visit, and Saturday Night Live celebrated its 40th anniversary in 2015 with a gala at the hotel that included a legendary impromptu one-song set from Prince, who jammed with everyone from Bill Murray to members of HAIM on Let’s Go Crazy.

The former location of the Drake (now a luxury apartment complex, natch) is a stop on Rock Junket’s NYC walking tour thanks to this notorious story: While they were shooting The Song Remains the Same at Madison Square Garden, Led Zeppelin’s room safe at the hotel was robbed of over $200,000 in cash. The thieves were never found, presumably because they lived the rest of their lives out on some beach in Fiji.