The Most Perfect Island in Thailand: A Review of Naka Island in Phuket, Thailand 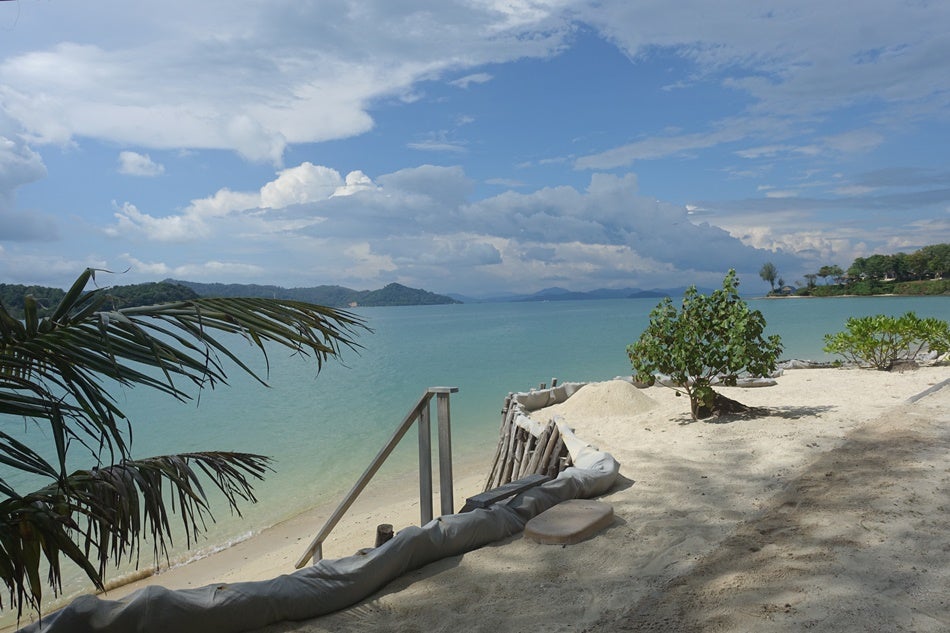 After my exhausting experience at the Ritz-Carlton Koh Samui, I was more stressed out than ever before. I knew that Phuket was even more touristy than Koh Samui, but staying at SPG's Naka Island was the best choice I could have ever made. My only regret was not staying longer — after all, I could have gotten the fifth night free using points.

I wanted to take advantage of the SPG Paradise is Closer promotion where select luxury SPG properties have 35% off award stays (booking and stays must be completed by March 5, 2018, so there's still time to take advantage — TPG himself recently stayed at SPG's Al Maha in Dubai thanks to this promo's discounted award nights). Room rates were going for 26,000 points per night instead of 40,000, which was still a solid chunk of points, but worth it compared to the price tag, which was 24,927 THB ($781) with taxes included. So I booked a two-night stay.

Considering TPG values SPG points at 2.7 cents per point, I got a solid redemption at 3 cents per point — plus, I would eventually be upgraded, so I got an even higher value in the end. Keep in mind you'll have to call the SPG customer contact center to book (888-625-4988), as that’s the only way to get this special discounted rate. I booked a Tropical Pool Villa With a King Bed, which was 4,844 square feet including outdoor space.

I got an email before arriving telling me the benefits I would receive thanks to my Platinum SPG status: VIP in-room check in, daily turndown service, free Wi-Fi, complimentary room upgrade, a one-time roundtrip speedboat transfer between Phuket and the small island the Naka resort is on, late checkout (subject to availability), a welcome gift of 500 bonus Starpoints and complimentary breakfast. Upon arrival I was notified that I would be upgraded to a Sea View Villa With Pool that cost 29,675 THB ($930) per night, giving me a value of 3.6 cents per point.

The Naka Island resort is just off of the Phuket coast on the small island of Naka Yai. All rates came with a speedboat transfer to Naka, but I needed to find my own way to the Ao Po Grand Marina pier. I arranged for a car from the hotel to pick me up from the airport. Although the car pickup service wasn't cheap (2,400 THB, or $75) I didn't feel like negotiating with local taxis. Another option I've had success with in the past is Kiwitaxi, but this service wasn't available in Phuket.

I was met just outside the airport by a man with a sign that said "Naka Island." He assisted with our luggage and told me a car would be there to pick me up momentarily. About 10 to 12 minutes later, the car came and I was on my way. It took 25 to 30 minutes to drive to the pier. From there, it should've taken 10 minutes by boat to the hotel.

Once we arrived at the pier, though, there was a situation — the only negative part of my entire stay. The boat captain wasn't there. The taxi driver wanted to leave me there, but I insisted he stay until the boat came — I really didn't want to be stranded at a pier late at night with all my luggage in tow. I called the hotel after waiting for about 10 minutes, and they were shocked the captain was not there to meet me. They called him, and about five minutes later he arrived. Although I was rather annoyed at this situation, it was obvious the hotel was surprised and more than made up for it, which I'll elaborate further on in the check-in section.

I used a bike to get around during my stay, but I loved the resort so much, I didn't end up leaving often during my two-night stay. I rode to a small village (the only one on the island), which was only about 10 minutes away on bike. The ride was full of lush tropical foliage, and exploring the island was a real adventure.

Although I didn't leave Naka until it was time to go to the airport, the hotel did run free boat shuttles three times per day back and forth for those wanting to explore Phuket. Make sure to notify the front desk if you plan to use the service.

Upon arrival, I was warmly greeted and met with heartfelt apologies about the arrival mix-up. I could tell that the property was stunning even though it was dark out — just stepping off the boat, I began to relax and soak it all in. My introduction to the resort started at the gong — complete with advice on proper gong technique: two rings upon arrival and one ring before departure to alert the dragon of my status.

I was about to head to my villa, but I asked if it were possible to have another upgrade to the beachfront villa thanks to the boat and transport situation.

I sipped a delicious coconut drink post-gong attack while I waited on the upgrade and was told that, yes, I would be given the beach villa, but it would take about 15 to 30 minutes to prepare. The Beachfront Pool Villa was going for 52,548 THB ($1,647), meaning I would end up getting a value of 6.3 cents per point on my treasured Starpoints — score! I decided to eat at the dinner buffet while waiting (but more on that later) — negotiations always make me feel famished!

The villa was absolutely stunning — so romantic!

There was a private pool, steam shower, sauna and hot tub outside that overlooked the beachfront, complete with lounge chairs to sit and enjoy the ambience.

A few guests walked by during the stay, but it felt very private. It said the room was 5,500 square feet, but that definitely included outdoor space.

The room felt luxurious and rustic at the same time — modern with all the amenities but also charming and quaint.

I loved the daybed area and the cool floor mat, where I sat with my computer to check emails.

The room came with a Bose sound system, a 32-inch LCD TV with DVD player, a minibar and safe.

The Wi-Fi was a little slow but it did work, and cell service was perfect throughout the entire resort. I was only allowed to connect five devices at once, which was annoying as my husband and I had more combined, but I happened to remember the free code from check-in I was given while I waited for the room, and used that to connect our remaining two devices.

The air conditioning was so powerful that I actually lowered it, which never happens! Housekeeping set up mosquito netting each night over the bed during turndown service, but I preferred to sleep with the A/C on and the windows closed.

I was thrilled to see the room also came with a Nespresso machine and lots of complimentary water. It was nice to have the robe and especially the slippers, as the floor wasn't carpeted.

I was a little nervous at first that the bathroom wasn't air-conditioned, but it wasn't an issue at all. Going to the bathroom was almost like its own adventure, traipsing down the stone steps into the large, spacious area that came with his-and-her sinks and rustic fixtures.

The food at the resort was fantastic and much cheaper than I expected. The first night, I had the buffet dinner, and it was fantastic, with a solid selection of both Thai and Western food.

Breakfast was also delicious, and I loved that it was complimentary, thanks to my Platinum status. It was cool to see all the different fruits and read about their health benefits.

In total, there were a bar and two restaurants, but one of the restaurants was pretty formal, and I was not in the mood for a fancy dinner. The happy-hour specials at the sunset bar were great, and the sunsets (not provided by the hotel or the bar, but still) were absolutely breathtaking.

Room service was also a wonderful experience — it only took 18 minutes for our food to arrive, and it was set up outdoors at our private table overlooking the ocean.

I really loved the attention to detail, like the do-not-disturb signs shaped as small faces made out of marble (yes, I bought one to take home) and the friendly staff.

The entire property was spotless: impeccably clean and perfectly landscaped.

When I needed to get around, I picked up the phone and almost immediately someone was there to pick me up in a golf cart. But since our room was so romantic, private and perfect, I didn't need to go anywhere besides the sunset bar on the other side of the resort, which I think was about a mile wide.

The resort also featured a pool and a stunning private beach. The pool was really beautiful, and I loved the chairs directly in the water, though I didn't really use it, as I had my own private plunge pool.

There was a 24-hour fitness center, and the hotel offered activities ranging from Thai boxing to cooking classes to kayaking.

I had so much fun utilizing the free bike rental (complimentary for the first three hours and then 250 THB or $8 for the whole day). It was such a fun way to explore the island.

Although I didn't get a chance to test out the spa, the treatments looked luxurious and relaxing.

The resort was family-friendly, though I didn't see a lot of kids hanging around. There was a kids' playroom to keep the little ones entertained.

This property isn't cheap, but it's absolutely worth it. The villas are stunning and incredibly romantic, and the property is located in a gorgeous, tranquil location. The staff is extremely accommodating, and my only regret is not spending more time here. I would recommend this to anyone, but those traveling as a couple or as a family may get the most out of the resort, because it is quiet and romantic, with lots of family-friendly activities. If you can, take advantage of this current SPG promotion and book a discounted award rate to stay before March 5, 2018! If you stay five nights, it will cost you just 20,800 points per night with the fifth night free.