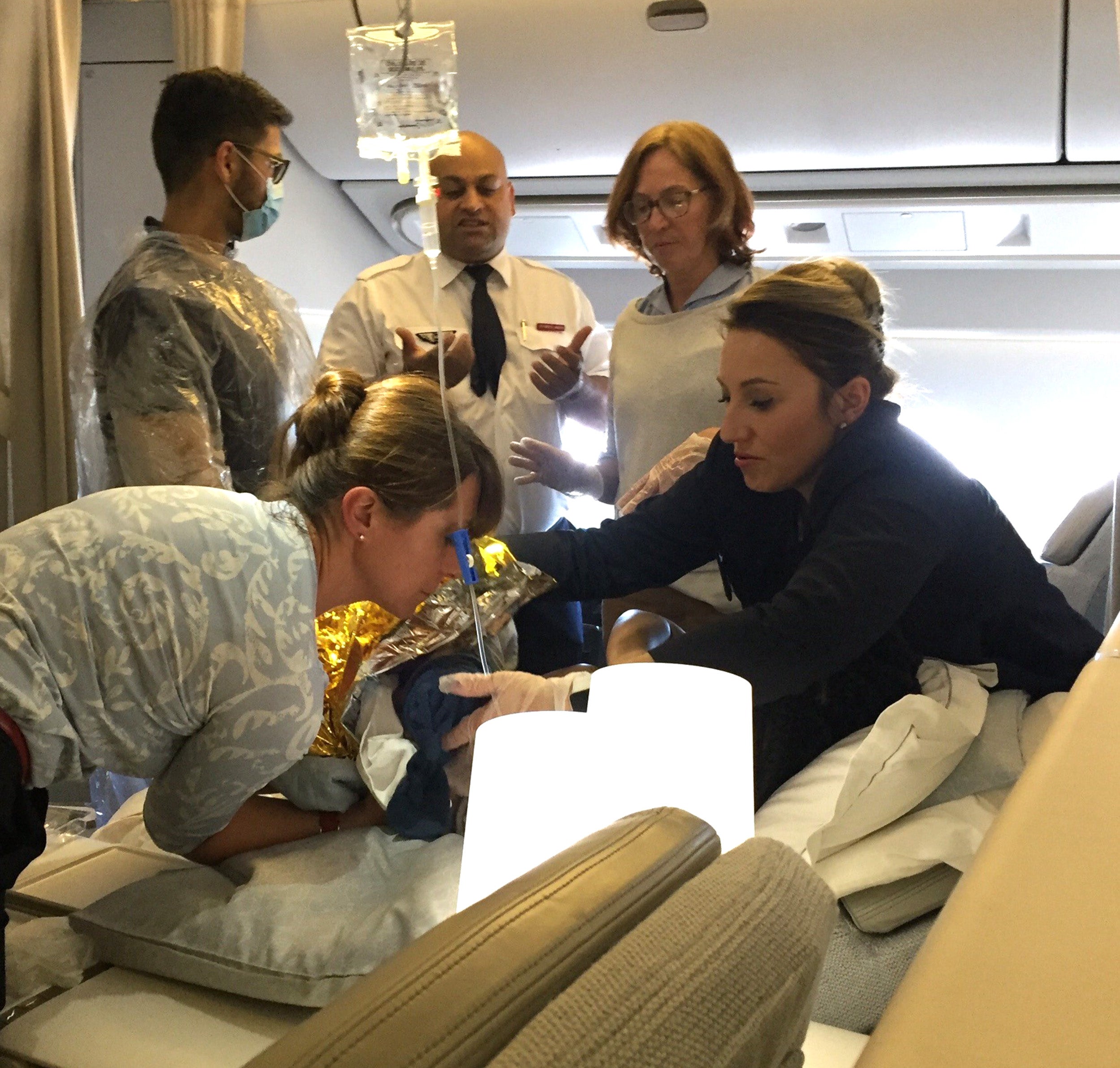 La Première Naissance: Baby Born Mid-Flight in Air France First Class
This post contains references to products from one or more of our advertisers. We may receive compensation when you click on links to those products. Terms apply to the offers listed on this page. For an explanation of our Advertising Policy, visit this page.

Dr. Sij Hemal's flight from Paris (CDG) back to New York (JFK) began with the expectation of Champagne and then maybe some jet lag upon landing. Hemal turned on a movie and settled in to what he thought would be a quiet flight back home. Little did he know that the journey would be one he'd never forget.

About halfway through the flight, a flight attendant made an announcement over the intercom asking if there were any doctors on board the aircraft because a woman had just gone into labor. Toyin Ogundipe, a banker who splits her time between the United Kingdom and Nigeria, started going into labor about halfway through the flight, which happened on December 17, 2017.

The flight crew on board Air France flight 22 — which was nearing the southern coast of Greenland — had to make a decision: Make an emergency diversion to a US military base in the Azores or continue on to New York?

Dr. Hemal, who happened to be sitting next to pediatrician Dr. Susan Shepard, told the crew that he could assist with an on board birth and that the 777-300ER should continue on to New York.

“Her contractions were about 10 minutes apart, so the pediatrician (Dr. Susan Shepherd) and I began to monitor her vital signs and keep her comfortable,” Hemal said in a post on the Cleveland Clinic's website, where he's a second-year urology resident.

The two doctors said it would be better if Ogundipe — who was also traveling with her four-year-old daughter — be moved to the first-class cabin since there was far more room. Air France's first-class product is known as La Première and features one of the nicest seats in the sky, though it's only available on select 777-300ERs and the A380. TPG has flown La Première twice and had a great experience both times.

Ogundipe's contractions started getting closer together as the doctors treated her with any available tools from the aircraft's sparse first-aid kit.

“That’s when we knew we were going to deliver on the plane,” said Hemal, who also remarked that he wasn't worried to assist given that he'd actually helped with seven deliveries during his studies.

After about 30 minutes of pushing, Ogundipe gave birth to a healthy baby boy, who she named Jake. Jake nursed for the rest of the flight to JFK, where they were immediately met by medical personnel and taken to Jamaica Hospital Medical Center in New York.

“I was relaxed because I knew I was in safe hands," said the new mom. "They did everything a doctor or midwife would have done if I was in the labor room in the hospital. Even better, if you ask me.” Ogundipe was released the same day and recovered with her children at a friend's home in New Jersey.

According to the Daily Mail, since he was born in US airspace, Jake Ogundipe is a US citizen.

Hemal continued on to his final destination, Cleveland (CLE), and received a travel voucher and bottle of Champagne from Air France.

“So much could have gone wrong, but it didn’t. Being on that particular flight, sitting next to a pediatrician … it’s like it was destiny,” said Hemal. “Thanks to God, everything worked out.”

According to FlightRadar24, the 77W flew back to Paris later that day. We reached out to Air France to ask what was required to clean up the delivery after the flight. An airline spokesperson wouldn't confirm whether one was needed or not, but said that if a special cleaning of a specific area of the aircraft was needed, it uses a company to assist with that task.