Here's the Best Free Upgrade Any American Airlines Elite Can Get 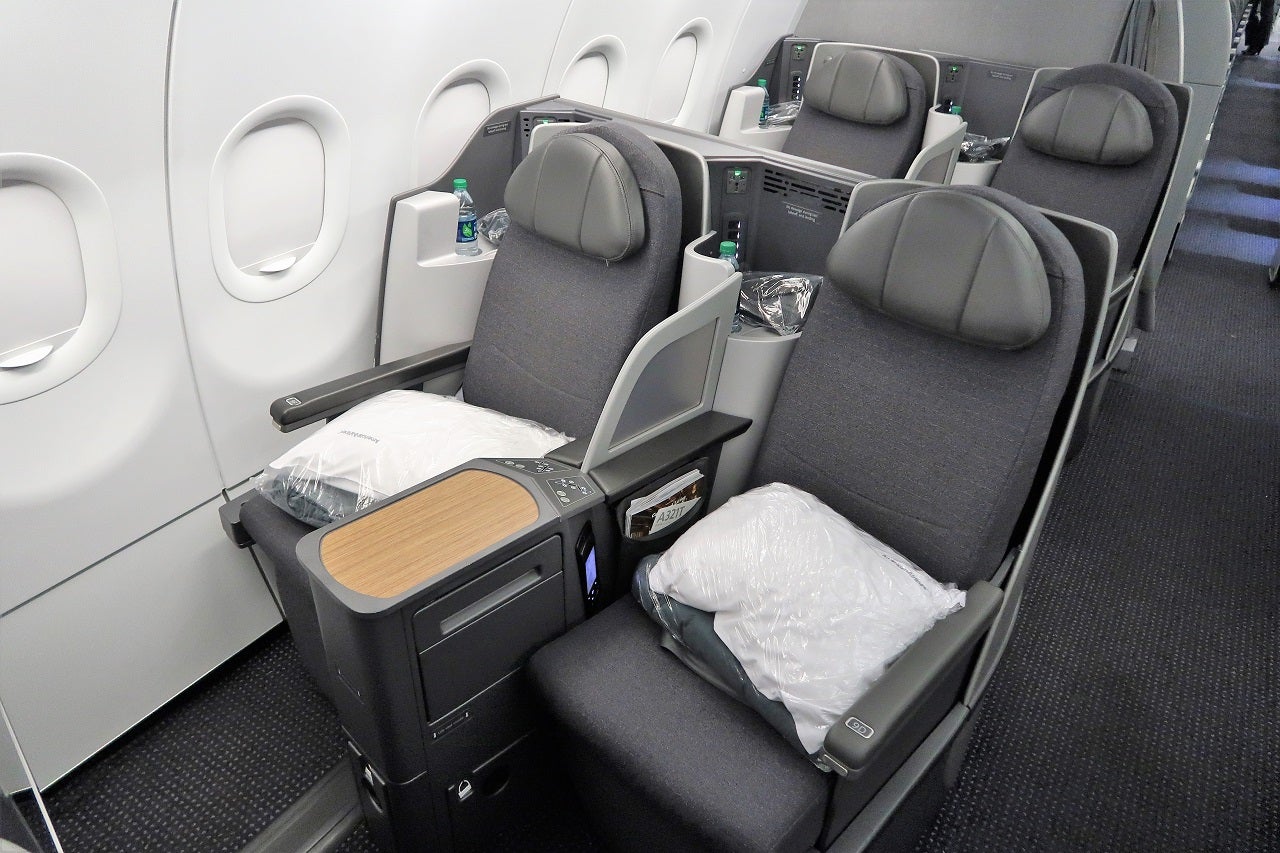 Here's the Best Free Upgrade Any American Airlines Elite Can Get
This post contains references to products from one or more of our advertisers. We may receive compensation when you click on links to those products. Terms apply to the offers listed on this page. For an explanation of our Advertising Policy, visit this page.

Imagine preparing yourself — mentally and physically — for an almost-seven-hour flight in a standard, cramped economy seat, when suddenly you hear your name being called over the loudspeaker to alert you that your upgrade cleared. You're still on the same flight, but now you get to travel in a lie-flat business class seat with international business class-style meals, amenities and service — without paying an additional penny.

This happens to elites daily on American Airlines' flights between New York (JFK) and Los Angeles (LAX) and San Francisco (SFO), making it the best upgrade that any American Airlines AAdvantage elite can get using AA's 500-mile upgrade system. Even the lowest-tier (Gold) elites sometimes score an upgrade on these routes. On my JFK-LAX flight Saturday night, at least one Gold got the upgrade. When I was sharing my experience on Twitter, @iflyplaces notes he too had gotten the upgrade as a "lowly Gold:"

This upgrade is completely free for Executive Platinum and Platinum Pro elites, as a perk of those tiers. Gold and Platinum elites have to shell out just five 500-mile upgrade coupons for the one-way upgrade between JFK-LAX or six for JFK-SFO. But, if your Gold/Platinum experience is normal, you're earning these coupons far faster than you're using them. However, if you're short, you can buy coupons from AA for $40 each.

In addition to being one of the longest flights available to upgrade using 500-mile certificates, the cabin configuration of these specific aircraft make these flights special. While you'll find A321s with no in-flight entertainment or power in first class flying on long domestic routes like Philadelphia (PHL) to Las Vegas (LAS), this specially configured "A321T" aircraft is a whole different story. The carrier developed a sub-fleet of these "A321T" aircraft for the sole purpose of serving the highly-competitive transcontinental routes between JFK and LAX/SFO.

The three-class aircraft feature 10 lie-flat first-class seats and 20 lie-flat business-class seats. AA often gives these seats to VIPs (Ansel Elgort was in business class on my flight Saturday night). However, on off-peak days/times, lots of these seats can go unsold — leading to upgrades for AA elites. Sadly though, we can only get the bump from economy to business class with 500-mile upgrades. You have to use a systemwide upgrade to go from business to first class on these routes.

While the A321T upgrade has been excellent in the air since its launch in 2014, the experience is even better now if your upgrade clears in advance. Business-class passengers — whether paid or upgraded — get access to AA's Flagship Lounges. If you're departing New York, you can check out the excellent Flagship Lounge at JFK, and a Flagship Lounge at LAX should be open by the end of 2017.

There is a third route that provides similarly excellent upgrades: AA's three-class 777-300ER (77W) between Miami (MIA) and Los Angeles (LAX). However, this aircraft is currently suspended on this route, and until the 77W returns to MIA-LAX, JFK-LAX and JFK-SFO are the best routes for these top-notch upgrades.

Have you gotten upgraded into AA's A321T business class? Share the details in the comments below.

Our points-obsessed staff uses a plethora of credit cards on a daily basis. If anyone on our team wouldn’t recommend it to a friend or a family member, we wouldn’t recommend it on The Points Guy either. Our opinions are our own, and have not been reviewed, approved, or endorsed by our advertising partners.
See all best card offers
Related stories
Guide
Loyal to Costco and own a business? Costco Anywhere Visa Business Card review
News
American, JetBlue add 11 new routes as part of expanded Northeast Alliance
News
5 signs you have too many credit cards
News
1st impressions of MSC Seascape: 9 things I liked and didn't like about MSC's 4th Seaside-class ship