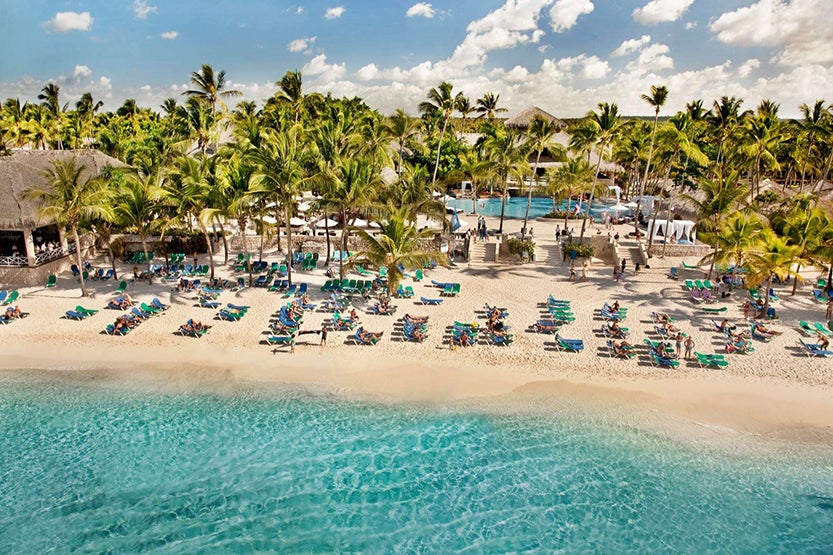 TPG Staff's Dream Caribbean Vacations on Points and Miles
This post contains references to products from one or more of our advertisers. We may receive compensation when you click on links to those products. Terms apply to the offers listed on this page. For an explanation of our Advertising Policy, visit this page.

The Caribbean has had a escaped the hurricanes unscathed and, with tourism a large source of income in the area, are ready to welcome visitors back. Today TPG staffers and contributors are sharing our ideal award itineraries to the islands — from Aruba to St. Kitts.

A Premium-Class Getaway to Aruba

I'm dying to use my TrueBlue points to fly Mint from JFK to AUA. On scattered days throughout the winter, JetBlue offers one-way Mint flights for $298, or about 20,000 TrueBlue points. Then, for getting home, I'd probably fly economy on a weekday. With Mint, half the fun is getting there so I wouldn't be so concerned about the economy level of comfort on my way home.

I have enough TrueBlue points in my account, but I've been eyeing the JetBlue Plus Card to replenish my account for when I redeem for that award. I've flown Mint once on a transcon route, and now I'm hooked. — Emily McNutt, Associate Editor

As a family traveler, I would stay at one of the two all-inclusive Wyndham resorts in the Dominican Republic, either the Viva Wyndham Dominicus Beach or the Viva Wyndham Dominicus Palace. I've been saving all of the points I receive from the Wyndham Rewards Visa Signature Card, which currently offers 15,000 points as a sign-up bonus after your first purchase, and another 15,000 after spending $1,000 within 90 days of account opening. It also offers 5x points for Wyndham purchases, 2x points on gas, utility and grocery store purchases and 1 point per dollar on everything else. Best of all, you only need 15,000 points to stay at any Wyndham hotel, resort or vacation ownership property, even all-inclusive resorts like these.

To get there, I'd fly into Punta Cana Airport on Southwest, which offers non-stop service from Atlanta, Baltimore, Chicago-Midway and Fort Lauderdale. Both my wife and I have the Companion Pass, so two of our kids would be free, and we would be also able to check far more bags than we would ever need, for free. Basically, the entire vacation would cost us just the taxes and fees on the airline tickets, and the price of the airport transfers. I don't see how you can beat that! — Jason Steele, Senior Points & Miles Contributor

A Pseudo-Caribbean Jaunt to Bermuda

While it's technically not in the Caribbean, Bermuda is my favorite nearby island destination, hands down. It's a mere 90 minutes from New York City, and flights are consistently inexpensive — we're talking well under $300 round-trip, even after the significant taxes. Considering how low the paid fares can be, this isn't a great opportunity to redeem frequent flyer miles, but it could certainly make sense to redeem transferrable points through your credit card's portal, such as Citi ThankYou or Chase Ultimate Rewards.

The same goes for hotels, I'm afraid. At the moment, Fairmont is the only chain with a loyalty program with a presence on the island, but a St. Regis is on the way, with a targeted opening in 2020. For now, the same strategy above applies here — if you don't want to pay cash, consider redeeming transferrable points at a fixed rate toward a paid hotel stay. You could also redeem frequent flyer miles for a hotel room if you must, but expect to leave a ton of value on the table in the process. — Zach Honig, Editor-at-Large

Being based in South Florida, traveling to the Caribbean is relatively easy given American's hub in Miami and JetBlue's hub in Fort Lauderdale. One in particular is made possible through Ultimate Rewards and two of the program's transfer partners, and it's one I'm planning for next year to celebrate my 10-year wedding anniversary: St Kitts. American offers nonstop flights from Miami that are readily bookable as economy award tickets for 20,000 British Airways Avios round-trip. I'm also dying to check out the new Park Hyatt St. Kitts at 30,000 points per night. A large portion of these costs will come from my soon-to-be-earned sign-up bonus on the Chase Sapphire Reserve, though I also have a large stash of points from everyday spending on the Ink Business Cash Credit Card, Chase Freedom (No longer open to new applicants) and Chase Freedom Unlimited (my perfect Chase quartet of cards). I'd also use the Reserve to book my rental car and ensure that I have primary coverage.

We're thinking of spending 2-3 nights at the Park Hyatt and then another 2-3 at the Four Seasons Nevis booked through Amex Fine Hotels & Resorts courtesy of my Platinum Card from American Express. This will allow us to experience both St. Kitts and Nevis (we're especially excited to explore Alexander Hamilton's birthplace, as we're obsessed with the musical!). Depending on the time, we may also sneak in a couple of nights at the Marriott on St. Kitts, which has reasonable revenue rates. Given my SPG Gold status from the Amex Platinum (and the matched Marriott Gold it provides), we'd hopefully have an enhanced on-property experience there. — Nick Ewen, Senior Points & Miles Contributor

Southwest Airlines recently began flying to Grand Cayman (GCM) from Fort Lauderdale (FLL). Because of my Companion Pass for my son and daughter under 2, my family of four including my wife only have to book two tickets with Rapid Rewards points to get to the Caribbean. The Grand Cayman Marriott Beach Resort is a Category 9 property requiring 390,000 Marriott points for a seven-night stay and 120,000 Southwest Rapid Rewards to partially use for the Southwest tickets to fly to GCM.

After a week in Grand Cayman right in the mix of 7 Mile Beach at the Marriott, I'd take the once-weekly British Airways fifth-freedom route nonstop from Grand Cayman to Nassau. For 4,000 Avios and $27 per adult (10% for children under 2) you can book the often forgotten route and avoid typical expensive intra-Caribbean revenue tickets. In Nassau, I'd use 20,000 World of Hyatt points per night to book the newly opened Grand Hyatt Baha Mar and use a Globalist Suite upgrade once the property (which is still in a soft opening) makes the suites available. Southwest Rapid Rewards left from our Marriott Hotel + Air package again get us back home via an easy connection in Fort Lauderdale. — Richard Kerr, Senior Points & Miles Contributor

Hyatt Points and Avios to the Rescue

Since the Park Hyatt St. Kitts just opened, I'd use my still-unused free night certificates [note: this sign-up bonus is no longer available] from recently opening the Hyatt Credit Card to book two nights at the new property. Since I'm expecting to like the resort so much, I have a balance of 20,000 Hyatt points in my account, so I'd transfer another 40,000 from my Ultimate Rewards account so I could extend my stay by another two nights.

Since getting to St. Kitts from NYC isn't exactly cheap, I'd break the trip into two parts: NYC to Miami, and then Miami to St. Kitts. I'd likely purchase a ticket to MIA, as paid fares from NYC are usually cheap, and then I'd take advantage of British Airways' distance-based award chart to get myself onto the island. — Nick Ellis, Assistant Editor