Meet the Couple Who Got Married in the Nashville Admirals Club

Articles
Emily McNutt is The Points Guy's Global News Editor and is based in London.
Follow
Nov. 17, 2017
•
7 min read 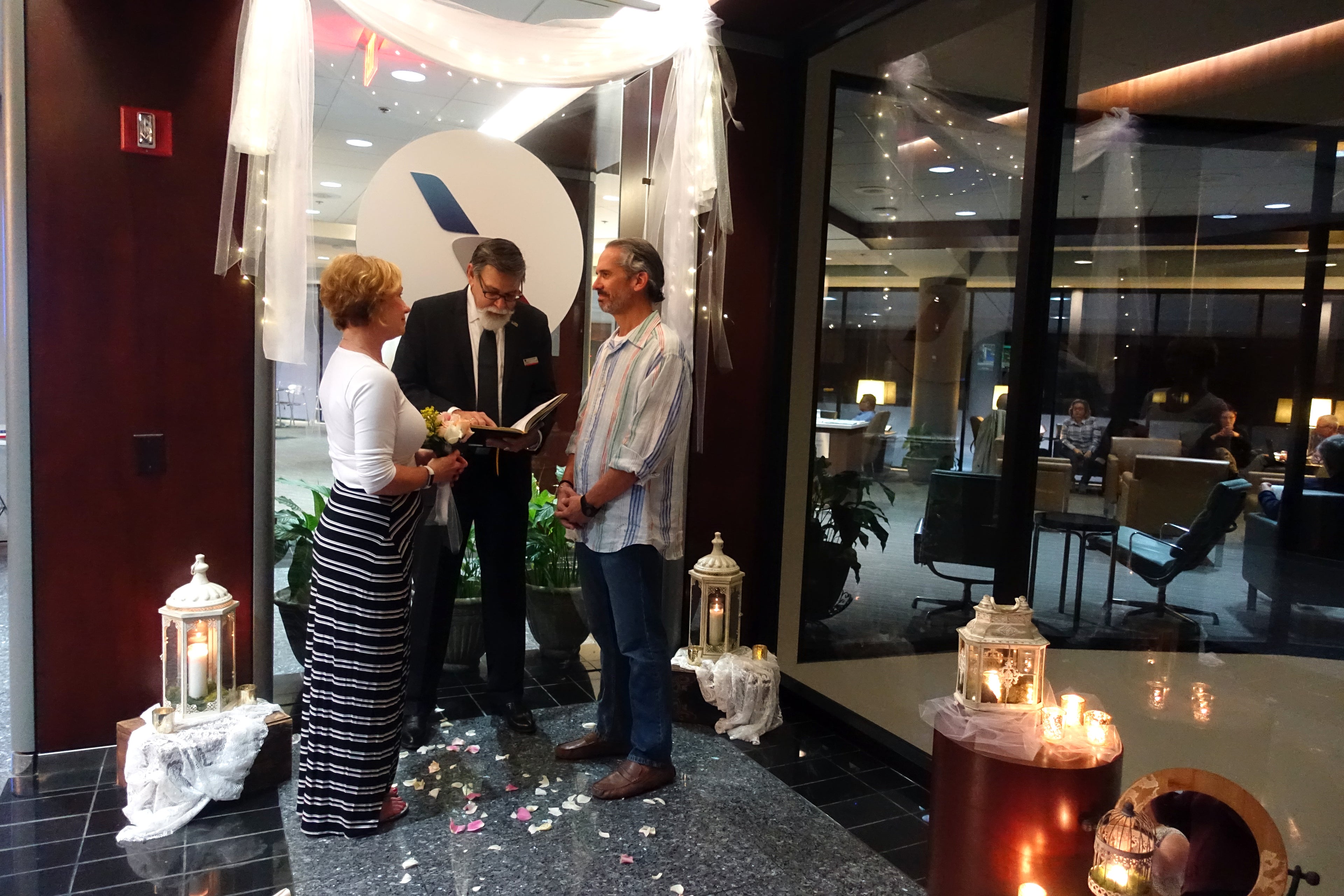 Meet the Couple Who Got Married in the Nashville Admirals Club
This post contains references to products from one or more of our advertisers. We may receive compensation when you click on links to those products. Terms apply to the offers listed on this page. For an explanation of our Advertising Policy, visit this page.

This is the first installment of an ongoing TPG series, "Love Is (35,000 feet) in the Air." Stay tuned for more stories on how points and miles have helped to merge travel and love.

The BNA Admirals Club is a regular spot for the couple — who didn't want a traditional wedding — and one where the employees felt like family. All the more reason why the two chose to say their "I dos" in front of a few American Airlines employees in a place that brought them together in the first place.

When the couple began dating, Julie was based in Dallas (DFW), and Vince in Huntsville, Alabama (HSV). Thanks to her frequent work travel and trips to visit Vince — occasionally in Nashville — Julie racked up enough miles to qualify for American's Executive Platinum status. Vince, also a frequent traveler, has earned Gold status with American.

After two years of doing the long-distance thing, the couple decided to move to Nashville. But, thanks to busy work schedules, the two continued to make their way through BNA regularly — and, subsequently through the airport's Admirals Club.

When it came for time for their big day, the decision to get hitched in front of their Nashville family — the people they see so frequently at the Admirals Club — was an easy one.

"This is home," Julie said. "The people here at the lounge are so incredibly friendly — they feel like family."

The decision was made even easier — and a date chosen — when Vince and Julie were traveling through the BNA Admirals Club and overheard one of their favorite agents talking about officiating another agent's wedding.

That's when Julie and Vince — somewhat jokingly — asked the agent, Terrell Kohn, if he would marry them, too. He answered "Yes."

Knowing they were heading to Cancun just three days later for a friend's wedding, Julie and Vince followed up with Kohn and asked if they would be able to have the wedding in the Club the morning before their flight. The employees got to planning on short notice.

The couple's wedding day got off to a shaky start. They were set to wed before hopping on a flight to Dallas (DFW) and continuing on to Cancun (CUN), but around 2:00am Julie and Vince received a phone call that their flight to DFW was delayed. Instead, they were placed on a flight that departed at 6:01am CT.

Distraught, Julie began texting Kohn and Kelly Lavender, the lounge's manager. Like family does, they pulled through by moving the wedding up one hour to 5:00am. Some of the Admirals Club staff came in as early as 4:00am for their shift. Others who were friends of the Bonettis even came in on their day off for the event.

The AA team transformed the Admirals Club into a dream wedding venue for the road warrior couple. One employee brought in homemade cupcakes for the celebration, and another made handcrafted table decorations.

When it was time for the ceremony to start, Julie made her way down in one of the lounge's two elevators. As a lounge attendant began playing "Here Comes the Bride," Julie, dressed in a long skirt and white shirt with a small bouquet of colorful flowers, ascended up the club's spiral staircase, which was covered in rose petals. At the top of the staircase, Vince, wearing jeans and a striped button-down shirt, and Kohn were waiting for her.

The ceremony was quick but heartfelt. "I was pretty nervous reading the vows," Kohn said. "Because I threw the vows together for them last minute. And then again, when everything changed this morning."

Once the couple said their "I dos," a small group of Admirals Club family members were there to applaud — and dab a few tears from their eyes.

After the Bonetti's first kiss as husband and wife, it was time to celebrate with Champagne and wedding cake. But only briefly — they had a flight to catch, after all.

Lavender sent the Bonettis on their way with a gift bag: guitar glasses that light up, BNA-branded hats and two American Airlines mugs, engraved with their names and wedding date. After all was said and done, Julie was the one in tears.

The AA team escorted the newly married couple back down the rose petal-covered stairs and to their gate where the attendant congratulated them once more before allowing them to board first. Those in the gate area gave the newlyweds a round of applause.

But that wasn't all that AA had in store for them. Upon the Bonettis arrival in Dallas, they were greeted by the carrier's Cadillac ramp transfer service and taken to the international first class lounge for breakfast where they were again greeted with more cake and Champagne.

While neither Julie nor Vince foresee their work travel schedules slowing down, the two say they will have a hard time topping the experience on future Admirals Club visits. The good news is since they both have the Citi / AAdvantage Executive World Elite Mastercard, they have access to the lounge regardless of whether they're traveling together or on their own.

Now, the fun begins planning a true honeymoon next March to Italy in an AA premium cabin, putting their miles to good use. Until then, they'll continue to be regulars at the BNA Admirals Club lounge — with their AA family by their side.

*Correction: This story has been updated to show that the Bonetti's original flight was delayed, not canceled.

Related stories
11 of the most scenic train rides on Earth
Marriott Bonvoy Bold credit card review: Earn 60,000 bonus points with no annual fee
Sweet Spot Sunday: Booking low-cost flights to and around Canada with Aeroplan
Use IHG Rewards Dine and Earn to earn extra points for your next vacation