Here's The First A350-1000 for Launch Customer Qatar Airways 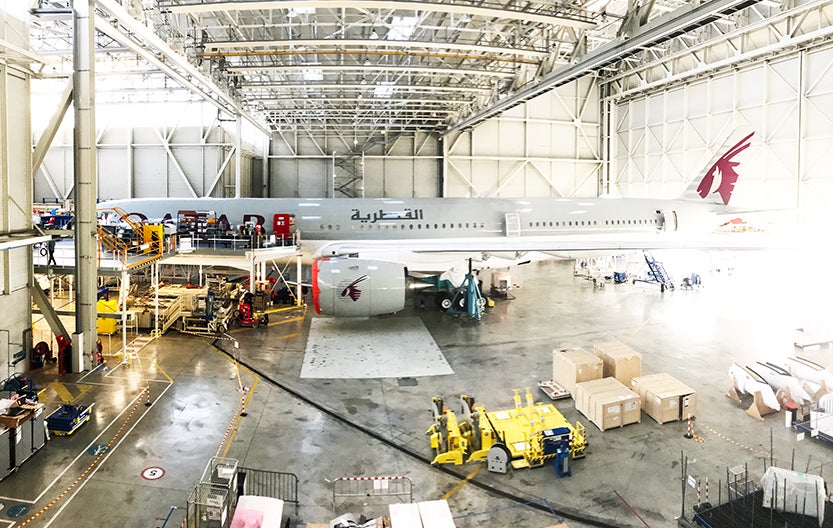 Here's The First A350-1000 for Launch Customer Qatar Airways
This post contains references to products from one or more of our advertisers. We may receive compensation when you click on links to those products. Terms apply to the offers listed on this page. For an explanation of our Advertising Policy, visit this page.

The latest variant of the A350, the A350-1000, is preparing to enter commercial service, almost a year since it first took to the skies.

Fast forward to this week at Airbus HQ in Toulouse, when I joined the launch customer for Airbus' latest product, Qatar Airways to take an exclusive first look at the first A350-1000 jet that will soon enter commercial service, already wearing Qatar's Oryx livery. The Doha-based airline was also the first operator of the shorter A350-900. The A350-1000 will enter service with QSuites, Qatar's new and much-admired business class (here's how to search and book it using miles.)

In terms of aligning the jet against the competition, its direct competitor is Boeing's existing 777-300ER, and possibly future 777 models in the near future, such as the 777-9. The 1000 would typically seat around 350 passengers, or 50 more than the 900 model.

Here's a video showing the aircraft in the hangar:

The aircraft is currently undergoing the final stages of cabin installation and integration, as well as cockpit fitting. The A350-900 and A350-1000 aircraft share the same type rating, meaning pilots trained on one variant are also able to fly the other. In addition to this, 95% of the onboard systems are exactly the same.

Furthermore, A350-1000 wings have an extended trailing edge (meaning the wings are around 4% larger, with slight alterations to ailerons and flaps) making the jet heavier overall, but enabling it to have a lower approach speed.

In addition to this, A350-1000 features a new six-wheel main landing gear, to better support the added weight of the new jet. That's an easy visual cue to distinguish it from the -900, which has four wheels, not six. It also means touchdowns should be a little smoother, with the weight distributed on more wheels.

At the current stage of cabin fit, all cabin elements such as lavatories, doors and closets are installed, and this aircraft has already been fitted with Qatar's QSuite Business Class cabin — which we think is the best business class in the skies at the moment. You can see the IFE tests taking place on QSuite seats through the windows here:

The aircraft will feature 46 Qsuites and 281 economy seats. QSuites will include 22 forward-facing and 26 rear-facing business class suites, with the middle suites able to convert to six double beds, and six quad suites.

The signature A350 "sunglasses" around the cockpit have been applied in the image below, as the aircraft prepares to begin test flights.

And here's a little sneak peek at the welcome panel, situated at Door 2 of the aircraft. Unfortunately, photographing the details of the cabin further than this point was not allowed.

While preparation for Qatar's first A350-1000 continues, the A350-1000 as an aircraft type is awaiting the necessary type certification from the European Aviation Safety Agency (EASA).

Airbus told me that the certification process is in the "final paperwork stage" and the company expects full certification of the A350-1000 to be granted by EASA by the end of November.

With the certification on track, and the cabin fit well underway — the A350-1000 will soon be entering the world of commercial flights. As it marks a milestone in the aviation world, the team in Toulouse and myself decided to test the PA system for Qatar's latest jet....

Airbus has sold 37 A350-1000s to Qatar Airways, making them the largest operator, for now. Sales of the second-biggest Airbus airplane behind the A380 have been slow, with the -900 model faring much better.