‘The Geeks Stay on Board’: Brussels Airlines Puts on An AvGeek Party for the Last Avro RJ

Articles
Alberto Riva Alberto runs our flight reviews and oversees special projects across several verticals. Previously, he was the managing editor of Vice News and worked at Bloomberg and CNN, where he was constantly trying to convince people to do more stories about airplanes. He speaks Italian, French and Spanish and one day he’ll be better at German.
Follow
Oct. 30, 2017
•
7 min read 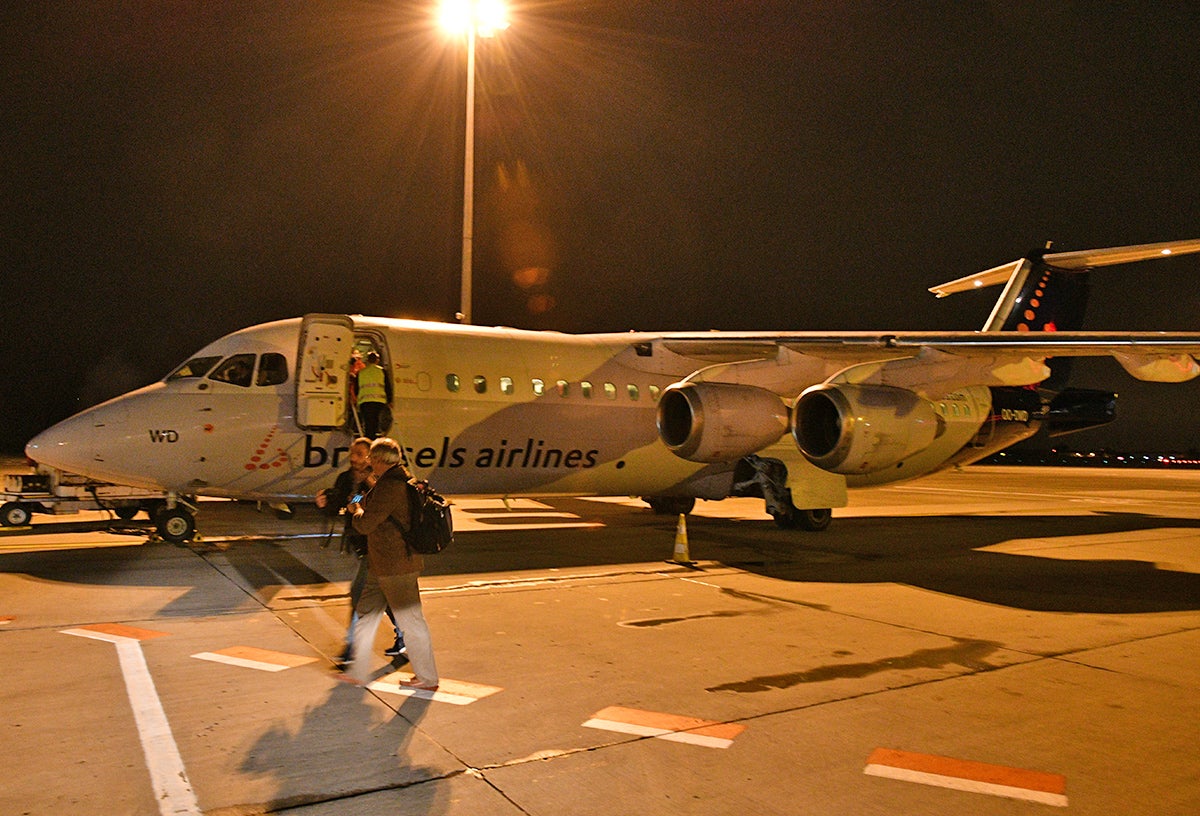 ‘The Geeks Stay on Board’: Brussels Airlines Puts on An AvGeek Party for the Last Avro RJ
This post contains references to products from one or more of our advertisers. We may receive compensation when you click on links to those products. Terms apply to the offers listed on this page. For an explanation of our Advertising Policy, visit this page.

“Welcome aboard this last flight,” the Brussels Airlines flight attendant said on the intercom, before her safety briefing. “It’s a historical flight for this airplane, and for the airline.” We were on the ground in Geneva, Switzerland, last Saturday, and the airplane being sent to its retirement with a farewell flight to Brussels was quite a rare bird: the Avro RJ100, the only four-engined regional jet ever made. The last commercial jet produced in Great Britain, the 1980s-vintage Avro is a big magnet for aviation enthusiasts, and its last flight for Brussels Airlines turned out to be a major AvGeek event.

The Avro hasn’t quite disappeared yet — it still flies for a handful of airlines, none of which are based in North America — but it’s now been retired by every major European and US carrier, except some left flying for the regional arm of Air France. In an era when even ocean-crossing jetliners have only two engines, finding four of them on short-haul flights is a delightful anachronism if you're an AvGeek — or an utter insanity if you're an airline’s finance department. TPG could not miss the ceremonies planned around its last flight for a major airline.

Saturday wasn’t a day to count how much more expensive than a modern Bombardier C-Series or Embraer 190 our plane was. It was a day to geek out over its history and beauty, and the young man seated next to me at the window in row 14 was as big a fan as they come: Simon Roth, a 17-year old Swiss student who goes by the handle avro.lover on Instagram and had come on flight SN2720 with two equally enthusiastic friends.

As we talked, a smooth, powerful takeoff roll reminded us that the Avro — which started life in 1981 as the British Aerospace 146 — is still, even at its age, a remarkable aircraft: roomy for a regional jet, extremely quiet for its time, and known for its power and ruggedness.

It didn't take long after that for the AvGeeks on board to start mingling and trade Avro stories. For me, this was the first (and probably also last) time aboard the little British jet, but I could understand why it had such a magnetic allure for aviation lovers. It looks like nothing else. You board through built-in stairs that retract into the fuselage, you look at the wing mounted above it, and you get to feel the power of four turbofans.

(Incidentally, since I got delayed and got to the plane after everybody else, I was the last passenger to board a Brussels Airlines Avro RJ.)

Inside, it's a no-frills, simple cabin in a 3-2 seat arrangement that throws you back to another time — an era when people smoked on board airplanes, as I could tell from the ashtrays in the armrests. That charm was probably lost on the passengers who just wanted to go to Brussels and were unaware they had booked a seat on a coveted last ride. "You mean this is a special flight? And you've come all the way from New York for it?" a woman seated behind me asked incredulously while I was chatting with a Belgian friend I regularly bump into on unusual, AvGeeky flights.

(I wonder what she would have said had I told her that I met that Belgian friend, a municipal-government employee from Bruges named Maarten van den Driessche who helps run an aviation news site in his spare time, while doing something way more intense than a mere hop across the Atlantic. I was circumnavigating the world in an attempt to fly on the last Douglas DC-10 in service, and met Maarten when we both got delayed in Dhaka, Bangladesh.)

But while other passengers might be surprised, airlines have embraced the AvGeek culture, happily hashtagging social media posts with #avgeek and treating enthusiasts like the brand ambassadors they can be. Flight SN2720 was no exception, with Brussels Airlines sending its vice president of media relations, Geert Sciot, on the plane. And on such a short flight — just one hour — there would be normally be no free food or drink service, but for this occasion SN brought out the Champagne.

AvGeeks occupied about 20 out of around 100 seats, and were easily recognizable from their cameras. It's mostly a male pastime, and sure enough, on SN2720 it was all dudes — an (informal) brotherhood, of sorts, with members showing up from Belgium, Switzerland, the US, Italy and elsewhere. Every passenger — not just those who had come expressly for the Avro — got a commemorative card, a branded key ring and chocolates, another indication that airlines have learned to harness the PR potential of AvGeek events.

As our Avro, a 1998 model registered OO-DWD, began descending toward Brussels' Zaventem airport (BRU), Sciot took the intercom for an announcement that didn't sound like what most passengers are used to hearing: “A special announcement for those who would like to take pictures of the cockpit and aircraft,” he said. "After the other passengers disembark, the geeks stay on board.”

And that's just what happened. Captains Sven Peeters and Ben Teugels — on big occasions, airlines often trot out their most experienced fliers, instead of the usual captain plus first officer flight crew — landed the last Avro at BRU around 7.30pm local time, to a round of resounding applause. After the normal passengers ran to get home or to make their connections, Sciot handed out more chocolates, and the two dozen camera-wielding AvGeeks queued up to photograph the flight deck.

By today's standards, it's a fairly old-school affair — a mix of the dials of classic cockpits with some digital instruments. Situated in the middle and numbered for engines one to four, the throttle levers were enough to make an AvGeek's heart sing.

I had spent just one hour with the little Avro, but I was a convert; what a strange and beautiful machine it was! I could understand the fascination it exerted on fellow AvGeeks like Ivan Coninx, a Brussels-based comptroller for the airport-handling company Swissport, who almost waxed poetic when recalling full-power takeoffs from the short runway at Stockholm's Bromma (BMA) airport. With the brakes barely holding against the four engines at maximum thrust, the Avro would jump like a racehorse out of the gate, pinning passengers against their seats — a reminder that the quiet aircraft we fly without a second thought are capable of far more than we usually see.

I, the last to board, was also the last one to leave; in fact, just as I lingered for another photo, Sciot told me to hurry and get on the bus. As for “dear old Delta Whiskey Delta,” as Coninx had called her: She would probably go on to more years of flying, like other Avros have after being sold by Western airlines, with an operator in Africa or South America. One more proof that, sometimes, old aircraft never die.

Related stories
Use these shopping portal bonuses to earn extra miles this holiday season
Using miles and points to book airline tickets and hotels for others
Maui magnificence: A review of Kaanapali Alii, a Destination by Hyatt Residence
Target’s big annual gift card sale is this weekend
Featured image by Alberto Riva