Why Can't I Select Any of My Flight's Window or Aisle Seats? 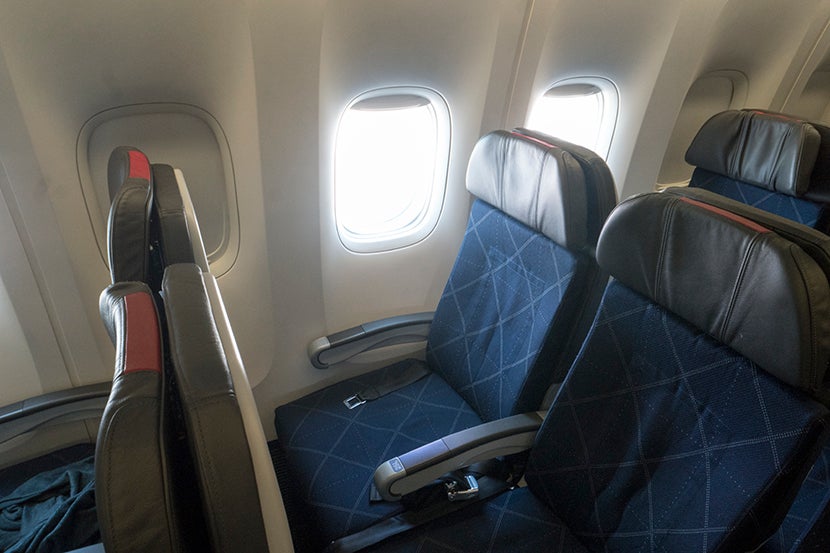 Why Can't I Select Any of My Flight's Window or Aisle Seats?
This post contains references to products from one or more of our advertisers. We may receive compensation when you click on links to those products. Terms apply to the offers listed on this page. For an explanation of our Advertising Policy, visit this page.

If you're not a fan of Southwest's boarding procedure in which passengers pick their seats on a first come, first served basis, you might presume that buying a ticket on American, Delta and United will at least allow you to preselect the seat you want. But TPG reader Karthik notes that doesn't necessarily appear to be the case...

[pullquote source="TPG Reader Karthik"]When I logged into AA's website to choose seats on my flight from New York to San Francisco, the only available seats in economy were middle seats. There were a lot of premium economy seats for additional costs wide open — is it possible that AA is intentionally blocking window and aisle seats?[/pullquote]

Airlines have spent the last several years refining the art of the ancillary fee, in which customers pay extra for additional services on top of the basic airfare. US carriers have earned billions of extra revenue using this technique, and one of the major drivers of that increase — aside from baggage and change fees — is seat selection fees.

But of course, the airlines know that the only way to make customers pay more for a better seat is to block the best ones from being selected for free. And over time, that technique has expanded to include blocking not just the "best" seats, but practically every non-middle seat in the entire cabin.

Let's take a look at the American route that Karthik booked from New York (JFK) to San Francisco (SFO). Here's the current seat map for one AA flight on that route for a date in mid-January:

Sure enough, the only window and aisle seats that appear to be available are the ones that cost extra. And not just a little bit extra — you'll pay at least $66 for the privilege on just the one-way flight.

But how do we know that all those free window and aisle seats haven't already just been snapped up by other passengers? Well, this is actually where a little bit of elite status can come in handy. Because even when the airlines block window and aisle seats, they release them to their elites.

So when we look at that exact same flight but signed into aa.com as an Executive Platinum elite, suddenly the seat map looks like this...

By all means though, let's not pick solely on American here, because Delta and United do the same thing (though perhaps not to the same extent). Here's the seat map for a flight between New York (LGA) and Atlanta (ATL) on Delta for a passenger without elite status...

And here's that exact same flight, but now showing the seats available for free to Delta's elites...

You can see all the window and aisle seats that aren't available if you don't have elite status. To be completely fair to Delta, unlike American, it offers quite a few free aisle and window options further back in the aircraft, and even AA has more options when you're not flying on a transcontinental route like JFK-SFO, since the airline's A321T is configured so that first- and business-class seats essentially take up half the aircraft.

But the important point to keep in mind here is that those elite window and aisle seats might not all be taken before check-in, and when check-in occurs, sometimes those seats are released to everyone. It's also possible an agent at the airport will be able to place you in one of those blocked seats on the day of the flight, depending on how full it is.

So, Karthik, if you're having trouble finding a window or aisle seat, your options are to pay for a seat assignment or cross your fingers and hope you can get a window or aisle at check-in. Thanks for the question, and if you're a TPG reader who'd like us to answer a question of your own, tweet us at @thepointsguy, message us on Facebook or email us at info@thepointsguy.com.

Our points-obsessed staff uses a plethora of credit cards on a daily basis. If anyone on our team wouldn’t recommend it to a friend or a family member, we wouldn’t recommend it on The Points Guy either. Our opinions are our own, and have not been reviewed, approved, or endorsed by our advertising partners.
See all best card offers
Related stories
News
Turf war: Delta retaliates in Detroit with new transatlantic route
News
Cruise deal alert: This short-term gift card promotion can get you big discounts
News
Disney's Splash Mountain closing date announced, ride to be reimagined as Tiana's Bayou Adventure
News
Ending soon: Earn up to 80,000 AAdvantage miles with these Citi cards