How I Became an AvGeek in a Week: The Plane Spotting Holy Grail at SXM 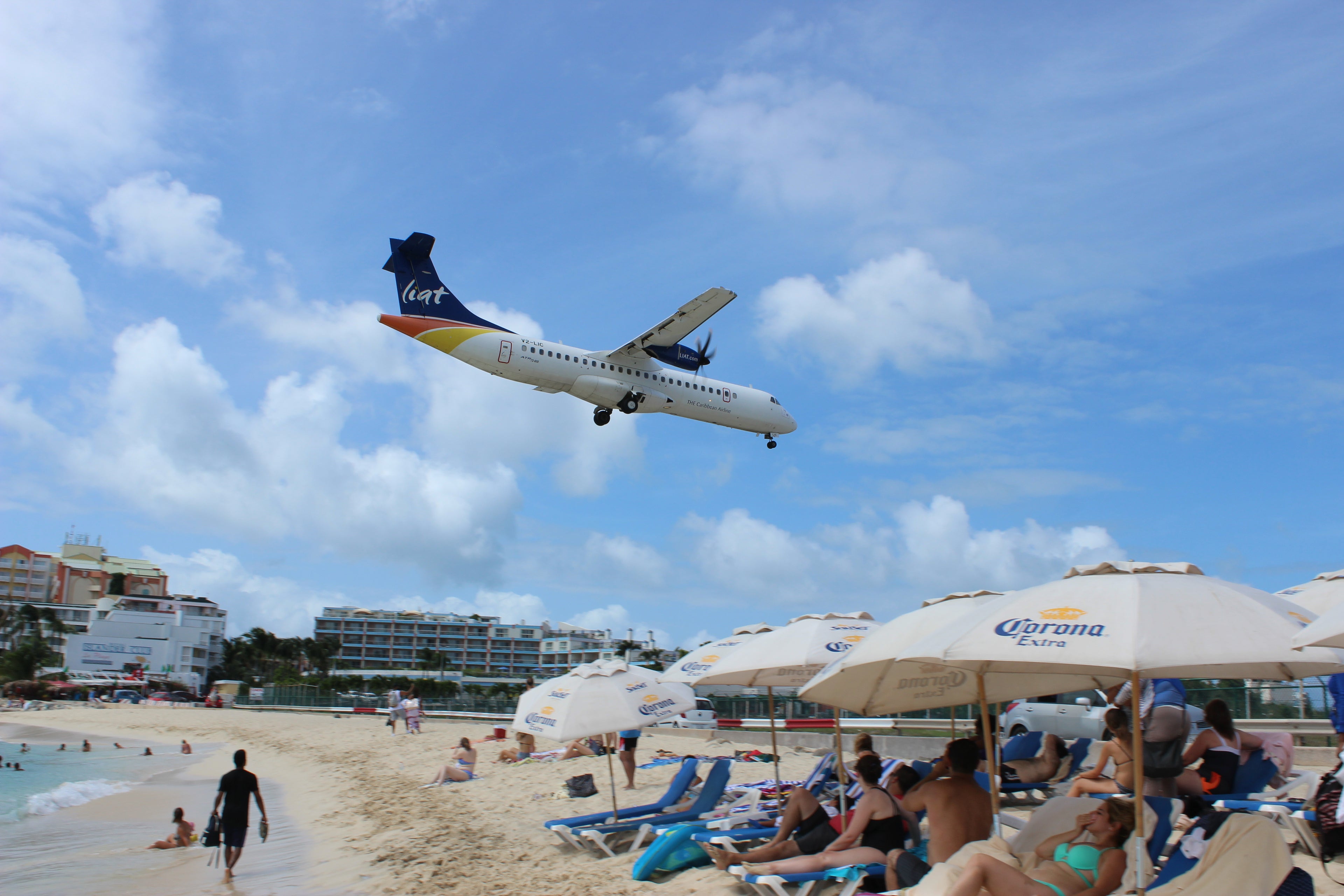 How I Became an AvGeek in a Week: The Plane Spotting Holy Grail at SXM
This post contains references to products from one or more of our advertisers. We may receive compensation when you click on links to those products. Terms apply to the offers listed on this page. For an explanation of our Advertising Policy, visit this page.

On the fourth day of my plane spotting adventure, I made it to the promised land. Well, okay, promised beach. Because of course we are talking about the place that stirs the emotions of anybody on the planet who's ever called themselves an AvGeek: Maho Beach, the ultra-famous spotting location on the Caribbean island of St Maarten.

I arrived at the start of August, a month before Hurricane Irma wreaked havoc and destruction on both Dutch and French sides. The island, half Dutch and half French, is devastated. Maho literally is no more, and the island has far more pressing concerns to attend to than how to get close to airplanes.

Editor's Note: The remainder of the article was written before Hurricane Irma struck St Maarten. It has been left as it was written at the time to preserve a memory of the island before the natural disaster.

Strawberry daiquiris on a sun-soaked beach, blue Caribbean water lapping at your feet. Sounds like a dream vacation, right? Now throw in the occasional roar of a passenger jet descending just over your head, and you’ve got yourself St Maarten’s Maho Beach: A plane spotters’ paradise. I was nearing the end of my weeklong crash course in plane spotting, after getting my first taste in San Francisco, seeing the big boys at LAX and hopping back eastward for a lesson in smaller-plane spotting at Washington National.

Across the AvGeek community, Maho Beach has long been a must-see destination. Spotters come to watch planes land at Princess Juliana International Airport’s (SXM) Runway 10, St Maarten's only landing strip, located on the Dutch side of the island. There is also a tiny airport on the French side, Grand Case - Esperance (SFG), but no one really comes here to see that. The attraction is SXM. You may call it Sint Maarten, in Dutch, or Saint Martin, in French, but it doesn't really matter: no AvGeek refers to this island in writing by anything other than its airport code.

Only a spit of grass, the narrow Beacon Hill Road and some beach separate the start of Runway 10 from the end of Maho Bay. This makes for some absolutely crazy waterside plane-spotting on the adjacent Maho Beach.

As my flight from Miami began its final descent into SXM on an early August Monday, I did a mental review of the final planned leg in this AvGeek adventure. Pass through customs. Get to Alegria hotel. Find bed. Sleep for first time in more than a day. Wake up. Stumble to world-famous (to plane-spotters, at least) Sunset Beach Bar and Grill. Then I'd go into autopilot, and photograph passing planes until either my memory card, my battery or my attention span ran dry.

But when I sat down to plane-spot the the following morning, I encountered a threat even more existential than those: condensation. During the two-minute trek from the Alegria’s ultra-air-conditoned lobby to the sticky hot Sunset bar, temperature and humidity had conspired to blot my lens in a thick cloud of white. I should have realized that this problem wasn’t permanent, but the humid heat was clearly messing with my tired brain, because my first thought was that I was screwed.

Still, science did what science does, and after about 20 minutes the cloud cramping my camera and my mood had lifted. And while my first photos at SXM won’t win any awards, hopefully this tip I should have known beforehand will give yours a fighting chance: store your camera in a Ziploc bag before going from air conditioning to tropical heat (and vice versa.) This will give the temperature of the camera a chance to catch up and will probably spare you the condensation-based mini-freakout I had.

Over more than 6 hours jumping between Sunset bar and Maho Beach I saw a good variety of aircraft soar almost uncomfortably close to the top of my head. For Boeing I saw a Delta 757, a Copa Airlines 737, and KLM 757; from Airbus I spotted an Air France A340, an American Airlines A319. Maho Beach also had no shortage of wild cards that I could only ID by registration number: There was a tastefully liveried ATR-72 from Liat; a stubby-looking Shorts SD3-60 that looked like a boneyard escapee; and enough island hoppers to mount a formidable aerial invasion.

Paired with a constant stream of overpriced but under-boozed strawberry daiquiris and my primo perch beside runway 10, I had quite a day. I even saw planes I would never have seen otherwise. Where else can one get this close to a weird, ungainly British-made turboprop like the Shorts in the image below?

Yet I must say that from a spotting consistency perspective, Maho Beach isn’t too great. Don’t expect air traffic levels anything like those at most US hubs — planes and go at an infrequent pace, and there are often long gaps in between arrivals. Sunset Bar does have electronic arrivals and departures boards, but their timetables are horrifyingly inaccurate to say the least. And SXM can’t match the big plane variety many other airports tout. There are no jumbo jets or double deckers here — the last 747 flew out of SXM in October 2016.

But spotting at Maho Beach isn’t only about the spotting, as it was at every other destination on my trip. It’s also about being at the beach. I probably spent as much time goofing off on the beach and in the water as I did waiting for planes. During my beach breaks I would keep an eye to the sky, and if I saw a plane off in the distance I had more than enough time to run back to my chair and grab my camera.

Not everyone at Maho Beach is satisfied by watching these planes — some tourists have a boneheaded need to feel them as well. This used to mean hanging onto the fence for dear life as a blistering stream of engine exhaust at max power (it's a short runway, and jets need all the kick they can get) whooshes by your face. Fence-surfing, as some call it, is a dangerous game with potentially deadly consequences: in July a woman from New Zealand was killed after the blast force knocked her off the feet and into a concrete barrier.

During my day at the beach I didn’t see anybody fence surfing, perhaps because people were finally heeding the danger warning signs that have lined Beacon Hill since long before the July incident. But every time a jet rolled onto the runway for takeoff, a sizable group of beachgoers positioned themselves in blast zone range from the safety of the beach. Being the boneheaded college kid that I am, I couldn’t help but join the fun when the A340 that had arrived earlier lumbered into position.

As its engines revved up, a torrent of sand, wind and heat crashed over the beach. I only tolerated 5 seconds of their wrath before booking it to the water. A day of hardcore plane spotting at SXM had been more than enough excitement for me. The next day I would go to Miami, the last stop on my crazy intern project, before heading back to the TPG office and submitting to the critique of the seasoned aviation nuts on the staff. Had I become worthy of admission in the AvGeek fraternity? (It is, after all, a club of mostly guys.)

As I pondered those thoughts, the sand-blaster A340 took off and promptly banked to avoid the hills. It was headed away from the island, and in a few hours, I would follow suit.

Featured image by I spot the first and perhaps only ATR 72-600 of my life.

Our points-obsessed staff uses a plethora of credit cards on a daily basis. If anyone on our team wouldn’t recommend it to a friend or a family member, we wouldn’t recommend it on The Points Guy either. Our opinions are our own, and have not been reviewed, approved, or endorsed by our advertising partners.
See all best card offers
Related stories
News
7 reasons we're obsessed with Aruba's new family-friendly Embassy Suites Resort
Guide
The best increased card offers to sign up for this February
Deals
2-for-1 Valentine's Day sale on business class to France and Italy
News
Check your MileagePlus account: United starts depositing PQPs into Premier accounts