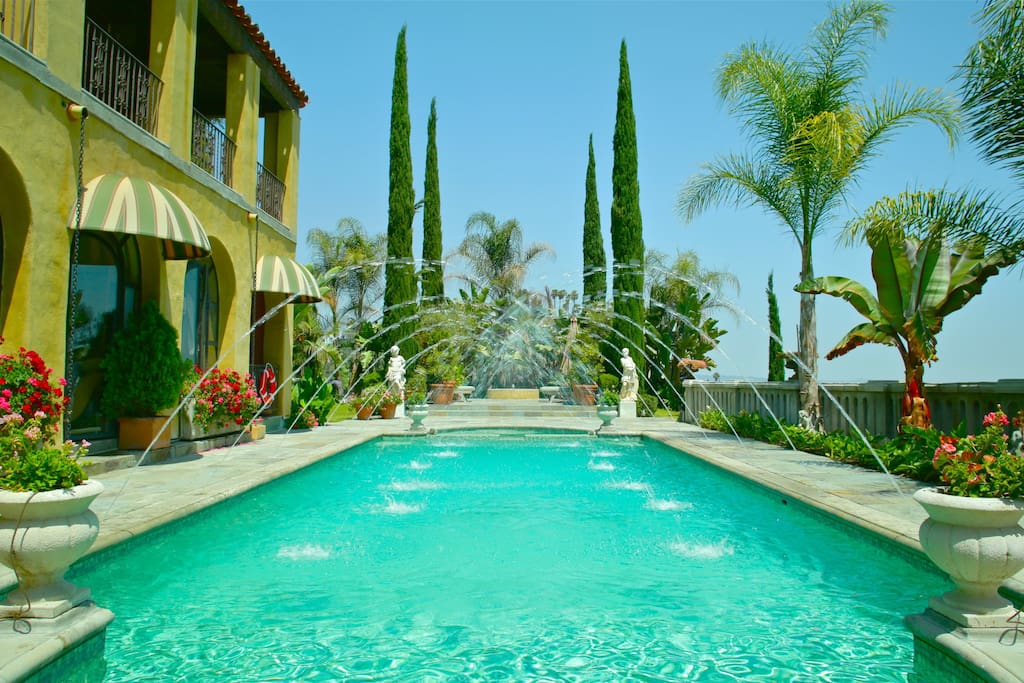 Game of Thrones fans might not be able to become the next Mrs. Jon Snow in real life, but here’s a decent consolation prize: for $811 per night, you and 13 of your closest friends can rent Lickleyhead Castle, the gorgeous childhood home of Rose Leslie, who played Kit Harington’s wildling love interest on the series — and who is now engaged to the actor in real life. If you’d like to spend a night inside the fictional world of one of your favorite movies or TV shows, Airbnb has got you covered there, too. Here are eight homes you’ve seen featured onscreen that you can spend the night in.

As seen in: Sherlock and Doctor Who

It takes a pretty special woman to catch the eye of consulting detective Sherlock Holmes (Benedict Cumberbatch) — and that woman just happens to be Irene Adler (Lara Pulver) a scheming dominatrix often referred to simply as “The Woman.” In “A Scandal in Belgravia,” a second season episode of Sherlock, the title character and his brother Mycroft are forced to take Irene down, and they do it in the classic confines of the Fields House, a six-bedroom “Victorian Gentleman’s residence” in Newport, South Wales, which accommodates up to 10 guests from $521 per night. Both the drawing room and master bedroom were featured in this particular episode of Sherlock — if the dining room looks familiar, that’s because it also appeared in the 2012 Doctor Who Christmas Special.

As seen in: Murder, She Wrote

Speaking of small-screen sleuths: writer Jessica Fletcher — played by the legendary Angela Lansbury — may have spent her free time solving crimes in the seemingly idyllic little town of Cabot Cove, Maine, but the images of that fictional town were actually shot on the other side of the country in Albion, California. Fans of the show will certainly recognize this historic two-bedroom cottage, which you can borrow to finish up your latest novel, solve a crime, pay tribute to Fletcher’s bad-assery or simply get away from it all. Prices start at $139 per night.

As seen in: Girls

If you found yourself in a state of real estate envy after seeing the brightly colored apartment building Shoshanna (Zosia Mamet) ended up calling home when she left New York for Tokyo in Girls, you’re in luck: you can book your own pad for just $197 per night. Located in Mitaka-Shi, in the western part of Tokyo, the apartments are not huge — they’re about 560 square feet, so best suited for just one or two people. But what they lack in size, they more than make up for in style; designed to serve as a work of art as much as a living space, the owners prefer that guests book stays of a week or more and recommend it as a great space for the creatively inclined, saying it’s a great place to hole up while working on your next book or film project.

As seen in: Extraordinary Measures

It may not have the same cachet as Corellia, Han Solo’s home planet, but Lake Oswego, Oregon, has got a pretty cool movie link to Harrison Ford, too: part of his 2010 movie Extraordinary Measures was filmed there. More specifically: it was filmed at this gorgeous, Hamptons-style estate that offers panoramic views of the lake, Mount Hood and downtown Portland. The home’s pedigree goes beyond movies, too; it’s been featured in Architectural Digest, The Wall Street Journal and The New York Times. While the $1,099 per night price tag might sound steep, make it a group outing — the home can sleep up to six — and you’re looking at a downright bargain.

As seen in: Entourage, The Real Housewives of Beverly Hills and The Bachelorette

Looking for an LA crash pad that will make you feel like part of the Hollywood A-list? The Villa Sophia is it — Los Angeles Weekly even named it “The Best Place to Pretend You're a Celebrity for a Day.” The property has been transporting guests to Italy without leaving California for years, including Ari Gold (Jeremy Piven) — the fictional, loudmouthed agent of HBO’s Entourage, who utilized the property’s guest house as a stand-in for the Amalfi Coast in the series’ final scene. Which explains why it’s known as the "Entourage" Honeymoon Spa Retreat on Airbnb, where it goes for a very reasonable $395 per night. The 750-square-foot guesthouse is like a little slice of paradise in the hills of Los Feliz. Reality TV fans might also recognize it from The Real Housewives of Beverly Hills or The Bachelorette.

As seen in: Definitely, Maybe; Solitary Man and Damages

Definitely, Maybe may not be Ryan Reynolds’ best-known movie, but if you want to live like the Deadpool star pre-Deadpool, this private room in a freestanding house in Brooklyn’s Ditmas Park neighborhood might just be as close as you get. The room, which is spacious and sunny, can accommodate up to two guests — there’s just one bed — and costs just $82 per night. Score! The same property opened up its doors to cameras for Solitary Man, the 2009 Brian Koppelman and David Levien film starring Michael Douglas, as well as the award-winning series Damages, with Glenn Close and Rose Byrne.

As seen in: Fixer Upper

While fans of the HGTV home improvement reality series Fixer Upper are lamenting that season five will be the reality series’ last, there's a bit of a silver lining: many of the homes that have benefited from the design skills of hosts Chip and Joanna Gaines are available to rent on Airbnb so fans can see some of their favorite makeovers in person. One great option: this spectacular mid-century modern home in Waco’s Mountain View neighborhood. The five-bedroom home sleeps between 10 and 12 people and is also available for larger parties. At $340 per night, it could make a great getaway — and sendoff for the series.

As seen in: Treehouse Masters

One of the great things about Airbnb is getting the chance to experience what it’s like to actually live in a truly unique home — like a treehouse. Clearly, there’s enough of an interest in that kind of abode that Animal Planet’s been running Treehouse Masters for nine seasons. If you’ve ever wanted to climb up and check one out, this beautiful and secluded one-bedroom treehouse makes a perfect couple’s getaway, and is just minutes from downtown Atlanta. Among the property’s many magical details are a drawbridge that lights up and a bed on wheels that, if the weather is right, will allow you to roll it right outside and truly sleep under the stars. Rates start at $375 per night.

Which of these are you most excited about? Sound off, below.

All photos courtesy of Airbnb.

Related stories
What are points and miles worth? TPG’s December 2022 monthly valuations
Capital One Venture X to lose Priority Pass restaurants and spa services as of Jan. 1, 2023
December 2022
Current Hyatt promotions: Bonus points on stays and dining plus double stay credits
Featured image by If it's good enough for Ari and Mrs. Ari, it's good enough for you.