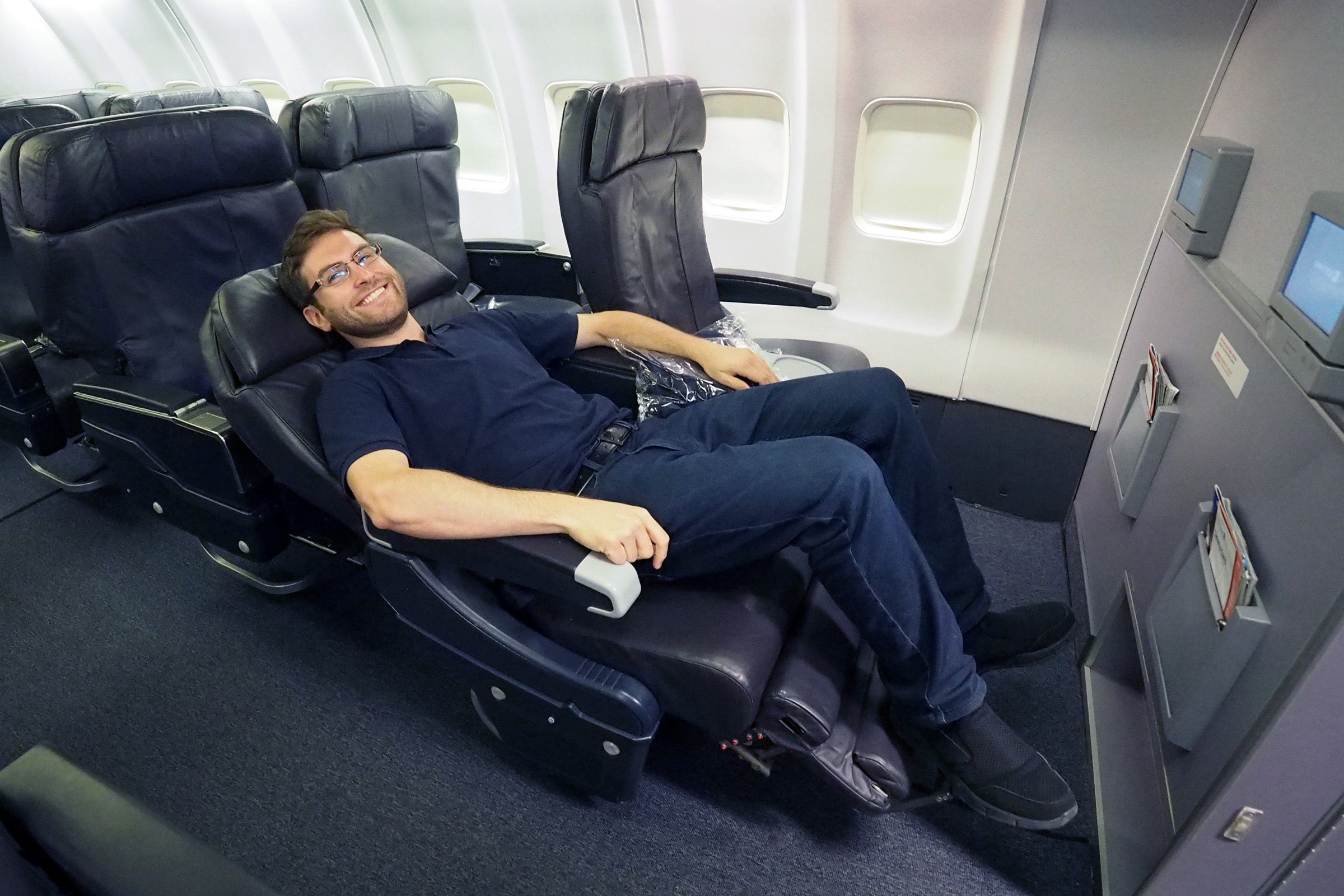 Now that we're more than halfway through 2017, we've asked several TPG staffers to share their progress toward elite status with a selection of airlines and
hotel chains. First, it's TPG Editor-in-Chief Zach Honig's turn to check in.

Earlier this year, TPG penned a post detailing his decision to "jump off the AA elite status hamster wheel." He's had top-tier status with all the US-based legacy carriers at one point or another, but most recently he's maintained Executive Platinum with American AAdvantage, a program I similarly have little interest in pursuing at the moment (as I'll explain below).

Instead, I'm focused on earning top-tier status with United Airlines and Starwood Preferred Guest, and perhaps a lower-tier status with some of the other chains. Scroll on down to see where I'm at so far for 2017.

As I mentioned, United MileagePlus is my priority at the moment, and, as of a couple weeks ago, I've actually already secured Premier 1K status through 2018 based on my travel this year. Let's take a look.

Earlier this month, I crossed a notable threshold with United's MileagePlus program, earning 1,000,000 Lifetime flight miles. That milestone makes me a "million miler," which confers some exceptional benefits with United (outlined in detail here), including mid-tier Gold elite status for life and the ability to share my current status — be it Gold or Global Services — with a companion.

While Gold status is fairly decent as far as perks go (including Economy Plus seating at booking, lounge access on international flights, free same-day changes and more), my goal over the last few years has been to earn Premier 1K status, specifically for the six Global Premier Upgrades (GPUs) that can be used to upgrade from economy to business or first class on any United-operated flight. While I've heard complaints from some customers that they struggle to have waitlisted GPUs "clear," I've had great success, primarily by identifying flights with confirmed upgrade availability using United Expert Mode.

While I had earned the requisite 100,000 Premier Qualifying Miles (PQMs) a few months back, I just hit the Premier Qualifying Dollar (PQD) requirement of $12,000, granting me 1K through January 2019. Going forward, I'll continue to earn two Regional Premier Upgrades (RPUs) for each 25,000 PQMs accrued, and two GPUs for every 50,000 PQMs credited to my account. I should hit a total of 200,000 PQMs this year, netting me 10 GPUs and 12 RPUs to use through January 2019.

I certainly never set out to earn status with American Airlines. While I was once an Executive Platinum member, the program's 2016 devaluation (paired with a general lack of low-level award availability) has left me with little to no interest in flying (and earning status) with American going forward. In fact, I've recently been focused on "burning" my AA miles — I'll keep a small balance for emergencies, but since this currency has become all but useless on the carrier's own flights, I have no reason to stockpile AAdvantage miles at the moment.

That said, I did have some flights that I decided to credit to AAdvantage earlier in the year, including one operated by AA. I'm also waiting for my Qatar Airways Qsuite flight to post to my AA account — I added my AAdvantage number before traveling but the miles were never credited automatically, and my request to have them manually added hasn't been processed yet. Assuming the flight does eventually appear, I'll have another 4,875 EQMs and $812 EQDs to work with for 2017.

As a result, I'm making some progress toward entry-level Gold status, but even if I'm only a few miles or dollars away from the mark come December 2017, I won't "mileage run" to take Gold home — I wouldn't object if I happen to make it with flights I'd be booking either way, but based on the perks I'd get (outlined here), Gold just isn't worth going even a little bit out of my way. If I end up with enough EQMs but fall short on the EQD front, I could, in theory, spend $25,000 to earn $3,000 EQDs with my Aviator Red card. But, uhh, yeah... I'm not going to do that.

While in-flight comfort is important to me, I usually end up spending many more hours in a hotel room than traveling to my destination on each trip, so having top-tier hotel status (and the perks that come with it) could end up making even more sense than earning status with an airline.

SPG has been my go-to program for quite a few years. I've accrued 500 nights since joining the program in 2007, and I've been a Platinum member for eight years. That means I have Lifetime Gold status with Starwood, and after two more years as a Platinum member, I'll have reached that lifetime tier as well.

So how am I doing toward meeting my Platinum requirements for 2017? Well, I'm close, but far enough away that I'm starting to worry about how I'll close the gap of 19 nights. I have both the Starwood Preferred Guest® Credit Card from American Express and the Starwood Preferred Guest® Business Credit Card from American Express, earning me a total of 10 night credits just from having the cards (five from each card). I then earned a total of 21 night credits from a mix of award and paid stays (including five glorious award nights at the St. Regis Maldives).

I'll likely return to that resort later this year (after scoring another fantastic redemption), and I have a short stay in Germany over Labor Day weekend, but I'm not yet sure where I'll make up the rest of the nights I need. If only I could count some of the nights credited to...

Starwood's new parent company still runs a loyalty program of its own, and even though you can transfer points back and forth, you can't yet pool your night credits. That means stays at hotels under the Starwood umbrella must be credited to SPG, while Marriott and Ritz-Carlton stays are credited to your Marriott (or Ritz-Carlton) Rewards account. That (partially) explains why I have 31 night credits with Starwood and 37 with Marriott, rather than 68 with SPG.

In reality, though, I've only "earned" seven night credits with Marriott Rewards, all from award stays within the past few weeks. The other 30 credits came from my co-branded credit cards — 15 from the Marriott Rewards Premier Credit Card and another 15 from the business version. Now, since I'm planning to earn SPG Platinum status this year (which matches instantly to Marriott Platinum), there's no reason to earn status with both programs. But it's still worth earning night credits with Marriott, just in case the new combined program pools lifetime credits from both SPG and Marriott Rewards.

This one I'm pretty bummed about. I've been a Hyatt Diamond member off and on for several years, but now with a requirement to earn 10 more annual night credits (for a total of 60), and the fact that free nights don't count toward this total (though cash and points do), renewing World of Hyatt's Globalist status is likely out of the question. The benefit I appreciate most is the confirmed suite upgrades — which I most recently used at the Hyatt Regency Guam (below) — though I've taken advantage of the free breakfast perk plenty of times, too.

I've stayed 22 nights in 2017, which means I have 38 to go. Without some serious mattress running, I'm just not sure how to make that happen — we're talking roughly 10 nights for each of the next four months.

At this point, I need to decide whether or not to make a push for Explorist status, which requires 30 nights and includes benefits like four club lounge certificates and a free night in a Category 1-4 hotel. Without top-tier status, though, I'm not sure I'll go out of my way to stay with Hyatt in 2018, so elite status won't make much of a difference here.

I maintain elite status in a few other programs thanks to my premium credit cards, including the following:

Of the above status levels, I find Hilton Gold to be the most valuable (free breakfast!), but I also get quite a bit of value out of National Executive, since I can have my pick of (most) cars on the lot whenever I reserve a midsize car or above. I've driven away with some pretty solid options, especially at the LAX lot.

As you can see, I tend to focus on one or two programs — primarily United MileagePlus (thanks to excellent upgrade opportunities) and Starwood Preferred Guest (thanks to regular suite upgrades, free breakfast and more). I also leverage my premium credit cards to earn status in some programs that I don't go out of my way to use, but do come in handy when I need them, such as Hilton Honors and IHG. And, the fact that National's so generous with its Executive car selection (some of the time, at least), I prefer to rent with National whenever I can — even though I don't have enough rentals each year to earn status without the help of my Amex Platinum card.

Which elite statuses are you working toward this year?

Featured image by OLYMPUS DIGITAL CAMERA
Editorial disclaimer: Opinions expressed here are the author’s alone, not those of any bank, credit card issuer, airline or hotel chain, and have not been reviewed, approved or otherwise endorsed by any of these entities.