How to Craft an Airline Menu by Celebrity Chef Joël Robuchon 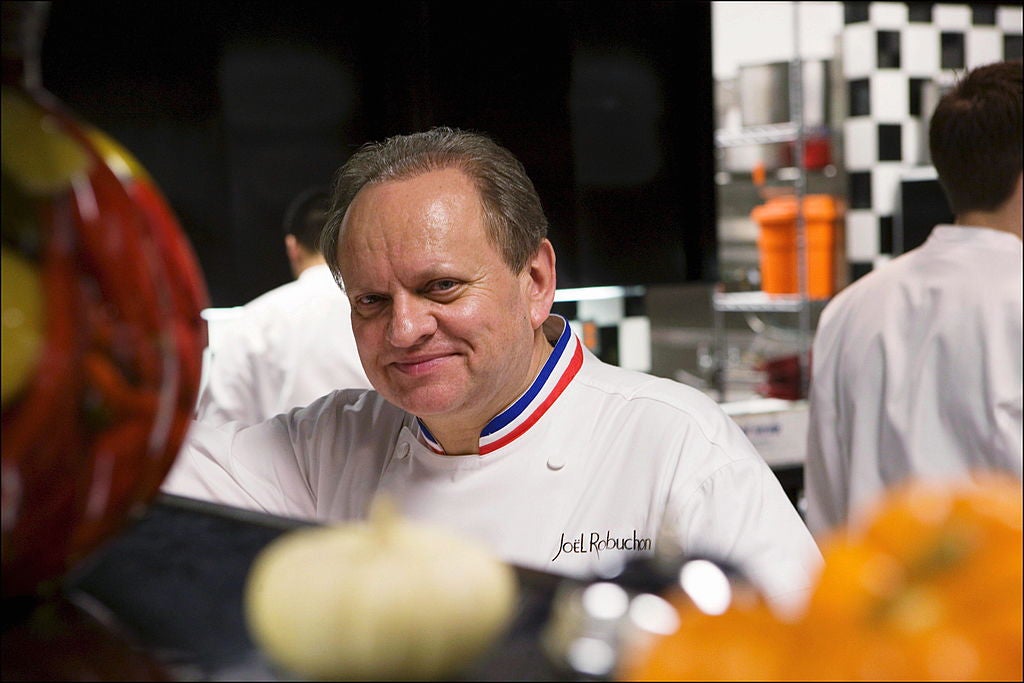 How to Craft an Airline Menu by Celebrity Chef Joël Robuchon
This post contains references to products from one or more of our advertisers. We may receive compensation when you click on links to those products. Terms apply to the offers listed on this page. For an explanation of our Advertising Policy, visit this page.

Joël Robuchon's restaurants have earned the man 31 Michelin Stars — more than any other chef in the world — and he was named the Chef of the Century by the influential French restaurant guide Gault et Millau. In early 2017, the Frenchman helped develop Air France's long-haul La Première menu. Below, Robuchon shares his experiences as a restaurateur-turned-airline chef.

What do you have to do to create a menu that's as enjoyable in the air as it is on the ground?

That’s an interesting question. Being that it is at a different altitude, very often smell and taste become slightly more muted. That said, we never want to overwhelm the palate, so making something that can be simply translated and yet still tastes exceptional is the ideal.

Studies have shown that certain basic flavors are suppressed (salty and sweet), while others may be boosted (umami). How do you make up for those changes while not simply boosting, say, salt levels?

There are some dishes that I have created, such as the Osetra Caviar on a Lobster Gelée, which directly make up for the lack of salt. In the end, however, I don’t try to follow those studies, as I believe that a well-balanced dish will remain well-balanced in any location.

Health is extremely important as well, and something that I look at often. I don’t believe in adding salt or sugar just to add it — I think that using certain ingredients, you can infuse the necessary flavor into a dish with items such as caviar, which are naturally salty, or some types of lobster, which add a sweeter component.

Texture is one of the main components of a dish. We can’t think about taste without texture, just as we can’t think about a dish without thinking about presentation — although that comes after the flavor, of course. In the end, it needs to be simple and delicious.

How much importance do you place on visuals for the meal, and how do you ensure the standards are met at what are essentially mass-production levels?

This is obviously very difficult. I specifically have small restaurants so that I can have a higher level of control with regard to the flavor and consistency of the product. But when designing a meal that will be served to a higher number of guests, I work on creating something that can be recreated simply and designed for guests that will still have the flavor despite being executed more easily than many dishes I may be known for.

Do you ever take, um, biological considerations into account? For example, do you avoid using prunes, caffeinated foods and other diuretics?

This is a great point — I hadn’t thought of it, but I have rarely used prunes. For menus in the past I’ve created dishes with caviar, duck and mango, but have not thought in those terms.

Does your menu have to be tailored to long-haul flights in some way?

I work with Air France, and they have created a very good project that includes not only me but other chefs in their higher-tiered guest flights — but the dishes I create will only be served to those that are traveling long distances. Perhaps it’s because I have, as a Frenchman, a reputation of using butter and heavy ingredients that put people to sleep!

How important is sourcing locally?

Sourcing locally is a huge focus in all of my restaurants. All of the menus in each location are actually built based on the produce and the local ingredients that we have available to us. When looking at the airlines, it becomes a big step in the production of the dishes to make them with good ingredients before they are flown to where they will inevitably be served to guests.

How much do the constraints of the airline's logistics and equipment affect what you put on the menu?

Part of the fun is to look at what equipment exists and then to see how we can be driven to make a great product without an entire kitchen or a kitchen staff at our disposal. It is extremely important to be able to create something that can be executed impeccably, because the recipe is made to be prepared simply. There are limitations in every aspect of our business; whether it is in an airline or in a restaurant. That is where the creative component of the work is, to find a manner in which we can successfully make a dish that can be recreated on a higher scale that still satisfies the gastronomes of the world.

Do you personally test each menu item?

Absolutely, without having tasted the final product, there is no way of knowing what will be served before giving it to others!

How do you avoid pitfalls like the one that befell passengers of a December Virgin Australia flight, where the crew served parmesan sandwiches (apparently to take advantage of the umami boost in the air), but the "dirty socks" smell of the cheese made passengers violently sick?

Unfortunately, we are not able to take into account every guest’s allergies or restrictions on their diets, but by trying to appeal to as many people as possible, we can avoid the dishes that will have an impact on other people on the plane, such as egregious odors that will affect those who are not eating the dish themselves. I always look for feedback — the food is not made for anyone but the passengers, so their feedback is the most important aspect of the menu creation.

What do you order when you fly, and why?

(Chuckles) I sleep! When I do eat, I am very easy to please. I like simple dishes, so just tomatoes and avocado will do.

For more on the science behind airplane food, check out this in-depth report.

Have you tried Chef Robuchon's food on Air France? If so, let us know how it was, below.