10 Restaurants and Bars Based on Your Favorite TV Shows 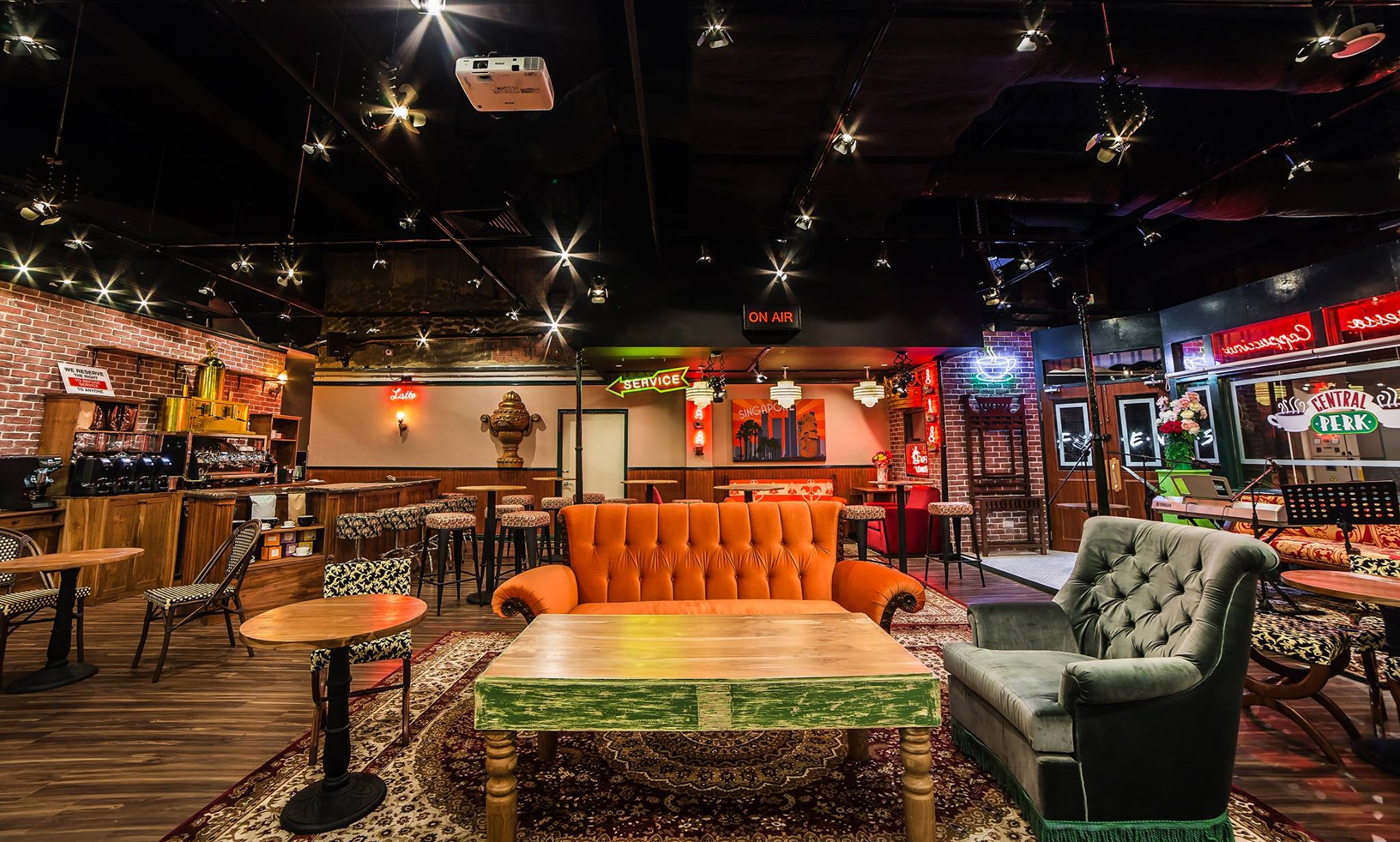 If you’ve ever longed to drink a beer at a bar where everybody knows your name, celebrate a Bayside Tigers victory with a burger and milkshake or thank your gal pals for being a friend over a shared cheesecake, you’re in luck. All around the world, hit television shows have been providing inspiration for restaurateurs and bar owners, so whether your small-screen tastes lean toward classic sci-fi or cheesy ‘90s teen dramadies, there’s a place for you. Here are 10 of our favorites, based on all your favorite TV shows.

Though she amassed more than 100 acting credits throughout her nearly-50-year career, the late Rue McClanahan will always be best known for her role as randy retiree Blanche Devereaux in the beloved NBC series The Golden Girls. Though McClanahan passed away in 2010, her legacy lives on at Rue La Rue Café, a European-style café that just opened in Manhattan’s Washington Heights neighborhood last month. The brainchild of Michael J. LaRue, a longtime friend (and dare we say “con-fi-dant”) of McClanahan’s, LaRue described the eatery — which has been jam-packed since it opened — as “a museum with good food.” Among the many cherished items on display are various pieces of clothing she wore both on the screen and stage, her 1987 Emmy Award for Outstanding Lead Actress in a Comedy Series and a replica of the feisty foursome’s Florida kitchen. Save some room for cheesecake!

Though the show was set in New York City and filmed in Los Angeles, if you want to pay tribute to Seinfeld’s most lovable loser, you’re going to have to head to the Land Down Under. In early 2016, George’s Bar — a tribute to all things George Costanza — opened in Melbourne’s Fitzroy neighborhood. Though its façade belies the Seinfeld obsession within, it doesn’t take more than a quick look at the art on the walls — as well as an entire entryway filled with George's best quotes, written in sharpie by visitors — or a glance at the menu to realize you’ve been transported to Costanza-land. In addition to a menu of more than a dozen beers and ciders, there’s also a small menu of toasties — like the Art Vandelay, a tasty ham and cheese sandwich — or you can order signature Seinfeld favorites like Snickers, Twix and pretzels (because, hey, "These pretzels are making me thirsty!) There’s no secret handshake needed to get inside, but we’d recommend learning the Van Buren Boys’ sign, you know, just in case.

In early 2016, it was announced that the Bayside Tigers would be coming to Chicago’s Wicker Park via Saved by the Max, a Saved by the Bell-inspired pop-up restaurant that was scheduled to open — and close — last summer. Summer came and went, but the crowds remained, and nearly a year later, it's still open and reservations are still strongly recommended. The restaurant is a pretty close replica of The Max, Zack Morris and the gang’s favorite diner, complete with retro video games, a jukebox and even a row of lockers. Who needs to pop caffeine pills when there’s all this excitement?

If you ever wondered whether the very specific humor of Friends got lost in translation when it aired in international markets, consider this: Beijing is home to its own version of Central Perk, the coffee shop favored by the friends of Friends. But rather than create an exact replica, the café is set up more like a set, a subtle reminder that makes it feel a bit like a studio tour — there’s even a laugh track. In addition to that big orange couch, there’s a resident feline named — you guessed it — Smelly Cat, and the series plays on a loop. A separate room recreates Joey and Chandler’s apartment, foosball table and dartboard included (but no Duck and Chick). Amazingly, the Beijng café is not the only time Central Perk has sprung to life — there's one in Singapore, too. In honor of the show's 20th anniversary in 2014, a pop-up version of the café opened for about a month in New York City, and Gunther was there to welcome guests.

It may not have the Sandia Mountain views, but ABQ London has created a pretty powerful formula for replicating the Breaking Bad experience — in a bar — and best of all, it’s a completely interactive experience. For £30 (~$37) apiece, guests can book an hour and 45 minutes of time in ABQ’s RV-turned-cocktail lab. With Walter White’s chemistry manual as your guide, you can cook up a few batches of cool cocktails like The Gale, a mix of tequila, mezcal, Kahlua, cold-brewed coffee and cinnamon espresso topped with green cardamom and pink peppercorn hydrosol air. Unfortunately, there’s no Los Pollos Hermanos around (though a short-lived version of the chicken joint will pop up at SXSW in Austin later this month). Yeah, science!

Somewhere between the aforementioned Central Perk and ABQ London is Walter’s Coffee Roastery, a Breaking Bad-style coffee laboratory — or Coffee Super Lab — that takes a more scientific approach to java. “From extraction and brew temperatures to espresso machine pressure and grinder configuration, we have coffee down to a science,” states the company’s website. After beginning its life in Istanbul in 2015, a second outpost opened in Brooklyn’s Bushwick neighborhood in September, while a third recently opened in Dubai.

Given Cheers’ popularity throughout the 1980s and into the early 1990s, it was really only a matter of time before someone thought to create a replica bar. And that does exist, in Boston’s Faneuil Hall. But then there’s the “real” Cheers, the Beacon Hill bar formerly known as the Bull & Finch Pub, which has been around for nearly 125 years and was the inspiration behind the series. It kept its original name until 2002, when it was renamed for the series it inspired. (We know, it’s confusing.)

8. The Pandorica from Doctor Who

Whether your allegiance lies with The Tenth Doctor (David Tennant) or you’re more of an old-school Fourth Doctor (Tom Baker) type, Doctor Who fans of every stripe can come together to celebrate their favorite Time Lord at The Pandorica, a restaurant in Beacon, New York, named after the fictional prison built under Stonehenge to contain The Doctor. According to the website, it’s a place where “you can enjoy watching Doctor Who whilst indulging in an eclectic menu of intergalactic comfort foods starting with ‘spoilers’ and ending with ‘sweeties.’” And yes, The Doctor’s favorite dish — fish fingers and custard — is on the menu.

9. The Way Station also from Doctor Who

90 minutes from The Pandorica (or even faster if traveling via TARDIS) is The Way Station, another ode to the BBC’s long-run sci-fi series in Brooklyn. More of a music venue than a straight-up fan hotspot, the bar’s main feature — a TARDIS at the bar — makes for a great photo op.

10. The Black Lodge from Twin Peaks

More than 25 years after it went off the air, David Lynch’s Twin Peaks still maintains a devoted following. And while fans don’t have long to wait until the May 21 series’ revival on Showtime, they can get their fix of a damn good cup of coffee in one of two places: Twede’s Cafe in North Bend, Oregon, which played the part of the Double R Diner in the original series, or The Black Lodge, a charmingly rustic and appropriately Lynchian bar and (vegetarian) restaurant located in a cabin in Vancouver, British Columbia about 500 miles north. In addition to a nice selection of local beers, The Black Lodge features a Twin Peaks-inspired cocktail menu. We like the Dr. Jacoby, a mash-up of coconut rum, banana liquor and pineapple juice that feels strangely out of place surrounded by all this rusticity. Then again, predictability isn’t one of Lynch’s strong suits anyway.

Have you been to any of these places? Tell us about your experience, below.

Related stories
Legislation that could gut credit card rewards set to move through Congress
Would you stay at 1 of these 8 haunted hotels this Halloween?
Southwest winter flash sale: Get one-way flights for as low as $29
You can currently buy points and miles with up to a 100% bonus — but should you?
Featured image by Image courtesy of Central Perk Singapore's Facebook page.