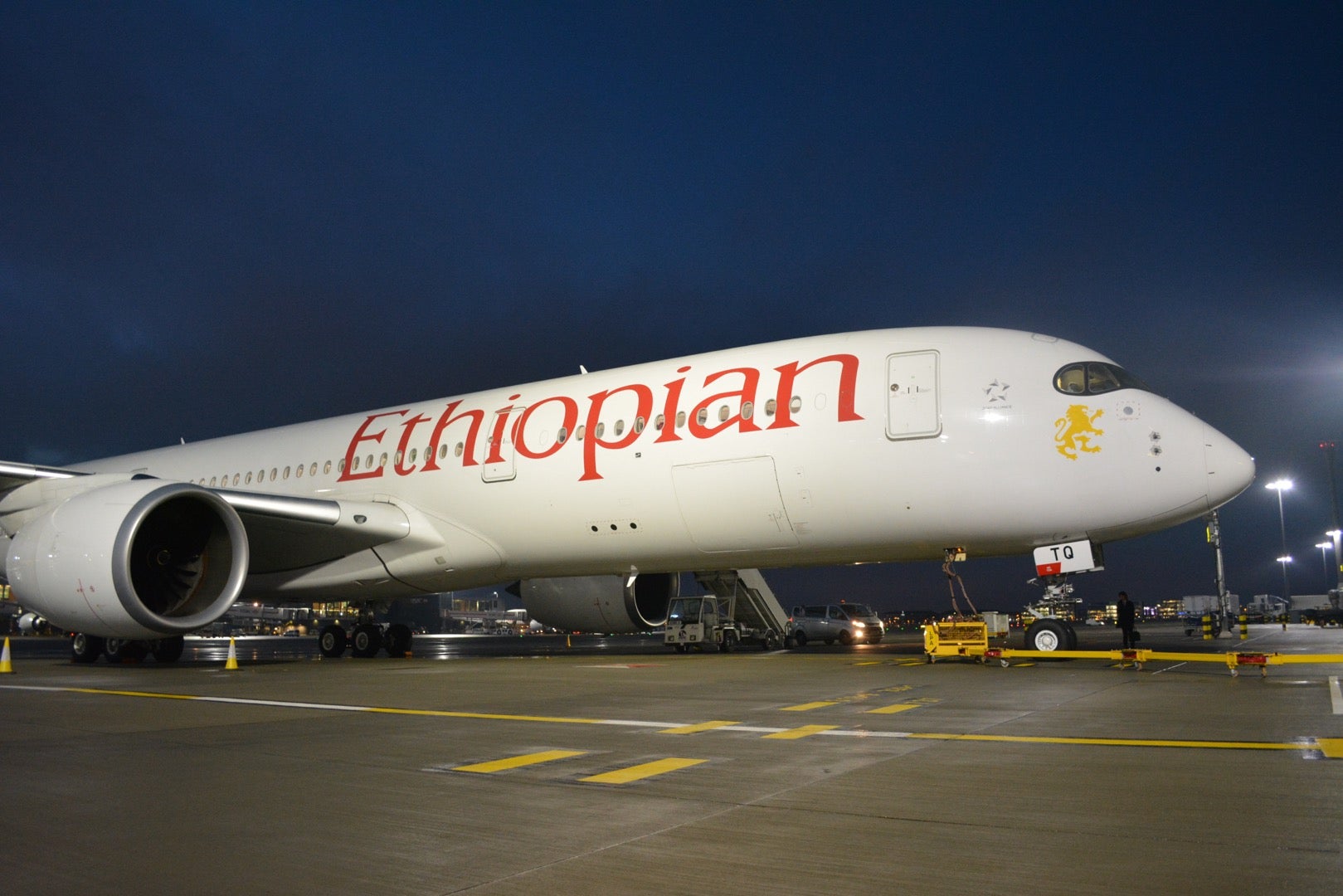 Ethiopian Airlines is currently the only African operator of the Airbus A350-900 XWB, an aircraft the carrier first took delivery of last summer. The A350 operates from Ethiopian's hub, Addis Ababa Bole International Airport (ADD), on flights to London Heathrow (LHR), Dubai (DXB) and Dar es Salaam (DAR). The airline will add the A350 to its Kinshasa (FIH) and Frankfurt (FRA) routes later this month, as well as to Johannesburg (JNB) later this year.

Ethiopian Airlines' A350-900 is arranged in a two-class configuration, with 30 Cloud Nine business-class seats and 313 economy seats.

The Cockpit and Galley

First up is the cockpit, equipped with the latest state-of-the-art technology.

Wider, more spacious galleys on the A350-900 will enable cabin crew members to conduct a more efficient food and beverage service during the flight.

Next, a peek at the crew rest area, featuring bunks and a seat for those who are off-duty.

Business class is arranged in a six-abreast, 2-2-2 configuration, with 30 fully-flat seats — seats are 22.9 inches wide while the pitch is 78 inches.

The seats are upholstered in a red fabric, with a grey, leather, moveable headrest.

Each seat comes with a universal power socket and a USB port, as well as a lamp and in-flight entertainment remote control. The cabin itself feels very spacious, mainly due to the absence of the central overhead lockers, as you can see below.

While the seats are very comfortably padded and recline to a fully-flat position, I found the foot rest area to be incredibly narrow — you'll likely have to position yourself at a bit of an angle when it's time to get some sleep.

There is one noticeable disadvantage to most of these business-class seats: like Lufthansa A350 and Air Caraïbes A350, these don't offer direct aisle access. With this in mind, I would sacrifice having a nice view out the window by choosing to sit in the middle block of seats, as these do have access to the aisle and you won't have to worry about climbing over or having another passenger climb over you when the seat is fully reclined.

Ethiopian Airlines decided not to opt for colorful LED mood lighting aboard this aircraft, something that seems very unusual for an A350 operator. The carrier has also decided against installing Wi-Fi capabilities, although it's a feature that's supposedly coming soon.

The economy cabin is arranged in a nine-abreast, 3-3-3 configuration with 313 seats. The seat pitch is 32 inches and each is 18 inches wide.

Economy seats come with a moveable headrest, pillow, blanket and headphones, while on-demand in-flight entertainment is provided for all. Unfortunately for those who love the onboard cameras usually featured on aircraft such as the A350 — which display outside views from the plane's tail, belly and nose — Ethiopian Airlines did not choose this particular add-on, so you won't find it as an option on the in-flight entertainment.

Row 11 seats AC, and HK (picture above) are twin seats and have more space due to the exit row. There's also a huge amount of legroom available in Row 33 seats ABC & HJK, where there is no row in front because of the nearby exit.

It's good to see African airlines flying some of the latest aircraft in the skies, with even smaller airlines such as RwandAir recently taking delivery of its first wide-body aircraft. Ethiopian Airlines' A350-900 is comfortable due to its extra-wide cabin and the fresher air that's introduced every 2-3 minutes. While it's a shame the airline didn't opt for direct-aisle-access seats in business class — I would have also liked to see it include LED mood lighting to help reduce jet lag — the aircraft is still a huge upgrade from its previous fleet.

Have you ever flown on Ethiopian Airlines' A350-900? Tell us about your experience, below.