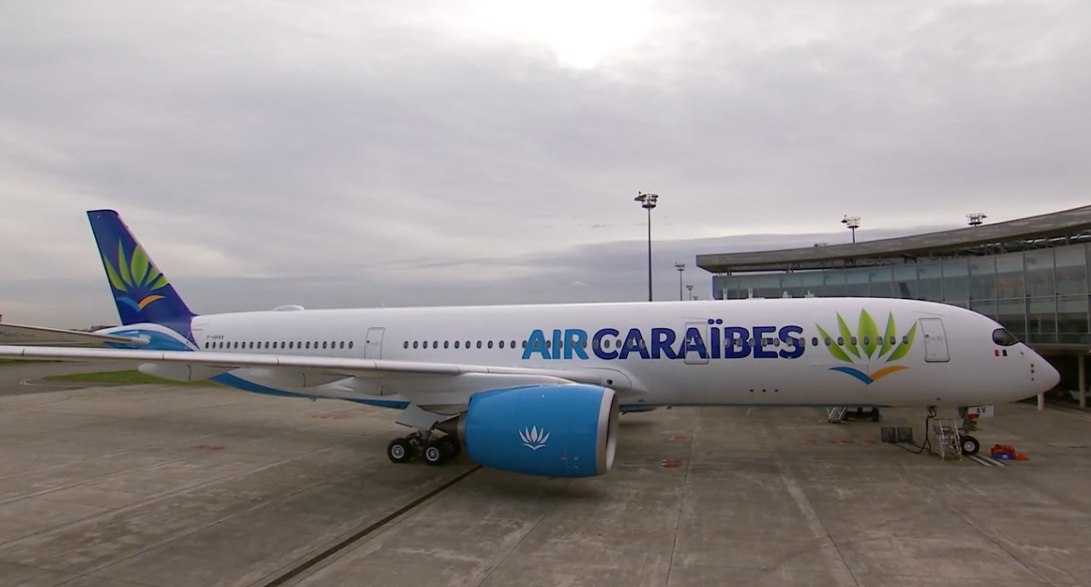 This week, Air Caraïbes took delivery of its first Airbus A350-900. The French leisure airline also has two more of these planes on order, in addition to three Airbus A350-1000's, which will make it easier for the carrier to expand both the number of routes and frequency between Paris and the Caribbean. Here's a closer look at what makes the A350 so special.

This is the first A350-900 to accommodate 389 passengers, the largest number of seats on this type of plane so far, largely due to the 3-4-3 seating configuration in its economy cabin. It's also the first French airline to fly the A350, which will operate it alongside the carrier's current Airbus A330s on routes between Paris Orly Airport (ORY) and the French Caribbean, including destinations like Pointe-à-Pitre International Airport (PTP) in Guadeloupe and Martinique Aimé Césaire International Airport (FDF), starting March 2. The aircraft has three classes, with 18 seats in business class, 45 in premium economy and 326 in economy.

The business-class cabin is arranged in a 2-2-2 layout, with each seat reclining to a fully-flat position, making this the first airline to offer lie-flat seating between Paris and the Caribbean. There's one major disadvantage, though — as with Lufthansa's A350 business-class seats, these don't offer passengers direct-aisle access. Seat features include personal headsets, USB and universal sockets, a light and an IFE screen with more than 150 hours of movies and TV shows to keep you busy during the flight.

Air Caraïbes' new premium economy seats are arranged in a 3-3-3 configuration, just like you'd see in an A350-900's economy section, but with a more respectable pitch of 36 inches — the seat width, however, is just 17.3 inches, making it one of the skinniest seats in a premium economy cabin. In-seat power is provided by both USB and universal power sockets, while moveable headrests can be adjusted for your comfort.

Economy gets even more snug, with a seating configuration of 3-4-3, a layout that's typically found in the economy section on other aircraft like the Airbus A380. Most other airlines opt for the 'standard comfortable' seat width of 18 inches — which helps increase the feeling of 'shoulder space' while you're sitting next to another passenger — and include an average seat pitch of around 31-34 inches. But by installing the extra seat in the middle row of economy on Air Caraïbes' A350, it's now the first A350 operator to not have the usual 'Airbus standard' 18-inch seat width, instead offering a seat that's just 16.8 inches wide with 31" of pitch. Airbus was able to fit the 'extra' seat in the middle row, making it 10-abreast, by reducing the width of the armrests and slightly reducing the width of the aisle.

It's important to note that Air Caraïbes is a leisure carrier and by having a higher seat capacity on the aircraft, it's able to offer lower fares to the Caribbean than its competitors, most of which are around 350 euros, or $370 round-trip. This also allows the airline to price out its premium economy fares so they're closer to the cost of a regular economy flight you'd find on other airlines operating similar routes.

Of course, the main benefits of the A350 are still present, including its extra wide-body cabin, LED mood lighting and a more frequent introduction of 'fresh air' into the cabin that occurs every 2-3 minutes, meaning that a journey in economy on an Air Caraïbes A350 will be much more comfortable than on its existing aircraft — there's still a feeling of 'space' that's evident due to the structure of the cabin's walls and ceiling.

Although this is the tightest A350 in the skies (in terms of passenger comfort), it's almost a 'business as usual' offering for Air Caraïbes, which already has A330s flying with similar cabins, its focus being able to fly as many passengers as possible while offering the cheapest tickets possible on its Paris-Caribbean routes. The advantages to flying on an A350 (wider cabin, extra space, mood lighting and fresher air) are an obvious upgrade from the airlines' existing fleet and it's good to see the carrier is now offering the first fully-flat bed between Paris and the French Caribbean, despite the fact it's joined Lufthansa by not offering direct-aisle-access in business class.