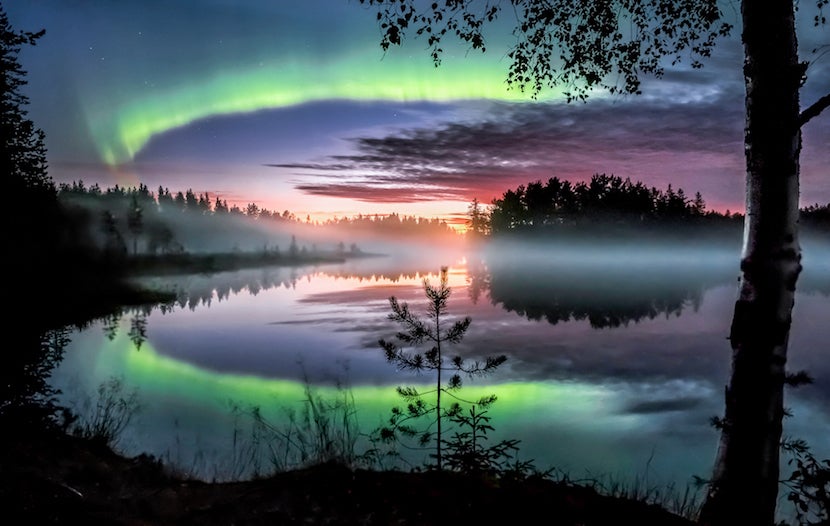 The Northern Lights (aka Aurora Borealis) may seem like a phenomenon that only happens in far-flung locales too out of reach to even try making the trek — think again. These dancing lights glowing above the northern hemisphere’s magnetic pole have been spotted as far south as Florida. But if you want to ensure you’ll actually catch the auroras in their full glory, head to the source in northern Scandinavia, Canada, Alaska, Greenland and northern Russia in the darkest of winter months, typically from late-September to late-March. Of course some cities are better than others, both for visibility and accessibility, and can even be reached with points and miles. Here are six of our top picks from the easiest to reach to some of the most scenic. The best part? Some spots even offer prime viewing platforms right in the city center.

Sometimes your chances of catching the Northern Lights are as slim as spotting a shooting star. If you want the highest odds, Tromsø, in the heart of the Arctic wilderness, is your place. The Norwegian town sits in the middle of the Northern Lights Oval, meaning there's a high probability you'll catch the auroras — even from the center of the city.

How to Get There: Fly non-stop into Oslo Airport (OSL) from Miami (MIA), Fort Lauderdale (FLL) or New York (JFK or EWR) on SAS or Norwegian, then take a short connecting flight to Tromsø Airport, Langnes (TOS). SAS is part of Star Alliance, so you can cash in 70,000 United MileagePlus miles for a one-way business-class seat or 30,000 for an economy seat. Flights departing from FLL on Norwegian start at $200 one-way in April.

Where to Stay: The 269-room Radisson Blu Hotel Tromsø is centrally located and not only provides a prime launch pad for your Northern Lights adventure, but also sweeping views of the auroras from the glass bridge that connects the buildings. Rates start at 1,095 NOK (~$129) or 44,000 Club Carlson Gold points per night.

As with the rest of Northern Norway, Svalbard is home to the glowing Northern Lights come nighttime, but it’s also the only place on the globe you’ll catch these beauties during the day as well. Half the fun here is hunting for the auroras, and you can take your pick as to how you’d like to track them down: by dog sled, snowcat or by boat, cruising through the northernmost fjord.

How to Get There: Fly year-round to Svalbard Airport (LYR) from Tromsø (TOS) or from Oslo (OSL) in the summer season. Tickets on Norwegian start at $200 one-way, while a one-way ticket in economy on SAS starts at $283 or 10,000 SAS Go points.

Where to Stay: Sleep in the northernmost full-service hotel that sits on Norway’s largest island, Spitsbergen. The 95-room Radisson Blu Polar Hotel Spitsbergen shows off panoramic views of Hiorthfjellet mountain and offers plenty of ways to warm up after a day in the snow, from outdoor hot tubs and saunas to Arctic-influenced dinners by the fireplace. Rates start at $222 or 70,000 Club Carlson Gold points per night.

Since Fairbanks falls under the aurora oval, this is the best spot in the state — as well as in the US — to catch the Northern Lights. You may be able to see glimpses of the auroras at the end of summer in September, but the prime viewing season is the middle of winter when the weather is at its coldest and darkest.

Where to Stay: The 100-year-old Chena Hot Springs Resort may sit 60 miles from downtown, but it’s worth the trip since you’ll be able to soak up views of the auroras while taking a dip in the natural outdoor hot springs (rates start at $150 per night). If you’d rather stay in town, book a suite at the SpringHill Suites Fairbanks, a Category 5 Marriott property right downtown along the Chena River. Rates start at $117 or 25,000 Marriott Rewards points per night.

In Yellowknife, the auroras are visible up to 240 days a year thanks to the fact that the city sits at such a high latitude, meaning it experiences longer, darker winters. Dubbed the “Aurora Capital of North America,” you can spot these lights dancing across the sky during two seasons: late-summer to early autumn and winter, from mid-November to the beginning of April.

How to Get There: From Edmonton (YEG) or Calgary (YYC), hop on a nonstop flight to Yellowknife Airport (YZF) on WestJet or Air Canada. Fares on WestJet start at $185 one-way in economy, while flights on Air Canada start at $119 or 10,000 United MileagePlus miles in economy, or 25,000 for a first or business class seat.

Where to Stay: From your home base downtown at the Days Inn & Suites Yellowknife (part of Wyndham Rewards), you’ll be able to explore the area by foot, as well as jet off on nearby trails via snowmobile or dog sled — don't forget to indulge in an onsite sauna session when you get back. Rates start at $123 or 15,000 Wyndham Rewards points per night and include complimentary airport shuttle service. If you really want to feel like you’ve escaped to the remote Canadian wilderness, hop on a 30-minute bush plane ride to Blachford Lake Lodge. Set on a rock overlooking Blachford Lake, the hotel is miles away from civilization — read: roads and light pollution — meaning you’ll be able to catch the auroras in some of the best conditions and locales, which include two aurora decks or on top of the lake during winter. Summer rates start at $866 per person for a two-night cabin stay and include a flightseeing charter, meals and an aurora photography workshop.

After three months of 24-hour sunlight, Finnish Lapland switches gears for dark, cold nights showing off prime views of the Northern Lights the other nine months of the year. When it comes to the most stylish way to watch them, this location is definitely up there, especially with options like glamping in the warmth of an Aurora Dome (ie. a heated igloo-inspired tent) right on Muonio’s frozen Lake Torassieppi, from $162 per night.

How to Get There: The most convenient airport to fly into is Helsinki Airport (HEL) with flights on Finnair from Chicago (ORD) and New York (JFK) starting at 30,000 AAdvantage miles one-way in economy or 57,500 in business. From Helsinki, hop on a connecting 1.5-hour flight to Kittilä Airport (KTT) on Norwegian, with one-way fares starting at $85. From the airport, it's about a one-hour drive to Muonio.

Where to Stay: Since the village is more of a base for exploring the great outdoors and parks like Pallas-Yllästunturi — home of Finland's first hiking trail — hotel options are on the limited side. Camping is a common choice, but if you're in the mood for something a little less rustic but just as authentic, try Lapland Hotel Olos, a ski resort with saunas in the suites and multi-room log cabins by the slopes. Rates for a double room with sauna start at $161 per night. And while it's not a points hotel, you can still keep racking them up by using one of these travel rewards cards.

If WOW air’s $99 flights aren’t incentive enough to visit Iceland, then the fact the Northern Lights can be seen above the city center surely will be. Since the auroras are so present here — and can even be seen from your plane while landing — the city is a great pick for those who don’t want to hunt too hard to find a good viewing spot.

How to Get There: As far as European destinations go, Reykjavík is one of the easiest for Americans to reach to see the auroras. Fly nonstop to Keflavík Airport (KEF) from cities like Boston (BOS), Chicago (ORD), Denver (DEN), Los Angeles (LAX) and Miami (MIA) on budget airliners like WOW Air, with fares starting at $99 one-way, or on Icelandair, with fares starting at $339 in economy. Delta also offers seasonal service from New York (JFK) that starts at 30,000 SkyMiles one-way in economy or 137,500 in first class.

Where to Stay: Part of Hilton’s new millennial-centric brand, Canopy by Hilton Reykjavik City Centre’s sits in the city center near the main shopping street, Laugavegur, in a series of six connected houses. The concept here is all about staying local, from the artwork lining the suites to the fresh fish and organic fare prepped by award-winning chefs at the onsite Geiri Smart restaurant. Rates start at $319 or 101,000 Hilton Honors points per night.

Have you seen the Northern Lights? What are some of your favorite places to catch the auroras?