We had really wanted to return to London for a few years, but job layoffs, pregnancy, and a newborn all interrupted booked and partially planned trips in recent years. We had another attempt planned for a few weeks ago, and despite a one-year-old who wasn’t feeling 100% at the time of wheels-up, we pressed on and the four of us plus Grandma landed 9 hours later in the city that we love.

We love just about everything London, except of course the price of being there. The improved USD to GBP rate helps a bit, but London is still a pretty expensive city. This means it is a good city in which to use hotel points and/or hotel elite status parks, if possible, to knock down your overall trip costs.

Choosing Between the Andaz Liverpool and the Hyatt Regency Churchill

We have stayed at the Andaz Liverpool property in London before, and initially had planned to stay there again on a relatively low rate using a Hyatt Diamond confirmed suite upgrade for sufficient space for the two adults, one child, and one baby. It is a solid property with a beautiful breakfast spot that would have been free with our Diamond status, however I ultimately could not resist trying the Hyatt Regency Churchill, which is a Category 6 Hyatt property just like the Andaz, but in a more desirably (to me) location. The Churchill was where we were booked on one of our trips that never happened, so a part of me really wanted to recreate that experience we missed out on.

Cash rates at the Hyatt Churchill are a good bit higher than the Andaz on average, but if you are using points they would be the same at either 25,000 points per night or 12,500 points + 99 pounds per night on a points + cash rate, if you are lucky enough to be able to snag that rate. 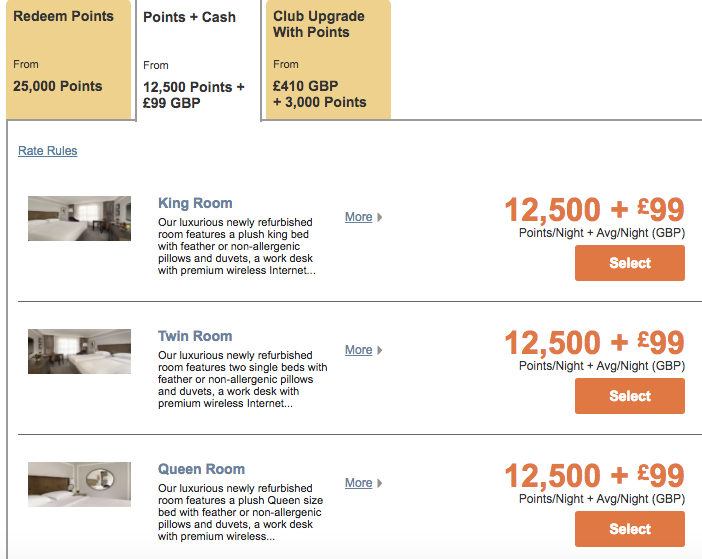 As with many arrivals from the US, we landed pretty early in the morning after a flight that included zero minutes of sleep for me, and not too many more for the rest of our party. In other words, we were tired. We were saying our prayers and crossing our fingers that early check-in would be available. 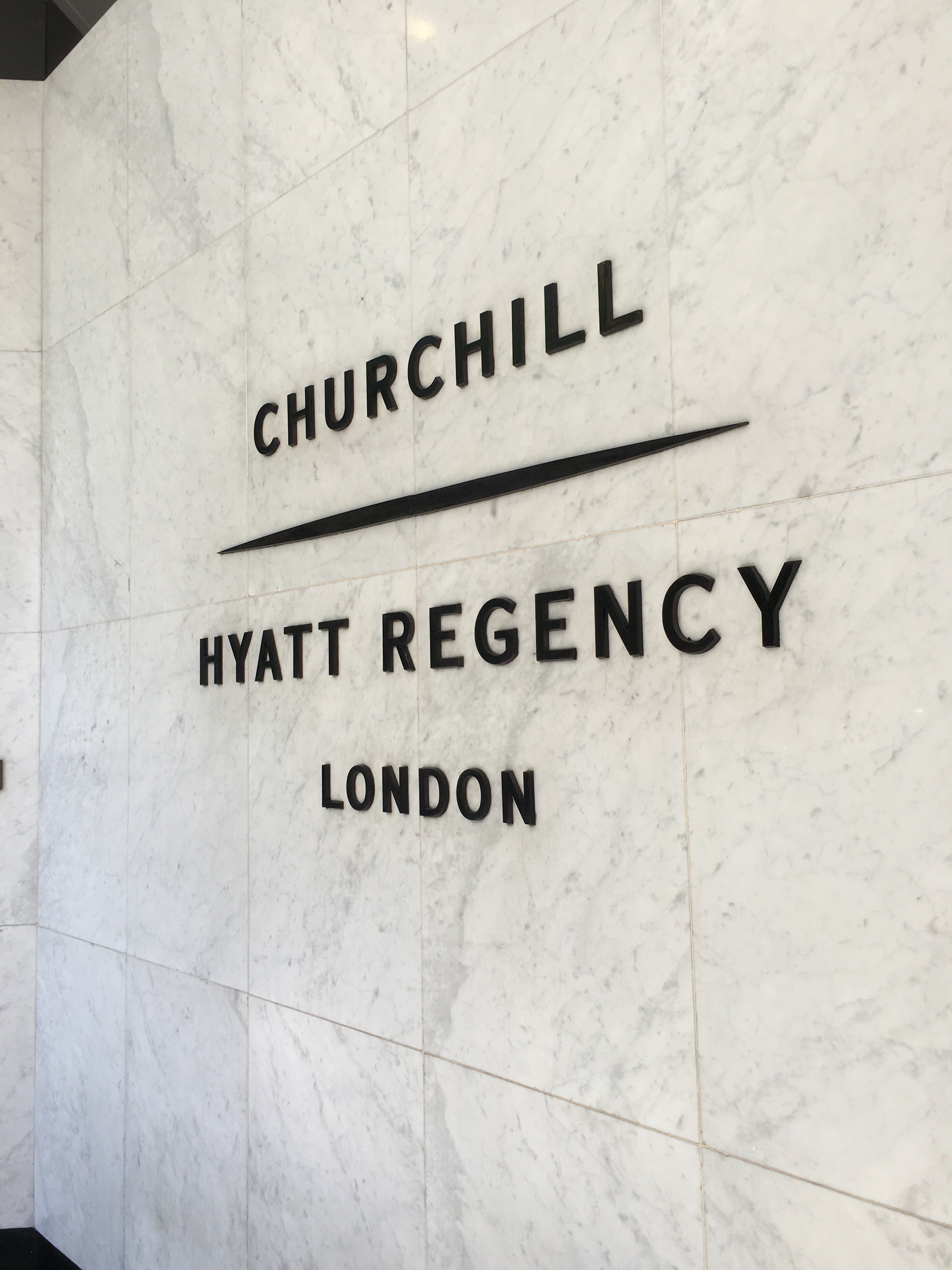 It was probably 9:00 AM when we arrived at the hotel after taking the Heathrow Express train from Heathrow, and then a short 10 minute cab ride to the hotel from Paddington Station. For the record, this was a pretty fast and easy way to get into London for our crew! We were then taken to the 8th floor to complete the check-in process as Diamond members…because clearly Diamond members can’t mix with the commoners in the lobby. <- obvious sarcasm alert. 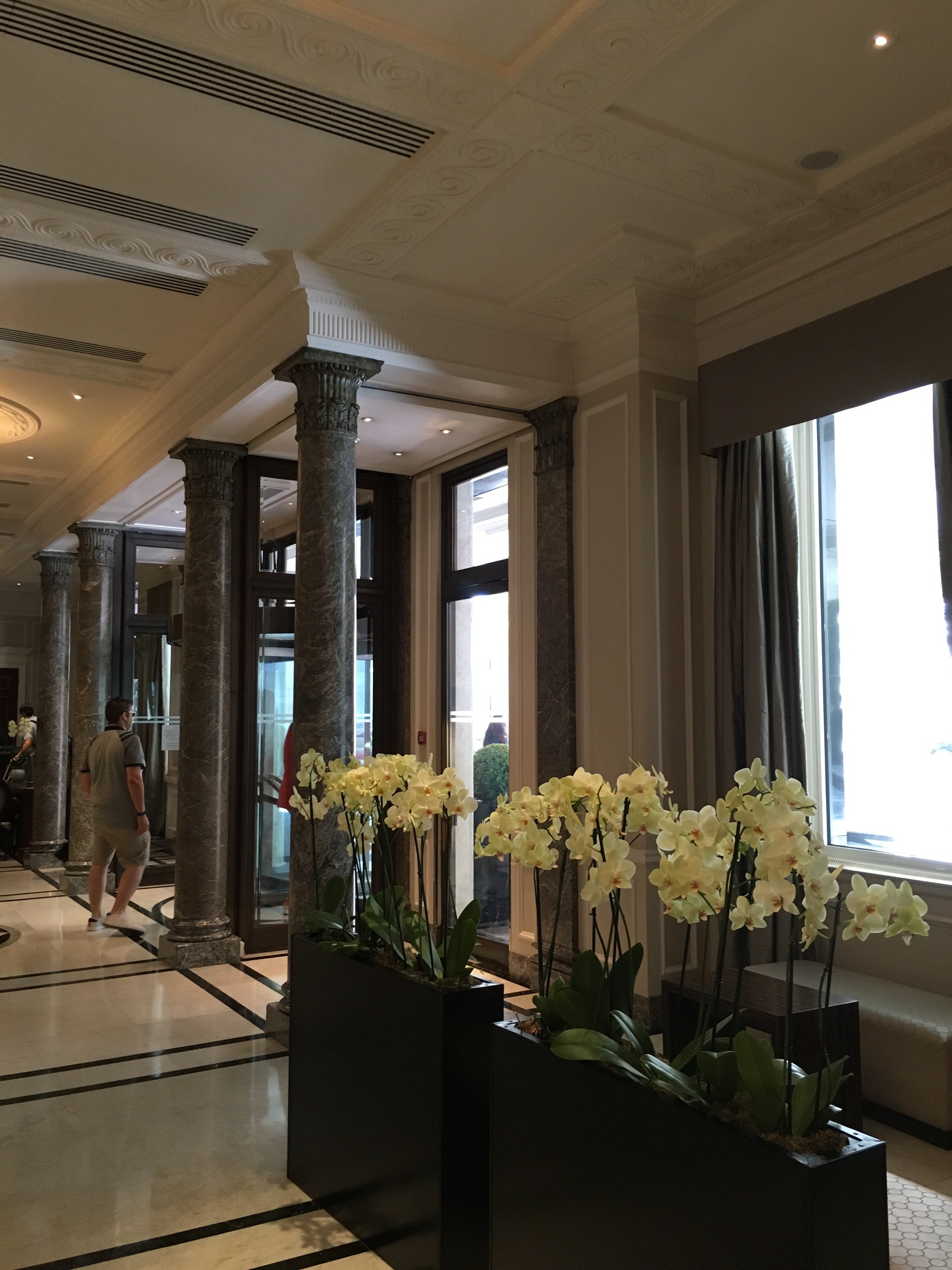 We had secured one standard room for Grandma and Little C via a discount code and pretty good rate from Travelpony.com and one suite using a suite upgrade for Josh, myself, and the baby on a reservation made directly with Hyatt. Technically three people (babies included) are the max for their Regency Suite, though they did offer to make an exception and allow both children in the room if we paid an additional co-pay on top of using our suite upgrade to secure the larger Regency Executive Suite. We declined securing the additional upgrade and paying the additional copay since we could make it work by dividing us between the two rooms, but in the end we lucked into the Regency Executive Suite anyway.

Totally understandably, it was not ready as early as we arrived.

Fortunately, the standard room was available, and Grandma and the two kiddos headed off to nap while we inhaled coffee in the Regency Club and waited for a nap in the suite.

Just as we had given up on a much needed nap and were heading out to walk around London we were told the suite was ready at about 10:30AM. I haven’t been so excited about anything in a long time as I was for that nap! I may have screamed a happy scream in the lounge as if I had one the Publisher’s Clearing House sweepstakes when they told me the suite was ready.

The Regency Executive Suite at the Hyatt Regency Churchill

The Regency Executive suite itself was absolutely gorgeous had a living room/dining table area as well as a half bathroom in the main area.

Then behind some doors there were the sleeping quarters and the full bath room with a separate tub and shower…and fancy toilet.

The suite has been recently renovated, and it was simply amazing to be in such a large and nice space right near Hyde Park in London. We repeatedly said we cannot believe now nice this is. To be able to leverage things like elite status, points, and/or confirmed upgrades to stretch a budget to include otherwise out-of-reach accommodations like the Regency Suite at the Hyatt Churchill in London blows my mind. 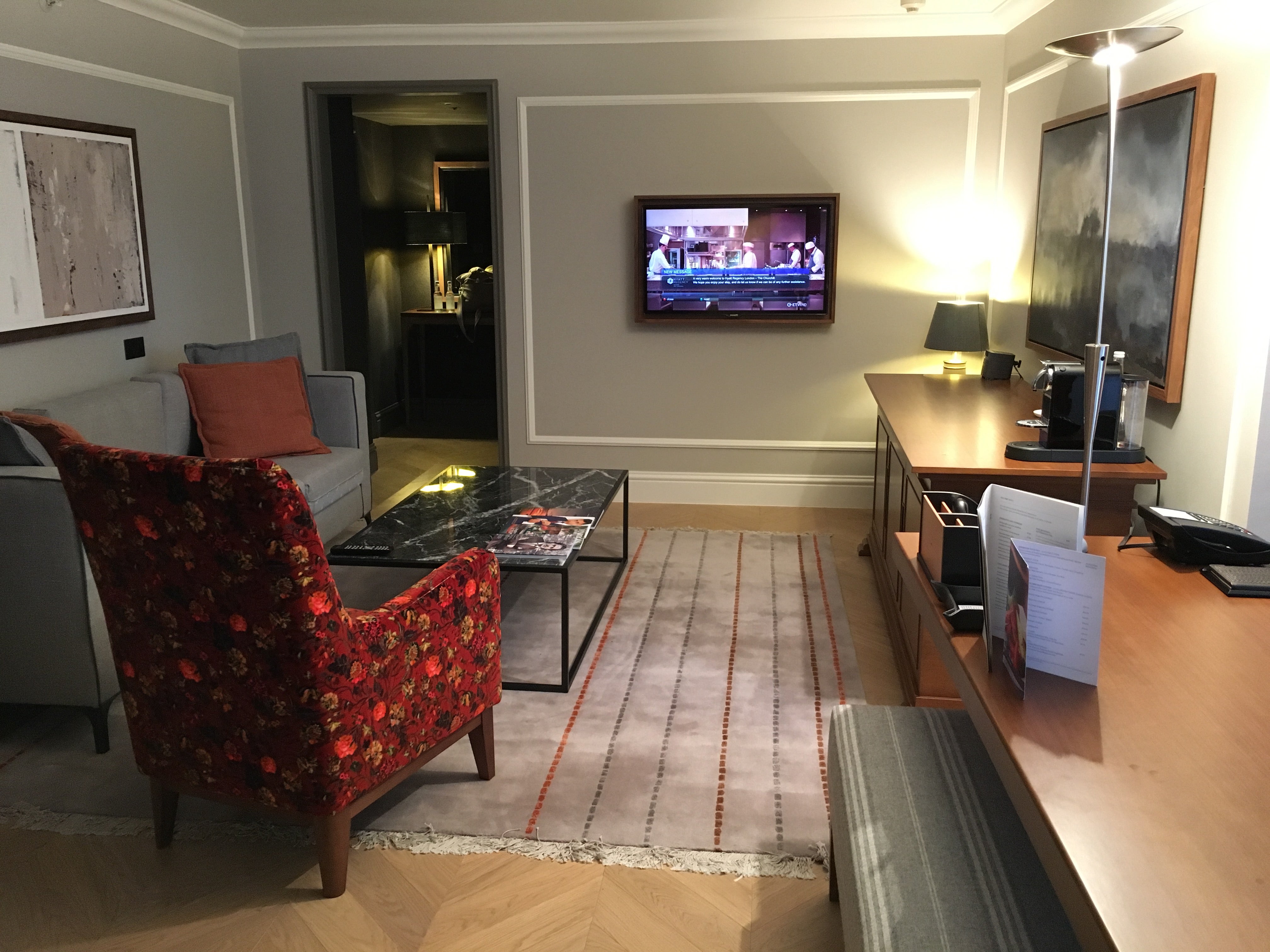 Thanks to jetlag, not feeling well, etc. the little one had a relatively rough time sleeping the first night, but having the separate space for her and her “crib” in the living room made it a bearable situation. If we had all been in the same room it would have been much, much tougher. I do wish they had standard cribs instead of pack and plays, but they did give us a bag of baby toiletries which was nice in case you forgot something behind. 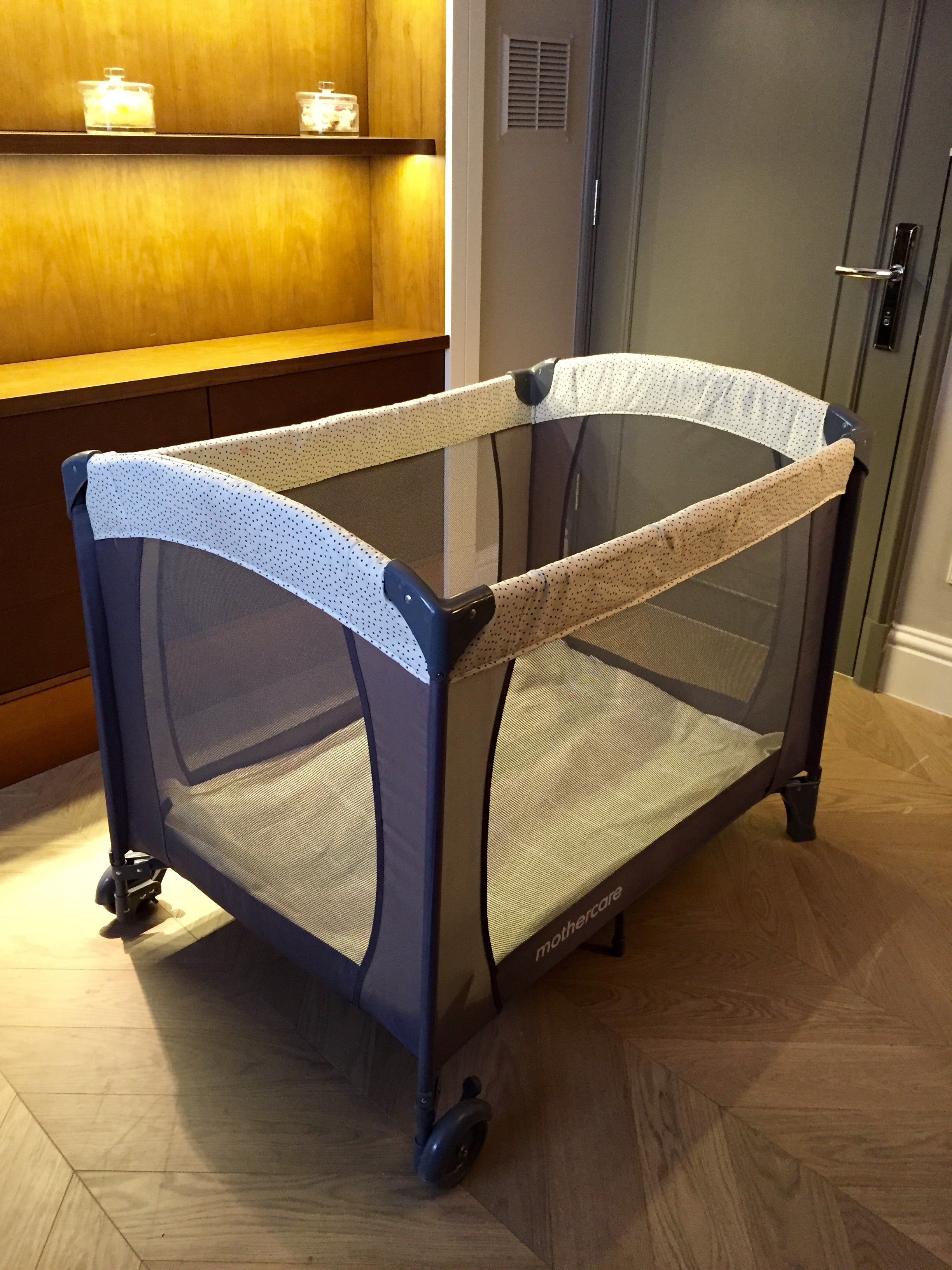 The bed was really good, and by European standards wasn’t as hard as some others I have experienced. The blackout curtains were great, too. We did experience some street noise, but it wasn’t overly loud, and was much less than we later experienced in Edinburgh.

The shower pressure was a 10/10, and while I don’t normally get excited about bath amenities, the Molton Brown products smelled fantastic. It is worth a mention that Grandma’s standard room did not have the same amenities, and I believe only the suites and the club rooms have that brand of products…which is a shame as they really were great! 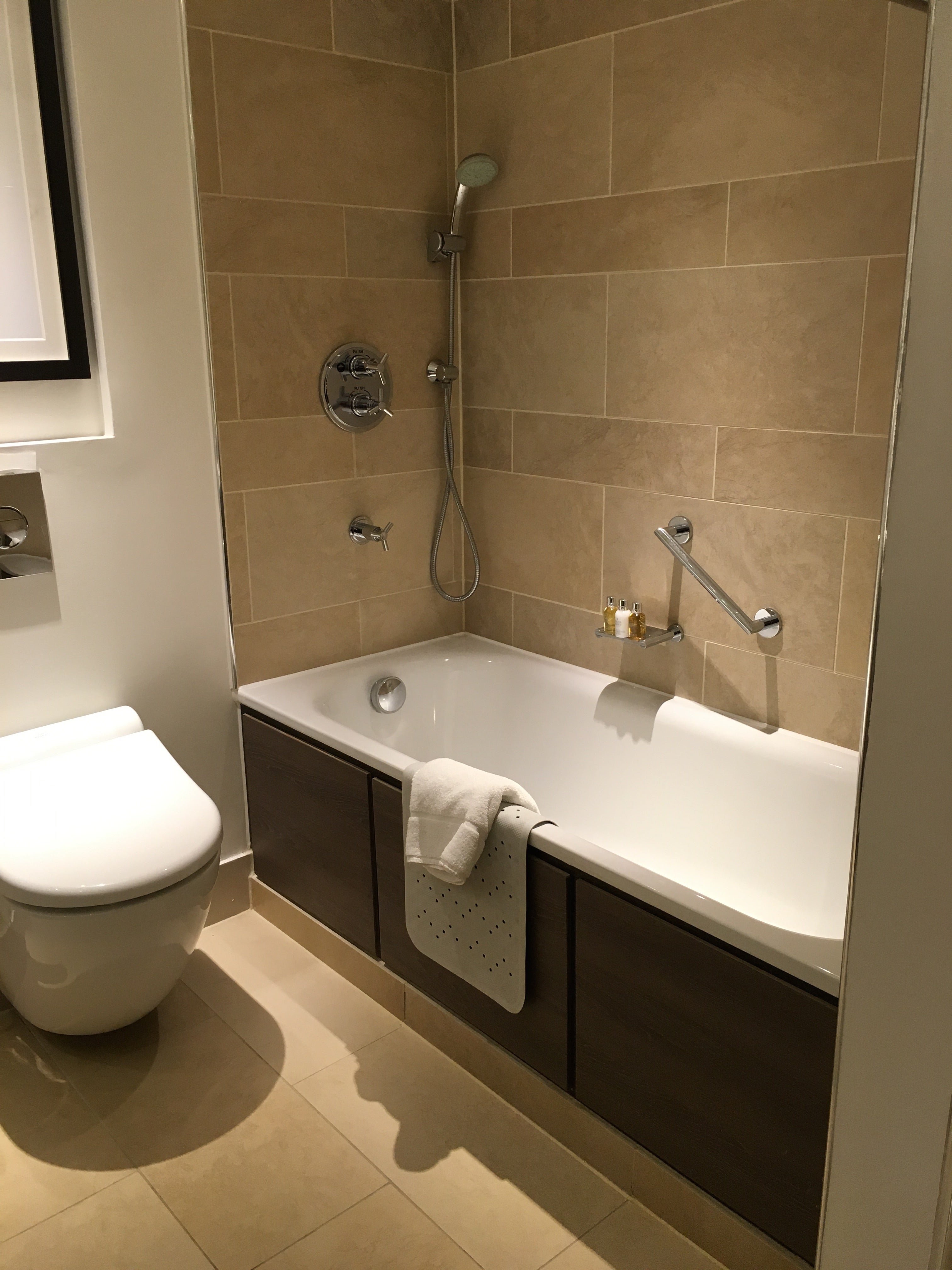 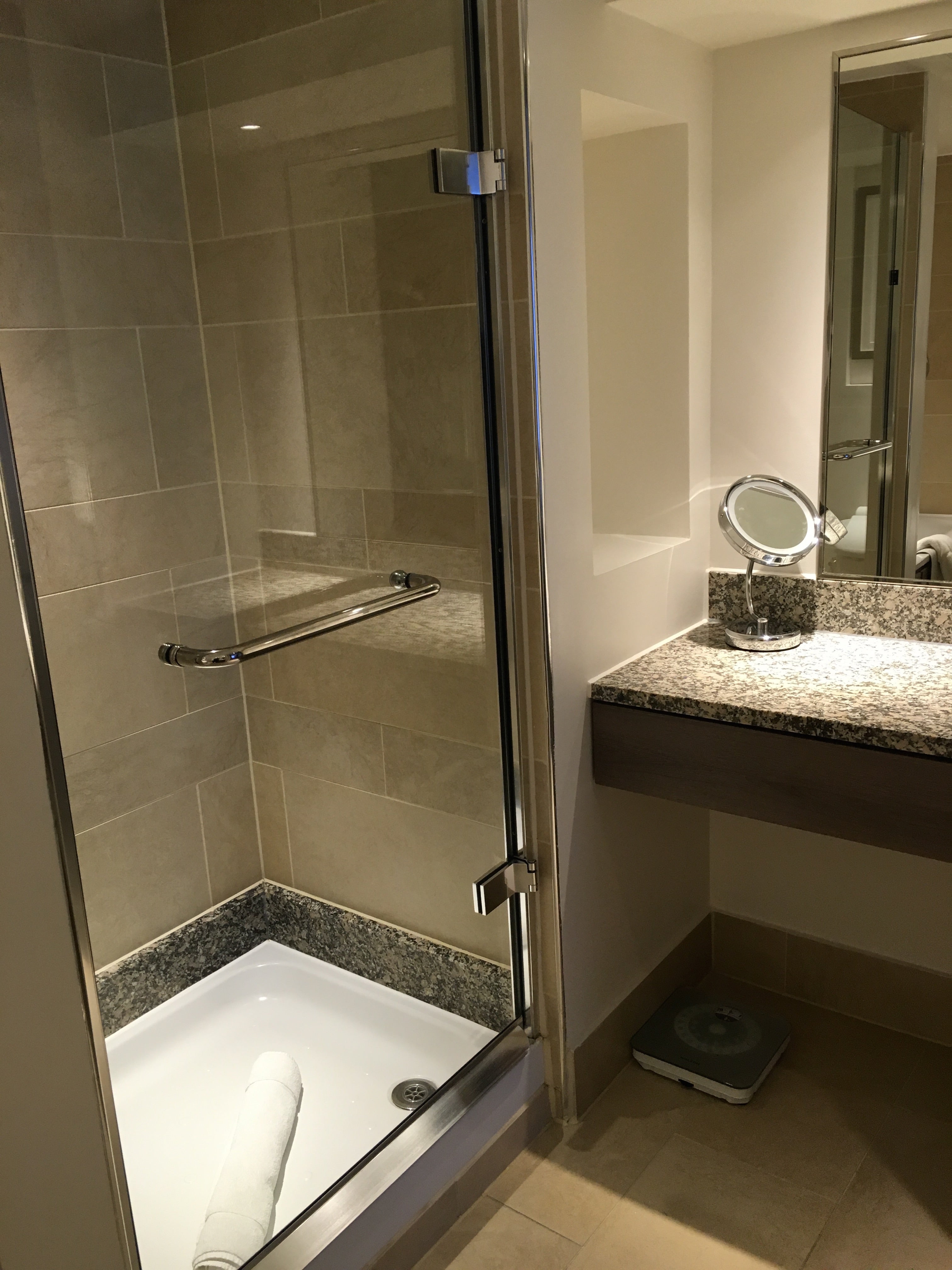 The Regency Club Lounge at the Hyatt Regency Churchill

Speaking of the Regency Club, it was an absolute highlight of this property. It is located on the 8th floor where the Diamond check-in occurs and it serves both breakfast and evening canapes and drinks. Given the high price of food and drinks in London, this is one of the times that I think splurging for a club room on points or otherwise is worth considering, especially for a family with multiple mouths to feed. We ate breakfast there everyday and even made a meal out of the evening service one night. 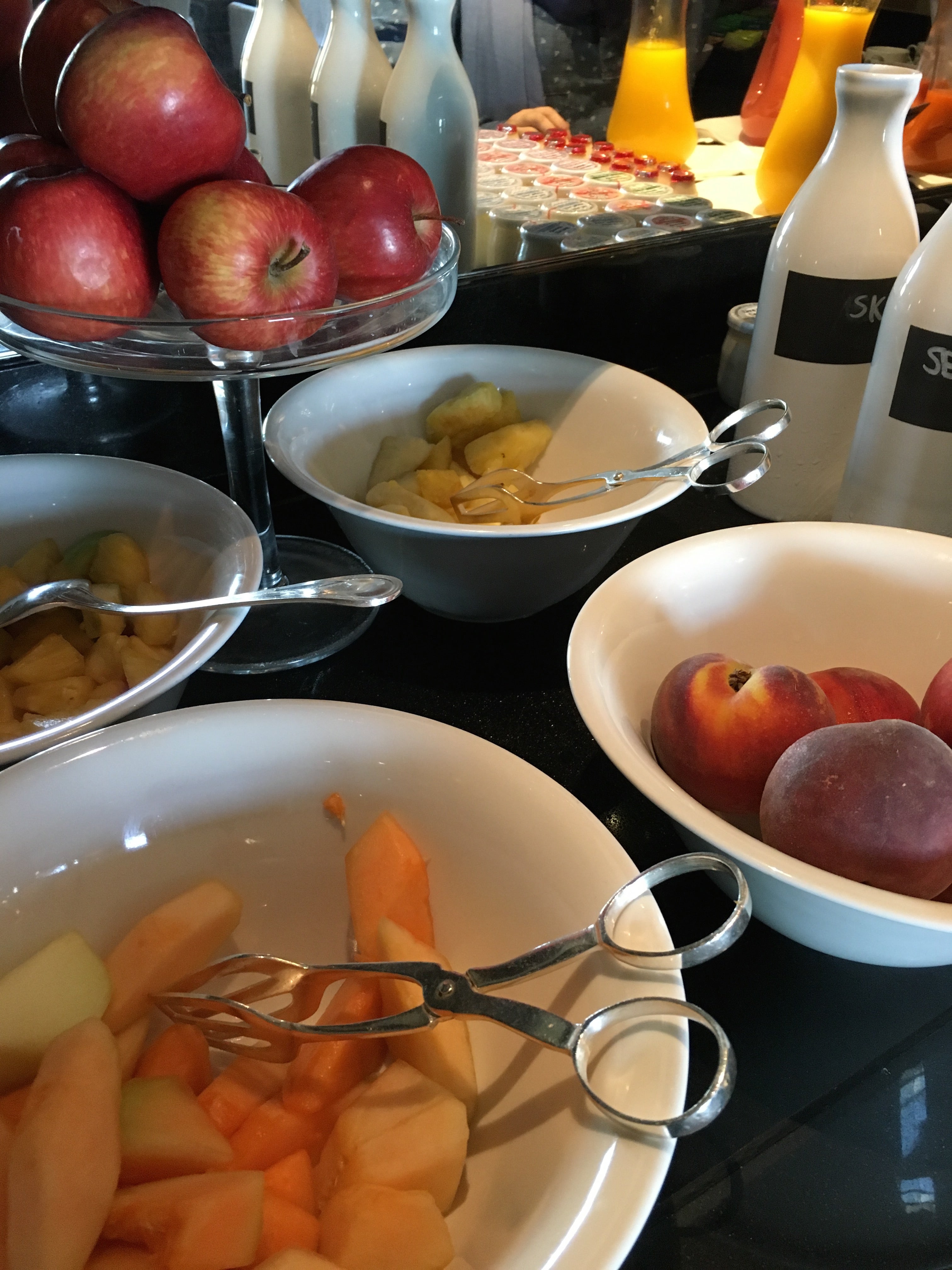 I’m going to do a separate post on the food and drinks at the Hyatt Regency Churchill, including a closer look at the lounge so I’ll skip the details here other than to say the lounge was an absolute highlight of the property. From the food and drink offerings, to the service,  to the beautiful setting, this was one of my very favorite hotel lounges of all time.

Between the food, and even just the sodas and bottled waters, the five of us saved hundreds of dollars on food and drink costs thanks to the Regency Club. 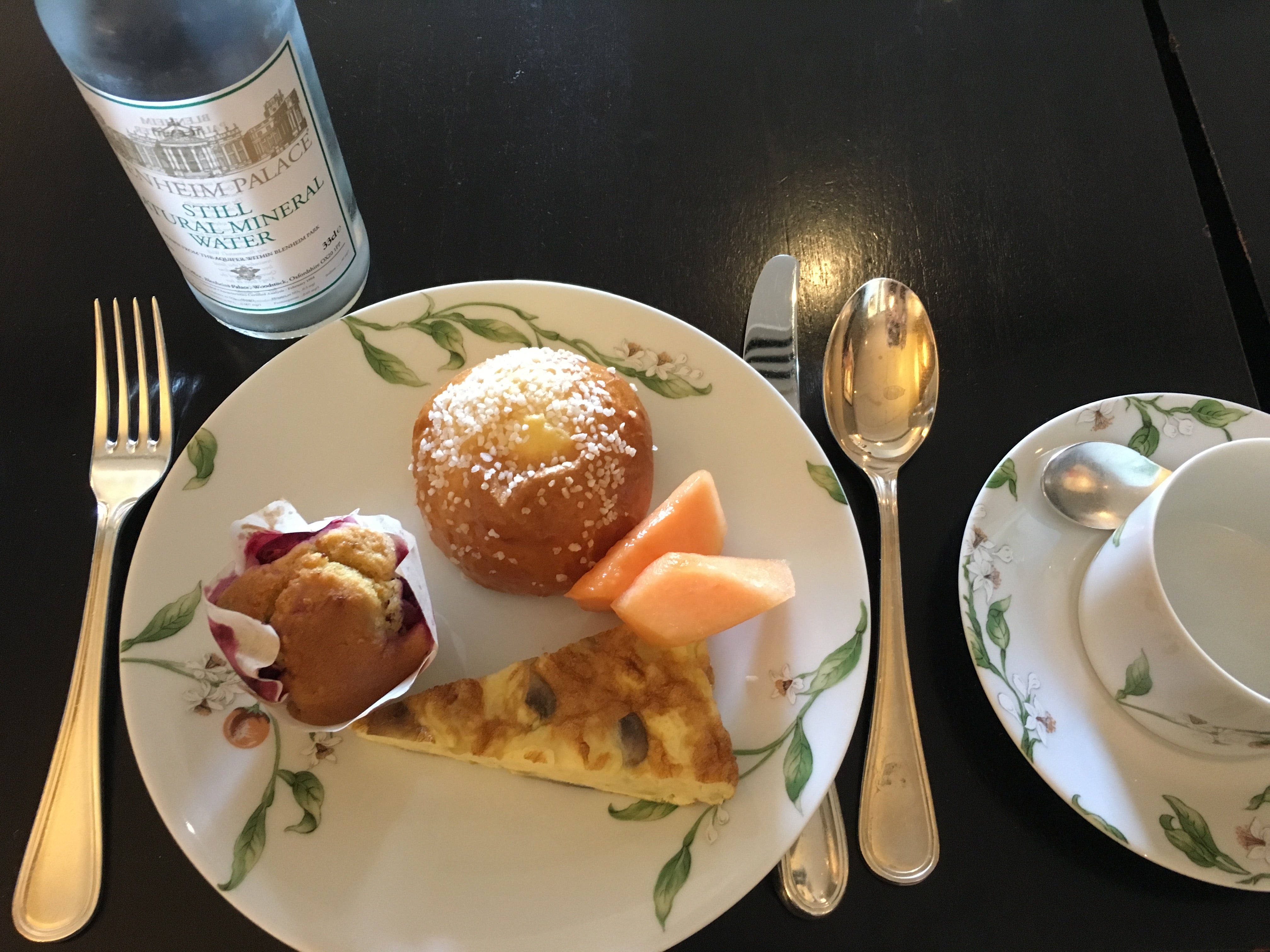 The Hyatt Regency Churchill was just a couple of blocks walk from Hyde Park, and just a 10 pound cab ride to pretty much everywhere else we went including Harrod’s and Buckingham Palace. Thanks to our short trip to London and travelers that ranged in age from 1- 65, cabs worked out great for us this time around.

The doormen at the Churchill were great at getting cabs for us, and also excelled at just making us smile when we were coming or going from the hotel. 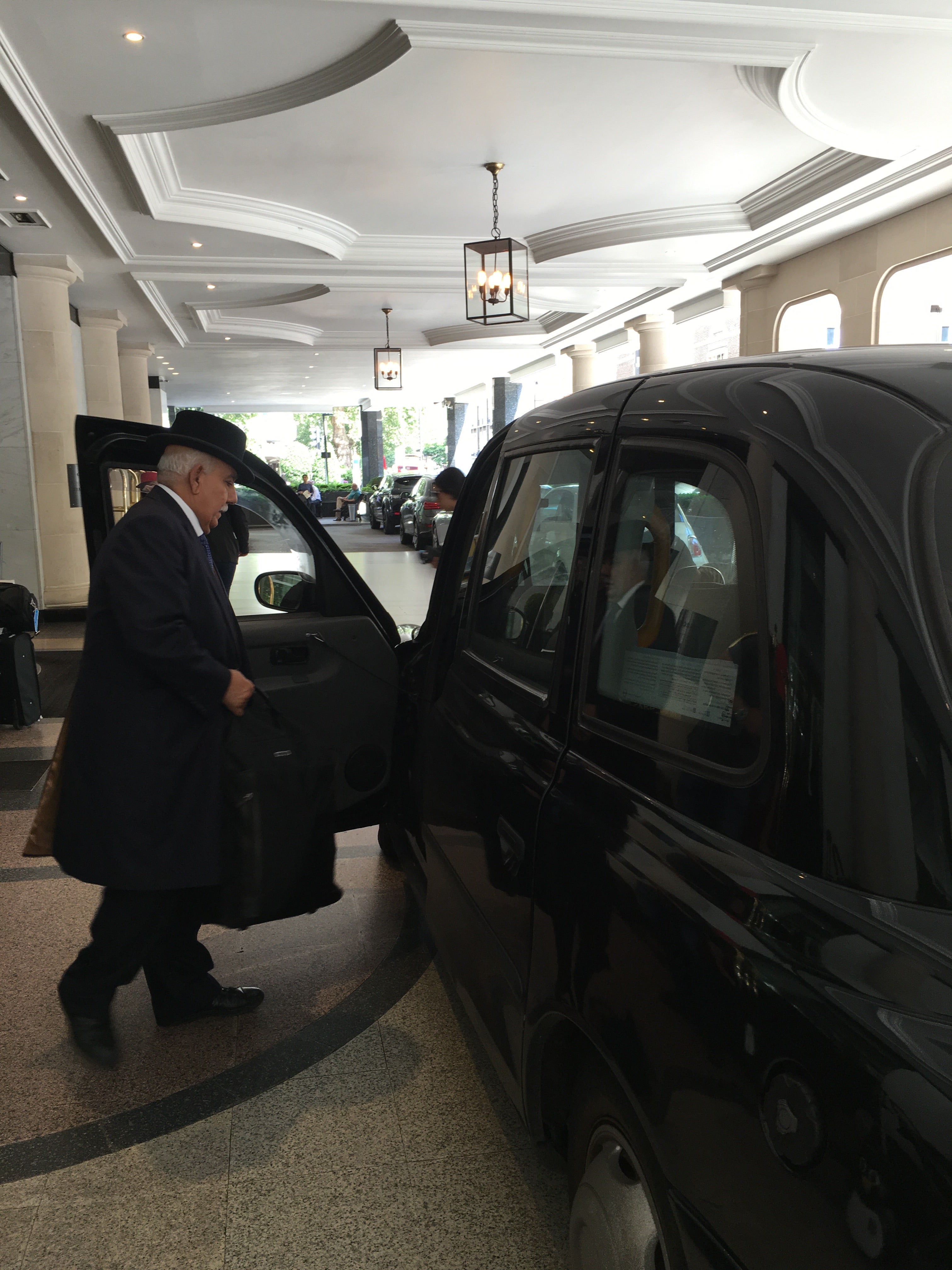 Speaking of coming and going through the lobby, don’t miss out on the cold infused water near the check-in desk. It was fantastic, and the perfect way to cool off after coming in from a London adventure. For me, it’s the little things like this that can add up over the course of a stay and take a good hotel to the level of a great hotel. 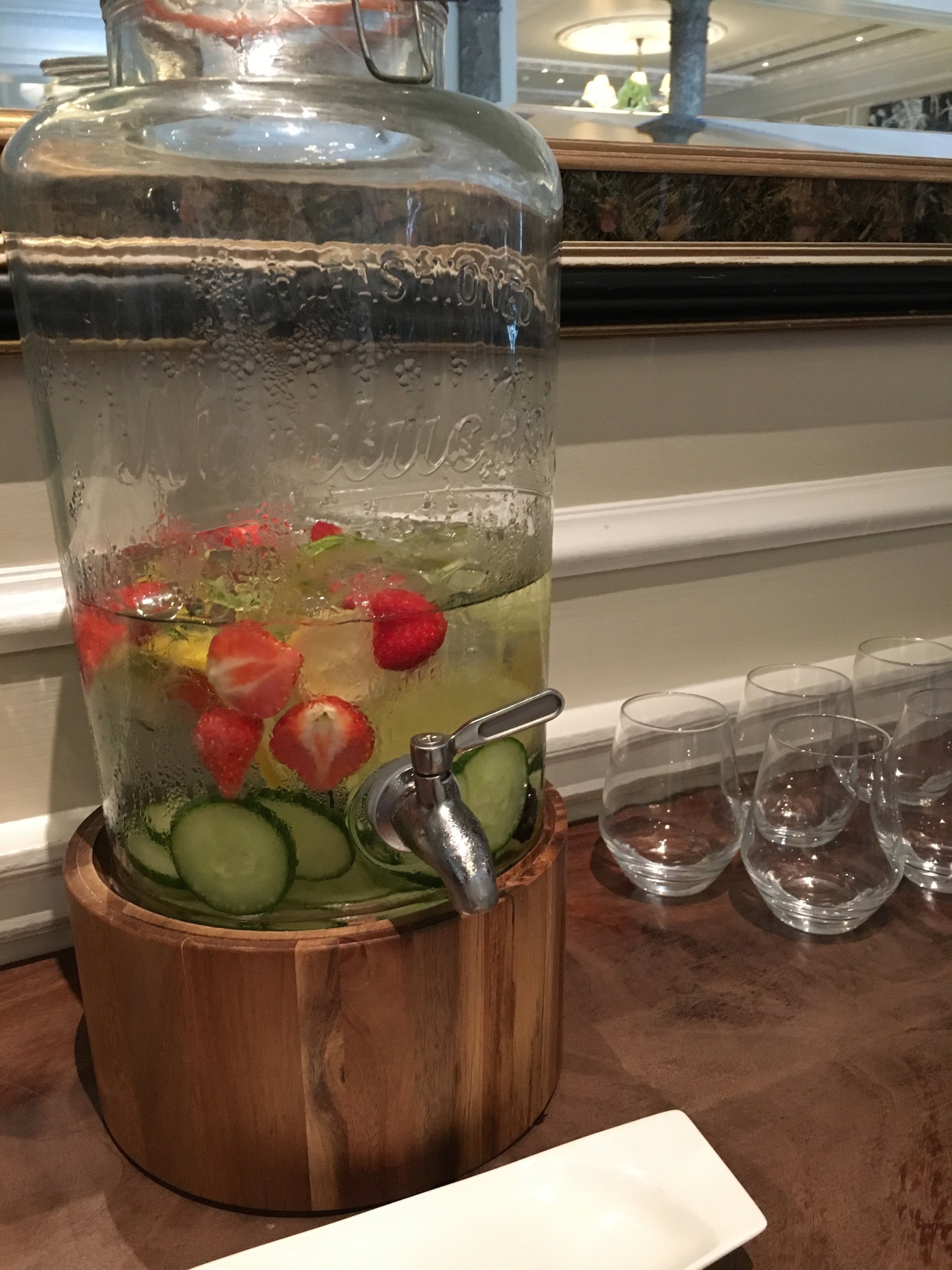 I am thrilled that I went with my gut and we chose to stay at the Hyatt Regency Churchill this time to kick off our summer trip to the UK. It was a comfortable and beautiful hotel in a solid location with excellent service. It isn’t the cheapest place to stay, but looking for deals and sales on discount sites and/or using Hyatt Gold Passport points brings it into the realm of doable for many of us. If you get the chance, go for it, and don’t miss the lounge if you can! I very much hope and plan to return in the future.

Summer Hull aka Mommy Points, ran the Mommy Points site for families who want to travel more for less using miles and points for seven years and now heads up TPG Family when she isn't exploring the world with her own two girls.
You might like
The Points Guy: Why Chase Ultimate Rewards points have been my go-to redemption method during the pandemic
News
11h ago
Great hotel, not-so-great location: A review of the Hilton Reykjavik Nordica
Reviews
11h ago
Looking for a change in scenery? West Virginia will pay remote workers $12,000 to move there
News
12h ago
Chase Sapphire Preferred® Card