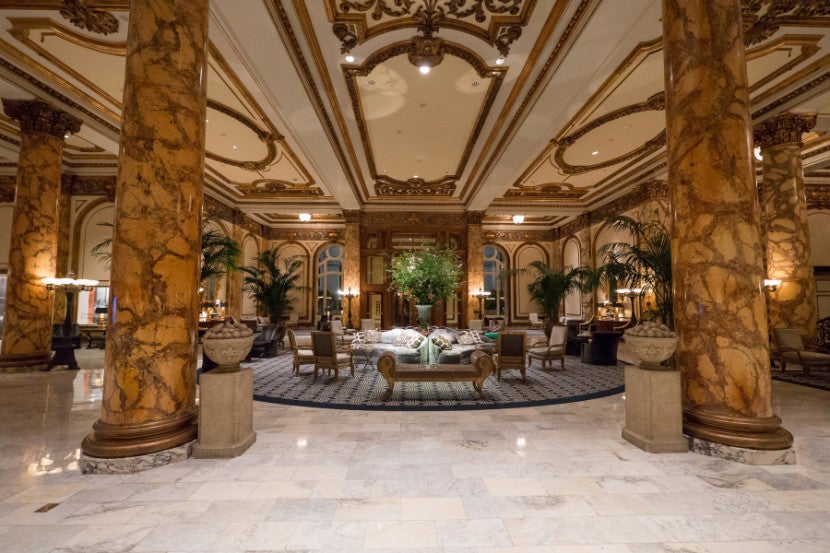 Hotel Review: The Fairmont San Francisco
This post contains references to products from one or more of our advertisers. We may receive compensation when you click on links to those products. Terms apply to the offers listed on this page. For an explanation of our Advertising Policy, visit this page.

Perched atop Nob Hill, The Fairmont San Francisco has been considered one of the most elegant hotels in town since it opened in 1907 — and after his recent stay there, TPG Contributor Leigh Rowan would agree ... to a point.

Lavishly paved in marble and gilded details, the imposing Fairmont San Francisco offers 591 guest rooms and suites, some of the best views of the city and a stop for cable cars that can carry you up and down the steep hill if you're not feeling adventurous or energetic. It's relatively close to the Tenderloin, Chinatown and Union Square's shopping quarter, and just over the next hill is Fisherman's Wharf.

I booked a one-night stay on a Sunday night through Hotel Tonight (get a $25 credit instantly by using the offer code BKELLY99), and it was $303 including tax. I used my Chase Ink Plus card (which is currently offering a sign-up bonus of 60,000 points) to pay for dinner at the Tonga Room, which netted me double Ultimate Rewards points.

Going through the doors of the Fairmont, it's like stepping back in time. Its gorgeous lobby faithfully pays homage to the Beaux-Arts ambiance of the era. Check-in is to the right, just inside the entrance, and it was fast and easy.

When I checked in, I found out that they'd already added my President's Club number to the room, and even though I booked through Hotel Tonight, they still gave me the welcome perk of free Internet. Also, I'd reserved a crib for my son, and when we got to the room it was already in there. It's Fairmont's attention to small details like these that make staying at its properties so enjoyable.

Whenever we took the elevators and walked in the hallways of the hotel, it really felt like the turn of the 20th century, both in good and bad ways. There are super-high ceilings, but also a musty smell that an old, carpeted hotel seems to have as a rule. And when we got to the sixth floor, where our room was, there was a really strong odor of cigarettes — as if someone had been smoking in the hallway five minutes before we arrived. That was a big turn-off.

Our inner courtyard room, though, smelled just fine. This category is certainly a quiet option, but note that if you're staying at the hotel atop one of the highest hills in San Francisco, you definitely want a view of the City or the Bay. We could see across to other rooms in the courtyard, but most blinds were drawn.

The ceilings were probably 12 to 15 feet tall and the room was very spacious, like hotel rooms used to be. It had a giant walk-in closet, which would be nice for a longer stay. Overall, though, the room lacked the kind of character I'd expect from a building with such good bones — instead, it felt like a big, regal box that had already seen its heyday.

This said, the bathroom was my favorite part of the hotel. At about 120 square feet, it was simply enormous, with a lovely shower and a bathtub that could have doubled as a small pool. Surprisingly, though, the hair dryer was really crappy! They also didn't have the kind of thoughtful touches I'm used to finding in luxury hotels — like Q-Tips. However, the delightful smells of the toiletries helped cover up the mustiness of the hallway.

There are three eateries at the Fairmont: the very informal Caffe Centó (for coffee, tea, beer, wine and snacks), the tony Laurel Court (with a farmers market-driven menu for three daily meals and an airy living room vibe) and the Tonga Room & Hurricane Bar, a famed institution in San Francisco. Built in 1929, the space was originally a pool called the Terrace Plunge, but in 1945 it was converted into what was, at the time, an upscale Polynesian-themed restaurant and bar. It's since been updated four times, most recently in 2009, and it's where I had dinner during my brief stay.

The latest incarnation of the Tonga Room now has tiki torches and palm thatch umbrellas over the tables, and it actually rains from the ceiling — a feature my infant son absolutely loved. There's a big central pool with a band set up in gazebo/catamaran, just floating and playing music, which is something I never thought I'd see. The sound wasn't as exciting as the visual, though, and I wouldn't go to hear this particular band again.

The Southeast Asian/Hawaiian food here is overpriced, and not very tasty. Overall the experience was ... interesting? However, if you're staying on Nob Hill, you're within walking distance of some of San Francisco's best restaurants. It's more of a place for retirees to dance to nostalgic music than a truly typical San Francisco dining experience.

If you're a particular fan of the Tonga Room, though, know that you can join Fairmont's 1907 Club, a hotel-centric loyalty program that doesn't include any room benefits, but does get you 15% off dinner in the Tonga Room and waives the entertainment cover fee. There are also discounts at the property's other eating and drinking establishments, and free parking when dining at the hotel.

I feel like the Fairmont San Francisco dazzles from the outside, but aside from its magnificent lobby, it lacks sparkle on the inside. The services and staff were excellent, and I'm sure I didn't have the nicest room in the hotel, so I'd say my experience was truly positive. However, if the room, the smells, the room's amenities and the Tonga's food were a little nicer, the Fairmont San Francisco could truly be a shining star instead of a grand dame a bit past her prime.

Featured image by The Fairmont San Francisco certainly has some sparkle, but doesn't quite shine as it could. Photo courtesy of neekoh.fi / Flickr.