Hiking and Photographing The Wave 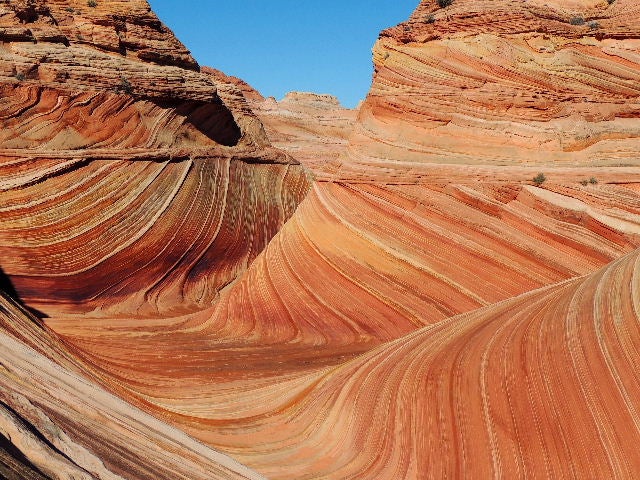 Hiking and Photographing The Wave
This post contains references to products from one or more of our advertisers. We may receive compensation when you click on links to those products. Terms apply to the offers listed on this page. For an explanation of our Advertising Policy, visit this page.

After we were selected to enter the park on a specific day via the lottery, we started reading more and more about The Wave to best prepare us for our big adventure. We learned that it is not just a stroll in a park. It is a 6-7 mile hike through an unmarked open desert in unpredictable conditions to an unseen destination.

Click here to read Part 1 of this adventure to The Wave, including using points, miles, deals, getting selected to enter via the lottery, and more.

Visual landmarks, compass headings, common sense and written instructions were the keys to a successful visit and a safe return. While the majority of hikers have no trouble, we read of many that started the journey and never found The Wave. We read of others that got lost trying, and sadly others that died. The road into the trail head is unmaintained and unpaved and can be impassable after rain. There had been several days of rain just prior to our scheduled day. It was with these facts in mind that we decided to hire an approved guide for our journey.

This was not an easy decision, but it was practical. Your permit is only valid for one day. If something goes wrong, tough luck. We wanted the odds to be in our favor. It quickly turned out to be a wise move as shortly after we got on the aforementioned unmaintained, unpaved road, we encountered a low area covered by about a foot of water. Had we not been in the guide's four wheel drive high clearance vehicle, our journey might have ended before it began. Our guide told us of other recent failures that ended up with a very expensive tow job. Our cute little rental car might have been another notch on the tow truck driver's timing belt.

We had a perfect day for the hike. The sky was clear, the wind was absent and the temperature was cool and pleasant. The hike in took about two hours and was of moderate difficulty. There was a pretty good incline through thick sand at the beginning that lasted about 200 yards. The sand had some moisture from the recent rain that firmed it up and made it more manageable. The body of the hike was on a mixture of rock and sand surrounded by sandstone hills that were a great prelude to the upcoming main attraction. En route we were shown a dinosaur print that was an unexpected bonus. The final climb to The Wave was the most arduous part as it was very loose sand with about a 30 degree incline.

However, the reward at the top was worth it. We soon saw ridged sandstone walls curling up and around like they had been sculpted. We were busy admiring and photographing what we were seeing. We said something to the effect that "this is amazing". Our guide nodded his head and said, "wait till you get to The Wave." It turns out we were sort of in the entrance hall to a spectacular living room.

For the next two hours, we took photographs from every angle, although angle is not the best term as the earth softly rolled and rose, crested and fell in a smooth, spectacular and hypnotic fashion. The Wave is a relatively small area, about the size of 1/2 a football field, but it carries a big punch.

There are other nearby attractions that play a supporting role, but the Oscar goes to The Wave. The Wave is one of the most coveted photographic opportunities because of its uniqueness and restricted access. It can offer dynamic color but its selling point is that it is like a natural roller coaster that could be called Mother Nature's Twisted Earth and Rolling Rock Experience. The ride will take you on a series of ups and downs and over and arounds. It will leave you smiling and wanting to go again.

After one last appreciative pass, we gathered our gear and headed out. It was all down hill from there to the vehicle. As we walked, we knew that we had just joined an exclusive club whose membership requirements are good fortune, opportunity and desire. We are grateful to have been so blessed and so lucky. For those of you who want to go to The Wave or some other destination, we hope fate will wave her magic wand so you too can have a dream fulfilled.

And like the Beach Boys song almost goes, "CATCH THE WAVE AND YOU'LL BE SITTIN' ON TOP OF THE WORLD".