The Best Airport Cocktails in the World 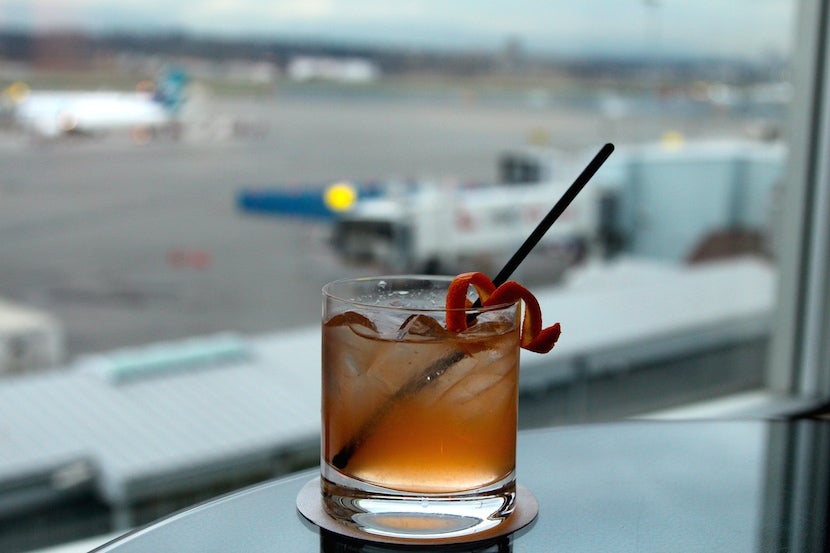 The Best Airport Cocktails in the World
This post contains references to products from one or more of our advertisers. We may receive compensation when you click on links to those products. Terms apply to the offers listed on this page. For an explanation of our Advertising Policy, visit this page.

While traveling, there are few things worse than a flight delay, but fortunately, a delicious cocktail can help ease the pain of a long layover. For travelers who are fans of a good tipple, TPG Contributor Spencer Spellman of travel/cocktail site Whiskey Tango Globetrot shares some of the world’s best airport cocktails—and where to find them.

More hotel bar than airport bar, Jetside is located in the upscale Fairmont Vancouver Airport Hotel, set inside YVR's international terminal just steps from the check-in counters. The finest cocktail here (among many), is the Célibataire (French for “single”), a Fairmont mainstay featuring bourbon, Cointreau, Aperol, lemon juice, grapefruit juice, and topped off with ginger beer.

While Runway 34 isn't inside the Zürich Kloten Airport per se (it's airport-adjacent, instead), it's far and away the coolest bar on this list, inhabiting a retrofitted vintage Soviet plane set within a refurbished hangar. I recommend settling into the plush seating area down the aisle of the plane and keeping to the travel theme with a Jetlag, which packs a sassy punch with tequila mixed with orange juice, lemon juice, and grenadine.

While Lounge 5280 has a number of classic cocktails—like a Negroni and a Sazerac—many of their cocktails are Colorado-inspired, incorporating Colorado-owned or produced products. Featuring Denver-distilled Leopold Bros. whiskey, the Colorado Crusta creates a balance of sweet and sour with Michigan Tart Cherry Liqueur, orange liqueur, fresh lemon juice, agave, and bitters.

During your next layover in Singapore, head to the rooftop pool bar at Changi Airport. (Yes, that's right—a rooftop pool bar at an airport.) The bar is generally reserved for guests of the Ambassador Transit Hotel, but for a nominal fee, anyone can enjoy a dip and drinks—like the fruity Singapore Sling. This take on the early-1900s classic nine-ingredient cocktail features gin, Cherry Heering, Bénédictine, Cointreau, pineapple and lime juice, grenadine and bitters, and is topped with a splash of club soda.

The cocktail menu at the award-winning One Flew South features everything from classics like the Old Fashioned to local twists on traditional drinks, like a Georgia Peach Bellini that pays homage to Georgia's state fruit. However, I prefer their version of the Caribbean Grog, a tiki-style punch drink, featuring a couple different types of rum, allspice, and grapefruit. It’ll make you feel like you’re on a beach until you actually are on a beach.

Cat Cora made a name for herself on the Food Network’s Iron Chef, and amongst her restaurant mini-empire is San Francisco’s Terminal 2. Many of Cat’s cocktails are locally inspired, such as the Love and Haight, named for the Haight-Ashbury district of San Francisco and featuring tequila, blood orange juice, fresh lime juice, and agave.

At Gordon Ramsay’s appropriately-named Plane Food in Terminal 5, the Through T5 is nothing short of dangerous, featuring a healthy pour of Grey Goose vodka mixed with pineapple, strawberry, and passion purée. As a bonus, it costs around $12, a relatively reasonable price for an airport bar.

Combine the culinary chops of two Michelin-starred chefs and you get Altitude, which pairs a seasonal Swiss-French fine-dining menu with classic martinis. For a buzz with an extra kick, order the Black Russian, a simple vodka martini spiked with a shot of coffee liqueur.

A contemporary Asian spot, AMS' EAST Bar and Bites uses a few traditional types of sake in several of its inventive cocktails. My pick is the Sake Mojito, which includes the usual sugar, mint, lime, and club soda found in most versions of a mojito, but substitutes the rum with sake. Arigato!