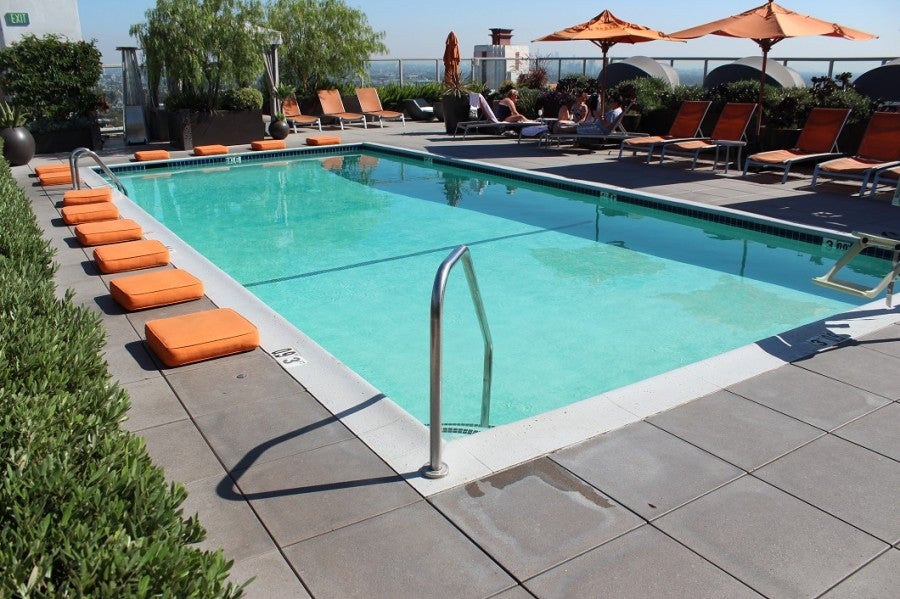 Hotel Review: Andaz West Hollywood - Room with a View
This post contains references to products from one or more of our advertisers. We may receive compensation when you click on links to those products. Terms apply to the offers listed on this page. For an explanation of our Advertising Policy, visit this page.

Update: Some offers mentioned below are no longer available. View the current offers here – The Hyatt Credit Card

While in town for the launch of the new TPG To Go App, Points and Miles editor Peter Rothbart stayed at my go-to Los Angeles hotel, the Andaz West Hollywood. Here's his review of this swank Hyatt property.

Looming over a posh, winding stretch of Sunset Boulevard, the Andaz West Hollywood is hip but elegant, and a quintessentially LA experience. Highlights of this 239-room hotel include a rooftop pool, stunning views of the city, chic furniture and artwork, and excellent service. It's not in the heart of the action like the W Hollywood (which may be a blessing or a curse depending on your perspective), but knowing the high regard TPG has for this property, I was excited to try it out.

The hotel doesn't look like much from the outside; its simple, blockish facade wouldn't be out of place in a suburban office park. Not to say it's unappealing, but it doesn't catch your eye. The interior is a different story. The main lobby features a discreetly weathered dark hardwood floor; the furnishings are hip but not too flashy. Light streams in through the front windows and gives the whole lobby a warm, upbeat glow.

While there is a more traditional hotel desk tucked away in a corner, most of the staff up front were gathered around a table with a few monitors just in front of the doors. It looked like a scene from a university computing lab, and I couldn't tell at first if they were employees, or maybe guests surfing the web while waiting for a ride. Once they identified me as a customer, however, the check-in process was the fastest I've experienced anywhere. It took about 45 seconds from when I was greeted for them to find my reservation, confirm my upgrade (thanks Hyatt Diamond status!), hand me the room keys, and show me to the elevator.

My upgrade put me into a 12th floor view room facing South-Southeast toward the Miracle Mile and downtown LA. The view was exceptional.

Adjacent to the window was a sitting area with a comfy armchair and footrest, along with a loveseat and small table, perfect for coffee or a room service breakfast in the morning. Partial shades helped moderate the brightness and temperature during the day, and a heavy blackout curtain could be drawn across the sitting area to block the daylight entirely for vampires or late risers.

I had a room with two queen beds, which still felt spacious at 277 square feet. The beds were spotless and comfortable, though at times I wished the blankets were a little thicker to fend off the overly exuberant air conditioning. (In fairness, the temperature controls were responsive, and extra blankets were available in the closet had I decided I really needed them.) Instead of a night table, a shelf ran behind both beds, with a combination alarm clock/iPod dock and ample outlets for phones or other devices. With no bedside lamp, the lighting came from overhead.

The near wall of the room had a long counter/workstation, topped with a flat-screen TV on a swivel mount, a few bottles of liquor, and some snacks. One of the cupboards had a small refrigerator stocked with beer, wine, and some complimentary non-alcoholic beverages; the other had a standard hotel safe. There was seemingly ample drawer space for storing clothes and other belongings, but some it was taken up by magazines and other clutter. The desk area was comfortable, and the strong WiFi signal made the room a nice spot for getting work done.

A closet near the entry housed extra bedding, bathrobes, an iron and ironing board, laundry bags, and ample space to hang clothes.

The bathroom was clean but unexceptional, and a bit on the small side. However, the shower was fully tiled in marble, and featured a tall shower head (which, at 6'3", I always appreciate). I'm not one to fawn over toiletries, but the Lather bath and body products (including bamboo-lemongrass body wash, mint-thyme shampoo, and yuzu-bergamot conditioner) smelled fantastic, and I made sure to petition the housekeeping staff for a few extras to take home.

One very nice touch was a list on the desk of complimentary items the hotel could provide upon request, from simple things like a toothbrush and toothpaste to less common items like a yoga mat. I asked for (and promptly received) a coffee maker along with all the relevant accessories, which doesn't come standard in the room.

Like many LA area hotels, one of the most prominent features of the Andaz West Hollywood is its pool. Located on the roof, you get great views of the city and the Hollywood hills.

Lounge chairs and pillows dot the pool perimeter, and a row of mini cabanas face out away from the pool toward downtown (and the sun). On the near side of the deck is a poolside bar with a variety of cocktails and food service. On the far side you'll find some more private seats grouped together with cabaret tables, and a larger, shaded cabana.

There were plenty of people sunning and swimming, though it never felt crowded. The atmosphere was very laid back, unlike some other rooftop pool experiences I've had. The pool is open from sunrise to sunset, and serves as a pretty good gathering spot to meet up or grab a drink.

The main dining options are the Riot House Restaurant and Bar, which you'll find beyond the elevators on the main floor. The restaurant portion is open for breakfast and brunch, while dinner is served in the bar (and via room service). There's no food service between about noon and 5:30.

I ate breakfast twice at the Riot House Restaurant, courtesy of Hyatt Diamond status. The space is airy and drenched in natural light, and the noise from the open kitchen is minimal. I was seated immediately, and service was prompt.

Both days I had the daily buffet (known as the Breakfast Table), which normally costs $26 per person and includes a variety of charcuterie and cheeses, fruit, baked goods, made-to-order eggs, and more. Minus some of the baked goods, everything was fresh and well-prepared, though the staff were slow to replace some items in the buffet line.

The hotel has room service, but hours are similarly limited to 6:30-11 am (noon on weekends) and 5:30-10 pm. The front desk offered a few local restaurant menus for late night options, but keep in mind that they'll all charge $10 or so for delivery.

The hotel sports a small but fairly modern 24-hour fitness center. Unlike some other hotel exercise rooms, this one gets plenty of daylight, and actually feels like a room you'd like to work out in. Some of the equipment needs maintenance or repair; I had trouble with several of the ellipticals, which wouldn't switch out of the lowest level of resistance. Aside from towels and citrus-infused water, the hotel provides earplugs (in case you left yours at home) and maps of nearby running routes if you want to take your exercise regimen to the streets.

The Andaz West Hollywood is a category 5 Hyatt property, so standard award redemptions are 20,000 Gold Passport points per night. The cash rate typically start at $295 per night, though there are often prepaid rates as low as $236. On the other hand, rates reach $400 and higher for standard rooms during peak dates and holidays.

At the normal rate, using 20,000 points would get you about 1.48 cents per point. Given TPG's most recent monthly valuation of 1.8 cents for Hyatt Gold Passport points, that's a below average (but not terrible) value. However, anytime the rate is at or above $360, points are a good option. You could also use Hyatt's Points + Cash option to pay $125 plus 10,000 points per night. This would be awful value for less expensive nights, but when rates are around $400, you'd be getting a very respectable 2.75 cents per point in value.

This property also wouldn't be a good use of the 2 free night certificates that come with the Chase Hyatt Credit Card. You'd be better off using those at a high-end property like the Park Hyatt Vendome in Paris or the Park Hyatt Sydney.

The Andaz West Hollywood is chic and tasteful, and would serve as a good base whether you're in town for business or pleasure. It has the sleek, understated decor typical of the brand, and you won't be disappointed by the service. The location isn't ideal if you plan to spend most of your time in Hollywood proper, at the beach, or really anywhere other than West Hollywood, but it's not terrible.

Prices are comparable to other hotels in the area, and while award redemptions aren't generally a great value, points are a nice option to have during peak times. Overall, this hotel won't blow your mind, but it will make you very comfortable. I can see why TPG favors it, and I'm sure I'll be a repeat customer.