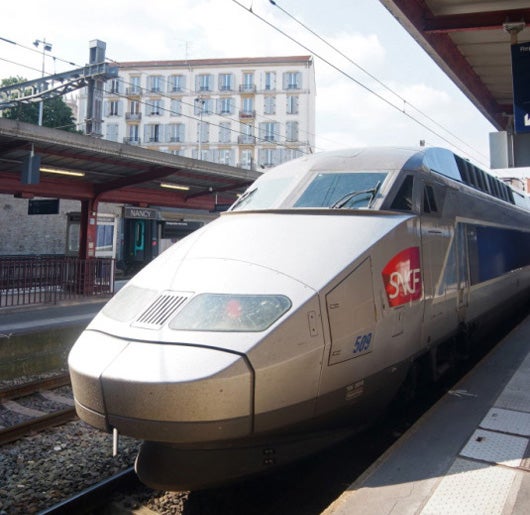 Tips for Train Travel &amp; Transportation in France
This post contains references to products from one or more of our advertisers. We may receive compensation when you click on links to those products. Terms apply to the offers listed on this page. For an explanation of our Advertising Policy, visit this page.

There's a reason the French trains are favored by locals and tourists alike—they're one of the quickest and easiest ways to get around the country. I asked Nice-based contributor Lane Nieset to fill us in on the ins and outs of trail travel in France with a guide on everything you need to know to navigate routes, fares and even ferries in France.

Driving through Provence is a picturesque way to see the countryside in France, but if you want a quick and efficient way to get from town to town, hop on the train. Not only does it mean avoiding security lines at the airport or costly highway tolls and gas, train fares are also typically lower than domestic flights in France. In this post, we'll explain everything you need to know about traveling by train in and out of France, as well as how to use other modes of transportation like taxis and ferries.

The French National Railway Operator is called SNCF, Société Nationale des Chemins de fer Français, which operates the popular high-speed train, the TGV (Train à Grande Vitesse). This train reaches speeds of 320 km (200 miles) per hour traveling to 230 destinations in France and Europe, including cities in Switzerland (on TGV Lyria), Turin and Milan (on France-Italy TGV) and Barcelona and Madrid (on the France Spain High Speed train). Popular routes on the TGV include Paris to Marseille, which takes about three hours (with rates starting around 78 Euro or $104 one-way), and Paris to Milan, which takes about seven hours (rates start around 61 Euro or $81 one-way). For train travel to London, Eurostar by SNCF offers 31 trains daily from Paris, Lille and Disneyland Paris, with travel time just over two hours from Paris (Gare Du Nord) to London. Roundtrip fares start at £69 ($115) for a non-flexible (can't be exchanged or refunded) ticket. Here are a few other train options:

One things to be aware of is that trains in France may be delayed and workers are prone to go on strike, so be sure to check the departure boards at the train station to see when and where your train will arrive. Trains don’t wait for passengers and are extremely prompt when it comes to the departure time. Give yourself enough time to get to the platform and find your car and seat because when the conductor blows the whistle, your train will be leaving the station.

You can purchase train tickets in advance and secure a lower fare online or via phone, as well as at an SNCF sales office and SNCF station. You can also book with a teller at a ticket window or at one of the ticket machines in the station before your train departs. Be sure to note the type of train you are taking (TGV vs. TER) and the class you are booking. If you book online and want to retrieve your ticket from the station, you may need a credit or debit card with a chip in order to access the ticket machines. Two cards with this chip technology (as well as no foreign transaction fee) are the Chase Sapphire Preferred and BarclayCard Arrival, and are smart for international travelers to have in their wallets. Here's how TPG used his BarclayCard Arrival Plus Chip + Pin to buy train tickets at CDG. If you purchase your ticket from the window, allow ample time since lines may be long. If you are taking the TGV Brussels France, TGV France, Intercité or Thalys, you can book an M-Ticket on your smartphone with the Voyages-sncf app that will give you a QR code for the conductor to scan.

When reserving a seat on a train, you'll have an option for first- or second-class and a seat and car assignment.While the TER trains don’t require a reservation for a seat, the TGV trains typically do. However, some conductors will allow you to pay and upgrade a TER ticket on board a TGV train. Depending on the type of TGV train you're riding, you may have the choice of sitting in the lower or upper deck if it's a Duplex train, and in first class you will have an adjustable seat, folding table, reading light and power outlet to charge your electronics. You'll also find the Bar TGV in coaches 4 and 14 if you want to purchase food or snacks, as well as alcoholic drinks after 6 p.m.

There are ways to snag lower fares with SNCF if you book early enough and keep an eye on the SNCF website for promotions.

Rail Europe offers a France Rail Pass if you plan on traveling by train to a few destinations around France. What's great about this pass is that you can choose from first- or second-class seats and decide between one, three, four, five, six, seven, eight or nine days of travel (which don't have to be consecutive) within one month. For example, a five-day pass for an adult would be about 236 Euro ($313) for second class or 290 Euro ($385) for first class. Another major perk is that the pass works on the RER Line B in Paris, which runs from the Paris Nord train station to the Charles de Gaulle airport. The RER Line B also connects to the ORLYVAL shuttle train (8.50 Euro or $11), which takes about eight minutes to reach the Paris-Orly airport. To hop-scotch from country to country by train, the backpacker-beloved Eurail Pass offers options to explore Europe with a one country passes, starting at 38 Euro ($50); Regional Passes with travel in two bordering countries, such as the Eurail France-Italy Pass starting at 201 Euro ($267); Select Passes with travel to four bordering countries, starting at 266 Euro ($353); and Global Passes with access to train travel in up to 24 countries, starting at 442 Euro ($586). Just like the France Rail Pass, you can choose the amount of days or months you will be traveling and whether you want to travel in first or second class. Keep in mind that even though you are traveling with the pass, some trains—especially in France—still require a reservation, which may be an additional fee, and can be made up to two or three months in advance.

While you may see plenty of taxis cruising by, don't expect to hail a cab like you would in New York. If you're at an airport in France, there will be an area with a queue for taxis outside of the terminal, and in cities like Paris, there will be taxi stands throughout where you can wait for a cab. Ask the hotel or restaurant to call for a taxi, or call the local taxi number and arrange for a pick up (however, you may need to speak French). Long-haul taxis from the airport can be pricy, but now car service Uber is available in Paris and in the Côte d'Azur with flat-rate fees in vehicles like an Audi A6 or BMW Serie 5. In Paris, the low-cost UberPOP car starts at a flat rate of 20 Euro ($26) from the Paris-Orly airport to the city center and the suburb of Boulogne-Billancourt or 30 Euro ($40) from Charles de Gaulle airport to the city center and suburbs of Paris, such as Neuilly-sur-Seine and Levallois-Perret. In comparison, taxis range from 50 to 70 Euro ($66 to $93) to or from the center of Paris to Charles de Gaulle airport.

For destinations you can't reach by train or that may be pricy by plane (Corsica, we're looking at you!), opt for a ferry or shuttle boat service. Saint-Tropez, for example, doesn't have a train station, so one way to reach the town is by shuttle boat with the company Les bateaux verts, departing from nearby areas in the Côte d'Azur, such as Port-Grimaud (12 euros or $16 roundtrip), a 20-minute shuttle ride away, and Ste-Maxime (13.50 Euro or $18 roundtrip), a 15-minute ride away. From Paris, one of the closest train stations is Saint-Raphaël, nearly five hours away on the TGV, with fares starting at 85 Euro ($113) for second class and 112 Euro ($149) for first class. The trip from Saint-Raphaël to Saint-Tropez by ferry takes an hour and costs 15 Euro ($20) one way. Depending on your voyage, there are plenty of ways to save while traveling by rail or other modes of transportation in France. Just remember to book early and get to the train station with plenty of time to spare. The conductors and ticket tellers in France can also be extremely helpful when it comes to assisting passengers with proper train routes, fares and reservations. Have you traveled by train through France or used a Eurail Pass before? Feel free to share any tips or suggestions in the comments section below.

Featured image by A TGV in Nancy, France. Image courtesy of Atout France/Michel Laurent
Editorial disclaimer: Opinions expressed here are the author’s alone, not those of any bank, credit card issuer, airline or hotel chain, and have not been reviewed, approved or otherwise endorsed by any of these entities.